Since we last heard from them two years ago, the Friends of Miami Marine Stadium have been making slow but steady progress.  In 2009, the volunteer group was still fighting to get local and national support for preserving this remarkable building on Miami’s Virginia Key Island. Since then, they’ve achieved something of a turnaround, with […]

Since we last heard from them two years ago, the Friends of Miami Marine Stadium have been making slow but steady progress.  In 2009, the volunteer group was still fighting to get local and national support for preserving this remarkable building on Miami’s Virginia Key Island. Since then, they’ve achieved something of a turnaround, with a new design proposal, partial funding, and most importantly, full commitment from Miami’s mayor Tomas Regalado. Their web site shows an optimistic visualization of the stadium’s glorious re-opening in December 2012 – flashing lights, boats on the water, and fireworks in the sky.

The city administration was the original bad guy in this story. The Marine stadium was designed in 1963 by Hilario Candela, and it was a very popular venue – the only one of its kind in the country – for boating events, concerts, and general water-related revelry. Elvis even shot a movie there. But when its popularity began to wane in the early 90s, the City tried to use purported damage caused by Hurricane Andrew as an excuse to demolish the structure. When it turned out that the hurricane had in fact caused no damage, the facility was shut down for lack of funds. So a building that was actually in pretty good condition was allowed to languish, and inadequate security put it at the mercy of vandals. 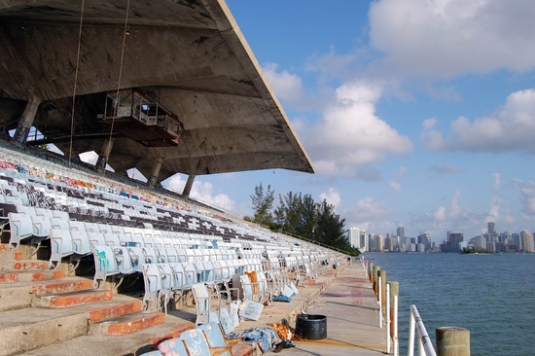 The Friends of Miami Marine Stadium was formed in early 2008. They first got the City’s Historic and Environmental Preservation Board to designate the stadium as a historical landmark, then they got it put on the National Trust for Historical Preservation’s 2009 list of “11 Most Endangered Historic Places.” But once the stadium was put on the World Monument Fund’s 2010 Watch List, it got some serious media attention. When Tomas Regalado was subsequently elected mayor, he finally reversed the City’s stand and declared that the restoration of the stadium was a priority.

Meanwhile the architect Hilario Candela, along with Jorge Hernandez, Catherine Lynn and the students of the University of Miami’s Architectural Preservation Studio, began to develop several ideas to revive the Marine Stadium. Their concepts, which were recently approved by the city commission as part of a master plan for the island, aim at immediate and practical outcomes, rather than grand gestures. 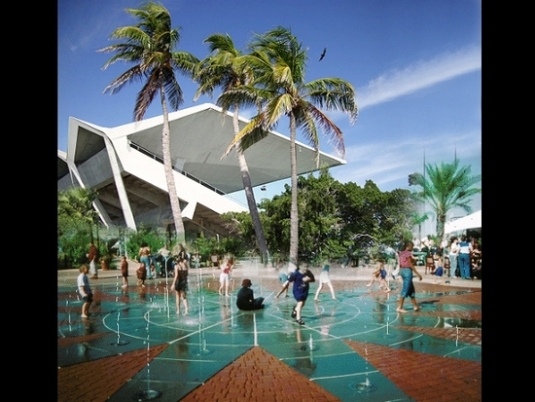 The stadium will be cleaned up, essential facilities for visitors will be added. The key element of the plan, of course, will be water. New pools and fountains will come up behind the structure, mere precursors to the brilliant blue lagoon that laps at the foot of the stadium. There might even be a floating stage on that water – a competition for the design of the stage will be announced next month. 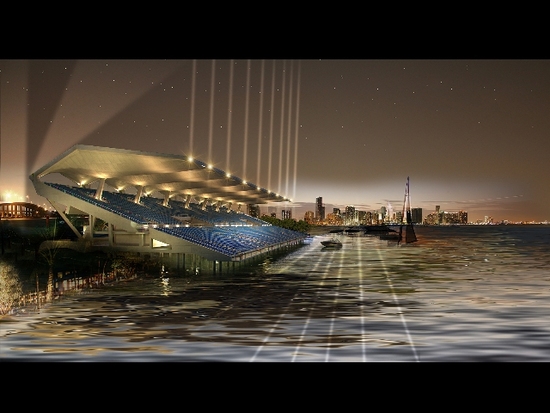 The Friends of Miami Marine Stadium already have $3 million out of the estimated $8.5 million required for the restoration. And efforts are on to raise the additional funds they will need to complete the transformation. If all goes well, they might just get that grand re-opening they want in 2012, fireworks and all.

All images courtesy the Friends of Miami Marine Stadium. Renderings by Arseni Varabyeu.