The Taxi of Tomorrow Unveiled

Photo by Ann Yuen Earlier this month Nissan unveiled its update of New York City’s most iconic moving public space: the Taxi, only a year after New York City Taxi and Limousine Commission selected the automaker, after an extremely competitive two-year bid selection process. The Nissan design, the NV200 Taxi, is the result of a research-driven […]

Earlier this month Nissan unveiled its update of New York City’s most iconic moving public space: the Taxi, only a year after New York City Taxi and Limousine Commission selected the automaker, after an extremely competitive two-year bid selection process. The Nissan design, the NV200 Taxi, is the result of a research-driven and cross-disciplinary collaboration of The Cooper-Hewitt National Design Museum, the Design Trust for Public Space, and Smart Design. At an exclusive debut of the prototype, key players in the process gave insight into how the new design pulled together almost all design disciplines—graphic, branding, product, and public space.

Graphic design played a major part in improving the cab’s exterior. At first glance, you’ll notice the adaptation of the iconic Taxi wordmark. “NYC” and “Taxi” have been dropped from the lock-up, allowing the “T” to stand alone as the mark, proving how recognizable it is. It’s also enlarged in proportion to the vehicle and is further abstracted by cropping tighter at the base. 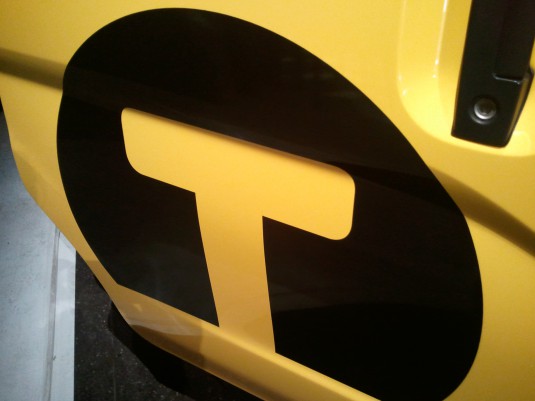 The updated NYC Taxi wordmark as seen on the NV200 Taxi.
Photo by Carli Heggen 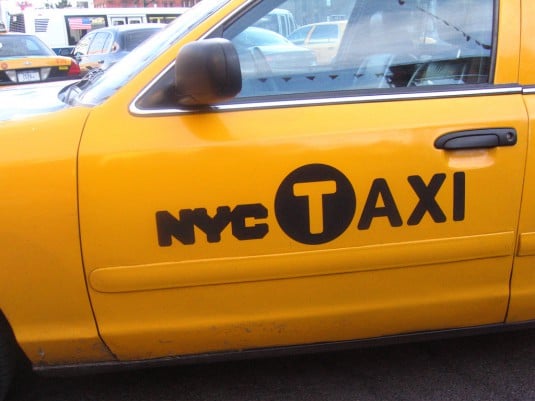 These changes create a more contemporary, refined look to the visual language of the Taxi. Understanding that the NYC Taxi is a major element of the city’s brand, the design team gave the brand the face-lift it deserves. They also seized the opportunity to create clearly communicated essential information like indicating vacancy through lighted rear signs, in addition to the roof light, and large symbols that show fare break down. 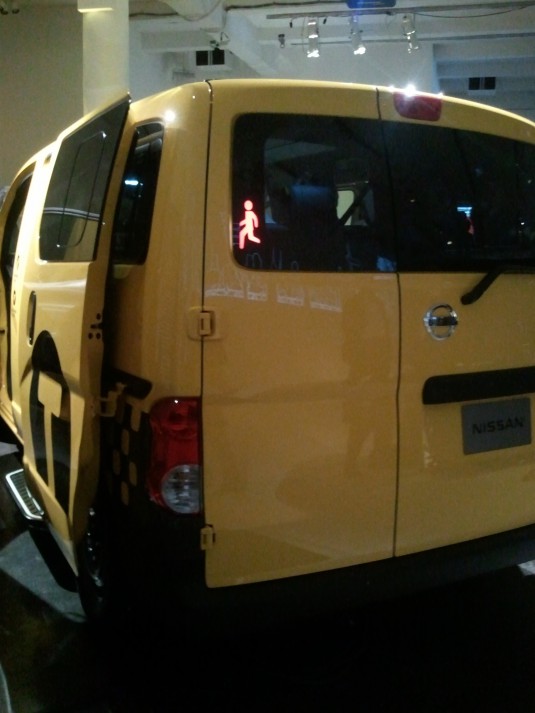 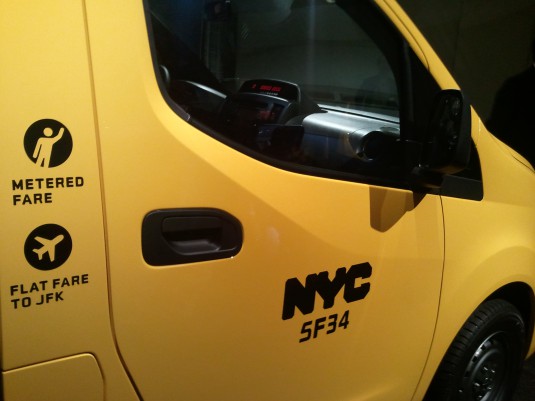 The team approached the product design of the Taxi by considering the passenger and the driver. In the past, features like the fare meter and partition were added to existing vehicles, rather than incorporated during the initial design phase. This order of operations caused negative results, like preventing the driver from being able to adjust his seat because it’s blocked by the partition.

In Nissan’s redesign of the Taxi, features like the partition and meter were seamlessly incorporated. The driver’s health and wellbeing, critical since the average cabby spends up to 12 hours a day driving, is now accounted for in the design. With the passenger in mind, USB and phone charging outlets were added. A transparent roof is designed to invite people to experience the famous verticality of New York City’s architecture. This choice also recognizes the opportunity to enhance NYC’s brand—highlighting the experience that residents and tourists alike enjoy about the city.

Design Trust for Public Space brought the urban view to the project: they asked that taxis be treated as a moving public space. It’s fitting that Design Trust, a non-profit organization that works to positively impact every New Yorker’s day-to-day quality of life, would want to improve something New Yorkers use every day in all aspects of their lives. Like in any public space, germs and odors are a major concern. The new Taxi features anti-bacterial materials on the interior (some made from recycled tires) that combat odors.

Accessibility is another issue with public spaces. To ease entrance into the cab, better handgrips and a retractable step at a lower height were installed, and the sliding door is made with lightweight materials. These features are still not enough to make the new taxi fully accessible, though. In fact, some have already protested the fact that the new Nissan model does not comply with the Americans With Disabilities Act.

At the prototype reveal it was announced that later in its lifecycle there will be a truly accessible version of the Taxi of Tomorrow, in addition to a more energy efficient edition. With all the other considerations that were made during the design process it’s a shame that these two key issues were not addressed in the first edition.

The new Taxi will start appearing on New York City roads on October 31, 2013. New Yorkers and the world will be anxiously waiting.