The Trouble With Trade

Nearly 80% of all the world’s industrial goods will travel through the commercial shipping industry at some point in their material lives, mostly on cargo ships. A 1,000 ft (305 m) cargo container ship weighs 34,000 tons and on average carries 2,500 containers, traveling 480 miles a day. Such ships will burn 14,400 barrels of […]

Nearly 80% of all the world’s industrial goods will travel through the commercial shipping industry at some point in their material lives, mostly on cargo ships. A 1,000 ft (305 m) cargo container ship weighs 34,000 tons and on average carries 2,500 containers, traveling 480 miles a day. Such ships will burn 14,400 barrels of diesel fuel in one month. In addition, empty cargo containers, accounting for a third of the shipments made per year, will spend much of their time docked at some port. Could there be a better use for these oversized paperweights?

With these questions in mind, this January I boarded a cargo container ship, anchored at Port Elizabeth, N.J., to do some investigating. A typical American shipping port is essentially a collection of container crates arranged like boxes in the cereal isle of the grocery store. From a design standpoint, I found this agglomeration inspiring. It was amazing to see all this ingenuity, people, and time dedicated to managing a simple steel box.

The goal for my visit was to experience cargo shipping first hand and then to conceive some way to improve its efficiency. Once on board I spent most of my time learning about standardized shipping, and interviewing the crew who knew all about the inefficiencies they live with everyday. Everyone agreed that the container is the culprit: “It’s completely useless for more than half its damn life, then, after they’re done, no one wants them,” one said. “It costs more to ship them back than it does to make them, the ports can only stack them so high,” added another.

I was surprised to hear so many complaints about the containers, especially since the ship we boarded was a steam-powered rust factory from 1973.  I was told that such steam-powered vessels are among the longest lasting type of boats, not to mention most expensive. I discerned from our conversations that creating a new ship that incorporates some green technology to improve fuel efficiency would be counterproductive.  And that a better idea would be to devise an improvement for the cargo container.

As we reached the middle of the Atlantic Ocean, I sat down with some engineers to ponder a new concept. Our aim was to design a symbiotic relationship between the container, the ship, and the port. The outcome was relatively simple, and did not require any part of the existing system to change. Our container would be retrofitted with a series of flexible photovoltaic panels between its corrugations. This array would be located on the top and sides of the container, and would connect to a tangent container.  The PVs would power the lights aboard the vessel while in transit, as well as at port. 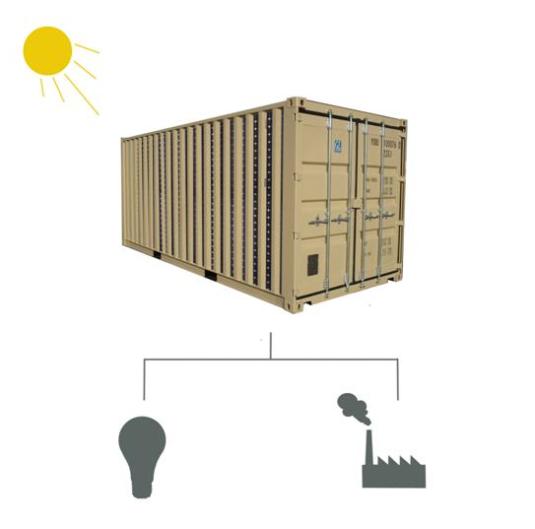 I am not suggesting that this is the best solution to the cargo ship dilemma. All I want to do is capture the attention of the design community and provoke a conversation about one, particular environmental menace.

The cargo container is a resource that has been used to build all kinds of low-cost structures, yet I believe its best use is as the salvation of the commercial shipping industry.  This article is meant to shed light on a real predicament, and to inspire those who are interested in solving it.

Matthew Kihm, 22, is an industrial design graduate from the Rhode Island School of Design, where he also read science, and took collaborative classes at the Massachusetts Institute of Technology (MIT). This, he says, gave him an understanding of design from a scientific standpoint. His goal is to use this dual interest to not merely create products but also improve America’s infrastructure.