The Winners of Archiprix International 2009

Discover the innovative projects that won this year’s international biennale

The world’s best architecture, urban design, and landscape architecture graduation projects have been chosen and the task was not easy. The international panel of judges for Archiprix International, which consisted of Salvador Schelotto (Dean farq, UdelaR, Uruguay), Mario Schjetnan (Mexico), Anne Lacaton (France), Juan Herreros (Spain), and Sou Fujimoto (Japan), examined 218 submissions from 66 countries. They nominated 24 projects as finalists and from this selection they picked the projects that would ultimately win the Hunter Douglas Awards.

Eighty participants whose graduation projects were part of this year’s Archiprix gathered in Montevideo, Uruguay to participate in a week-long workshop and the awards ceremony. The international assembly worked all week in the coastal city to generate ideas that could connect the city’s under-used waterfront to its inhabitants and to potential tourists. The projects wildly varied amongst the seven groups and were described in 15-minute presentations. One group planned an ambitious overhaul to the city’s identity; another group, using local materials to build models, proposed specific landmarks (even suggesting the creation of zeppelin docking stations along the coast); and another group went directly to the people to ask what they want soliciting comments on a blog and cell phone they left to a city official. See all the workshop’s results here.

The awards ceremony took place last Friday at Teatro Solis and both the competition participants and the architects on the Hunter Douglas Excursion were in attendance. 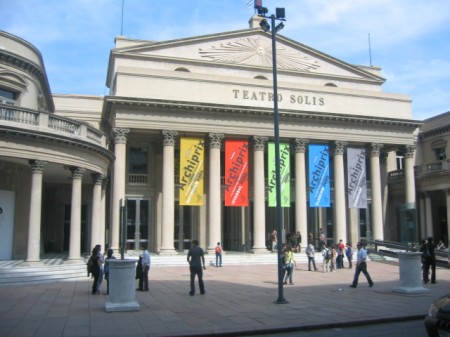 A short introduction on the urban design of Montevideo was given by Mariano Arana, the senator of the Republic of Uruguay. And lectures were given by architects Marcelo Ferraz, Ruy Ohtake, and Bjarke Ingels. Brazilian architect Ferraz discussed the importance of contextuality and preservation and the co-existence of architecture, technology and materials. He used one of his recent projects, the Bread Museum, as context for his discussion. As a counterpoint, Ohtake, a Brazilian architect of Japanese descent, talked about the importance of using your own convictions (“Experts are obstacles!”) and challenging the architectural status quo. He used his distinctly designed design Hotel Unique in Sao Paulo as an example (Paul Goldberger refers to this hotel in the 2004 article, The Next Seven Wonders). Ingels and his colleague wowed the audience with video presentations of their completed works and large-scale proposals such as the Danish Superharbor and The Seven Peaks of Azerbaijan. 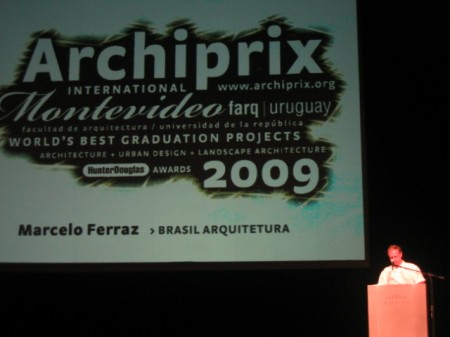 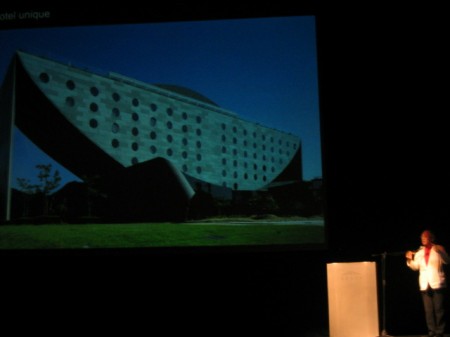 Ohtake shows off his Hotel Unique 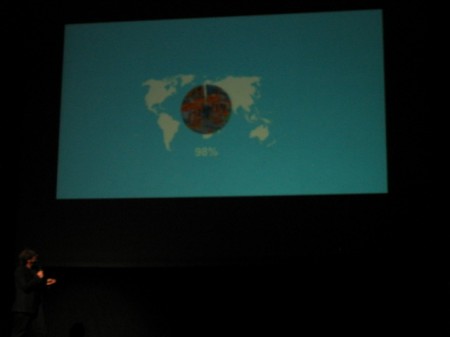 Ingels gives a virtual tour of the proposed Danish Superharbor

Finally, the awards ceremony began and Thijs Asselbergs, chairman of the Archiprix Foundation, astutely pointed out each of the 218 participants’ submissions were already award-winning. They truly represent the “best of the best” graduation projects from around the world. But what follows are the eight selected projects for the Hunter Douglas Awards:

“‘Urban MA’ gives us a sense of proper distance and generates interaction between us…By stacking the pencil buildings, ‘urban MA’ which had been two-dimensional, is transformed into a three-dimensional structure.”

“Given it’s importance as a cultural landscape, the Universidad de Atacama in conjunction with the Municipality of Tierra Amarilla launched a preservation program to convert the ‘Transito’ mine into the first mining museum in Chile.”

“Every city forms a system, and every system produces deviations…We need to find a new approach suited to coping with the challenges of our time, so that the city can reacquire its dynamic properties.”

“this is the story of a deeply rooted tree, growing in the soil in the middle of a missing Old Monastery site. It is about recovering craft activities inside and generating new spaces for the city on the outside.”

“”By gathering together retired barges, ships for water transportation, we can also use these vessels as facilities for exhibition space and for studios for artists. Barges have large holds and, as such are mobile rooms.”

“The MetroMarket Network is designed to facilitate this uniquely Shanghai-based mode of modernization, using a ticketless platform principle. The tradition of specialized market trading, the last vestige of the ragged entrepeneur, is incorporated into the infrastrcuture of the Megacity.”

“[The ‘Russian’ market] functions as a gateway between the city center and the area beyond. The market is an important factor in Tallinn public life but due to its marginal character and the upgrading the surroundings, it is likely to vanish in its current form.”

“The half-finished land reclamation, which was meant to be a recreation and natural area, has becomea  dying eco-system. It is remarkable that nothing has been done about the damaged Markermeer site, knowing that it would be relatively simple to recover it.”

Learn more about all of the submissions at the Archiprix International Web site or order a copy of the 2009 Archiprix catalog published by Dutch-based 010 Publishers – it contains a comprehensive collection of this year’s projects. A DVD, that’s included with the catalog, allows you to see the projects in a slideshow format. 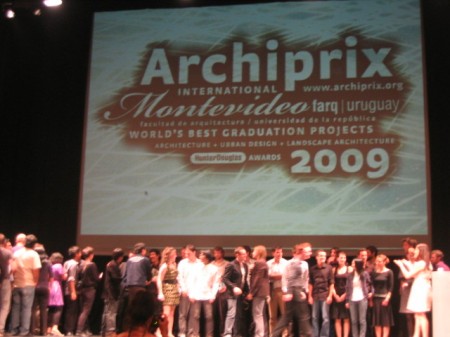