Drywall, crew changes, color, and more from another week on site in New Haven.

Every Monday until mid-August, first-year graduate students at the Yale School of Architecture are blogging about their progress building an affordable, accessible owner-renter residence in New Haven. Click here to read the previous posts.

The most conspicuous change this week was that thirty-four of us stopped showing up, entrusting the completion of construction to our fourteen remaining esteemed colleagues. From now until classes begin again at the end of August, Beth, Daniel, Emma, Frances, Jacob, Justin, Kipp, Lindsay, Marija, Mark, Melissa, Tom, Vivian, and Will will work 7 a.m. to 5 p.m., Monday through Friday. Small groups of two or three will focus on different parts of the house, like the front porch, or the kitchen, or the back yard, and will make final decisions on the details of construction and finishes. And they’ll get paid! 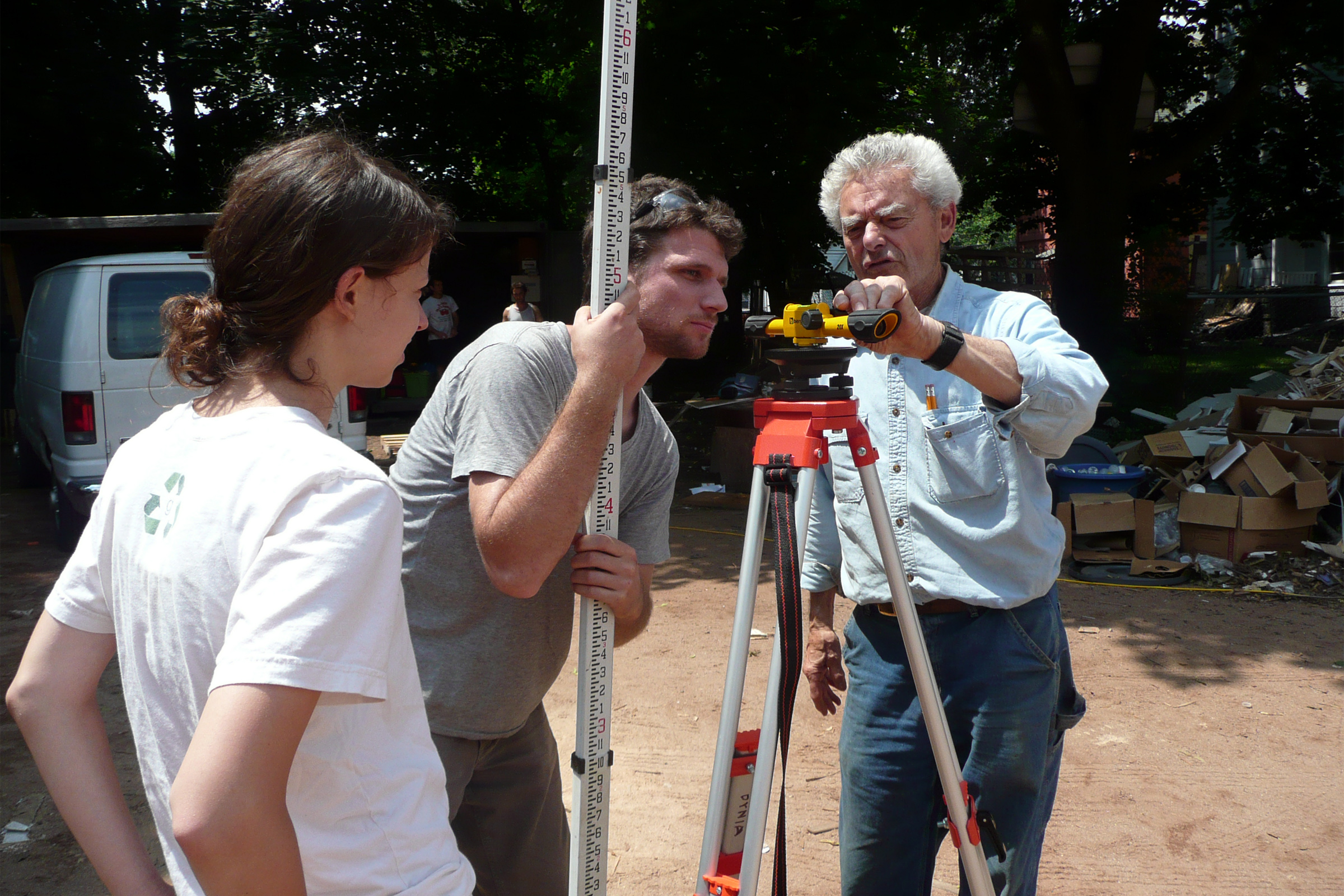 Site specialists Marija and Daniel get ready to survey the back yard. Photos: courtesy the Vlock First Year Building Project 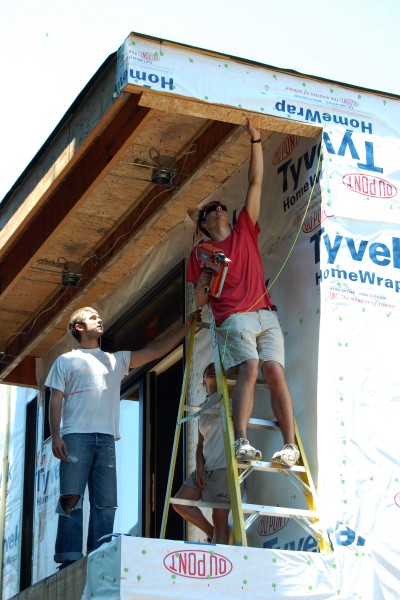 Drywall is a bittersweet thing, I’ve learned. True, it makes rooms feel like rooms and makes the light bounce around in a lovely way. But on my last official day on site, some of us mourned the drywall’s inevitable elimination of the passage of light and shouts between the owner and tenant units. We noticed a particularly perfect view from the tenant apartment through the studs of a closet and through the long skinny window of the owner’s living room that framed the trunk of a tree in the back yard. It was beautiful. And no one will ever see it again! We didn’t even get a picture before it was covered up.

Please destroy the wall in the back of the closet just to the left of the top of the stairs in the apartment. It’ll be great! Really! 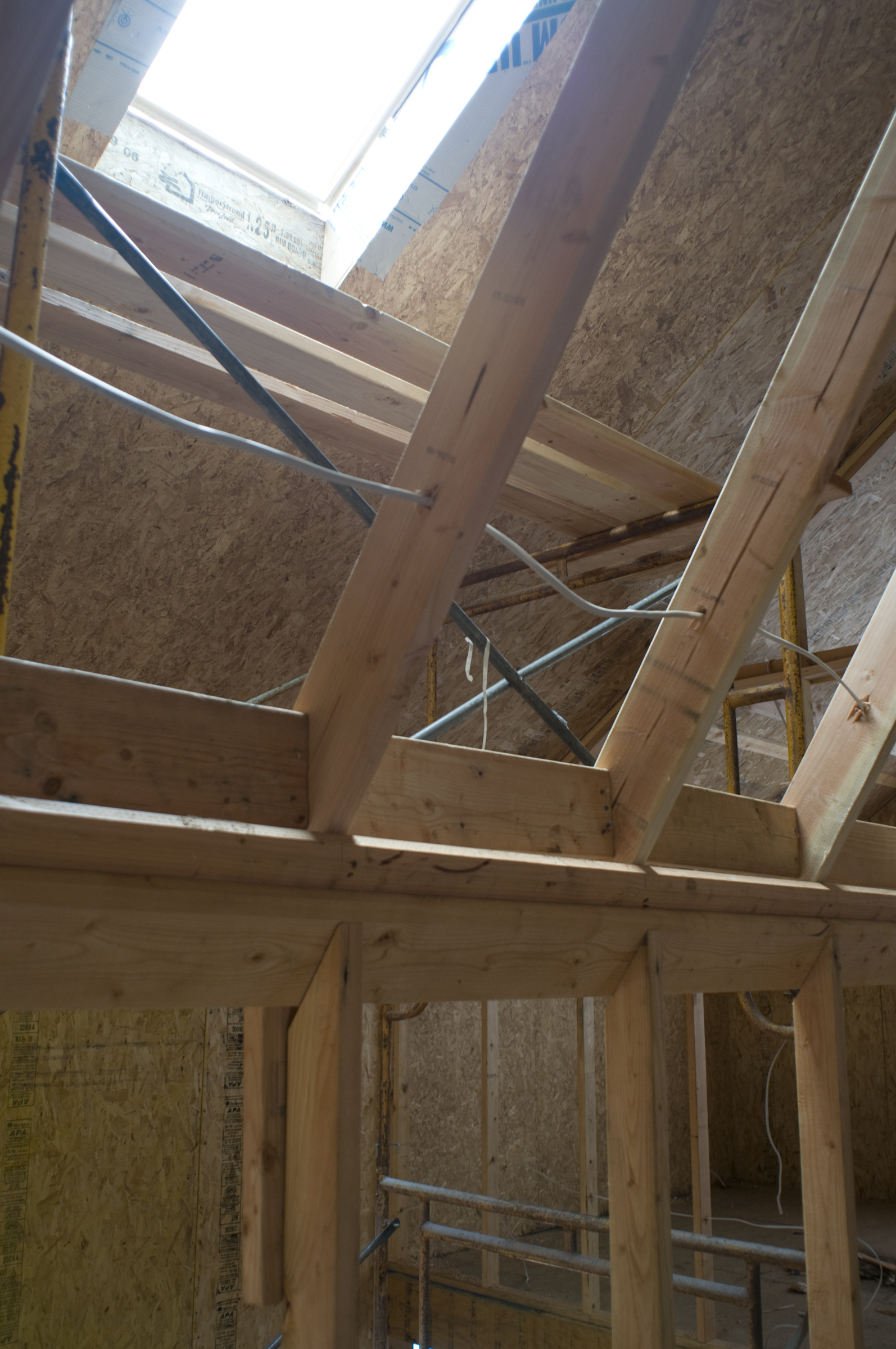 Light from the skylight over the owner’s living room enters the tenent unit. 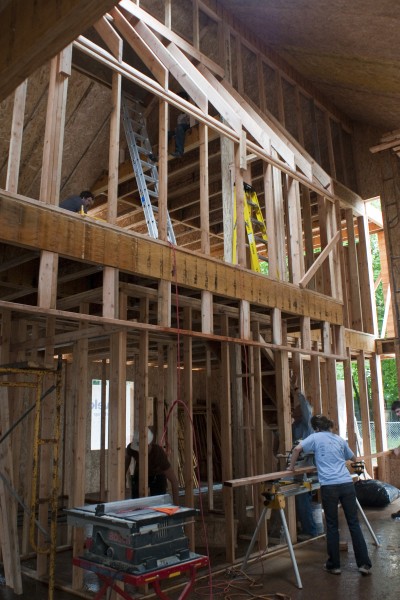 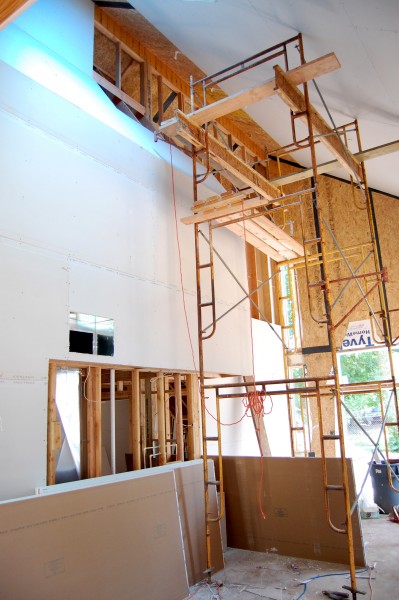 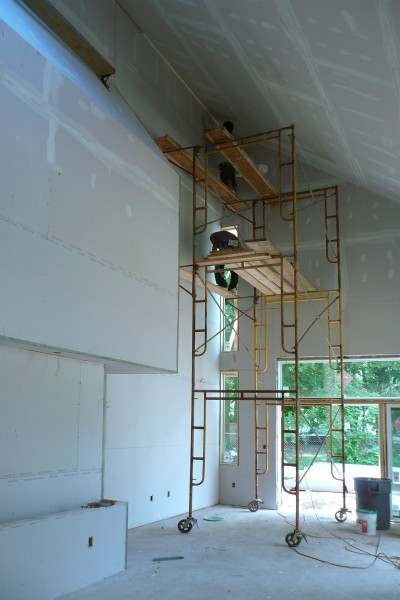 The drywall installation is one of the only major tasks completed by subcontractors and not students. We would just make a mess.

3. SOMEONE MAKES BACK STAIRS.

Thanks to the drywall’s segregating effects, one can no longer hop directly from the tenant’s stairs to the owner’s living room, so a set of temporary stairs have been installed from the tenant’s back door (about four feet above grade) down to the ground. These will eventually be replaced by a small landing and a set of (probably) cast-in-place concrete steps that will run parallel to the back of the house. Some might not consider the construction of these temporary stairs to be a Significant Occurrence, but they probably didn’t experience the pirate-ship-esque plank that preceded them. 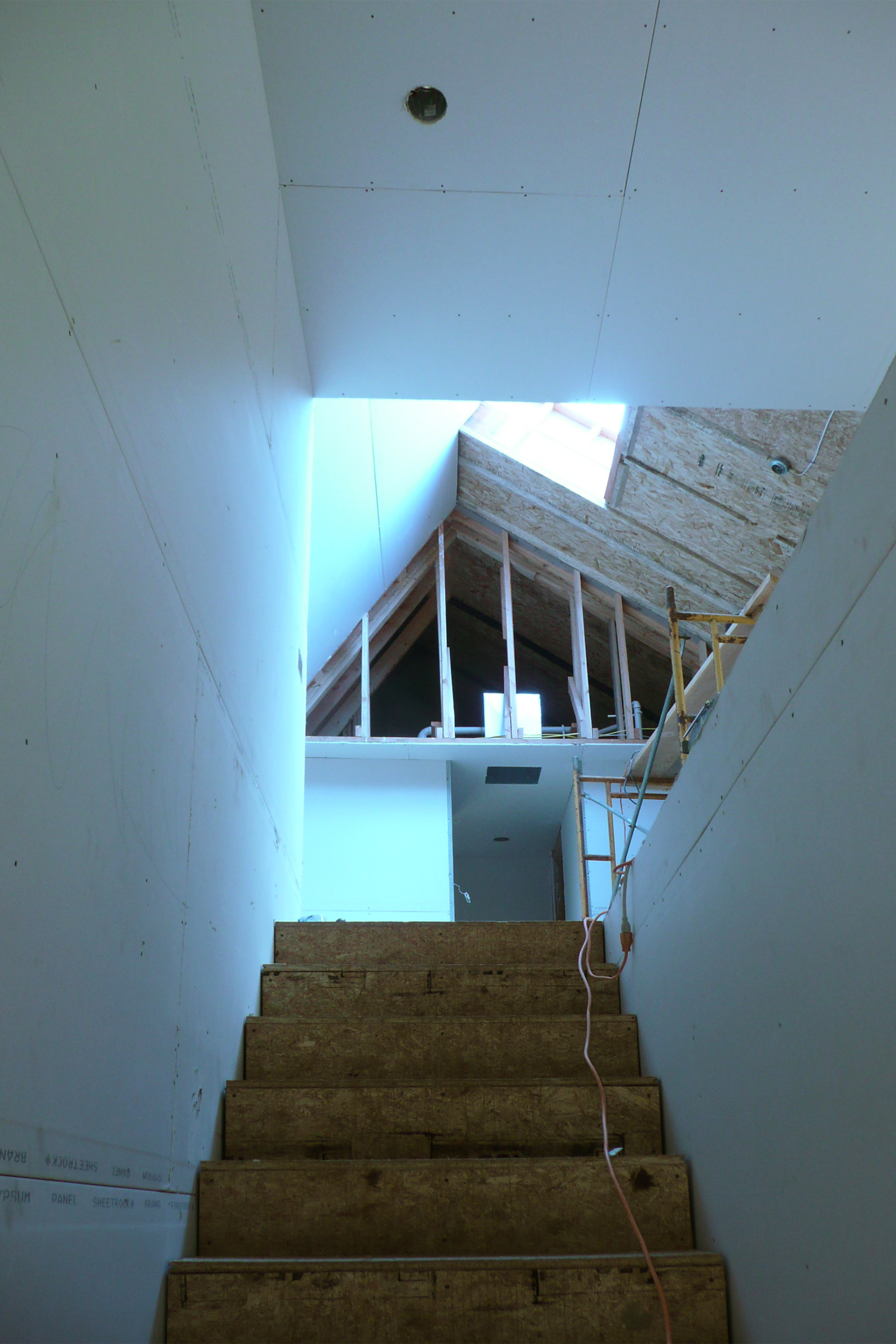 The view up the tenant’s stairs

Perhaps the most exciting Significant Occurrence of the week was the arrival of our roofing material. After a week of delays and much anticipation, a teeny little truck showed up on site carrying in its trailer a roll of champagne-colored* sheet metal. In what was quite a spectacle, the metal was efficiently unrolled, crimped, and cut into perfectly sized panels, to be clipped together on the roof next week.

*Quite a bit of debate has swirled around whether or not the color of the roof is actually anything like champagne, as the manufacturer’s catalog suggests. I’d say it’s pretty close. 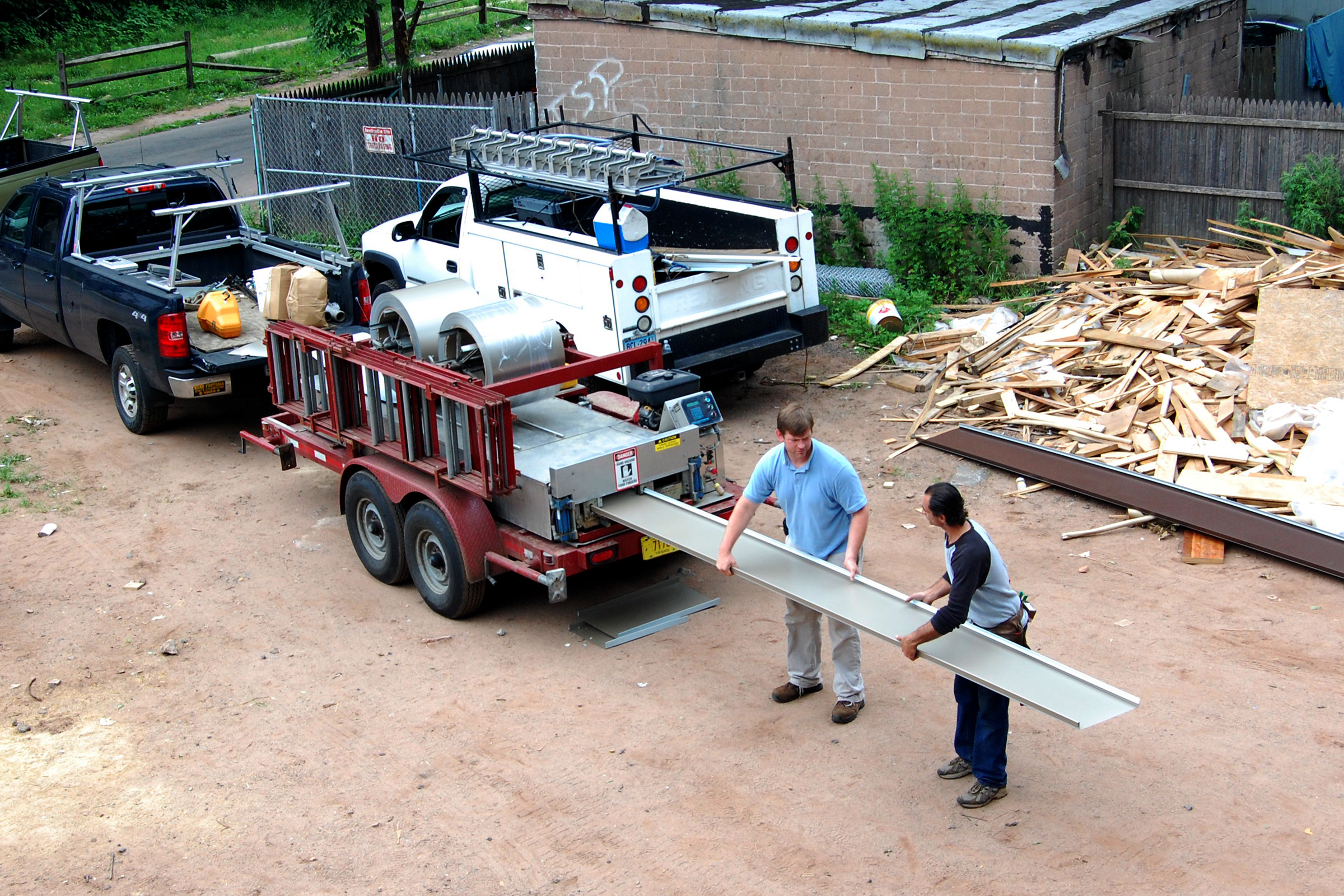 The metal roofing material rolling off the truck 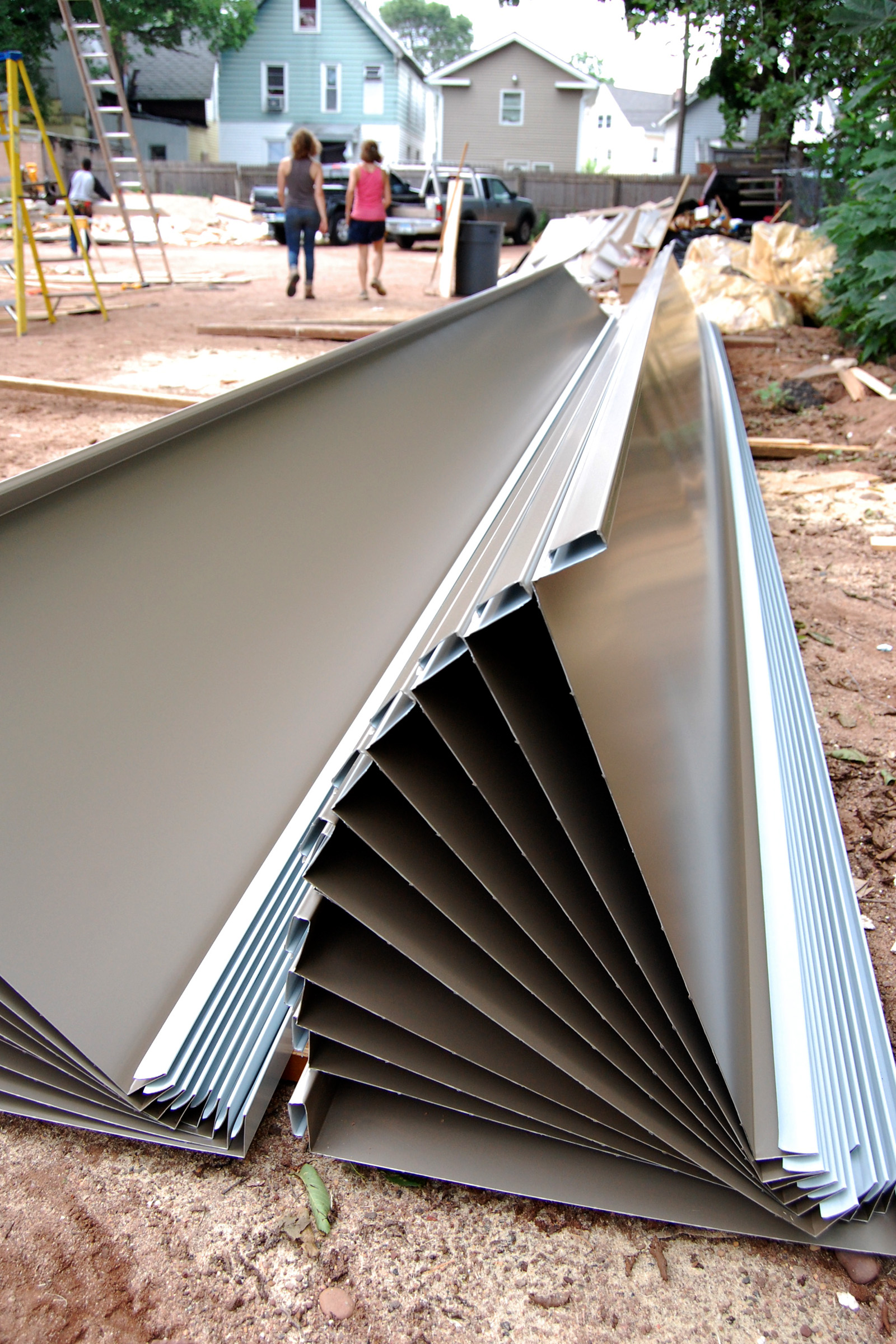 Roofing panels ready to be installed

A few members of the crew tested grey paint contenders on the wood siding that will cover most of the house’s exterior. The discerning members of the crew voted on the most delightful of the four options: Plateau Grey. Next week will bring the daunting task of painting every one of those nine hundred or so pieces of wood siding. 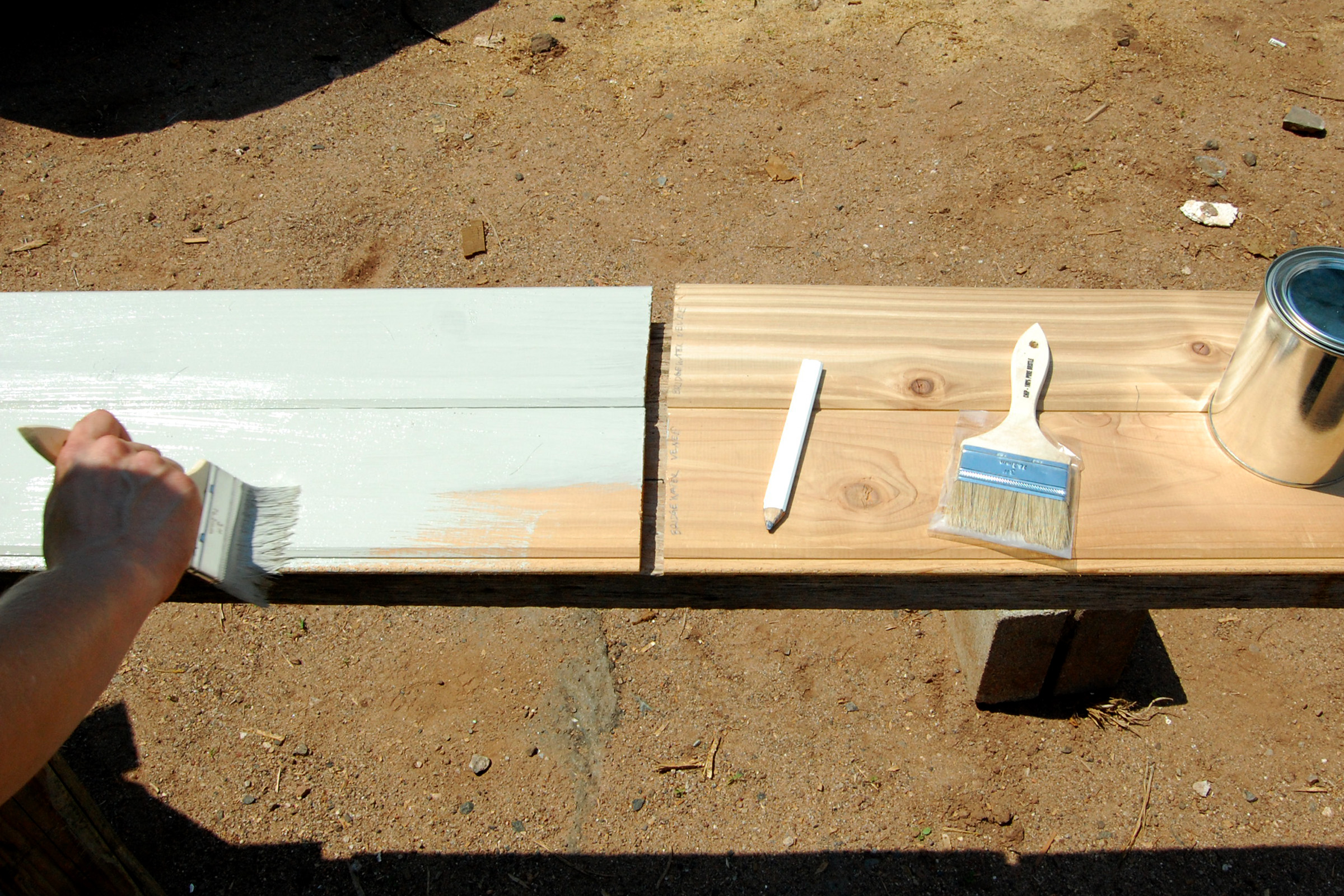 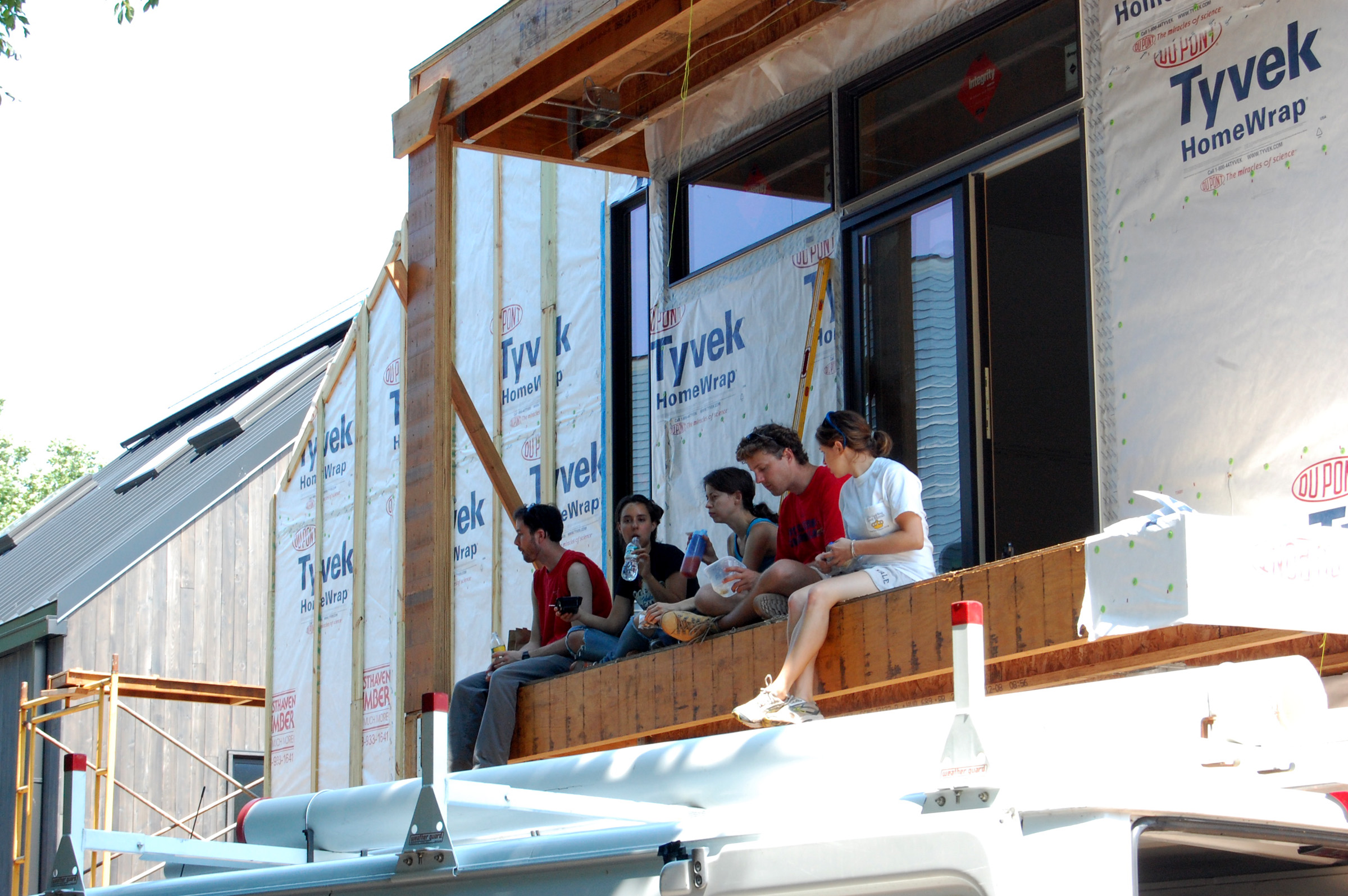 Tom, Emma, Marija, Will, and Lindsay take a break for lunch on the tenant’s balcony.

After a miserable month of clouds and rain and cold, New Haven celebrated the return of sunshine. Average temperatures rose more than two degrees this week. It’s about time.
The Vlock First Year Building Project is partnering with Common Ground, a national supportive-housing developer, and the Connecticut Veterans Administration to build affordable, fully-accessible housing for female veterans. Check back next Monday for the eleventh installment of the students’ weekly blog for Metropolis.