The student-builders move on to the next frontier: specialization.

Every Monday until mid-August, first-year graduate students at the Yale School of Architecture are blogging about their progress building an affordable, accessible owner-renter residence in New Haven. Click here to read the previous posts.

The siding saga has finally come to a close. Perhaps more momentous than nailing in the final ridge pieces on the front of the house was taking down the scaffolding, revealing the fruits of our labor. This was the first time we were able to stand back and view the entire house with the siding in place, taking in the sea of Plateau Grey. With the few remaining patches of Tyvek covered over, few of us will miss the paint-crusted rollers, the sawdust of the chop saw, or the balancing act on the scaffolding. Like it or not, the so-called siding blitz is over.

With this mammoth task behind us and the interior entirely painted, the beginning of this week brought a new flavor to our workday: specialization.

We started Monday morning by drawing up a list (on a scrap piece of drywall, naturally) of all the remaining items to be built, installed, and, yes, even designed in the four weeks we have left to work on the house. Even the largest tasks could now be managed by a few students, as opposed to the entire work crew. By a show of hands, we were able to break into smaller groups and take on responsibility for specific areas.

Leading the charge of the specialty teams are the plywood masters, who have certainly earned the title. This crew of three has already completed the kitchen ceiling and front porch in the owner’s unit, in addition to the living-room ceiling and balcony in the tenant unit. Having mastered the plywood installation, the team tackled the living room in the owner’s space–a double height, wood-covered wall. Their task was not an easy one: that wall hadn’t been fully designed and drawn-up until after the Sheetrock installers had come and gone. The first order of business was to frame out and sheathe the top and bottom bump-outs on the wall–involving the familiar task of laying plywood, only this time it was vertical. When the team reached the windows, however, it was faced with a detail that had never been specified in the drawings: how to make the plywood meet the frames of the windows. The team made the design decision in the field and produced a seamless detail of wood running into glass by adjusting the drywall around the windows to make them appear frameless. Once the plywood masters finish the living room wall–and they are very, very close–they will move on to the wood wall in the dining area. 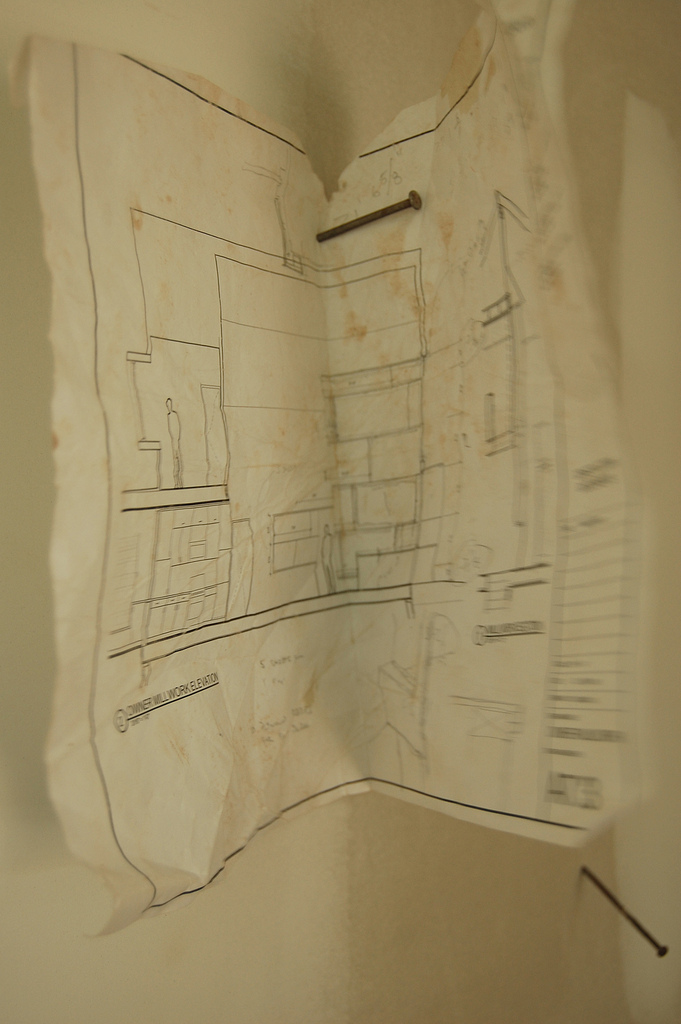 Remnants of the living-room elevation drawing 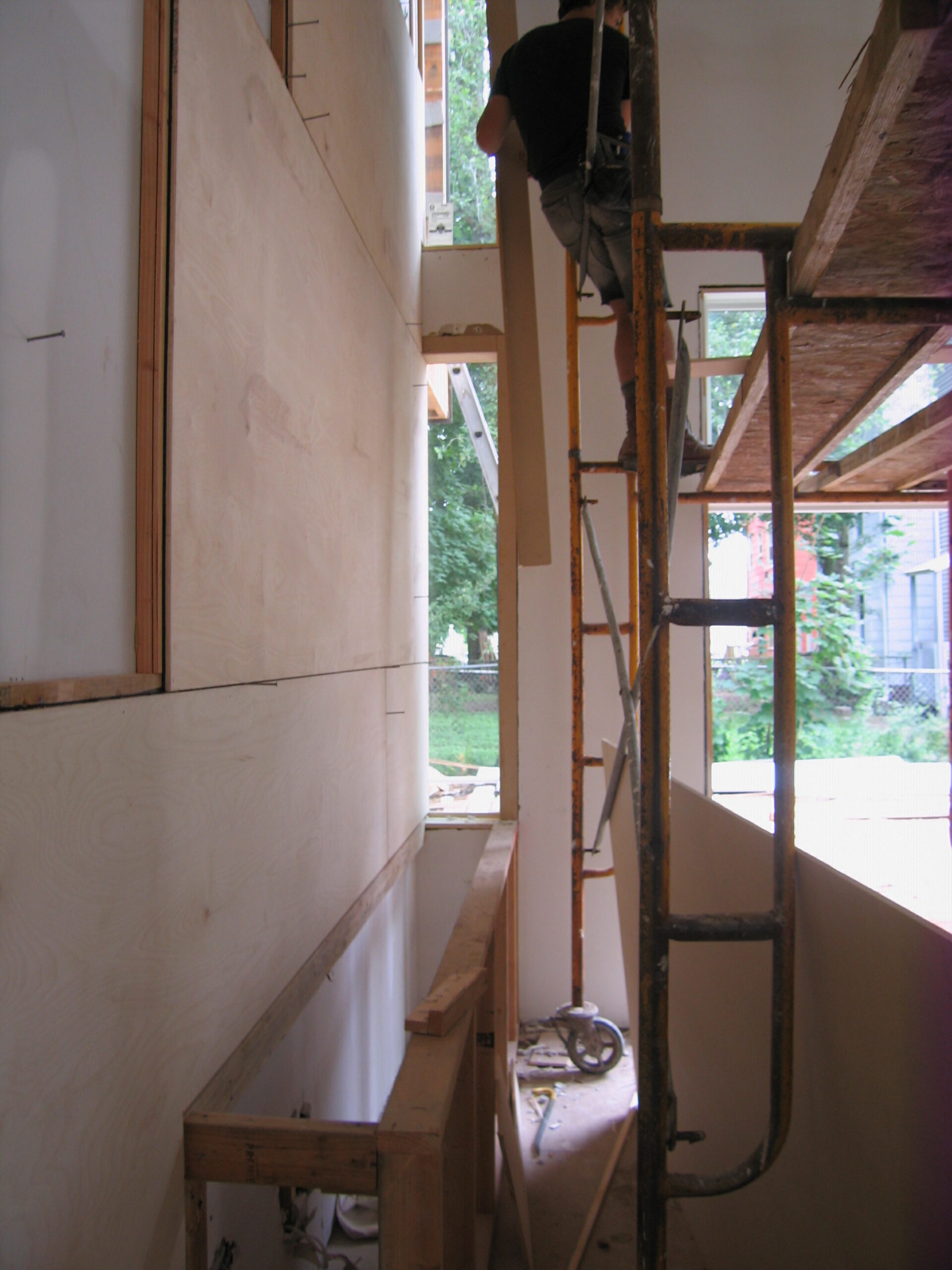 Justin modifies the window detail at the plywood wall.

Also this week, those of us who had been entrenched in siding finally went inside. One of the new jobs at hand was flooring: hard, caramel-colored bamboo flooring. Extremely hard. So hard, in fact, that it rejects many of the staples we fire into it and barely moves when we bang the pieces in with a hammer or mallet, or simply resort to kicking. We started in the upstairs tenant unit. With the cleaning, the laying of the first pieces, and getting the hang of the staple gun, the flooring moved slowly at first. But after a while we got into a rhythm and were able to sink into the flow of a refreshingly straightforward task, free of long debates over design decisions. There were no intricate details, nor did we have to hand-cut each and every piece; the wood arrived conveniently pre-sliced into four different sized pieces. Completely enveloped in our own symphony of noise–between the stapling of the paper, the banging of the boards, the firing of the staple gun, and the hissing of the compressor–we were flying. And the people working below us could hear it. We conquered the entire tenant unit in three days; it was satisfying to watch the progress unfold. Whether they were ready for us or not, we moved downstairs and joined the buzz of activity in the owner unit.

It has certainly been a careful dance around each other, banging, drawing, and measuring in the tight hallways. The chop saw almost made it into the bathroom at one point. But a second staple gun has arrived. This means we can have two flooring teams going at once. Talk about a blitz. 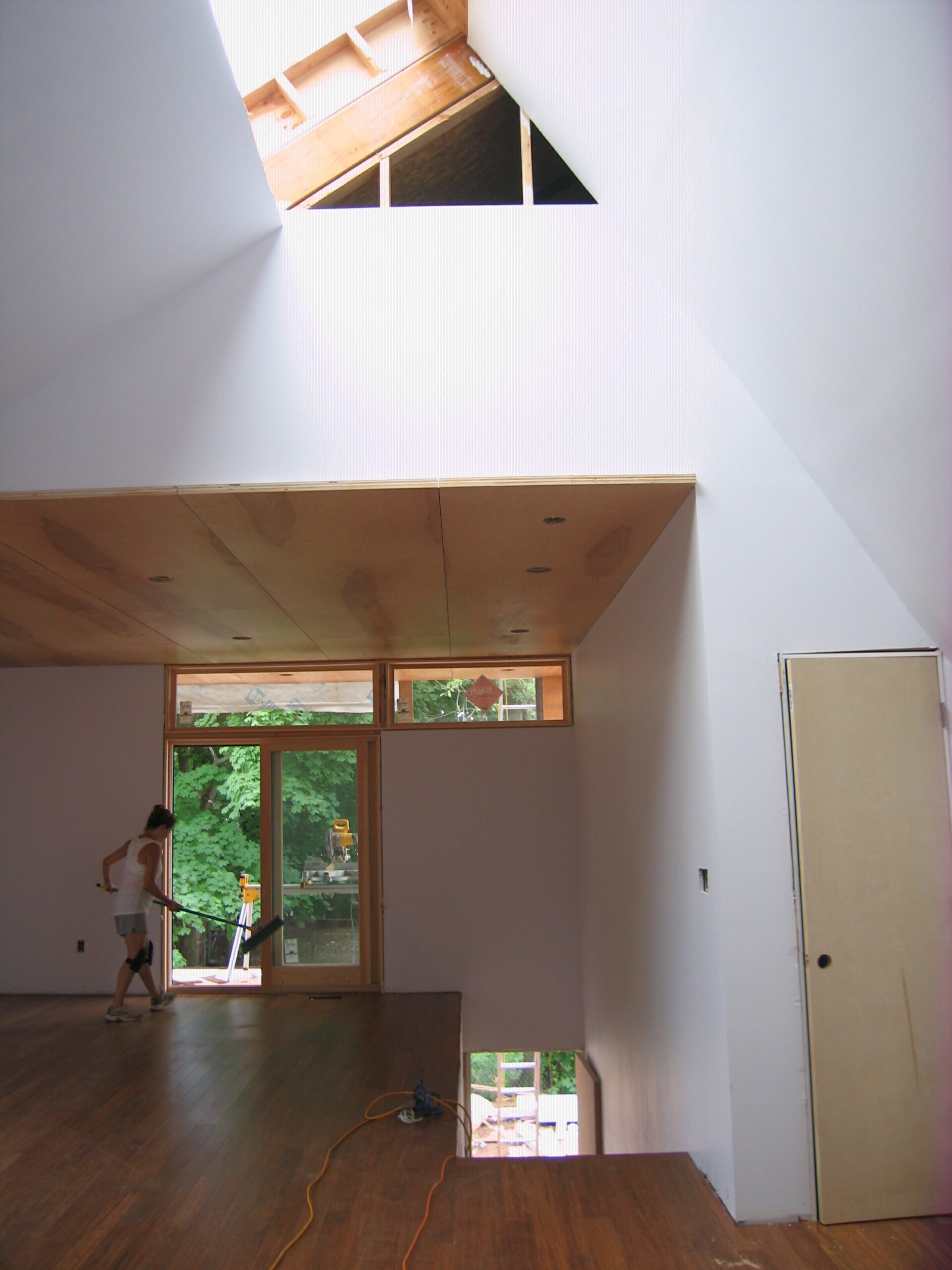 Lindsay polishes off the freshly completed bamboo floor in the tenant living room. 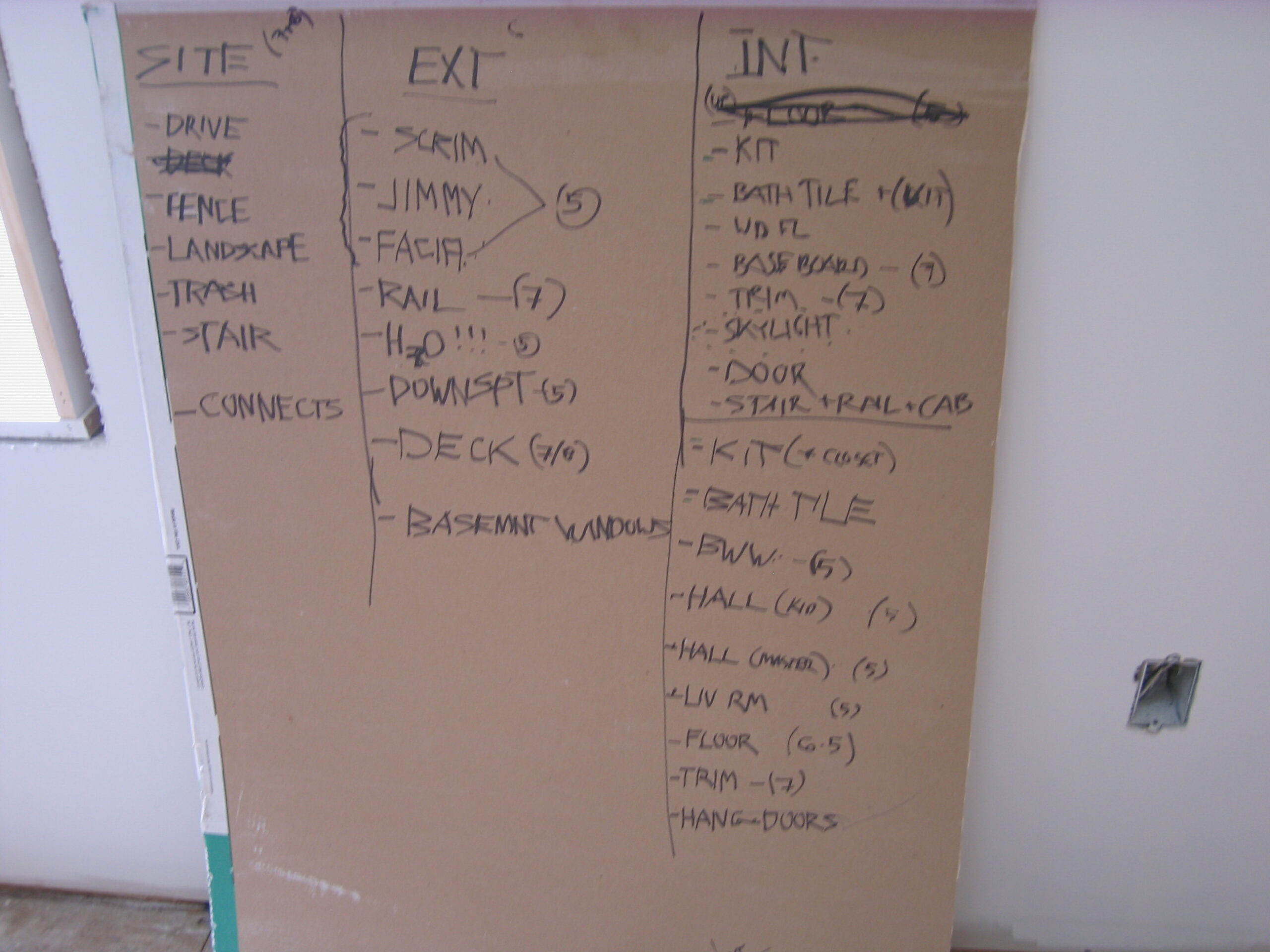 The List–with the tenant floor crossed off

A couple of the specialty teams remain outside. One is taking on the fascia boards and the other is tackling the screens on the front and back of the house. The design of the wood screens started out as a discussion between a couple of students with differing views on what the detail should be. This was not a time for returning to the sub-basement to draw, it was time to take advantage of the physical house. Once the initial mock-up was in place, out came the architect’s hat and the contractor’s hat. We found ourselves wavering between aesthetics and constructability. With the entire building project running on a tight schedule, time became a huge consideration in the design of the detail. Ultimately we agreed on a simplified but still architecturally satisfying solution. The screen decision thus proved to be a successful exercise in compromise. 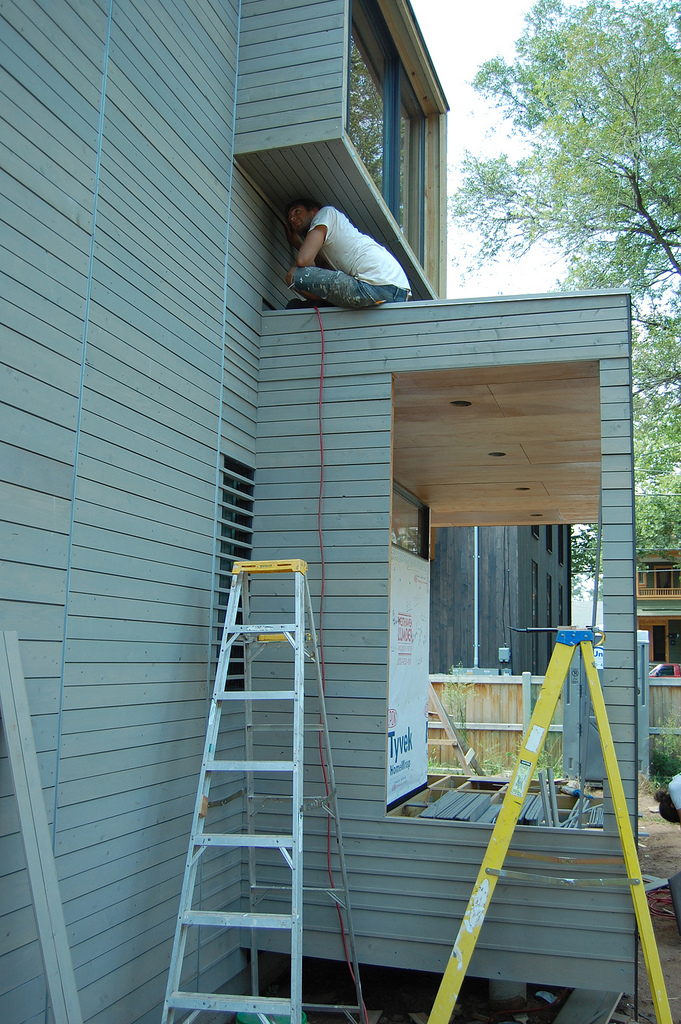 The screen detail begins to emerge, with Kipp inspecting the “snout.” 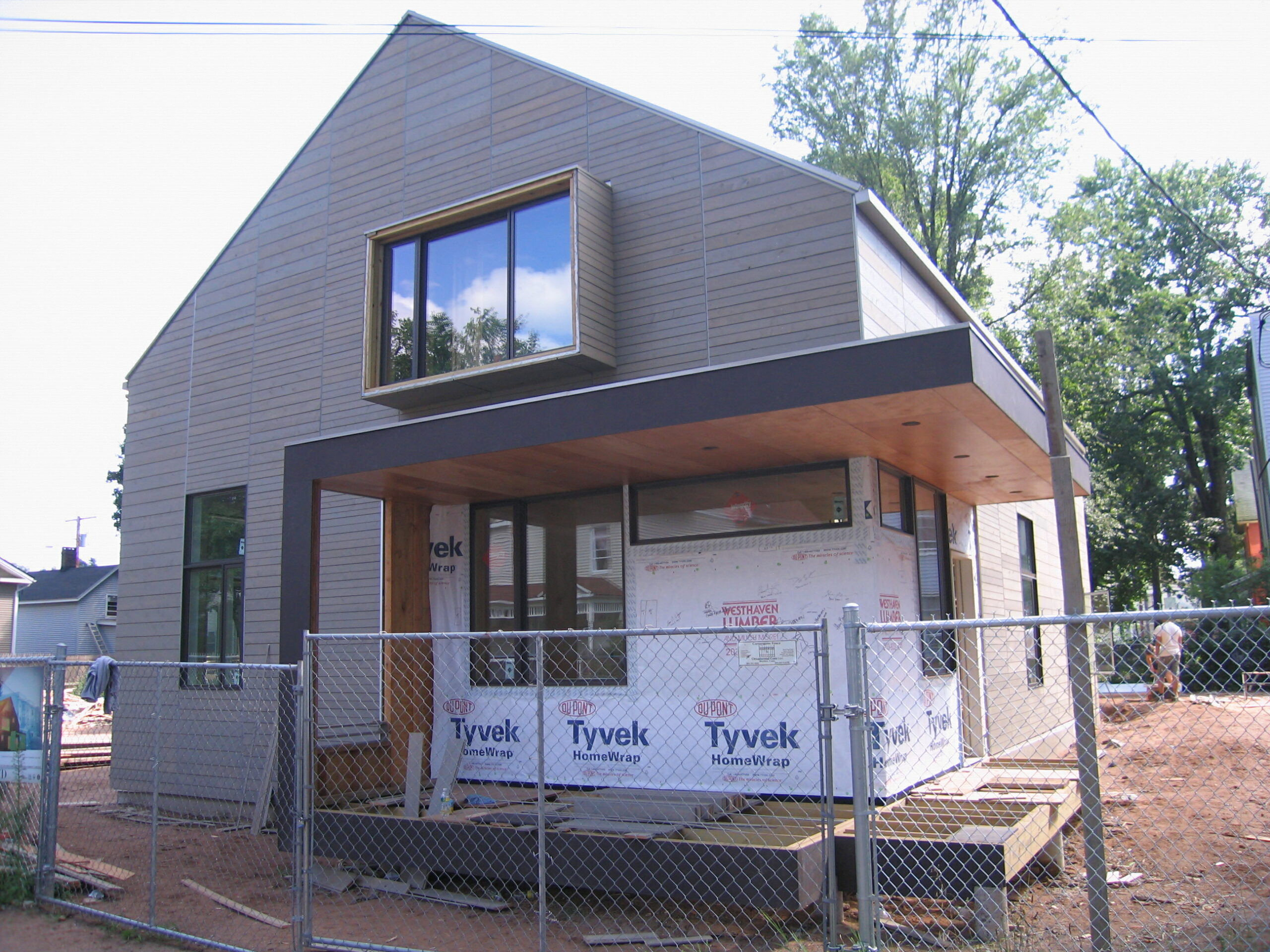 The front of the house with its new look: fascia and no scaffolding

With all of these various tasks going on daily in the house, we’ve been finding the need to constantly walk around to see the progress everyone is making. One day you’re working upstairs on flooring and the next day you come downstairs and all the doors have been hung. Finally, it feels like things are taking off: the inside is really starting to take shape and “Jimmy” is slowly starting to emerge. Each team can proceed on its own, and we all appreciate this newfound independence and ownership that comes with each task. As this week draws to a close, we can come away with a new appreciation of the construction process and what it means to compromise both amongst each other and in terms of reconciling drawings with the construction on site. We’ve found that there are times to discuss and times to just build.

The Vlock First Year Building Project is partnering with Common Ground, a national supportive-housing developer, and the Connecticut Veterans Administration to build affordable, fully-accessible housing for female veterans. Check back next Monday for another installment of the students’ weekly blog for Metropolis.