The students lead a community ground-breaking ceremony and visit a local elementary school.

Every Monday until August, first-year graduate students at the Yale School of Architecture will be blogging about their progress building an affordable, accessible owner-renter residence in New Haven. (Click here to read the first installment.) This week: the ground-breaking ceremony.

The forecast last Saturday called for rain, but when I arrived at the site there was not a cloud to be seen. This was a lucky break for me, as I had spent the last two months coordinating and planning Yale’s first Vlock Building Project Ceremonial Ground-breaking. I saw the ground-breaking as our class’s opportunity to introduce itself to the neighbors. After all, we would be sharing very close quarters all summer. In the end, the event served a much deeper purpose—to foster mutual understanding and respect between two communities who live in the same town but rarely seize the opportunity to interact.

We were received graciously by the nearly 75 people who showed up to see the design, meet the student architects, and enjoy some locally-catered food. There’s a great deal of affection toward last year’s house and, thanks to our publicity efforts for the ground-breaking ceremony, a high level of anticipation for this year’s construction. Actually, I was a bit surprised to find such unanimous approval of our school’s contemporary designs. Many community members told me that the houses uplift the neighborhood. A local roofer remarked on the quality of last year’s standing-seam roof. By the end of the day, three different people asked me for the contact information of the group responsible for selling the house! 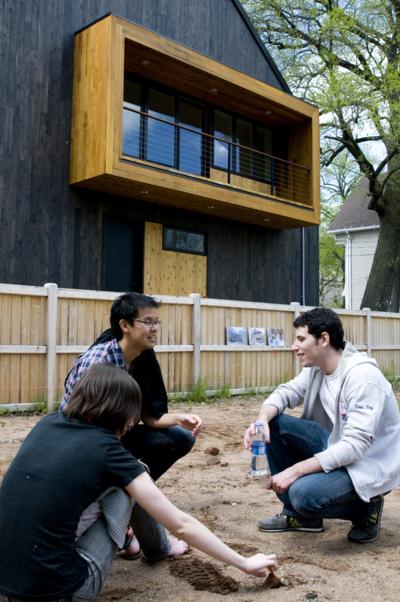 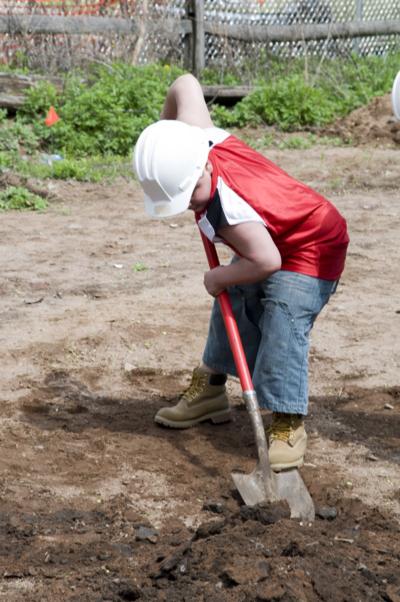 I enlisted the help of three elementary-school students to break ground. They enjoyed playing in the dirt so much, it was hard to get them to stop digging! The idea to ask these children for assistance in the ceremony came from our recent experience at the public school closest to our site. The Wednesday before the ground-breaking, I led a group of my classmates to an eighth-grade classroom, where we attempted our own architecture lesson. It began with the distribution of laser-cut scale figures and a random assortment of model-making supplies. We then asked the students to construct a “space” in which their figures could perform two disparate activities. The results were beautiful and compelling. In just thirty minutes, the students had generated concert arenas with jogging tracks, fashion catwalks adjacent to playing fields, and ballet studios with built-in libraries. 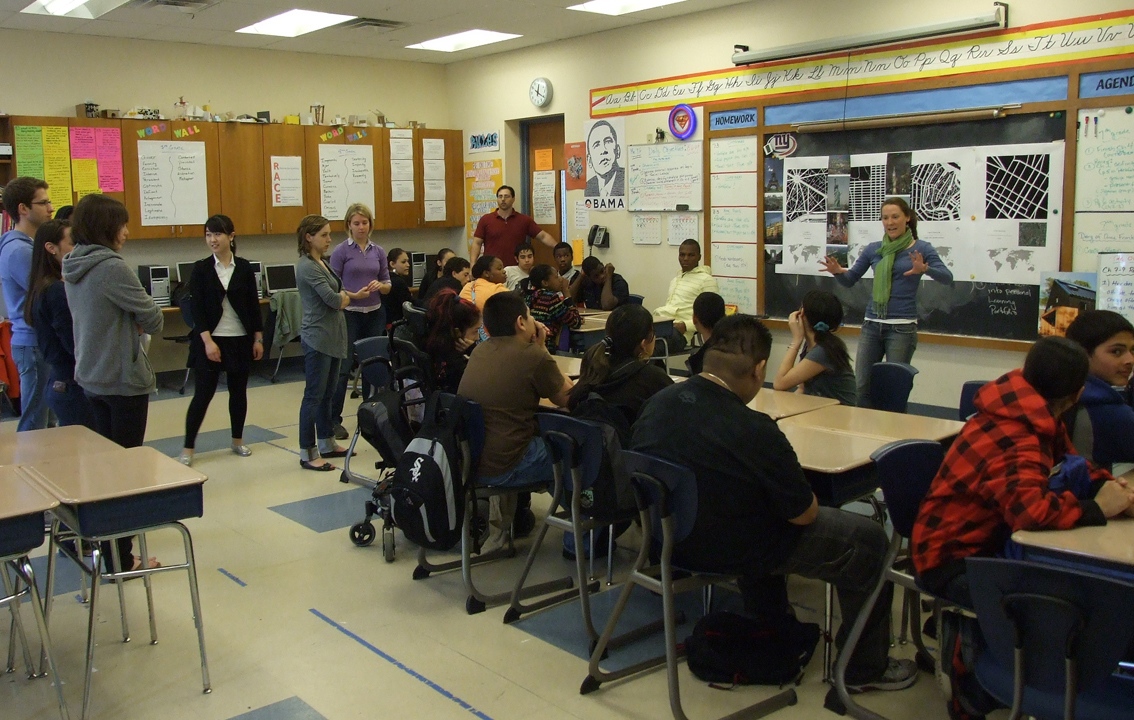 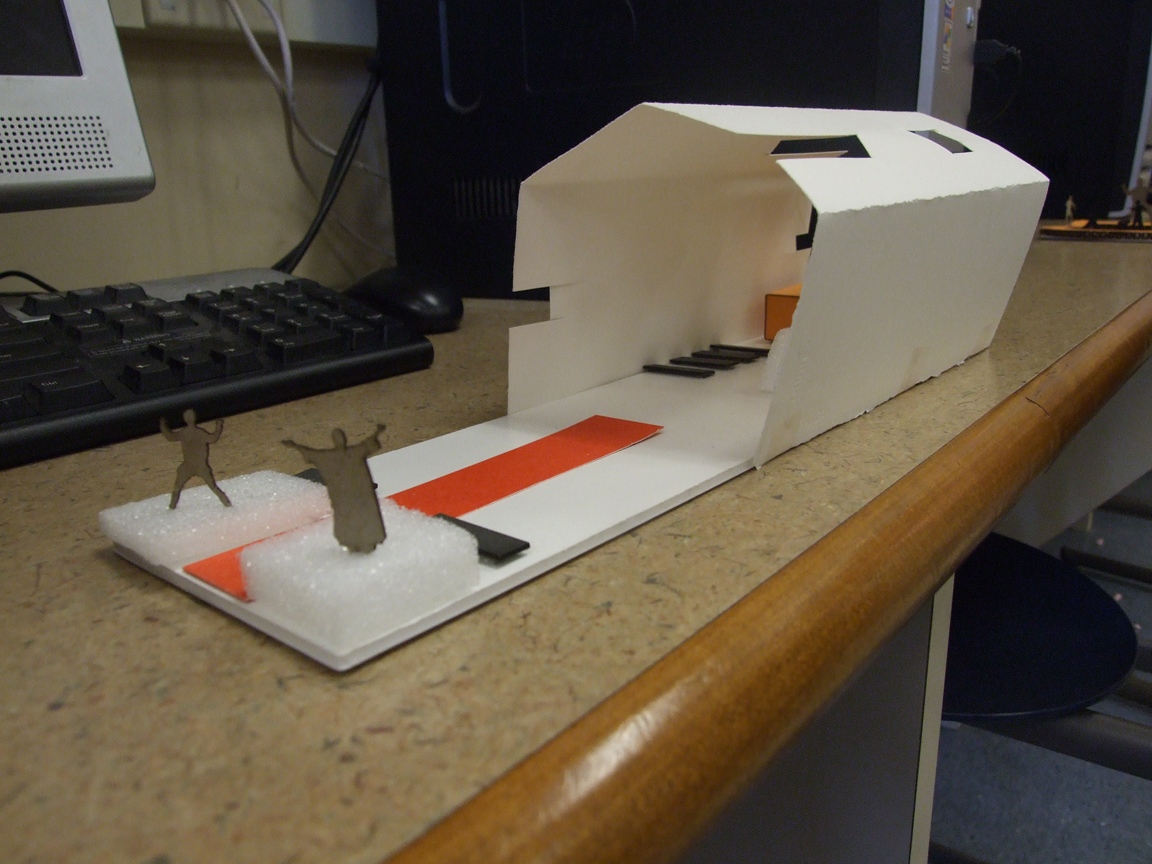 One of the student models

A follow-up visit to the school after the ground-breaking gave us a chance to expand the lesson to an urban scale. In teams, the students explored three typical street patterns found in cities—gridded, radial, and convergent. Working in plan, the teams were asked to assemble parks, commercial space, institutions, and residences using the constraints of the street system. One group organized residences around a central park, while another group chose to divide the parks amongst eight different neighborhoods. The third group went as far as to establish a dense city-center with housing at the periphery. 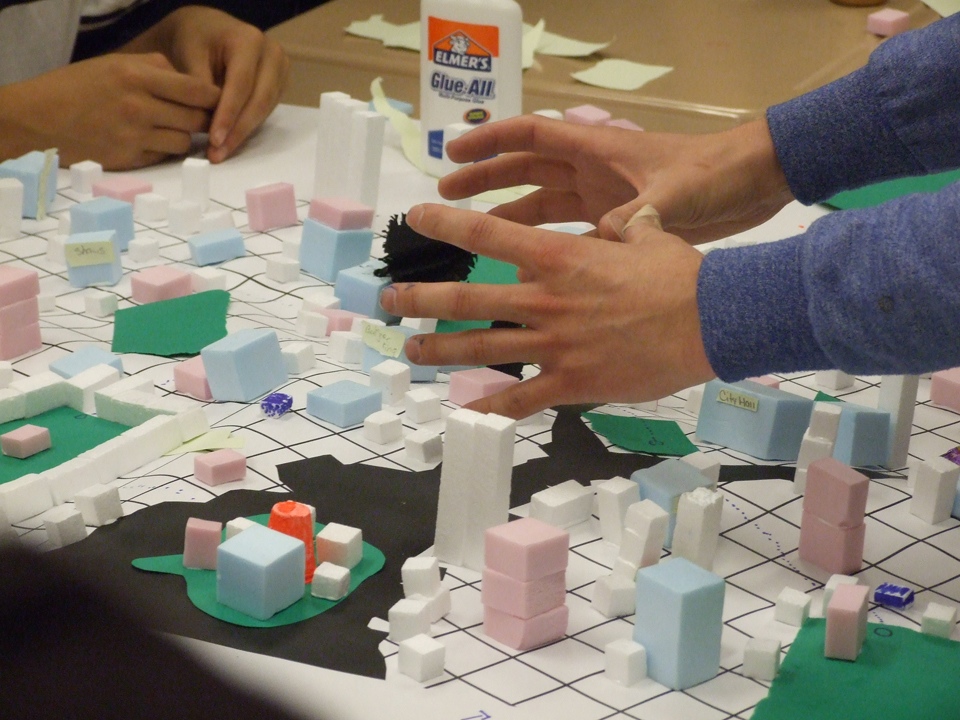 A Yale student describes how his team of eighth graders divided the housing blocks into neighborhoods.

Between the ground-breaking ceremony and our foray into architecture education, the last ten days have reminded me how important it is to involve the community in a project like this. We’re working in a neighborhood, after all, and the local residents deserve to know who is constructing what and when. And while we (in our architecture-school bubble) assume that knowledge of the Yale Building Project is ubiquitous in New Haven, I found that many  people were unclear about the motives of our project, its history, and its potential to impact the entire community. My hope is that by increasing our communication with local residents and educating neighborhood children about the building arts, the Building Project can foster a positive relationship between Yale and the surrounding community and inspire a new generation of architecture enthusiasts.
The Vlock First Year Building Project is partnering with Common Ground, a national supportive-housing developer, and the Connecticut Veterans Administration to build affordable, fully-accessible housing for female veterans. Check back next Monday for the third installment of the students’ weekly blog for Metropolis.