The Yale Building Project, Week 6:
The Ghost Next Door

Working in the shadow of the 2008 Building Project house ignites controversy among this year’s student-builders.

The front view of the house as of last Friday, with last year’s house looking on. Photos: courtesy the Vlock First Year Building Project

“Could we PLEASE forget about last year’s house?” The question, hopelessly optimistic, comes from our program director, Adam, during a recent class meeting to decide on finish materials for the house. A student had defended his opinion on our roof color based on its relationship to last year’s house, and Adam wasn’t buying it. Some in the class nod in agreement. Others roll their eyes. Yet Adam’s resolve to make construction decisions independent of influence from the 2008 project is not nearly as simple as it might seem—in fact, the relationship of the two houses has spawned a continuous stream of debate since the design selection in early May.

This year’s house choice was particularly controversial among the students. At first glance, the design bears significant formal similarities to the project erected next door by last year’s class. But the admiration—or even admission—of this analogy is far from universal: while certain critics praised the correspondence, some rebuked it, and still others denied any resemblance at all. I’ve decided that it’s open season on this last group, and I want to bring to light some of the discussions that have come out of the comparison, and how it’s impacting our work this summer. 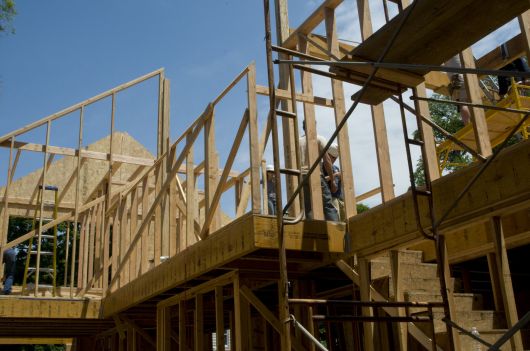 The interior framing just before the roof ridge beam was installed

Given the intensity of the Building Project’s group design phase, the moment when the clients select a proposal for execution always breeds a bittersweet medley of emotions. Back in May, when our studio coordinator emerged from the jury deliberations to announce the winning scheme, the reactions among the students was incredibly varied—and, in some cases, hostile (I’ll spare you the details of the bar fight between two classmates that erupted following the announcement, only to say that, contrary to popular expectations, I was not involved). Reports soon trickled in of angry second-year students who were upset that our class dare try to ‘improve’ their design. Although the fervor has seemingly tapered since the design selection, I would argue that it continues to influence our project today, even if only subconsciously. 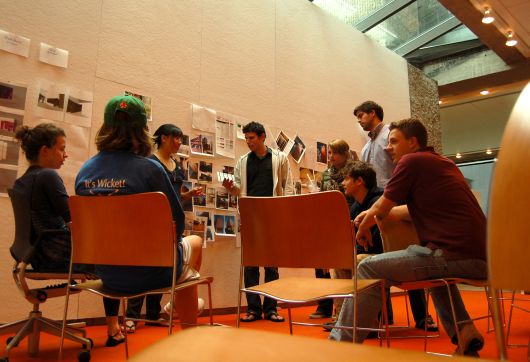 As previously mentioned, our construction site sits next door to the 2008 Building Project site, meaning that we confront the very real presence of our program’s legacy on a daily basis. This week, for example, we’ve made a number of finishing choices, including cladding and roofing. It seems inevitable to use last year’s house at a precedent; if there is a full-scale ‘model’ of different material, lighting, and fenestration options a stone-throw’s away from your site, you use it. But this is also where debate continues to rage. Some people look next door to justify various aesthetic decisions. Others advocate doing everything we can to differentiate our work from last year’s. My suggestion to construct a temporary 30-foot privacy fence between the two houses until construction ends, prompting us to focus on the spatial, programmatic, and experiential possibilities of the house without consulting last year’s version for approval or contrast, was denied. (How is there not money in the budget for that?) And in the end I am but one voice among 48 equally opinionated students. 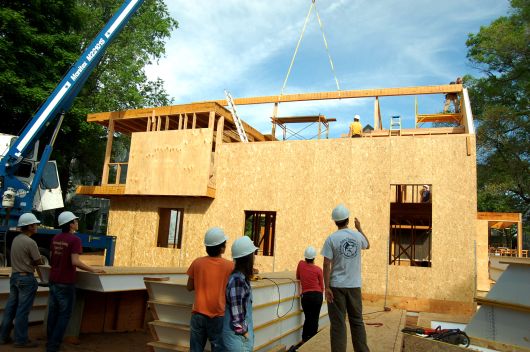 The crane and our program director, Adam, load the ridge beam into place.

Like I said, much is unintentional: I don’t think students are deliberately comparing notes to the building next door in a one-to-one translation. It’s more the fact that most of the class has never worked on a project like this, so as we grope about in the dark, it’s unavoidable that we look at earlier examples. Surely this practice is an annual tradition for the student-architects, but this year it touches on particularly uneasy emotions. The initial wide range of opinions on the winning design are now coming to the fore as we confront numerous discussions for how to finish—and thus, distinguish—our house. This is also one of the very few times in the program’s 40-plus-year history that we’re dealing with the challenge of working right next door to another year’s house, and I wish the very best to next year’s class, which will complete the third lot in our block. (They will have the pleasure of working in the shadow of both the 2008 and 2009 projects, and I look forward to watching that fiasco from a safe distance). 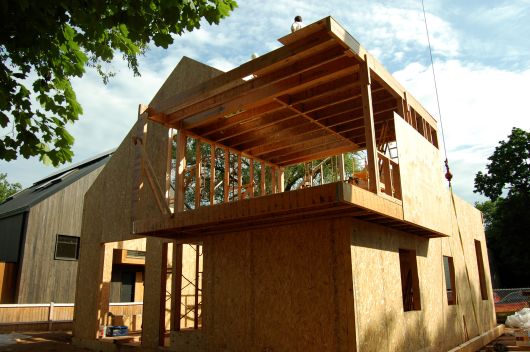 The rear of the house, with a view of the tenant unit’s outdoor space that cantilevers off the back

I’m not bringing all this up to pass judgment on our design or methodology of reaching decisions (really, my word limit is way too short for that); rather, I am trying to shed some light on the daily deliberations that characterize so much of our experience here. If our past blog entries have suggested a merry band of optimists skipping together to the site every day in total accord, I am trying to call to attention a wider spectrum of philosophies. Granted, contention and disagreement is hardly a new phenomenon for Yale architecture students. Dean Stern has set up our school like a playing field refereed by a radically diverse cast of characters; anytime you have Eisenman, Gehry, and Krier simultaneously teaching studios in the same building, you’re likely to hear varying opinions on the way things ought to be done. This plurality of ideas is so central to the ideology of our school that it can’t help but infiltrate the Building Project. And, ultimately, it is this acceptance of debate, even intense argument, that makes the experience more meaningful.

The Vlock First Year Building Project is partnering with Common Ground, a national supportive-housing developer, and the Connecticut Veterans Administration to build affordable, fully-accessible housing for female veterans. Check back next Monday for the seventh installment of the students’ weekly blog for Metropolis.