What’s to be done with all those empty lots during an economic downturn?

An aerial view of a row house block in Baltimore plagued by the “broken tooth syndrome:” Lots of vacant land where housing once stood.

In last week’s New Yorker, writer Nick Paumgarten pointed out the damaging effects of the economic downturn on the urban landscape. “Putting aside the long-discussed public projects that are endangered or doomed… dozens of private undertakings have stalled or died. The calls go out to the architects: pencils down.”

This, in turn, creates a glut of vacant and underutilized land. In Baltimore, where I live, that economic downturn has been happening slowly over the last 50 years. The city has lost 400,000 residents since its population peak in the ’50s. According to current city records, there are 16,496 vacant buildings and 17,617 vacant or underutilized lots.

“Vacant space tends to remain vacant, in anticipation of an upswing,” Paumgarten writes. “Tax policy, inertia, and the eternal belief that things will get better (profitable) again usually trump civic dreams of pocket parks or stickball fields. Whoever ends up owning it all, after the foreclosures and the workouts are done, holds out for the big payday.”

I’ve been curious to know how people are working with these vacant lots in the meantime. Is there a way to activate land when development dollars are not available?

Cleveland has an interesting answer in its group Pop Up City. They hold temporary events on vacant sites around town, things like movie nights, neighborhood dog parks, and flea markets with stalls for local crafters.

The TKF Foundation, based in Annapolis, Maryland, funds projects in the Mid-Atlantic that transform underutilized spots into parks and gardens for public use. They funded a project in East Baltimore to help a pastor turn a drug corner into a park; they supported a community member who planted thousands of indigenous species on a vacant lot, turning it into a full-blown arboreteum. (You can read about the projects in a new book titled Open Spaces Sacred Places.)

Earlier this month I took part in a design conversation around the topic of vacant land and housing. Over 100 people showed up with design schematics, slideshows, maps, photos, and ideas. It’s incredible to see the kinds of grassroots efforts that are happening outside the official planning process: there are farms, community gardens, and designs for collectives of engaged individuals to band together and revitalize blocks of vacant houses together. A sculptor named Sarah Doherty has endeavored to take back the alley behind her house using art. She has affixed pages of poetry to the chainlink fence and placed sculpture on vacant lots. Neighborhood kids, some of them members of a local gang, approached her to see if they could post their own poetry or help with the art installations. Sarah has found that the simplest acts can generate compelling results. After cleaning up the trash and condom wrappers from one particularly dirty spot, she filled in all of the cracks in the asphalt and concrete with blue chalk. “The trash has not come back,” she says. 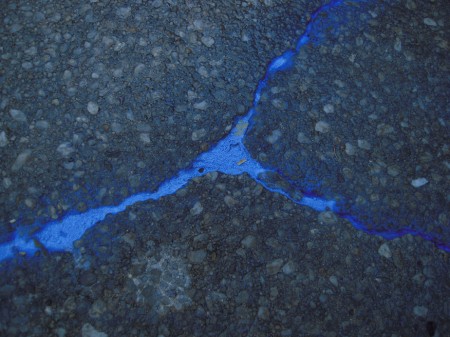 Close-up on the blue chalk in the cracked asphalt. (Reminds me a bit of artist Andy Goldsworthy and the work documented in the film Rivers and Tides.) Photo courtesy of Sarah Doherty.