What can a toy do for architecture?

“Horrified” is how Ila Berman described her reaction to seeing her name next the plastic doll’s for a recent event on women in architecture, produced by the communications committee of the American Institute of Architects San Francisco chapter. Berman is director of architecture at the California College of Arts, and principal of Studio Matrixx. The […]

“Horrified” is how Ila Berman described her reaction to seeing her name next the plastic doll’s for a recent event on women in architecture, produced by the communications committee of the American Institute of Architects San Francisco chapter. Berman is director of architecture at the California College of Arts, and principal of Studio Matrixx. The event was titled, “Ladies and [Gents] Who Lunch with Architect Barbie”.

Architecture is Barbie’s profession for the year 2011, a result of a partnership between the American Institute of Architects (AIA) and Mattel.  Berman, an architect and architectural theorist, joined her fellow practitioners Cathy Simon, Anne M. Torney, and EB Min for a panel discussion on the state of women’s participation in the profession, including the impact of “Architect Barbie”.

Opinion seemed to be divided along generational lines. Simon, FAIA, shared Berman’s sentiment.  Simon founded San Francisco-based SMWM, once the region’s most successful woman-owned firm.  (SMWM has since joined Perkins + Will where the formidable Simon is now a design principal.)  She thinks “Architect Barbie” trivializes the profession and objectifies its female practitioners.

Taking the other side of the argument, EB Min, the San Francisco-based co-founder and principal of an award-winning small firm, was sanguine. Min, an AIA SF board member, is the mother of a three-year old daughter who plays with Barbie.  And apprentice architect, Jessica Lane, who moderated the discussion, believes that architect Barbie will help make the profession–still a male-dominated field and often depicted as such in popular culture–an appealing career option for girls.

Simon is a Baby Boomer. Min and Lane are Gen X, as am I.  Still, I was initially skeptical of the AIA-Mattel partnership.  How could a 154-year old professional membership organization – created in part to “elevate the standing of the profession” – engage in something so commercial with the world’s largest toy company driven by revenue?  I wondered. How could such an esteemed profession – with which I had fallen in love as you young girl after meeting my first architect, my mother’s uncle – be subjected to such an indignity?  Are pioneers like Marion Mahony Griffin, Julia Morgan, and Anna Keichline spinning in their graves?  What to make of the equally remarkable achievements of Norma Merrick Sklarek, Denise Scott Brown, Kazuyo Sejima, and other women?  How does this contextualize the accomplishments of Zaha Hadid, the first woman to win the Pritzker?

But in conceptualizing the AIA SF panel discussion and in the course of doing research for it, I became less conflicted about architect Barbie.  In fact, I grew sympathetic to her plight. After all, earlier in this century “architecture” had previously won Mattel’s competition for Barbie’s next career. But at that time, Mattel concluded, that girls would not understand what architects do, and so much like many real competition entries,  the winning career was shelved.  That is until 2010 when “architecture” lost (another) Mattel competition to “Computer Engineer Barbie”. This time architecture professor and historian Despina Stratigakos, hoping to impact “the politics of the sandbox” and fellow architect Kelly M. Hayes McAlonie successfully petitioned Mattel to instead declare “architecture” Barbie’s profession.  (In 2007 during a fellowship at University of Michigan, Stratigakos led an effort to develop “Architect Barbie” prototypes, as a way to explore diversity in the aftermath of Proposal 2 which ended affirmative action in Michigan.) 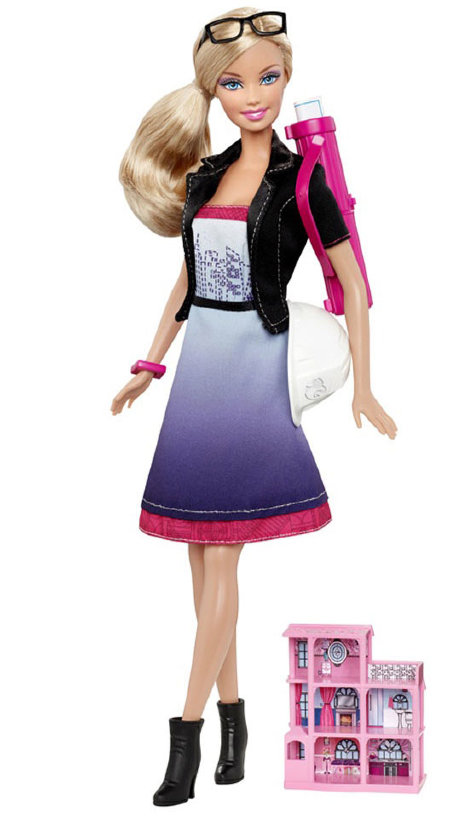 So who am I to deny “Architect Barbie” her victory?  Who am I to say that marketing architecture through a best-selling international icon was not an inspired decision on the part of AIA?  Besides, the 52-year old never-married, never-been-pregnant Barbie Doll has had more than 125 careers and represented 50 different nationalities in her lifetime.  Talk about girl power.

Ruth Handler, Barbie’s creator and former Mattel, Inc .CEO, would have been 95 this November.  The world would be Barbie-free had she listened to her husband and his business partner (the Mattel founders).  Both were unconvinced about her idea.  Many years later unable to find suitable prosthesis following her mastectomy, Handler developed “Nearly Me,” a line of post-mastectomy products.

Reflecting on her success at SMWM, Cathy Simon remarked, “We imagined it that way.”  Noting that women comprise half the world’s population, Anne M. Torney, a principal at Daniel Solomon Design Partners, encouraged the attendees to stay the course, “There is a market for how we think.”

I bet Ruth Handler would agree.