What’s Good for Manhattan Must Be Good for Queens

The Jacob K. Javits Convention Center, which might be razed and replaced by a new development in Queens. For almost two decades, The Municipal Art Society of New York (MAS) has advocated for the transformation of the Farley Post Office into a new Penn Station to be called Moynihan Station. Governor Cuomo’s recent State of […]

The Jacob K. Javits Convention Center, which might be razed and replaced by a new development in Queens.

For almost two decades, The Municipal Art Society of New York (MAS) has advocated for the transformation of the Farley Post Office into a new Penn Station to be called Moynihan Station. Governor Cuomo’s recent State of the State address suggests that 2012 could be the station’s moment.

The immediate story is, of course, the possible razing of the Jacob K. Javits Convention Center and its replacement, at the site of the Aqueduct Racetrack in Queens, by what the Governor describes as the nation’s largest convention center. Before moving ahead, however, we must make sure that what’s good for Manhattan is equally beneficial for Queens.

Getting rid of Javits is a great idea – but not in isolation. The key issue is what will replace it. If a reimagined Far West Side is to succeed, we need to develop nuanced and comprehensive strategies for urban design, transportation and how to engage the public in the planning process.

We also need to make sure that the new convention center doesn’t become another Javits or, worse yet, another Coliseum. New York City’s history of failed convention centers (the Coliseum stood for 44 years; Javits opened 26 years ago) proves that we need a convention facility with the spatial flexibility and community buy-in to thrive well into the 21st century.

Let’s start with transportation. With both a new convention center and a redeveloped Javits site on the horizon, New York urgently needs a transportation infrastructure that can support these mega-projects.

The gargantuan size of a modern convention center like the one proposed by the Governor dictates a comprehensive transportation upgrade. The 18-acre Javits site is larger than 13.5 football fields and gets more than three million visitors a year. The proposed Queens site would handle at least that number of people, if not considerably more. Numbers this large demand an expanded Kennedy Airport and extensions of the subway and bus lines serving Ozone Park.

While, on Manhattan’s Far West Side, some transportation improvements are already in progress, more are needed, with the perennially overcrowded Penn Station topping the list of challenges.  In 1963, 200,000 people passed through its concourses daily; by 2008, usage had more than tripled to 640,000 – more than LaGuardia, Kennedy and Newark Airports combined. A redeveloped Javits site necessitates replacing Penn Station with Moynihan Station, and soon. 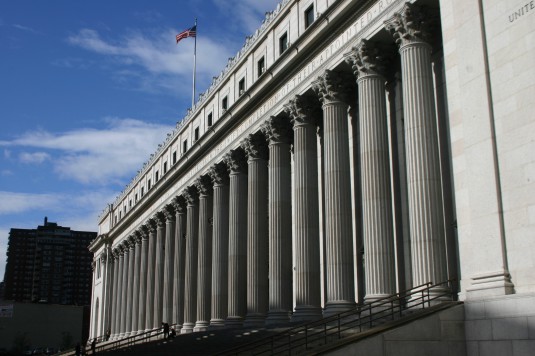 New York’s Farley post office, which could be  Moynihan Station.

Integrating a new convention center and a redeveloped Javits site into their respective neighborhoods is equally important. The best way to ensure these developments’ long-term viability is to , first, insist on a planning process that is fully transparent and public and, second, expose the plans to rigorous review, early and often.  Community engagement is essential. A public planning process like the City’s Uniform Land Use Review Procedure (ULURP) would allow community boards to weigh in alongside policymakers and experts. Public forums to tease out urban design, sustainability, environmental effects and community issues would raise the odds of success even more.

The construction of a new convention center in Queens and the simultaneous redevelopment of the Far West Side could bring millions of new visitors – and millions of tax dollars – to New York City.  Let’s make sure these projects benefit their host neighborhoods as much as they do the city as a whole. Our citizens deserve nothing less.