The Ad Man Whose Visionary Workplace Was 20 Years Too Early

The ad man had some visionary ideas about workplace design – 20 years too early.

Somewhere on the New Jersey Turnpike, I had a ﬂashback. I was on a ﬁeld trip to see a new ofﬁce building for the pharmaceutical company GlaxoSmithKline (GSK). But the design of the building—led by architects at Robert A.M. Stern, engineers at Buro Happold, and interior designers at Francis Cauffman—wasn’t the main attraction. Nor was I lured by a publicist’s email with the subject line, “Tour the workplace of the future.” I was interested in its location, the Philadelphia Navy Yard, which has emerged as a vibrant twenty-first-century variation on the ofﬁce park. As a big fan of the Brooklyn Navy Yard, I felt I owed Philly an equivalent visit.

On the bus ride down, someone passed me a memo outlining how the GSK building had been designed to accommodate and encourage a “new way of working.” No assigned desks. No individual ofﬁces (even for the company president). Instead, the 208,000-square-foot, four-story complex was divided into “neighborhoods,” collaborative work zones where employees could store their possessions in lockers and set their laptops on communal tables, or on any individual work surface they pleased. They could change locations daily, or even hourly, and raise sitting desks to standing height if they felt the need. When employees moved in, they were all given little canvas totes in which to transport their desk-drawer miscellany: Post-its, pens, and bottles of disinfectant (necessary to make germ-conscious pharmaceutical employees feel comfortable sharing).

Suddenly, it was 1994 all over again. The last time I visited “the workplace of the future” it was on the 38th ﬂoor of a glass tower in New York City’s ﬁnancial district. TBWAChiatDay, the pioneering ad agency, had taken up residence in a high-rise built originally for an insurance company, banishing the corporate palette in favor of screaming oranges and reds, courtesy of designer Gaetano Pesce. The agency created a workspace with no assigned desks, lockers for personal possessions, a central computer to route faxes to their proper destination (email hadn’t become commonplace yet), and a cartoony virtual ofﬁce environment called Oxygen, where the company’s far-ﬂung employees could attempt to ﬁnd each other.

“Jay feels ofﬁces and desks are anachronisms from the nineteenth century,” I was told by Steve Alburty, then the director of information services for the agency. “They inspire politics and secrets. There’s a lack of cross-pollination.” In a piece on the future of work for Metropolis, I wrote: “Everywhere, leaning against walls, curled up in red beanbag chairs, walking in aimless circles  . . .  are ChiatDay employees with portable phones pressed against their left ears and palms pressed against their right ears.” At the time, the young workers, deprived of their task chairs, ﬁle cabinets, and knickknacks, reminded me of street people. They appeared unmoored. This was years before the sight of aimless pedestrians glued to their cell phones became routine.

Two decades later,  it’s hard to say why this all looked good to me. “I leave ChiatDay feeling strangely optimistic, as upbeat as I’ve ever been about the electronic future,” I wrote. “In part, I’m pleased because they used electronic tools to rebuild the agency around the needs of the creative workers rather than the conventions established for other sorts of businesses.” My optimism, no surprise, was misplaced. “The virtual ofﬁce designed by Gaetano Pesce, however gorgeous, sent some staff members over the edge,” the New York Times reported four years later, as the company prepared to scurry back to ofﬁces on Madison Avenue. As it turned out, ChiatDay’s employees didn’t like the emphasis on the virtual. They weren’t comfortable drifting from beanbag chair to beanbag chair. “People need a sense of place and belonging,” the company’s chairman, Lee Clow, told the Times.

Standing at the entrance to GSK’s 80-foot-tall sunlit atrium, I wished that Chiat were around to see the triumphant reworking of his vision. (He died in 2002.) It’s no longer some half-baked revolutionary experiment. The ultra-open, non-hierarchical, non-territorial ofﬁce, designed to promote cross-pollination, has been mainstreamed. The ﬂoors aren’t orange and red, but something approximating beige. The lobby is dotted with sleek, candy-colored upholstered chairs in chartreuse, purple, and, yes, orange. And the rear wall of the lobby’s trendy coffee bar is so orange and shiny that it could be read as an homage to Pesce. It reminded me of the lobby in a new German Hilton, where I’d recently stayed. 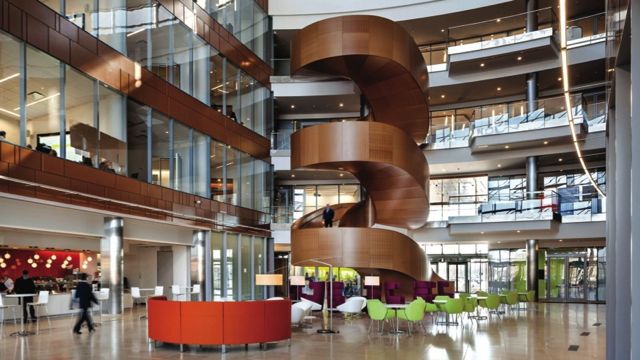 We were given the grand tour by representatives of every design ﬁrm and GSK department that had a hand in the project. Standing just inside the building’s glass front doors, Christian Bigsby, GSK’s senior vice president, worldwide real estate and facilities, explained how the building embodies transparency, respect for people, and integrity. “You’re seeing a values-based building,” he declared. The so-called neighborhoods are behind glass walls so employees can see their colleagues. This isn’t a Panopticon where workers are observed from a central vantage point, but a model more analogous to social media: everyone is watching everyone. They can look across the atrium, or up and down a level or two. I’d seen this mutual surveillance setup before. The 2010 MIT Media Lab building, designed by Fumihiko Maki, has an atrium ringed by glass-walled labs. The goal? To put the research on display.

The focal point of the big GSK atrium is a circular staircase. Clad in dark maple veneer, it draws the eye like a monumental work of sculpture. Elevators are hidden from view, so that employees will use the stairs, get exercise, save energy, and bump into their colleagues. The staircase, as design statement, is very au courant. Perhaps it was the ad agency Weiden Kennedy that hatched the trend. The ﬁrm’s Portland, Oregon headquarters, completed in 2000 and designed by Allied Works, has a central staircase that doubles as bleachers, turning the heart of the building into an open auditorium. A more recent example is 41 Cooper Square, the Cooper Union’s newest building, designed by Morphosis and completed in 2009. The architects referred to the 20-foot-wide stairway that runs through the heart of the building as “a vertical piazza” and claimed that it helps “foster collaboration and cross-disciplinary dialogue.”

Sadly, ChiatDay tried its reinvention of the office way too soon. The technology wasn’t up to speed yet, and neither were the workers. A generation would have to pass before employees could happily manage a work life that plays out across a shifting array of media, in environments real and virtual. The most direct inspiration for GSK’s rethinking of the corporate workspace might be just on other side of the Navy Yard. There’s a complex of gargantuan sheds, where battleships were once built, that was transformed in 2006 into the headquarters of Urban Outﬁtters. Designed by Meyer, Scherer, and Rockcastle, a Minneapolis ﬁrm specializing in adaptive reuse, it looks more like a museum/resort hybrid than a large corporate workplace. My immediate reaction—one that I never had at ChiatDay—was: I want to work here. As we meandered past young fashionistas having impromptu meetings, Peter Dixon, Stern’s director of external communications, told me that Stern had tried to imbue the GSK atrium with some of the Urban Outﬁtters’ atmosphere. They did more than that. The LEED platinum building is a terriﬁc synthesis of pretty much everything that’s happened to workplace design since the failed ChiatDay experiment. It is, as Bigsby says, a values-based building. But the values—transparency, collaboration, ﬂexibility—aren’t particular to the culture of this one corporation. They’re the zeitgeist. This isn’t the workplace of the future. It’s the workplace of the moment.