A vibrant housing development
in Santa Monica offers the good life
at a surprising price. 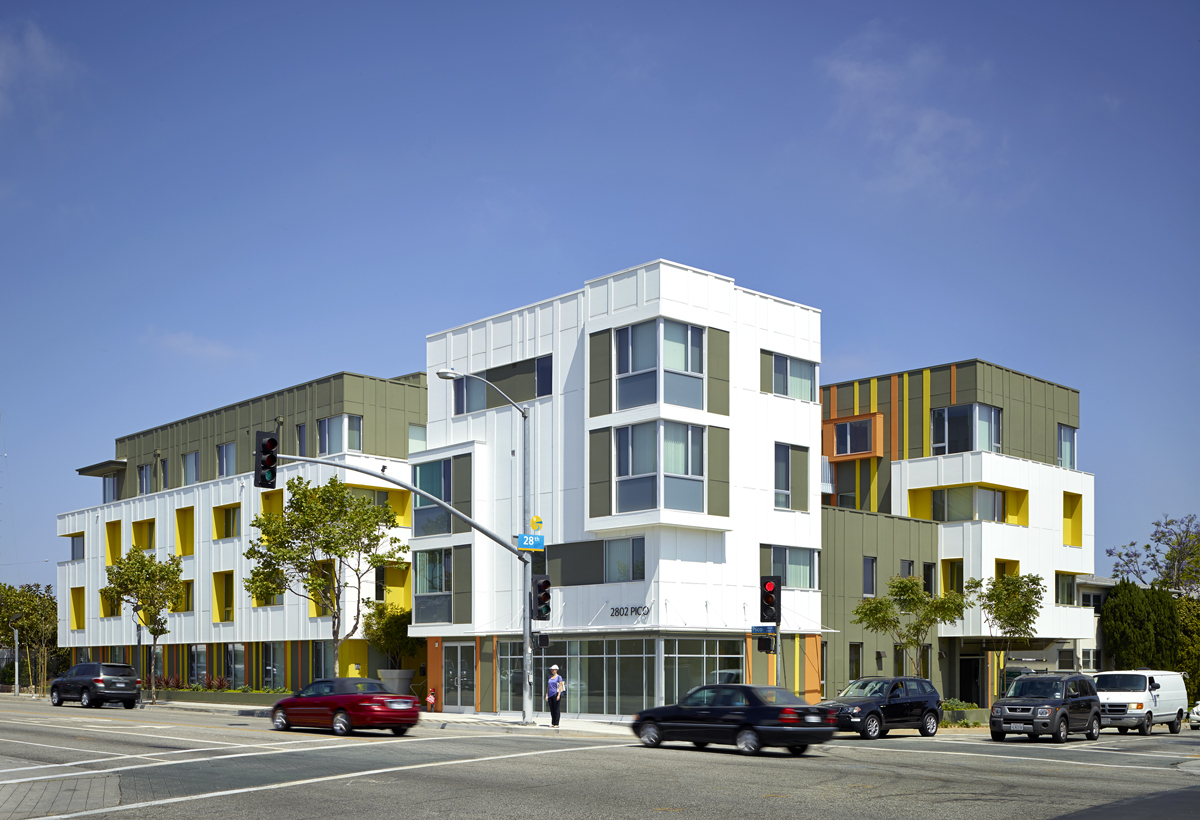 The facade of 2802 Pico Housing is a response to the site, which straddles two zoning districts—resulting in different heights, setbacks, and densities. The recessed windows are a necessary buffer against the noise of traffic on bustling Pico Boulevard.

Letts looks down into the building’s open-air courtyard. Bridges crisscross the space and vertical yellow and orange bands stripe the walls, yet the courtyard is a respite from busy Pico Boulevard despite the riotous circus tent hues. A light ocean breeze blows between the buildings, rustling the trees planted in the comically overscaled pots selected by landscape architect Pamela Burton. At mid-morning, all the resident kids are in school, but they’ve left behind evidence: bikes crowded by the courtyard entrance, drawings hung in the community-room windows, and a children’s play area painted in huge yellow and green polka dots. More ingratiatingly playful than sophisticated, the courtyard is likely a great space for families to hang out.

For more than 25 years, the CCSM has revamped multiunit buildings and commissioned local architects to come up with innovative solutions for affordable housing. In afﬂuent Santa Monica, a progressive city that has seen a boom of high-end housing development—luxury lofts and creative-class condominiums geared to young professionals in the tech and entertainment sectors—CCSM’s efforts try to counter economic inequity. But while the organization receives requests from nearly 3,000 households, it has only 100 to 150 vacancies each year. 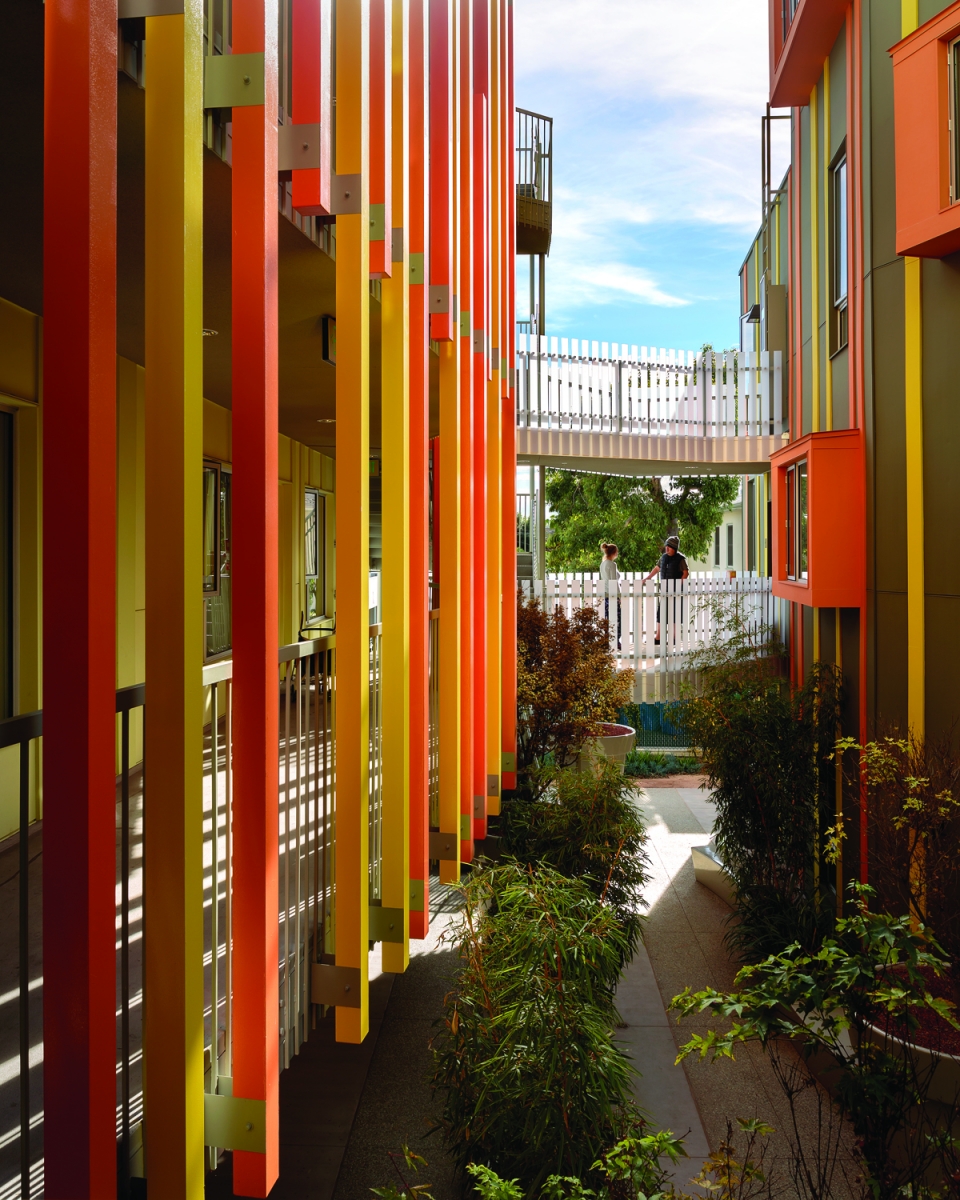 The bridges crisscrossing the open courtyard at 2802 Pico Housing are more than just connectors—they’re gathering spaces and front porches for the affordable apartments.

Located on the corner of Pico Boulevard and 28th Street, the development is close to almost everything that makes for a good neighborhood: a new park under development, Santa Monica Community College, and public transit—buses and, eventually, the Exposition Metro Line. But it came with two big initial challenges. First, old tanks dating back to when the lot was a gas station had to be removed and the site remediated. Second, the site straddles two zoning districts, each of which conforms to different densities, height limits, setbacks, step-backs, and parking requirements, which explains why one L-shaped wing of the plan is four stories high and the other L-shaped wing is only three.

Moore Ruble Yudell’s design for the 42,263-square-foot building does its best to maintain an urban street wall on a commercial strip lined with one- and two-story retail outlets (like the 99¢ Only Store across the street) and stand-alone fast food restaurants (a nearby KFC comes with a side of parking spaces). Boxy geometries break up the building’s massing into color-coded zones: olive green, white, and striped. To buffer the living units against trafﬁc noise, window openings are recessed deep into the cement board facade. There’s even a yet-to-be-leased retail space on the corner. Letts is betting on retail enlivening the corner and providing services to tenants and locals. 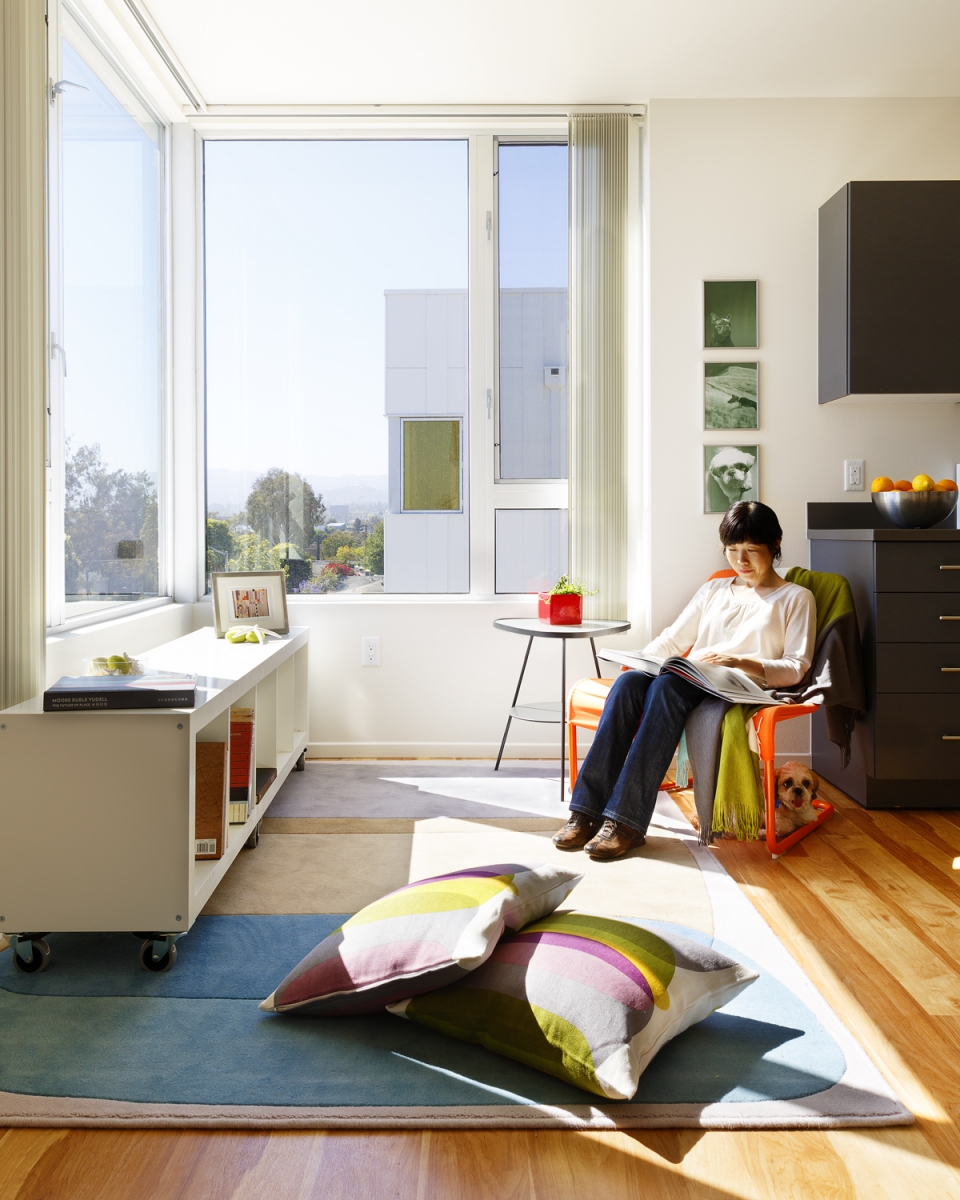 An interior of one of the apartments.

“We try to make architecture that is more humane,” explains architect James Mary O’Connor, of Moore Ruble Yudell. “If it’s not livable, it’s only about image.” Indeed, small decisions account for the project’s success. Efﬁcient apartment units feature good natural light, a minimum of wasted hallway space, and wood ﬂoors for easy maintenance. Stairs and walkways are generously treated as social spaces, not simply as circulation.

“The challenge of vertical density is how to make open space,” says O’Connor. Rather than double-loading the roughly 50-foot-wide courtyard with corridors, the architects created an exterior walkway on the north side with bridges to connect directly to units on the south side. A ﬁgural triangle forms in the middle of the courtyard due to the midair crossing of the bridges and seems to illustrate the latent dynamism of courtyard socializing.

Look closer and you’ll ﬁnd little waist-high gates at the entry to each bridge. These aren’t bridges, really, but porches leading to apartment doors. Brushed acrylic slats form the railings of each bridge/porch. According to O’Connor, the firm chose the material in order allow light to ﬁlter down to the ground ﬂoor. But the slats unwittingly resemble a trope right out of the traditional domestic playbook: a white picket fence. In a project gainfully wrestling with the challenges of affordable housing, there’s an oddly comforting piece of home.