Bats are awesome. How could you not love something that uses echolocation, lives in caves, and is the only truly flying mammal? They also are really important to humanity. Bats fill a unique and important niche in our ecosystem, “one bat eats about 2,000 to 6,000 insects each night” according to BatConservation.org. And Bat Conservation […]

Bats are awesome. How could you not love something that uses echolocation, lives in caves, and is the only truly flying mammal?

They also are really important to humanity. Bats fill a unique and important niche in our ecosystem, “one bat eats about 2,000 to 6,000 insects each night” according to BatConservation.org. And Bat Conservation International says, “A single little brown bat can eat more than 1,000 mosquito-sized insects in just one hour.”

So while they are good at keeping our ankles bite free, they also help our economy. According to The Nature Conservancy, “A recent study estimated the value of bats to Tennessee agriculture at over $313 million annually”, certainly not chump change. Not to mention how mosquitos are carriers of diseases.

And while these little guys are great eaters and pretty cool to watch, they also are under threat. An epidemic called White-nose syndrome, is killing off massive numbers of America’s bats. 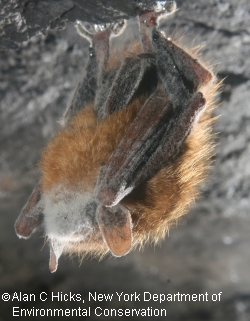 The disease has killed more then 5.7 millions bats since 2006, and is known to cause 100% mortality rates in some colonies.
“Named for a cold-loving white fungus typically found on the faces and wings of infected bats, White-nose Syndrome causes bats to awaken more often during hibernation and use up the stored fat reserves that are needed to get them through the winter. Infected bats often emerge too soon from hibernation and are [can be] seen flying around in midwinter. These bats usually freeze or starve to death.” –Bat Conservation International
This is bad news for farmers and ankles alike, so how do we help them? 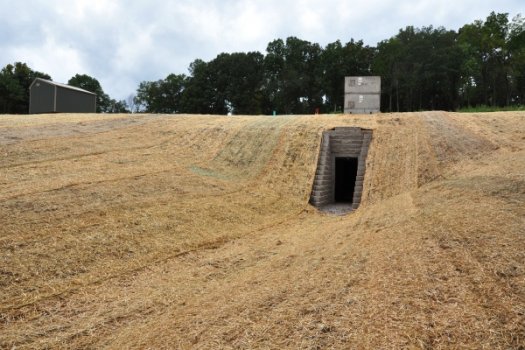 Photo courtesy of PopSci.com, photo by Paul Kingsbury of The Nature Conservancy

While it seems more bunker then bat fungus cure, this man-made bat cave is just the start of the battle against white-nose. The picture above shows the human entrance to the winter hibernation cave, so once the bats leave in the spring, people will clean and disinfect to prevent the spread of white-nose.

The cave is designed for bat hibernation, as the structure creates a cold air trap, a pocket of air with a low level of exchange that protects bats from drastic temperature changes. The concrete surfaces are textured for gripping, and a variety of roosting materials are provided. The gray box you see above the human door is the bat entrance. It’s grated to prevent people from falling in. 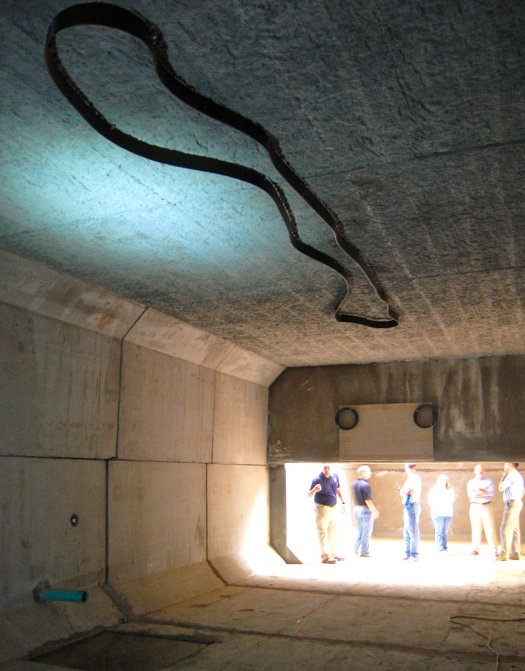 Photo courtesy of PopSci.com, “Inside the Artificial Bat Cave” by Rebecca Boyle

The cave is constructed from “28 pre-cast concrete sections, which fit together using a tongue-and-groove system. They’re modified versions of a standard concrete culvert used under roads and highways. Most of them weigh between 17 and 21 tons apiece” according to Popular Science. There also is a minimum 4 feet of soil covering all cave surfaces, this will help keep the underground temperature more consistent. The Nature Conservancy says the project cost $300,000. But what if the bat’s don’t like it?
“The artificial cave is placed near a natural cave with an established hibernation population of gray bats. The plan is to coax some of them to the new digs by emitting ultra-sonic bat calls on loudspeakers.” –The Washington Post

“Past experience shows that bats are constantly seeking new habitats. They move from cave to cave, tree to tree, always looking for new places that meet their needs for roosting and hibernating… The bats should go in as long as we get the temperature and humidity right. We believe they will. If they don’t go in, then we must have done something wrong, and we would make any adjustments we can…” –Cory Holliday, cave and karst program director for The Nature Conservancy in a Nature.org Q&A. 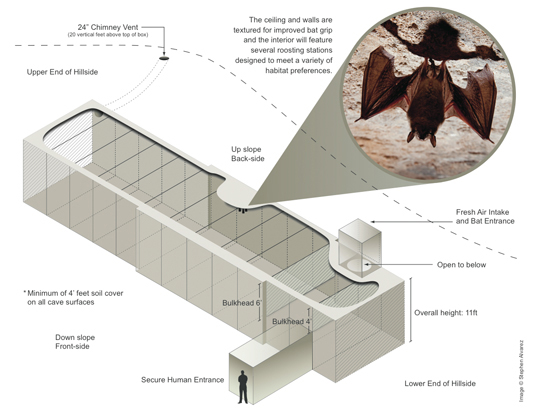 There are lots of examples of bat architecture out there. Here is a link to a successful man-made roosting cave, which has successfully raised thousands of pups. But these examples got me thinking, why else should we build structures for animals? We certainly do so for education and recreational watching, like zoos and bird feeders. But there also is the importance of building awareness around the human nature connection.

AnimalArchitecture.org is an organization that looks at the performance and roles biology can play in design, “illuminating alternative ways of living with nonhuman animals, discussing cross-species collaborations, and defining new frameworks through which to discuss biologic design”. The organization has a yearly competition that looks for ideas that demonstrate new ways for people to live more fully within our natural world.

This years winning entry, BAT CLOUD, by Joyce Hwang, is designed to bring awareness and visibility to the importance of bats in our ecosystem. 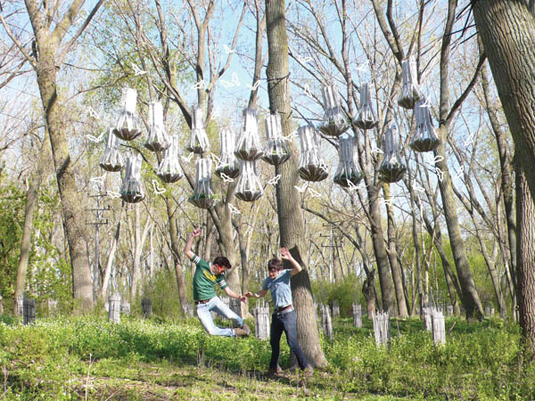 “Installed in Tifft Nature Preserve, a park-like wooded setting developed on a former landfill in the industrial zone of Buffalo New York, BAT CLOUD is a hanging canopy of vessels that is designed and constructed to support bat habitation. From afar, the piece appears like a shimmering cloud, hovering in the trees. Closer up, viewers from below would be able to see plants hanging from each vessel. At dusk, onlookers can catch sight of bats emerging from the habitation vessels.”
Designers, what are some of the ideas you have that could help our flying friends fight off the white-faced menace?