In Atlanta, Transforming a Freeway Into a Cultural Greenway

Midtown section of the plan with building labelsFreeways have sliced through the hearts of many communities, creating derelict wastelands that destroy neighborhoods and sever connections. Our cities have buried, covered, or dismantled the massive structures required for high-speed automobile infrastructure. With our virtual vacuum of public finance for such projects going forward, we need to […]

By: Kinder Baumgartner and Elizabeth Shreeve

Midtown section of the plan with building labels

Freeways have sliced through the hearts of many communities, creating derelict wastelands that destroy neighborhoods and sever connections. Our cities have buried, covered, or dismantled the massive structures required for high-speed automobile infrastructure. With our virtual vacuum of public finance for such projects going forward, we need to ask: What’s the prognosis for more such transformative, big-budget efforts? And what methods work best to integrate ribbons of concrete into our communities?

Let’s look at some instructive examples. Seattle’s Downtown Freeway Park, designed three decades ago by Lawrence Halprin, bridged Interstate 5 with five acres of green space; the city’s more recent Olympic Sculpture Park by Weiss/Manfredi Architects and Charles Anderson Landscape Architecture, spans a waterfront arterial with an art-filled urban park. In San Francisco, removal of the Embarcadero Freeway after the 1989 Loma Prieta earthquake produced a grand boulevard, designed by ROMA Design Group, offering transit, bike lanes, promenades, and revitalized real estate. And the nation’s most expensive highway project—Boston’s Big Dig, which rerouted I-93 into a 3.5-mile tunnel through the heart of the city—left behind a 27-acre urban greenway reconnecting city to waterfront, a $15 billion price tag, and a mixed legacy of design flaws, accidents, and cost overruns.

Emerging projects continue to explore ways to tame the freeway. Dallas’ 5.2-acre Klyde Warren Park, designed by James Burnett and Jacobs Engineering Group, Inc. and due to open this fall at a cost of about $100 million, will bridge downtown’s below-grade freeway with new urban green space. Los Angeles is contemplating two plans for capping portions of the 101 Freeway with planted concrete lids—the 44-acre Hollywood Freeway Cap Park and the 80-acre Downtown 101 Freeway Cap Park. Funding is not yet secured. Cincinnati, St. Louis, and Santa Monica are also considering plans. 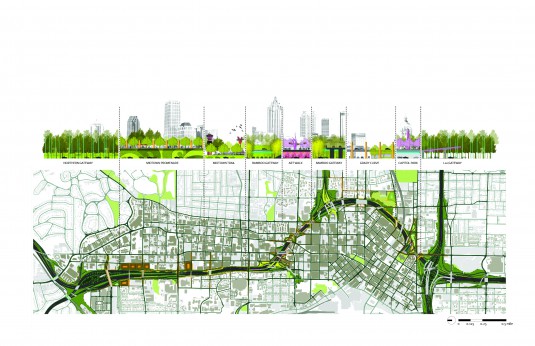 The Atlanta Connector Transformation Project provides another, less costly approach. Rather than burying, removing or covering up the I-75/85 Connector—a five-mile stretch famous for its snarl of traffic and frequent flooding that brings Atlanta to a standstill—the project acknowledges that the Connector will remain the city’s most significant and visible infrastructural corridor for the foreseeable future. Because of the realities of transportation funding, the project will not seek to make the Connector disappear; rather it will use the Connector as a transformative piece of the city’s open space network.

Begun as a collaborative effort between the city of Atlanta, Georgia Department of Transportation, Downtown and Midtown, the Atlanta Connector Transformation Project started as an effort improve the experience of the more than 300,000 people who travel along the Connector daily. The aim was to generate beautification and urban design strategies that will create a new front door for the city of Atlanta and energize the margins of this neglected corridor.

As lead designers, our Houston office translated these goals into the vision of a freeway moving through a green and lush landscape punctuated by art and new urban destinations. Embraced as an integral part of the city, this multi-functional corridor would express the dynamics and spatial characteristics of the region’s natural and cultural landscapes.

Today the Connector conveys a decidedly negative image. Built and rebuilt over the last 60 years, it took on a character divorced from that of Atlanta’s vibrant core. Academic institutions that line the Connector (Georgia Tech, Georgia State, Emory, and SCAD) turned their backs to it, and a “DMZ”-like zone of parking garages, vacant lands, and service drives developed between the Connector and the city it was intended to serve. 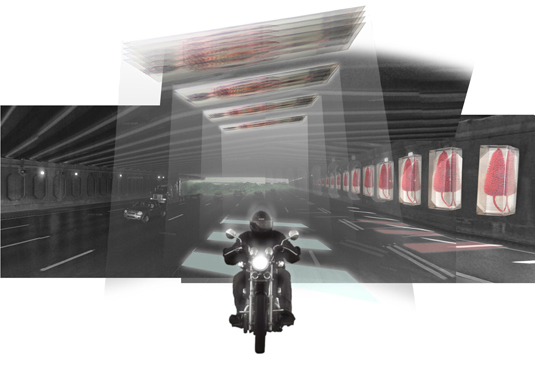 Our team, including art consultant Ian Cion and public engagement by Urban Collage, re-envisioned the Connector as a bold stroke of landscape infrastructure. It would provide a framework for art, landscape, engineering, and urban design. Our strategies involve greening, light, art and, ultimately, urban design interventions that will catalyze infill projects nearby. Rather than hiding or removing the freeway’s existing infrastructural surfaces, these proposals make use of it by modulating and recalibrating in a manner that adds depth and meaning to the Connector experience and, by default, the visual and physical experience of the city. 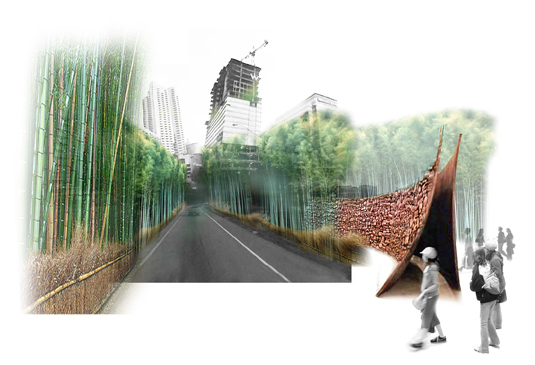 Greening strategies form the foundation of the transformation. Permeable spaces along the Connector’s margins and within its immense interchanges will support a vibrant, robust, and legible urban forest canopy. Forests will create gateways at the north and south entries into Atlanta’s urban core and follow threads of unused open space into the city’s heart, enhancing views, hiding vacant properties and forming a medium through which the city is viewed. Where space or safety considerations limit the use of forests, vertical greening will continue the thematic greening of Connector and city.

Inserted into the verdant green fabric are lighting and art elements designed to interact with and activate the surfaces of the Connector. Dramatic gateways crafted from the landscape announce arrival into the city and serve as a marker of a special place along a traveler’s journey. Lighting extends the effects, creating a shift in attitude from day to night.

The art of the Connector will create the Atlanta Museum of Freeway Art (MOFA), a first order art tourism destination whose mission is to elevate the national appreciation of art and freeway. The museum uses the complex spatial character of the Connector—retaining walls, bridges, tunnels, furnishings—to establish exhibit spaces suited to both the high-speed traveler and the neighborhood viewer. Supergraphic murals, lighting effects, slow motion video, and sculpture will highlight the natural and cultural history of Atlanta.

We feel that over time—and without costly structural changes to the freeway itself—the transformed Atlanta Connector will catalyze a future generation of neighborhoods, parks, promenades, trails, pedestrian bridges and development projects, forging new connections and reinvigorating old ones.

If you’ve experience the Connector in its present stage, tell us what you think of our plan.

Kinder Baumgartner is managing principal of the Houston office of SWA Group and Elizabeth Shreeve is a principal in Sausalito, CA.  SWA Group (www.swagroup.com) is one of the world’s leading landscape architecture, planning, and urban design firms.