Benjamin Hubert Mashes up the “Super Man-Made” With Old Craft

Benjamin Hubert has built his practice based on a research-led process. 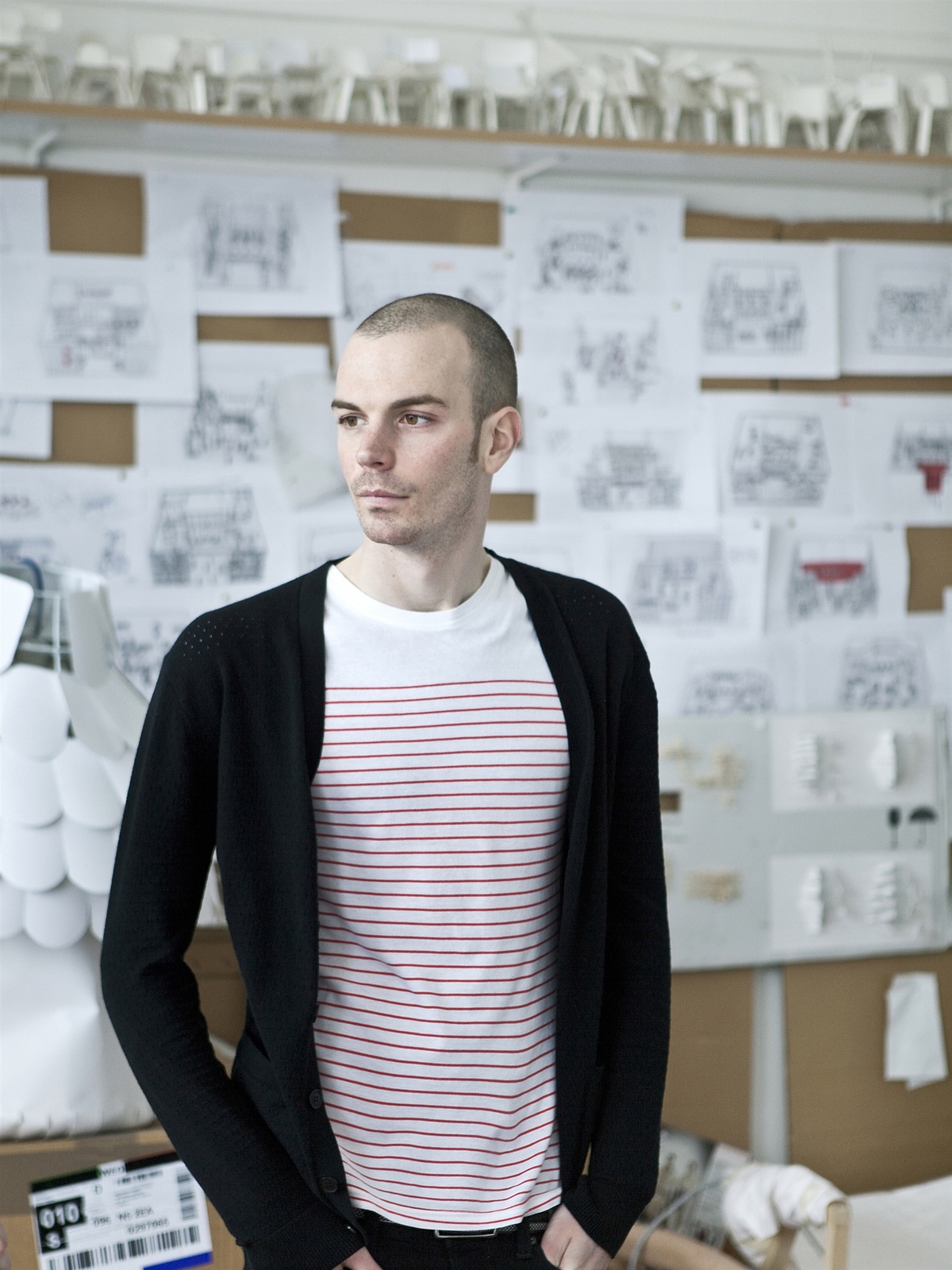 “Really big brands are starting to pick up the phone and quote our mantra back to us,” says the 28-year-old London-based designer Benjamin Hubert. The mantra is emblazoned across the home page of Hubert’s newly redesigned website: “Materials-driven. Process-led. Industrial design.” It’s a philosophy that permeates everything the young designer and his studio work on, beginning with an extraordinary amount of research into materials and manufacturing processes that dictates the form and structure of their sophisticated products.

For Hubert, the process of creating an object starts with hundreds of sketches, followed by dozens of models. If possible, he visits the factories, preferably with the client, so that everyone understands the potential of the materials. When he and his team were designing the Garment chair for Cappellini, for example, they spent weeks sewing bits of textile and trying to achieve different finishes. It always circles back to materials-driven thinking. “People who don’t understand the material will try and get it to do something that isn’t possible,” he says.

At this year’s Maison & Objet fair in Paris, Hubert showed his most recent project—the Container lamp for the manufacturer Ligne Roset. Made up of two large ceramic sections held together by an injection-molded silicone band (instead of glue or screws), it looks like a piece of refined tableware. “It was the idea of volumes,” Hubert says, “of utilizing the ceramics to contain the electronic components to produce a soft, reflected light from the glazed surface.”

Around the same time, Hubert also created a range of terracotta vessels for the Danish company Menu. Intended for storing food-stuffs such as pasta and grains, the pots have a sculptural elegance. “I was interested in bringing something that is normally on the edge of the kitchen counter to the center of the dining table,” says Hubert. All the vessels have rubber lids, echoing the Container lamp’s silicone band. “I like the idea of contrasting super man-made materials, like injection-molded plastic, with something really, really old and crafted—and that can be found in ceramics,” he says. This ability to innovate with quotidian materials has stood the designer in good stead.

In 2009, when Hubert opened his North London studio, he was already showing eight pieces at the London Design Festival—all of which were, impressively, in production. Two years later, at the 2011 International Furniture Fair in Milan, there were 15 different projects in the works for nine companies, including furniture for De La Espada and a chair for Casamania. At the time of writing, Hubert was busy gearing up for this year’s Milan Furniture Fair. He won’t say much more than that he’s doing some interesting things with mesh, and making chairs, side tables, and storage for a “really big Italian firm, a really nice German brand, and a Brazilian company with whom we have recently started working.”

Hubert puts as much energy into growing what he refers to as his business, as he does into designing lights, chairs, and accessories. Speaking at last year’s London Design Festival, Hubert said, “A designer’s name is incredibly powerful. Do one thing really well, talk about one thing really well, have a message, have an ethos, and keep hammering it home.”

Late last year, his studio redesigned its website to include an online shop. Though it doesn’t stock the larger products, the staff responds to all online inquiries. “It’s becoming an interesting part of the business,” Hubert says. When asked whether it takes time away from his design work, he says: “It makes some decent money, so it’s not that bad a distraction.” Hubert’s success at drumming up commissions outstrips many designers far older than him, and he is always ready for the next step. He recently decided to produce one of his designs himself: The Tenda lamp makes fascinating use of kite- and tent-making techniques and of meshes, which are Hubert’s current material fetish, one that we will see reiterated in Milan. “I was interested in doing something where I didn’t need to go through the lengthy process of showing it to a company and getting them to buy into it or not,” he says. Spoken like a true budding entrepreneur. 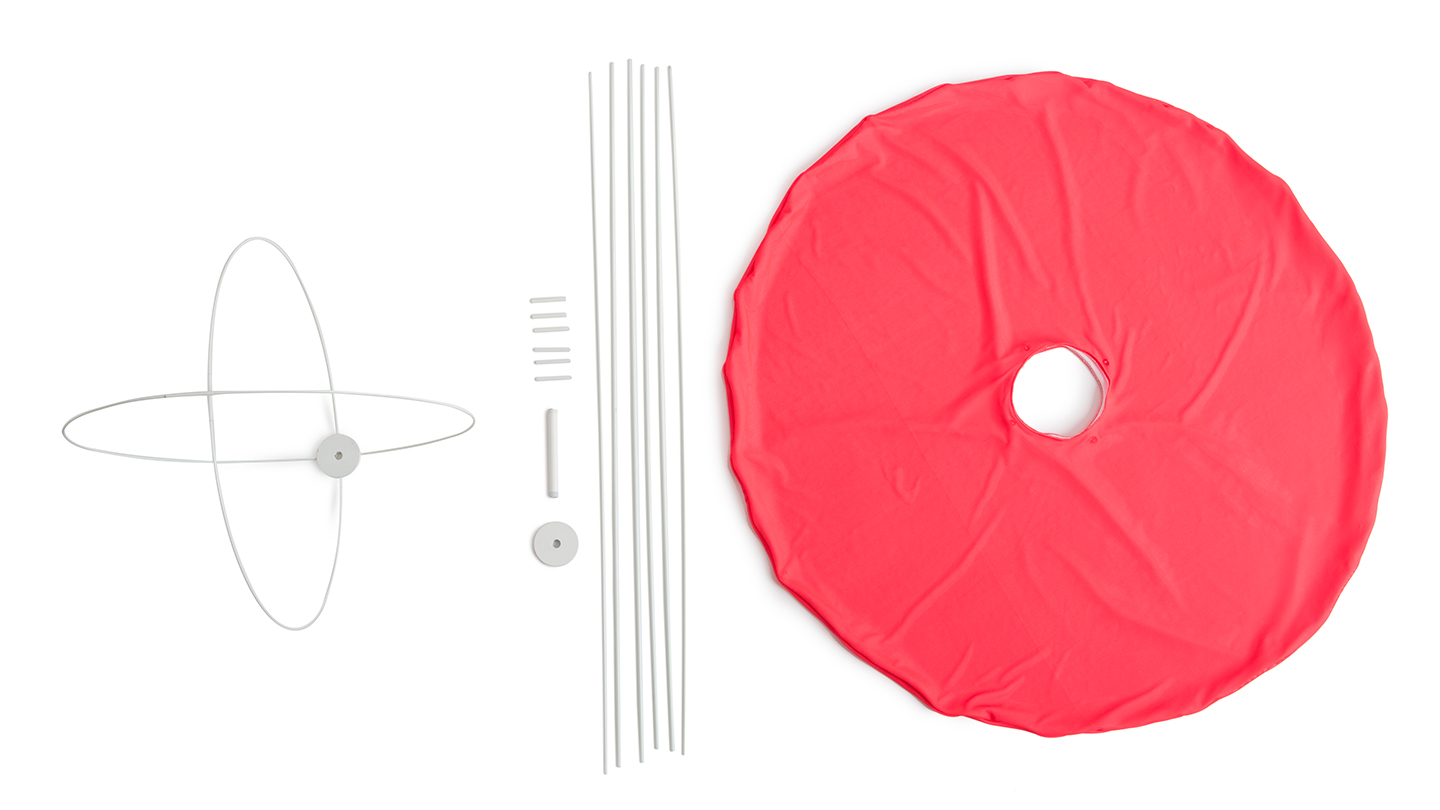 The Tenda makes fascinating use of kite- and tent-making techniques and of meshes.