Ingels and co. recently released details of the $2 billion plan.

To save a building, sometimes you have to tear away its foundations.

The foundations in question are underneath the Smithsonian Castle, a red sandstone 1855 structure anchored to a corner of the National Mall. The renovation is just one element in an elegant strategy developed by BIG and the Smithsonian Institution to revitalize its South Mall campus.

While many of the campus’s buildings are iconic, from the gothic castle to Gordon Bunshaft’s cylindrical 1974 Hirshhorn Museum, several of its galleries are quite literally hidden, tucked away underground. BIG was asked to overhaul the visitor experience for the largest museum and research institution in the world. The architects’ goal was two-fold. First, the intervention needed to reenergize public engagement with these subterranean spaces, which include the National Museum of African Art and the Freer and Sacker Galleries of Asian art. Second, it also had to connect the campus’s numerous above-ground buildings while remaining relatively low-key. 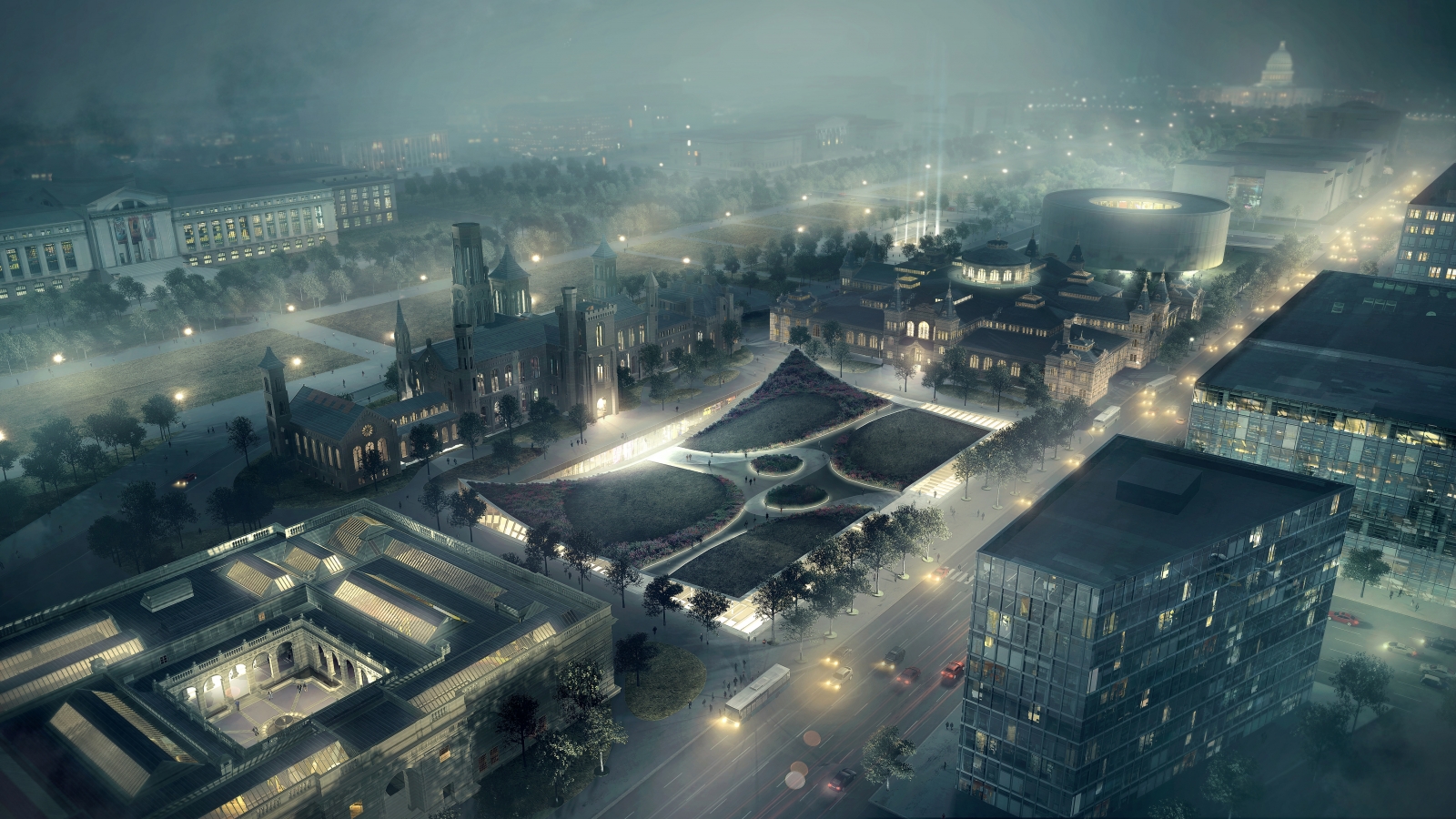 The project, seen here in context, will tie the Smithsonian’s campus and its several museum buildings together.

The year and half of planning entailed dozens of interviews—from curators to gardener caretakers—and balancing the needs of national, state, and city governments. BIG constantly reworked its proposal, presenting each new iteration to interviewees for feedback. “After 40-plus conversations, we were able to get a larger and more cohesive understanding of what was needed,” says project leader Daniel Kidd. “It was almost a form of design by democracy.” 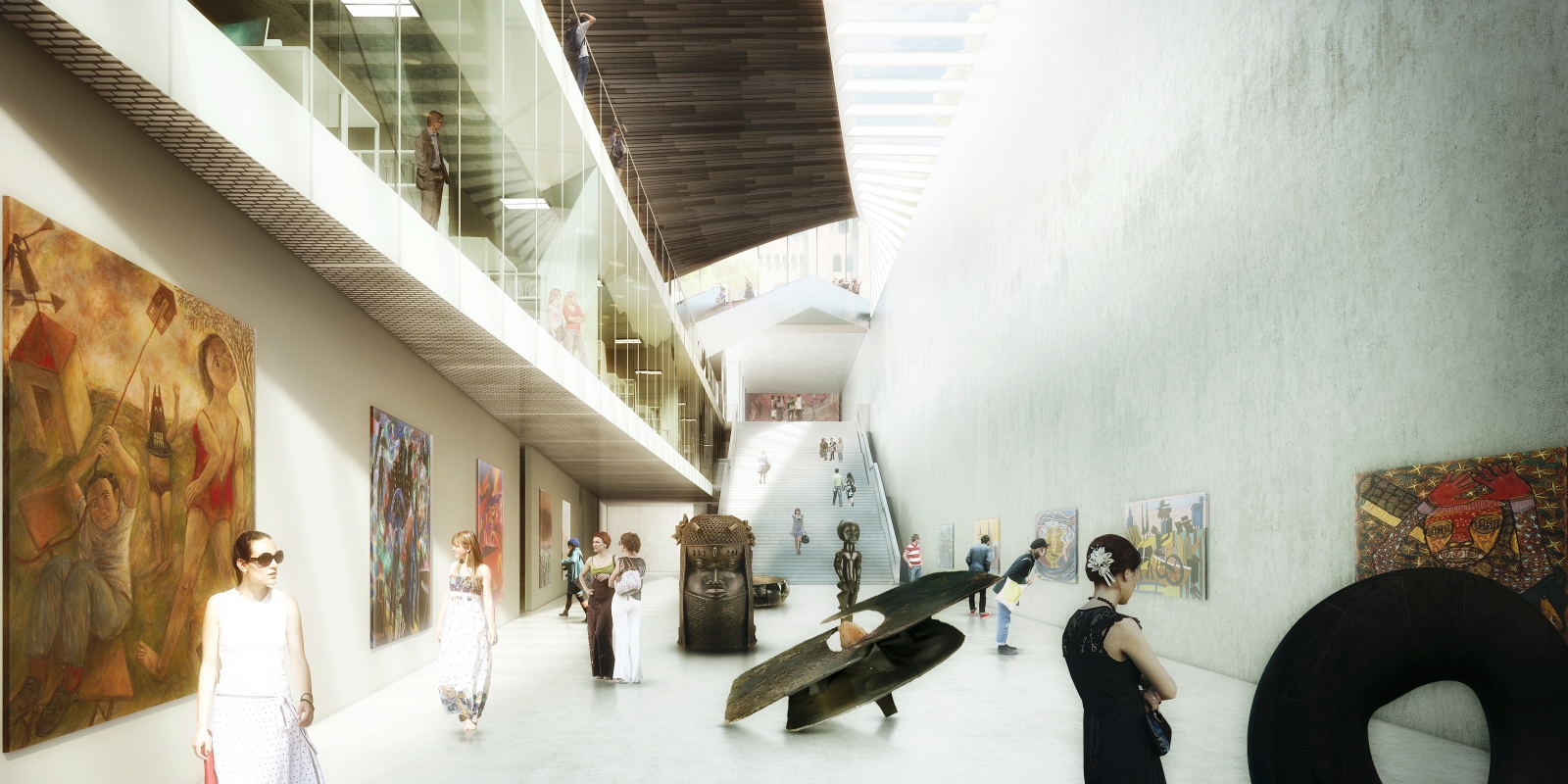 A subterranean gallery from the National Museum of African Art

The final scheme, estimated at $2 billion, comprises a series of new underground gallery spaces, centrally-located on campus and topped by a garden that connects all seven institutions. The edges of the garden peel upwards to reveal two corner entrances. Work on the foundations of the castle—technically the Smithsonian Institution Building—will safeguard against earthquakes and create more underground space for visitor services. The gothic structure’s Great Hall, previously divided by partitions, will be restored to its original layout.

The project transforms the castle into a gateway linking the Mall to the Smithsonian campus. As BIG founder and principal Bjarke Ingels has stated, the Mall is the primary source of visitors, making the castle’s prominent location critical to the plan. The new gardens and underground spaces don’t compete with the adjacent museums, limiting its architectural presence to the glass-framed entrances. Lastly, unifying all seven buildings’ mechanical systems, such as heating and ventilation, into a single underground facility will cut energy use by 34 percent. “The savings and efficiency are the product of newer systems,” Kidd explains. “But because they are almost at a district scale, they gain an economy of scale and are able to serve more building area with much lower cost and energy consumption.”

The next steps entail working with the National Capital Planning Commission and a public meeting to discuss the design in December.