I’ll admit I was a little skeptical when I cracked open Taras Grescoe’s latest book Straphanger, which is both paean to public transportation and an evisceration of car culture. Living happily car-free in New York, I feared I might be the choir to the Montrealer’s preaching. But while the book—part history, part travelogue, and part […]

I’ll admit I was a little skeptical when I cracked open Taras Grescoe’s latest book Straphanger, which is both paean to public transportation and an evisceration of car culture. Living happily car-free in New York, I feared I might be the choir to the Montrealer’s preaching. But while the book—part history, part travelogue, and part manifesto—might not seem terribly radical to city-dwellers, Grescoe makes the argument for mass transit in a way you might not have heard before.

In the course of writing Straphanger, Grescoe visited a dozen cities across the world and spent considerable time getting to know their transit systems, figuring out how and why they work (or don’t). After a short prologue in Shanghai, Grescoe starts his global commute in New York, where the subway system maintains a tetchy coexistence with street-level planning that’s historically favored cars over pedestrians. Subsequent cities each provide a slightly different perspective on transportation: Phoenix gives us a primer on the difficulties of low-density sprawl; Copenhagen is a model of bike-friendly infrastructure; Bogotá’s rapid bus system proves how quickly a mass transit network can be rolled out from scratch. 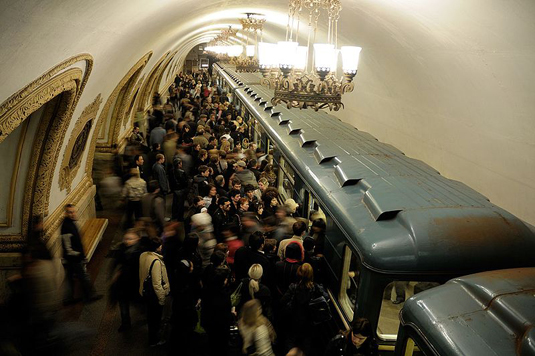 Despite being one of the most crowded transit systems in the world, Moscow’s Metro is endowed with spacious, luxuriously appointed stations. Image via Wikimedia Commons.

The case-study format makes for a brisk pace, and avoids the pitfalls of a one-size-fits-all approach to transportation. While Grescoe lavishes criticism on the hubristic, car-centric schemes of planners past (Robert Moses, Le Corbusier, and Frank Lloyd Wright all take turns as the butt of his disapproval), he also avoids aligning himself with any one ideology, advocating a sort of design relativism informed by the diversity of the book’s subjects. That diversity is echoed in the voices of other people—from municipal legislators to students he met on train platforms—that Grescoe mobilizes as counterpoints to his own authorial voice. His writing itself is unostentatious and, aside from a few analogies in which mythological figures do improbable things with unlikely objects (a favorite from page 20: “the tunnel … thrummed like Hades’ didgeridoo”), refreshingly free of the offbeat-memoir quirkiness authors sometimes fall prey to.

Straphanger tells a happier story of public transportation than most people get to hear; the places Grescoe studies are in marked contrast to the majority of cities, where transit networks are far less exemplary. But as an aspirational effort, the book has a couple of blind spots, too. Grescoe makes only glancing mentions of the issues of race and class that persistently intersect with planning and economic policy, and barely touches on how transit authorities are adapting (or, too often, not) to serve the elderly and people with disabilities. A more robust treatment of those concerns—and of the long histories of racism, classism, and ableism in urban planning—would provide richer fuel for Grescoe’s push toward better cities for everyone. 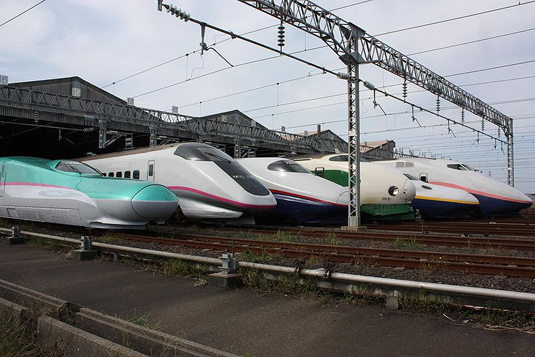 While the rail-based megalopolis of Tokyo has its own planning problems, Grescoe yearns for high-speed intercity railways in Canada and the United States. Image via Wikimedia Commons.

Ultimately, the book is more pragmatic than optimistic. Grescoe is frank about the chances of a high-speed rail network being built in North America anytime soon (spoiler alert: they’re not good), and frustrated by our seemingly intractable car culture, but his argument is well-researched and passionate. I’m not sure how convincing Straphanger might be for someone who lives in an area with inadequate transit options, but the book is a timely reminder that well-designed, walkable cities are both possible and, increasingly, necessary. Happily, it’s also redoubled my affection for the New York subway—even with its manifold quirks.