Boomspdesign Q&A/debate session with ( left to right): Mekal’s Chritian Kadow, architects Rodrigo Loeb and Rodrigo Ohtake, Luminaire’s principal Nasir Kassamali, architect Marcelo Faisal and event’s organizer Beto Cocenza.The everyday practice of design can be an isolated activity, with most communication limited to the parties involved in the projects we work on. And these days […]

The everyday practice of design can be an isolated activity, with most communication limited to the parties involved in the projects we work on. And these days most of this communication tends to be via some bland electronic means. So, in order to keep design current and relevant, we need to stay tuned to what’s going on outside our immediate circle, personal or electronic. We find these learning opportunities in conversations, such as the real time dialogs I experienced recently in Sao Paulo. 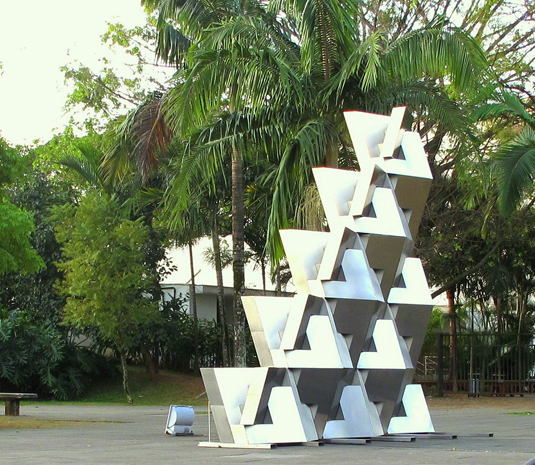 Each year the creative forum, BoomSPdesign 2012, brings together a diverse cast of multi-disciplinary guests, speakers, and attendees in Sao Paulo, Brazil. Throughout three full days and with a packed schedule (that usually extended to late nights) the event reminded me of a summer camp, with participants seeing each other often and having plenty of opportunities to talk shop. At lectures, coffee breaks, luncheons, we engaged in casual, yet insightful, dialogues with one another. For instance, Andy Klemmer from Paratus Group spoke of his role in the construction of the Guggeneheim Bilbao, Cyril  Zammit held forth on his DesignDubai fair genesis and development and then afterwards  exchanged ideas over “cafezinhos” (Brazilian version of espresso) on the challenges of showcasing design and art. 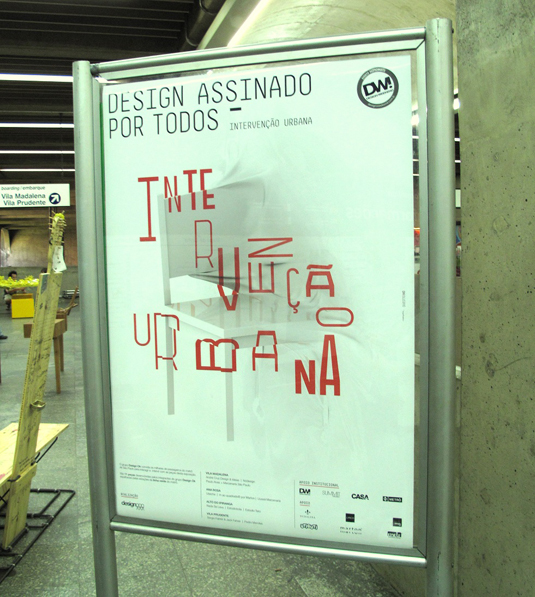 A good example of the collaborations possible from such meetings was the sculpture REACH by Dror Benshetrit who was commissioned by the Love & Art Children’s Foundation to apply his Quadror structural system to create a sculpture to reflect their stairway logo. Benshetrit connected with one of the conference’s sponsors, the stainless steel manufacturers Mekal which has been developing a project (“Fuori Serie”) to challenge themselves to flex their creative muscles in a bold way. Beyond bringing their manufacturing expertise, Mekal got the steel donated by the supplier Aperam (a subsidiary of the Acellor Mittal group that made possible the Anish Kapoor Olympics steel sculpture). The end of result, the finished “Reach” piece, was so successful that it became a central piece of this year’s BoomSPdesign events, proudly displayed at the renowned Brazilian Museum of Sculpture (an iconic design by Pritzker winner Paulo Mendes da Rocha). 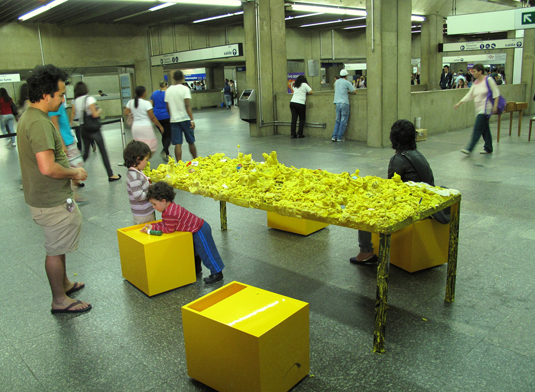 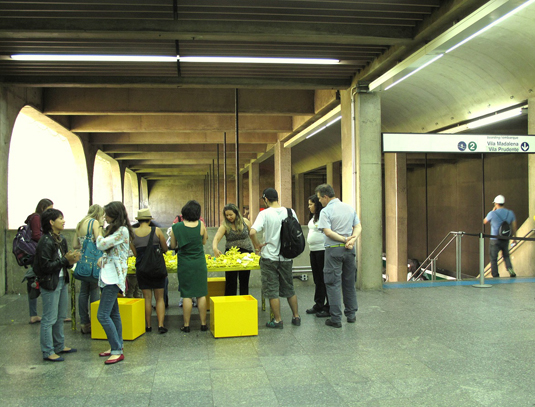 Mekal’s principals, Christian and Ken Kadow, understand the importance of keeping updated with the latest ideas and of learning about them directly from the source. Their support of the conference’s efforts went beyond the mere sponsorship or attending the festivities: They were present at every lecture and event, engaging in the dialogue as it happened. “Beto’s event,” says Christian referring to Beto Cocenza, BoomSPdesign organizer,  “manages to get a vertical slice of the international design world together, from the creatives to the media, manufacturers and public, and for us the [resulting] exchange is a very valuable resource.” 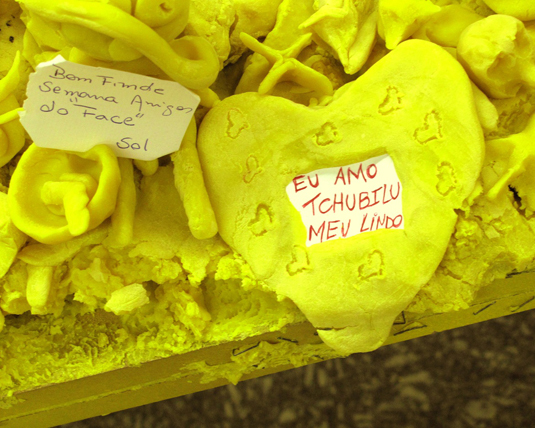 Another form of public design dialogue was happening at some of Sao Paulo’s busiest train stations. Developed by the collective DesignOK for DesignWeekend, a new design fest that premiered this year with ambitions to bring design to a broader audience, the collective asked its designers to come up with ideas that could spur interactions with everyday commuters, on an urban scale. Thus  “Design Assinado por Todos” (Design Signed by All) as the effort was called, brought together 11 projects conspicuously displayed at 4 main subway stations. 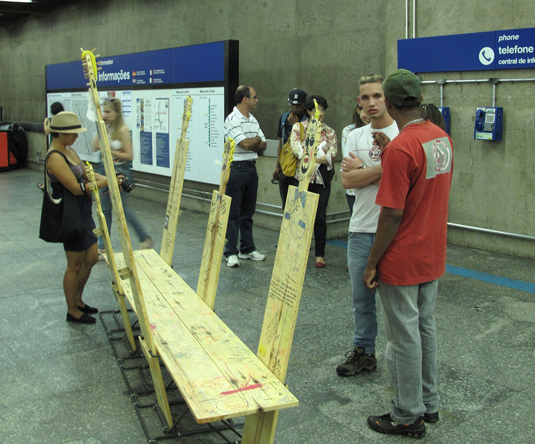 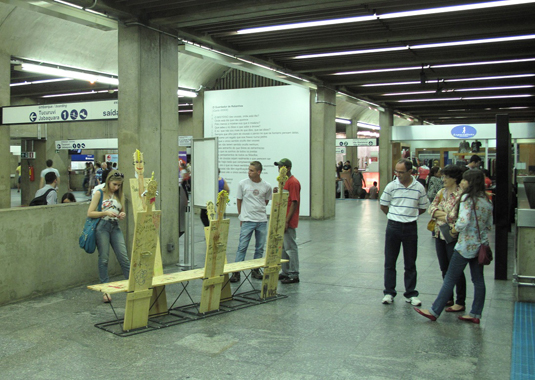 Commuters checking out wood bench by Pedro Useche for DesignOK at subway station.

These projects went in the opposite direction of today’s market trend of making design more and more exclusive.  Everybody was invited to pitch in and take part in creation and use, the original design serving solely as the starting point. One such piece was a dinning table covered in yellow play dough with side containers filled with extra dough for everyone to play with. Developed by the designer Jose Marton with kids in mind, the chance to take a play break while in the rush from one place to another ended up appealing to all ages, people of all ages let their imagination loose, even if just for a few minutes. “From the pens we use, to sidewalks we walk, design is in everything we touch and do – we wanted to highlight that awareness to people,” says Marton. The initiative was so popular that the play dough containers had to be replenished throughout the day. 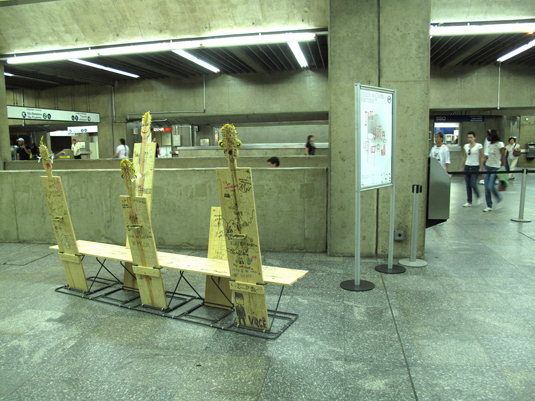 Wood bench by Pedro Useche for DesignOk at subway station.

Close by the yellow soft table, another piece by designer Pedro Useche stimulated face time, literally: A long wooden bench, composed by a running seat and with alternate back rests that face in opposite directions, caused users to face their sitting neighbors. The result was unexpected laughter and casual banter. Pens and pencils were left out for users to write messages or just leave their signatures on the bench’s wood surface. “Our goal was to present design in various formats, from the professional to the commercial and to more conceptually artistic ones like these,” Lauro Andrade, organizer and founder of DesignWeekend, told me. “The idea is to reach a wide range of people that don’t usually think about design in their lives.” 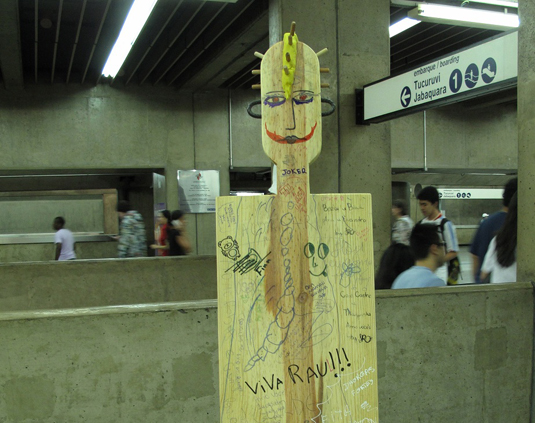 Detail of back seat of wood bench 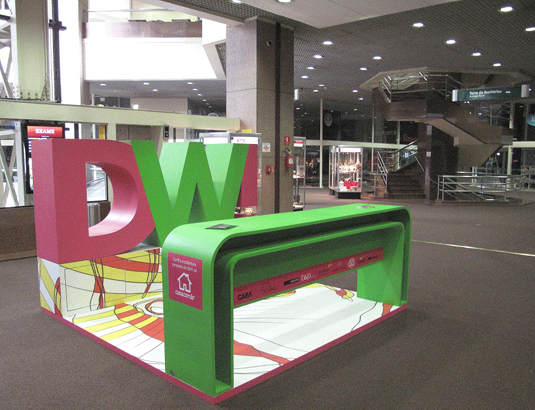 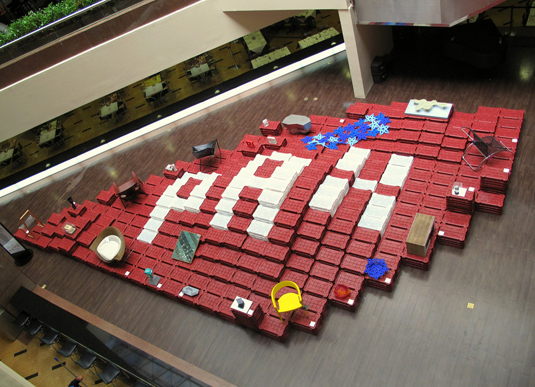