Hurricane Sandy has invoked a lot of change. Whether it’s coast lines or politics, we have experienced first-hand what scientists, planners, and architects have been warning about for years, that a storm like Sandy was going to happen. “Sometime between now and 2100, a storm will dump 18 feet of seawater into lower Manhattan, flooding […]

Hurricane Sandy has invoked a lot of change. Whether it’s coast lines or politics, we have experienced first-hand what scientists, planners, and architects have been warning about for years, that a storm like Sandy was going to happen.
“Sometime between now and 2100, a storm will dump 18 feet of seawater into lower Manhattan, flooding much of the financial district, Battery Park, and most of the subway stations south of Rector Street. Six hundred oil tanks in Bayonne, New Jersey, will be inundated. And all but a nub of Liberty State Park, the landfill opposite Ellis Island, will disappear into the harbor. That’s the grim forecast for New York.”
The above quote comes from Suzanne LaBarre in her 2010 blog post, Hope Floats, where she describes MoMA’s Rising Currents exhibition “as an optimistic rebuke to the government’s stopgap approach to public infrastructure. Whereas the U.S. Army Corps of Engineers erects concrete dams and levees, these architects favor broad solutions that reconfigure the social, economic, political, and natural landscape.”

An image from the MoMA Rising Currents exhibition,
Courtesy of Scape Landscape Architecture

LaBarre rightly calls out how the Rising Currents exhibition took sustainable and creative approaches to dealing with cataclysmic storms like Sandy. The ideas in the exhibition illustrated concepts that would help create resilient communities; communities that are not only physically safe from the water’s wrath, but stronger socially, economically, and environmentally

One example from Rising Currents, the illustration above, depicts an oyster-based ecosystem that creates benefits beyond just protecting our communities. Neil Chambers, founding architect of Chambers Design, has written a blog series called Re-imagining Infrastructure, which looks at the growing practice of oyster-tecture, a term coined, if not popularized, by the Rising Currents exhibition.

These forms of ecologically-based infrastructure are, or soft infrastructure, are important concepts for cities looking to become more sustainable. Socializing Sustainability, a blog post by Amrita Raja, talks about the importance of open space for people living in urban environments. She discusses the Rising Currents exhibition as having “provoked questions of how parks operate in our urban landscape, asking why the “park in the city” cannot become the “city of the park”. She refers to the idea that ecosystem features can be integrated into the urban fabric. This idea of a city becoming like a park is not new, but the idea of our waterfront parks functioning as “soft” barriers is.

Brooklyn Bridge Park is a great example of an ecologically-based barrier that creates space for people while providing multiple benefits. Designed by Michael Van Valkenburgh Associates, the park was flooded during Hurricane Sandy, and while a great deal of construction equipment and damage was done, it wasn’t nearly as devastating as the flooding in residential and commercial areas like Red Hook or Gowanus. Replacing residential and commercial land uses with spaces safe to be flooded is a technique called managed retreat. 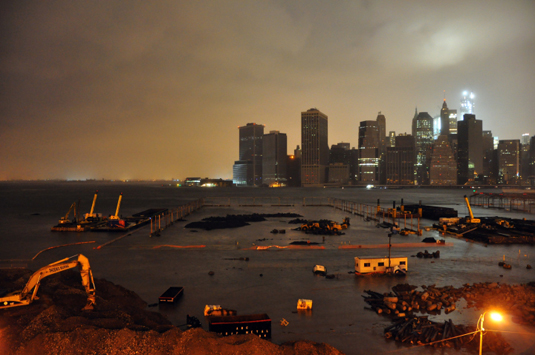 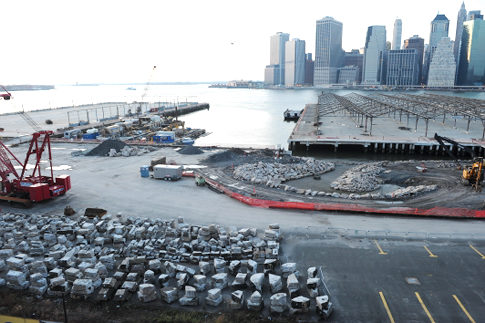 View of Pier 3 (left) and Pier 2 (right) prior to the storm,
Image courtesy of the NY Daily News 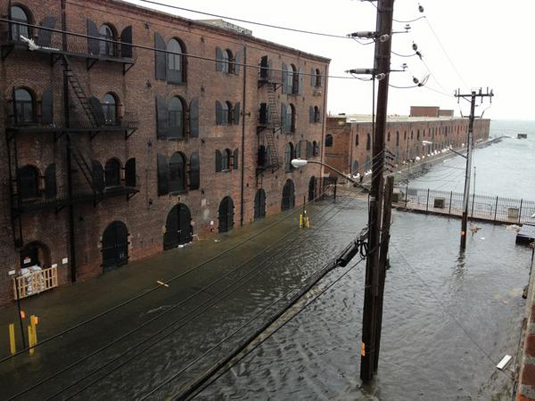 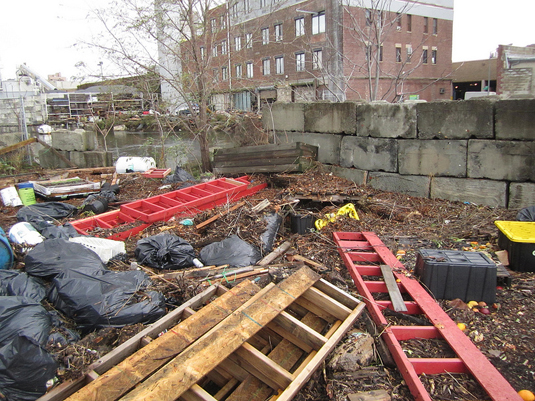 These communities lost power because the water flooded their basements and first floors. During the storm water was a huge issue, because people couldn’t get out of their buildings easily. So how does a city, with some of the highest real estate values in the country, make use of its waterfronts for both commercial and residential use and also keep people safe, keep the power on, and permit life to continue even if the water rises? Stay tuned for my next post that will discuss design examples that demonstrate more resilient waterfronts.

Ryan A Cunningham is an employee of Metropolis Magazine; he has his MS in environmental city planning, specializes in resiliency research, and has experience working with New York City’s coastal communities.