Dead Ends Are Part of Any Good Design Process

Most design competitions are won by entries with a narrow focus, as architects know only too well. There is simply no time to work through all the issues and tell a comprehensive story. The goal is to unearth a single idea and then work to present it in the most compelling fashion. Those who try to design too much fail. Those who concentrate on a succinct scheme, succeed.

When we began working on the Office Building of the Future Competition we realized that this was one of those game changing assignments, and it needed a completely new approach. Only by integrating a variety of issues such as engineering systems, site constraints, market forces, and architectural design could we hope to understand the challenge facing us. How then, could we achieve this integrated concept with limited time and resources? We called our friends and some of our most trusted consultants: Mark Tamaro at Thornton Tomassetti for structural engineering; Christian Agulles at WSP Flack+ Kurtz for MEP Engineering; and Paul Totten at Simpson Gumpertz & Heger for building enclosure consulting. We fully expected to have to “sell” them on this project.  After all, we wanted them to donate their most valuable commodity, their time. Their response was quick and definitive. Not only would they work with us, but they were excited by the prospect.

What followed was an extraordinary brainstorming session. We set the agenda by identifying three basic themes as the drivers of the design: human need, building and human performance, and construction/fabrication. Time and again we would return to these touchstones to test our ideas and assumptions. The conversation included a precedent review, other innovative design proposals and inevitably, our own personal musings. This time the discussion was measurably different from the typical architect-engineer conversation. While we normally place layer upon layer of restrictions on the engineering design; budget limitations, space constraints and of course architectural design goals, we knew that this approach would be inadequate to the task at hand.

Although initially we found ourselves advocating for experimental architectural solutions, we discovered that our greatest challenge was to remove our own bias of what was “reasonable” or too costly. Mark Tamaro reminded us that construction today is still remarkably dependent on manual labor, but this does not describe the future.  Increasingly, construction is modular with large portions of buildings prefabricated in factories under controlled conditions and then brought to the site for assembly. And so the concept of “stick built” is being replaced by “factory fabricated.” We explored a number of different structural ideas including a rather interesting lightweight concrete, cast-in-place system, affectionately referred to as a “bubble slab.” In the end we settled on an elegant clear span, lightweight pre-cast concrete panel assembly, fabricated in a computer-controlled environment, with perforated trough beams designed to receive MEP systems. The result was a significant reduction in construction time and higher floor to ceiling heights, as compared to a typical steel frame structure. 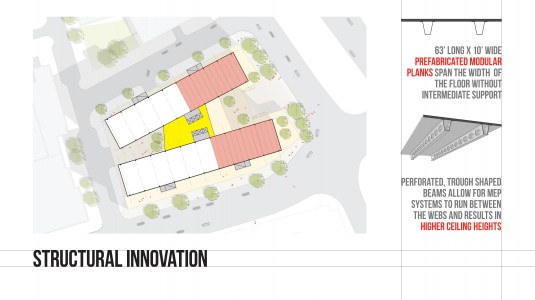 WSP Flack+Kurtz brought a full team to the table, including their Built Ecology group, specialists in innovative design proposals. We tried to integrate a number of different scenarios for the building’s mechanical systems but at the eleventh hour we changed direction and chose a buoyancy-driven HVAC system. This system relies on the natural tendency of airstreams to flow downward or upward when cooled or heated relative to ambient temperature. The engineers’ experience with net-zero buildings was crucial, especially when you remember that our national energy infrastructure, with its large centralized plants and long distribution networks, is now known to be highly inefficient. So we postulated that it makes more sense to generate the energy on site, through wind, solar, hydrogen fuel cells or geo-thermal wells.

The most striking design feature of our proposal is a highly sensitive building envelope that responds to the conditions of the environment. Harnessing new cross-disciplinary research on smart polymers, we proposed an envelope consisting of two layers: the inner layer serves as the weather-tight barrier while the outer layer adapts to ever changing sun conditions. Paul Totten from SGH was critical in encouraging us to think about adaptability, as well as the integration of innovative MEP strategies like the solar chimneys employed by the Manitoba Hydro headquarters in Winnipeg, Canada.

On a parallel path we asked Janet Davis of Steelcase to tell us about their latest research in work place design and what kinds of furniture will likely be needed in the future. She told us that the number one reason for coming to work is “to see and be seen.”  While some of us may choose to work at home, periodically or permanently, the vast majority will need the stimulation of others, both for social and professional reasons. People learn more when they work face-to-face and when they can pass each other in the hall or on the way to the pantry. How, then, can we hope to weave such disparate requirements into a comprehensive architectural design proposal for the Office Building of the Future?

We decided to develop two floor plans:  one strategy explored the modularity of furniture systems and work styles; the second strategy was to deconstruct a traditional center core floor plate and rearrange its parts, prioritizing natural light, flexibility, and column free space.  Ultimately we arrived at an “H” shape configuration with narrow floor plates connected by the building’s core. This external core would also house our public “third spaces,” each of which would have a distinct character. 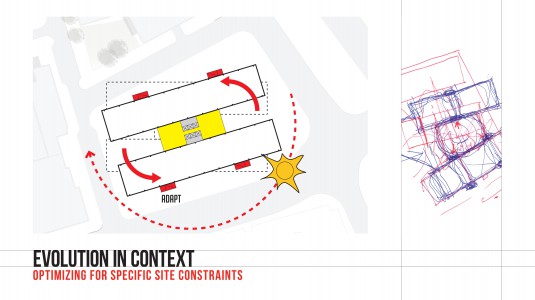 “Sausage making is messy,” as one of my colleagues likes to say. And so was our process. It included a few evolutionary dead ends as we reconciled different systems and design ideas into a comprehensive proposal. At the end of the day and with more than a few late nights, we were able to wrangle all the components into a comprehensive and integrated vision. Consistent with the work style of the future, with its collaborative nature, it took a collaborative effort to help us imagine the office building of the future. Together we put forth a vision that reflects the latest thinking and advancements in new materials and systems; and in the process we grew to appreciate the hard work, dedication, and unique contributions of our fellow design professionals. In our next post we will elaborate on the collaborative design process as well as the critical role that our young designers played in our successful competition entry.

Mark Ramirez, Associate AIA, is associate principal at Hickok Cole Architects in Washington, DC and project director for the firm’s Office Building of the Future Competition entry sponsored by NAIOP.