Nestled between the quaint urban scale of Carroll Gardens and edgy Red Hook and under the shadows of the Brooklyn-Queens Expressway (BQE), stands The Delta. This new building aims to be an example of the most sustainable project in the city as well as to become an educational tool to promote that movement.Built on a […]

Nestled between the quaint urban scale of Carroll Gardens and edgy Red Hook and under the shadows of the Brooklyn-Queens Expressway (BQE), stands The Delta. This new building aims to be an example of the most sustainable project in the city as well as to become an educational tool to promote that movement.

Built on a triangular plot adjacent to the footprint of the BQE, on Hamilton Avenue, the Delta is the brainchild of Voltaic Solaire, a Brooklyn-based company that specializes in alternative energies; they are contractors who design and install solar and wind energy systems around New York City and beyond. Founding partners Carlos Berger, Ron Faia, and Mark Robinson decided to combine their eclectic backgrounds (Air Force skilled technician, real estate development, and designer for Ian Schrager Group respectively) on a project that would bring together their experiences and apply it towards their common passion: the environment and its future. 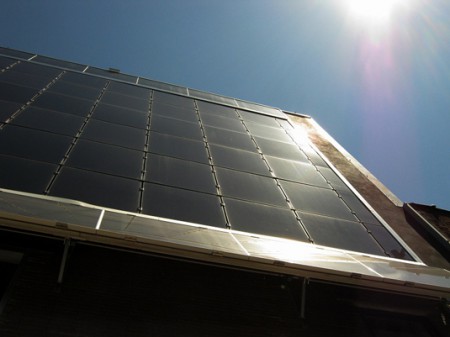 With this in mind they set forth to create what became the Delta–a building that would have a longer lasting impact than its immediate residential function. For it to become an example and learning center in eco-friendly and energy self-sufficient development, they decided to rent out its units for the short term and to make the building accessible for visitation and possibly for hosting seminars and workshops on the topic of building green.

“Many people think that renewable energy, green building, energy efficiency is impossible in NYC. That’s simply not the case. With our building and the speaker series we’ll be running, our goal is to share what’s possible,” Chris Williams told me; he will be coordinating the tours and talk series. Chris is the sales consultant for Voltaic Solaire and he runs HeatSpring, a renewable energy training company. 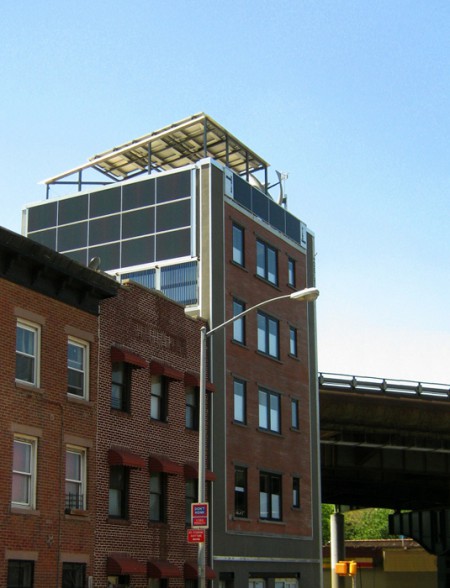 The elegant 3,000 sq. ft., five-floor structure is clad in re-appropriated brick that creates a façade which fits well within its context yet has a contemporary feel about it. It features one studio and a triplex unit, plus a storefront at ground level. The attention to the sustainable approach was present throughout the whole process, from design to construction, special care being taken to minimize material waste. From recycled cement aggregate to door handles made of aluminum scrap, from kitchen and bathroom tiles recycled from a local supplier that was about t dump them into a landfill, calling the tiles damaged and “unmarketable” to low-water-consumption faucets, nothing was left to chance. Sustainability was taken seriously at every turn. To make the energy consumption lower, microwaves and stoves are 220v using 1/3 the electricity of 110v products. Additionally, the air conditioning and heating systems operate under 220v, further reducing the property’s power intake. The lighting, of course, is mostly LED and consumes 75% less than usual. Overall, the building requires about 50% of the energy to operate than other buildings of its size do. 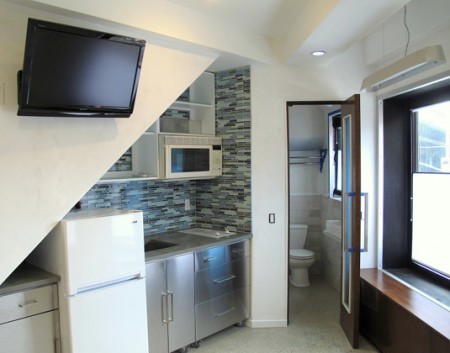 The project’s main achievement is the creative use of alternative energies. It’s 100% solar powered. To achieve this goal five different solar power systems were used (10.3 kw of solar power, captured via 4 separately located panel sources, and 120,000 BTUs from solar thermal which directly transfers sun’s heat to usable water and radiant heating in the winter). A thin film solar capturing system doesn’t require direct sun and offers great architectural possibilities: being ultra thin and transparent it can turn a glass wall into an energy producing source while still allowing vistas of the neighborhood. 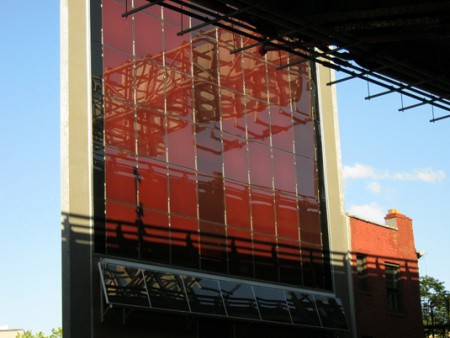 From the business perspective the group is determined to prove that building green in a dense city is feasible. “Between the considerable lowering of prices of the solar panels recently [a market response] and the tax incentives set forth by the Obama administration, we will have a substantial part of the investment offset in a very short time,” Ron Faia told me. But also mentions that they did not encounter as much support as they were looking for from the city, in terms of fiscal breaks. And local codes forbade them to use wind turbines that turn on a vertical axis on the rooftop. (The 25-foot clearance radius that the city code allows for large, warehouse type buildings, do not apply to buildings the size of Delta.) Wind turbines would have produced an extra 600 watts of useful power. 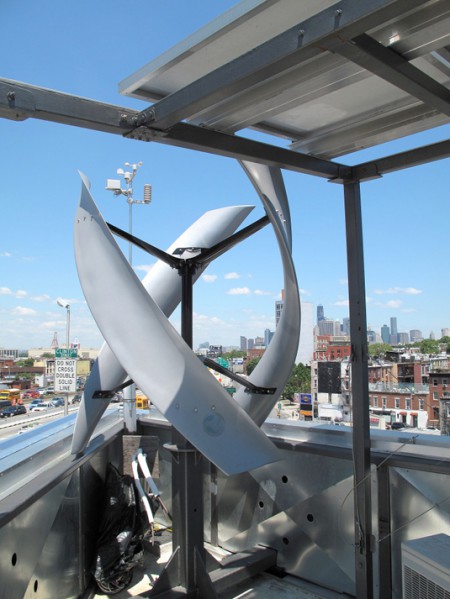 The partners see their project as a culmination of a protracted learning curve they’ve been developing as experts in alternative energies. Already in progress, a few miles east of the Delta, is a further refinement of their growing expertise. The Park Slope Townhouses will be a stylish energy-neutral project.

The Delta is a living example that sustainability is a reality, within our reach, no matter what budget and scale we face. It is no longer an expensive luxury after thought. It is now a thoughtful approach to good design and smart construction. 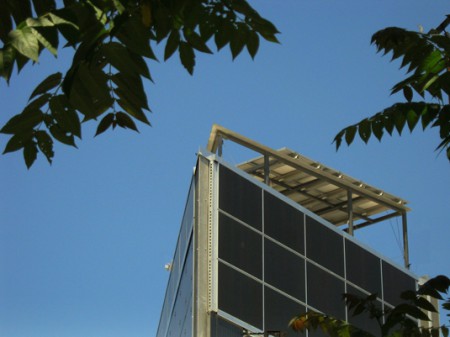 In thinking about the enormous needs of the thousands of energy leaking buildings in New York City, I see the Delta as a beacon of hope for what our real estate industry can become.

Paul Clemence is an award-winning photographer whose work is part of many collections, including the Mies van der Rohe’s Archives and house by MoMa, New York.  He exhibits  both in the US and on the international fine art circuit, from classic B & W prints to large scale photo installations. A published author, his work can also be seen in major design and lifestyle publications. His “Architecture Photography” Facebook page receives over half a million hits monthly.

All photos by Paul Clemence