There were too many things vying for the audience’s attention at the “Why Design Now?” conference hosted in New York City on October 1st by the Cooper-Hewitt, National Design Museum and GE. It was hard enough staying focused on the speakers, when you could see the dramatic vista of Columbus Circle behind the stage. But […]

There were too many things vying for the audience’s attention at the “Why Design Now?” conference hosted in New York City on October 1st by the Cooper-Hewitt, National Design Museum and GE. It was hard enough staying focused on the speakers, when you could see the dramatic vista of Columbus Circle behind the stage. But my attention also kept wandering to the live twitter feed  projected on the wall to the left of the stage. And apparently I wasn’t the only one. Two hours into the event, @DesignObserver’s tweet showed up on the wall: “More people watching the twitter feed wall than the speakers at Why Design Now?”

The conference was more or less an extension of the theme of the National Design Triennial, exploring new directions for design in a global scenario. Panel discussions took up most of the day. Speakers probed the themes of data visualization, sustainability, design for the developing world, and design for healthcare. The proceedings were streamed online, and the organizers encouraged the use of the hashtag #designnow for tweets about the event. So tweeters around the world kept up a running, live commentary throughout the day, their chatter sometimes more engaging than what was being said on stage. 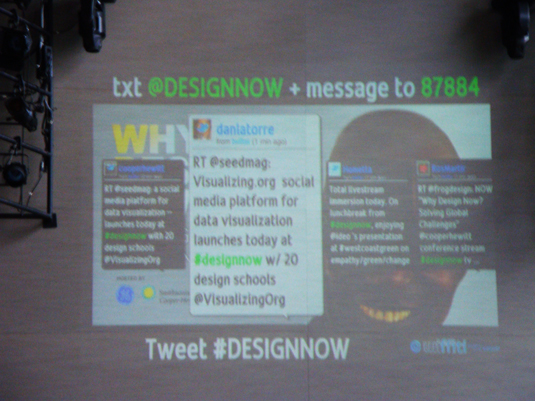 The words of the speakers echoed across the twitterscape, showing up repeatedly as re-tweets on the feed wall. By the end of the day, I was sick of reading over and over again that Don Formosa, the founder of Smart Design, had stated the painfully obvious “Design is about people, not things.” Quotable quotes took up most of the conference’s tweetspace, their pithiness eminently suited to being captured in 140 characters. But this is not to say that there wasn’t some pretty blunt live criticism.

The panel discussions frequently took the form of monologs about design projects, while we, in the audience, had nothing to look at other than the traffic moving along Broadway.  There was a special irony in making Pentagram’s Lisa Strausfeld talk about data visualization without any visuals. Finally, an exasperated @LindaTischler tweeted what we were all thinking, “Need pictures!! Design conf without images is half a loaf.”  And then, when Chuck Pelly, the founder of DesignworksUSA, opened up his rather complex powerpoint presentation, @swissmiss couldn’t help but exclaim “Wow, we are going from no visuals to super dense ones.”

The discussion on Design Without Borders, dealing with projects in the developing world, proved especially contentious. João Geraldo Ferreira, the president and CEO of GE Brazil, opened with the statement, “The markets in the developed world are saturated,” frankly suggesting that the interest in the developing world may be more economic than altruistic. This rather pragmatic viewpoint drew ire from idealistic tweeters like  @DesignExplorers, who immediately shot out, “Slightly frustrated with #designnow conference. Discussion is corporate and market driven. Where are links to the Museum exhibit n dev wld?”

Indeed, in many ways, the conference drove home the idea that business was very much the backbone of the new, socially-responsible design. After designer Stephen Burks had presented his vases and coffee tables, made by artisans in places like South Africa and Senegal, he said something that was instantly retweeted by the online hordes – “In Italy, designer is auteur. In America, design is a function of business.” Burks was declared an instant hero by tweet. (@alinaalvarez: “I want to be Stephen Burks now.”) Nobody raised an eyebrow at his claim that he could fly in, spend ten days with a craftsperson in a developing world, and bring their products to the global market. Nobody, that is, except our favorite tweet-skeptic @DesignExplorers, who asked, “One question to Burks. What is the return for developing countries?”

Two speakers stood out in a long line of picture- perfect case studies.  The first was Timothy Prestero, the co-founder of Design That Matters, who presented his “Car Parts” baby incubator. Though the entertaining talk was full of tweetable pronouncements on the developing world – “Five C’s you can get anywhere in the world: coffee, coke, cigarettes, condoms and car parts” – Prestero took the pains to explain the laborious process behind developing a single product for a foreign culture. The other impressive speaker was MAYO clinic’s design director Lorna Ross, who wasn’t as popular with the tweeters. As a designer working with hundreds of physicians, in a potentially life-and-death situation, she tried to put the role of design in some kind of perspective.  But her quiet call for idealism tempered with professional humility was lost in the general chest-thumping.

For a conference that began with a question, the tone of the day was surprisingly non-interrogative. The general idea seemed to be that glibly named panels constituted an answer: “Why Design Now?” because “Design Without Borders” is your “Passport to Innovation.” Thankfully, the organizers added another dimension with the tweet wall, for it is the twitter conversation (conveniently archived here) that offers any kind of food for thought. We need design now because this is a world where a group of designers may be making  twenty minute presentations in a fabulous hall in New York, but the real conversation is online, 140 characters at a time.