The newest Design Hotels project in Ibiza is an unlikely union of pastoral respite
and ideas exchange. 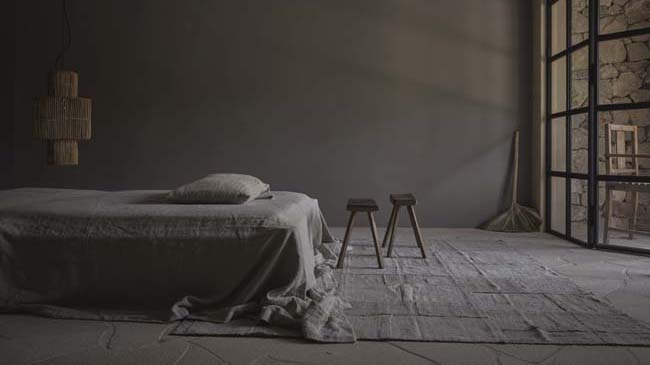 Claus Sendlinger has always been a little bit ahead of the game. In the early nineties, when he first had the inkling for his company Design Hotels—a curated collection of independent hotels across the world—the term “boutique hotel” had barely registered in the hospitality vernacular. Almost 25 years later, the moniker now borders on trite, as hoteliers (both seasoned and postulant) flood the market with new properties, many of which possess a certain mundane sameness.

“I’ve always looked outside the hotel  industry for inspiration,” Sendlinger says. “I’m not such a fan of hospitality conferences, because there’s nothing new. It’s just like different colors of the same thing.”

When contemplating his next Design Hotels–branded project (following on the heels of Papaya Playa in Mexico and San Giorgio Hotel in Greece), two key trends caught his attention. First, he had been quietly observing how membership-based workspaces such as Soho House and NeueHouse have influenced cities. And he was also intrigued by the evolution of festivals like Burning Man, which commingle music, art, community, ideas, and self-development. Somehow those two concepts cross-pollinated in his mind and manifested in an unlikely place: a rustic farm on the Spanish island of Ibiza.

The Dutch owner of the 200-year-old property had approached Sendlinger with a plan to create an art hotel that would become part of the Design Hotels collective. But Sendlinger had other ideas. “I said, ‘Look, there are thousands of art hotels—you have a complete gem and so you can forget the art.’” What he envisaged instead was a holistic hospitality concept that would be both a relaxing retreat and a community platform for the sharing of ideas, similar to the Burning Man festival—or a bucolic version of TED.

La Granja, as the project became known, welcomed its first guests in August. Visitors concerned that their quest for respite might be disrupted by Ibiza’s reputation as a hedonic party destination needn’t worry—it’s all pine forest, citrus groves, and countryside in these parts. The only sensory stimulation is likely to be beguiling breezes carrying the aroma of ripe figs, spicy pine, and wild sage, lavender, and rosemary, seasoned with a hint of sea salt and warm earth.

At La Granja’s center sits an old stone farmhouse—a blend of Iberian and Moorish architectural styles—with an aesthetic that is far from the usual polished veneer of a luxury hotel. Instead, the rustic interiors are evocative of a moody Vermeer tableau—milking stools tucked under monastic wooden desks, coarse stucco walls, tile floors, and dark wood-beamed ceilings. Furnishings in the nine guest rooms and separate guesthouse are mostly crafted from natural materials like wood, linen, and hemp, while other striking details include sculptural stucco fireplaces, hammered iron doorknobs, and stone basins with brass taps. 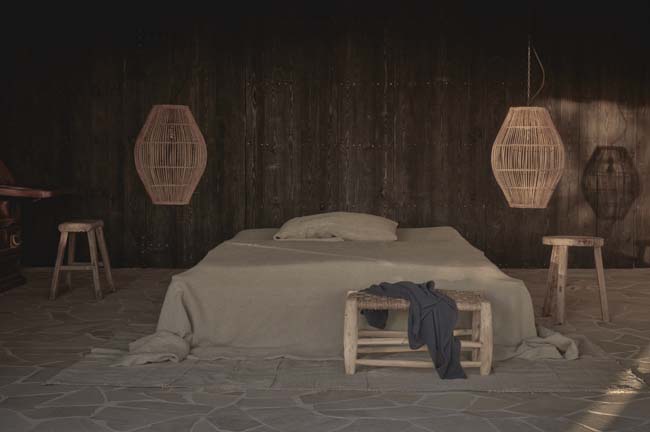 The rooms and suites at La Granja pay tribute to the property’s long history. Designer Armin Fischer recalls that his first impression of the farm was how silent and peaceful it was: “The 200-year-old farmhouse, with its weather-tanned rough stone facade, exudes calmness.”

If the raw, rustic aesthetic looks familiar to guests who have visited previous Design Hotels projects in Mexico and Greece, it’s because it’s Sendlinger’s particular favorite. The style has been his design go-to ever since it first caught his eye when he visited the Axel Vervoordt–designed penthouse in New York’s Greenwich Hotel. Unfortunately, the rest of the industry is slowly catching on to it. “Our suppliers are more sold-out than ever before,” he laments briefly. “But then again, the way you can expand in that world is kind of limitless.”

The project’s designer, Armin Fischer of Dreimeta design studio, intentionally emphasized the building’s time-weathered scars. “Simplicity and the art of imperfect beauty guided each decision in the design process,” he says. “It was about accepting the natural cycle of growth and decay, in which everything has beauty.” In what Fischer describes as a “gentle and sensual, almost devotional,” foil to the verdant natural landscape of the surrounding farm, La Granja’s interior walls are rendered in three different tones of gray. Though intended to evoke the calming atmosphere of a monastery, the darkest of these tones, Sendlinger admits, has proved to be a little too somber for some guests. 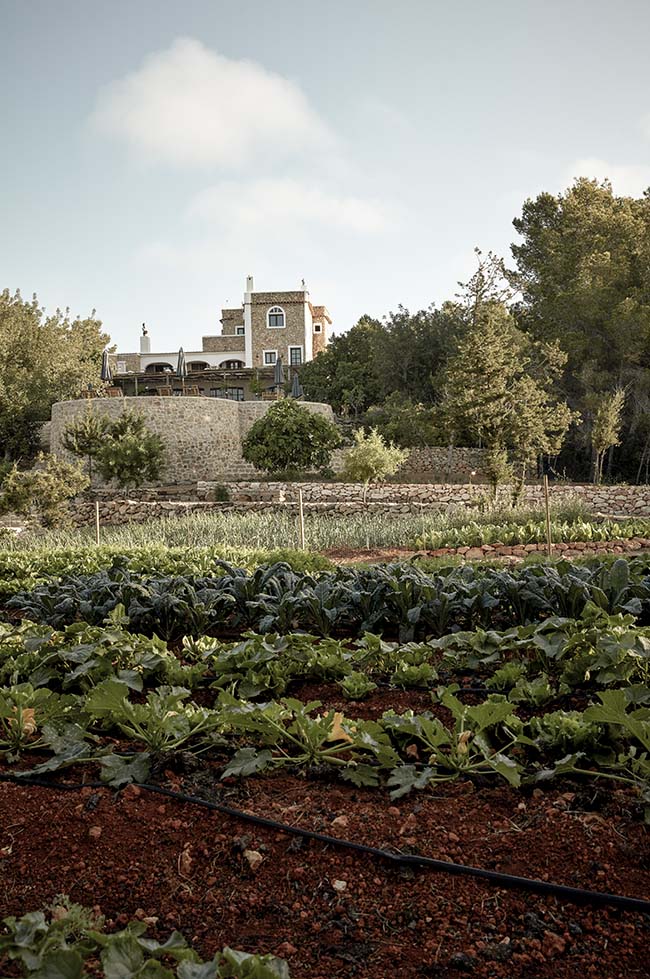 Crops at the farm at La Granja are planted according to moon cycles and nourished using probiotics. Farmer Andy Szymanowicz hopes to incorporate more biodynamic practices and will soon begin conducting farming workshops.

Equally central to La Granja’s concept is the farm itself, which is under the astute care of Andy Szymanowicz, who has spent the past 20 years organic farming throughout the United States. His experience in Northern California, where conditions are similar to the arid Mediterranean landscapes, proved especially pertinent, though he first needed to revive the centuries-old, long-dormant terraces by bringing in native soils from the island. The aging landscape was already home to olive trees and pine forest, as well as drought-friendly herbs like sage and rosemary. Szymanowicz has since introduced a menagerie of crops, including pomegranates, almonds, apples, peaches, plums, and figs. At present, one resident pig reigns supreme on the farm, but there are plans to welcome more livestock onto the grounds, including heritage breeds of chickens, blackface sheep, and black pigs native to the Balearic Islands.

While La Granja can be booked for one-off visits, locals and regular guests can pay a seasonal membership fee to the Friends of a Farmer organization, which gives them access to meals at La Granja’s communal tables and artisanal drinks at its tree bar. More importantly, and true to Sendlinger’s overarching vision, they are invited to attend the various programs and gatherings that frequently take
place at the retreat. So far these have included sound experiments and meditation workshops, as well as talks by the likes of the “chief social alchemist” of Burning Man, Bear Kittay, and a 92-year-old engineer and photovoltaic expert who drew up plans for a utopian village in the mountains of Ibiza in 1972. Sendlinger envisions that events in the months to come will explore myriad topics, from the future of travel, design, and architecture to poetry and art, along with daily performances by select musicians and DJs from around the world.

The underlying force behind all of this, Sendlinger says, is providing a space where people can connect with one another on an intellectual, creative, and human level. “When we ask what makes the biggest difference to people’s experience here, they often say it’s the fantastic, deep conversations they had with the other guests,” he says proudly. “That’s the best compliment we can get.” 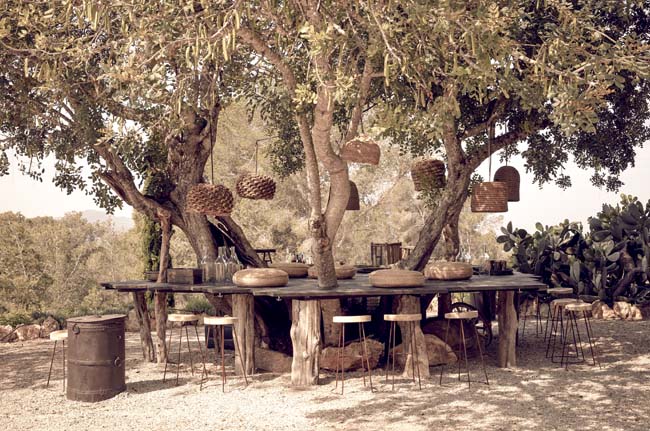 La Granja’s chef, José Catrimán, uses the farm’s bounty of fruits and vegetables to create his menu of healthy, fresh slow food, which he serves on communal tables. 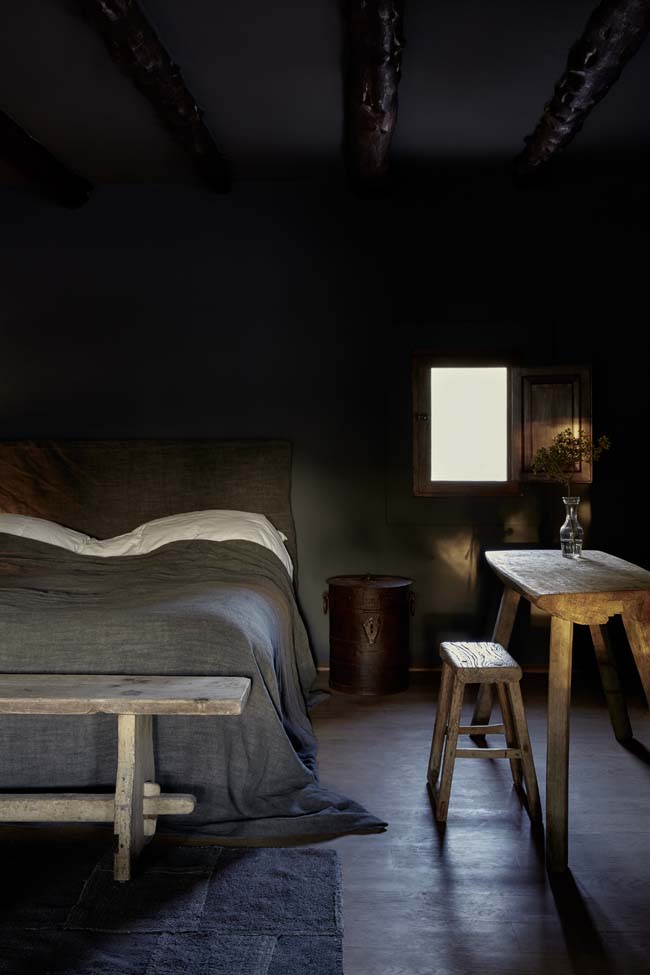 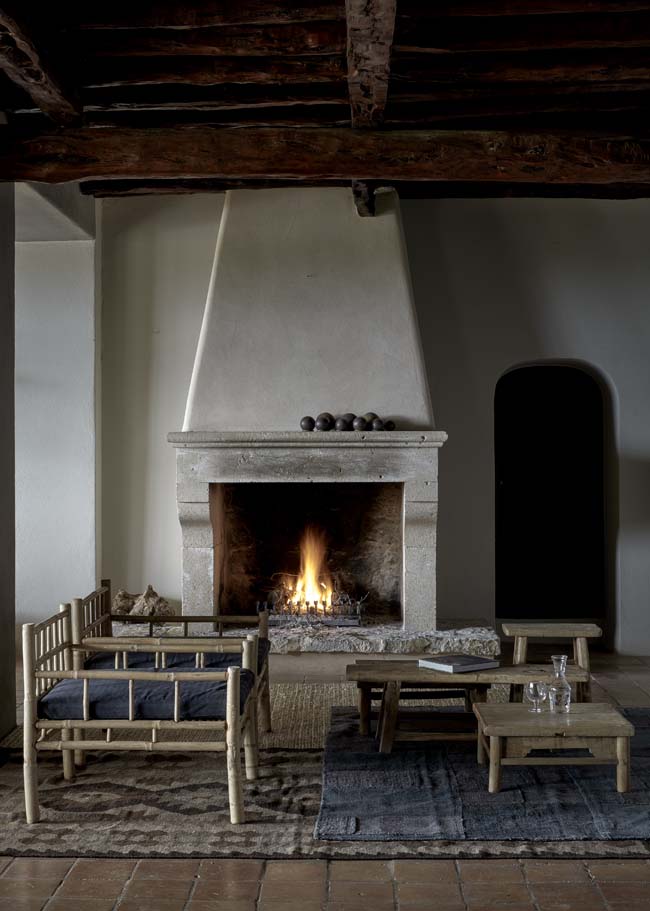