With the help of local craftspeople, Sharon Davis designs a rural retreat in the Hudson Valley that privileges nature. 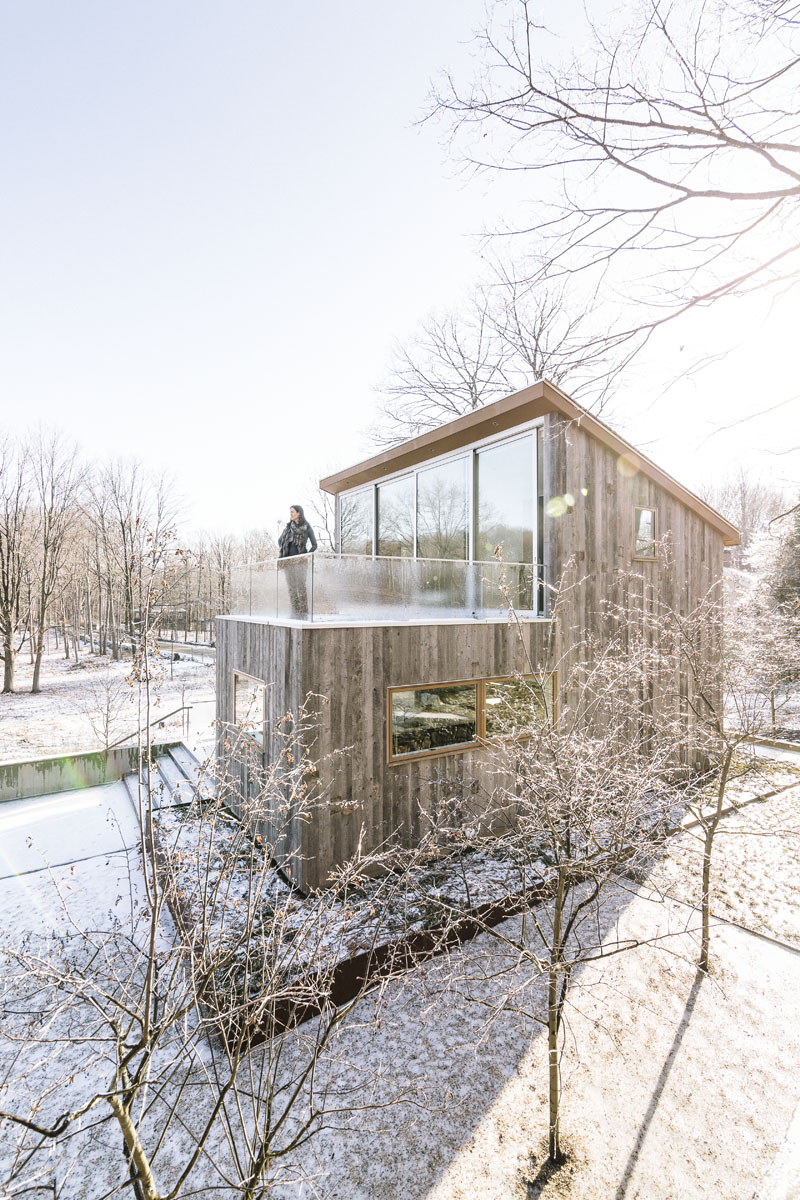 The banker-turned-designer and 2013 Metropolis Game Changer Sharon Davis, stands on the elevated deck of her second home, located in Garrison, New York. The house, which Davis designed, sits on land bordered by the historic Old Albany Post Road.

Puzzles are a favorite pastime of New York–based designer Sharon Davis. “I like to work on them with my younger daughter,” she says. “We always have one going when we’re together.” Work and recreation seamlessly merge in Davis’s sleek, elegantly compact vacation house in upstate New York, itself the result of a Tetris-style challenge she gave herself. “Was it possible, I thought, to build a 900-square-foot house that felt much bigger?”

For a devoted environmentalist—before going to Columbia University for her master’s in architecture and founding her design office in her early 40s, Davis served on the boards of environmental advocacy groups Riverkeeper and the National Resources Defense Council—the question was more than rhetorical. She and her former husband bought the Garrison property on which the new house sits with the intention of maintaining the open terrain and view for their home across the road. (The road itself is landmarked, being the erstwhile post road from New York to Albany.) For purposes of preservation, Davis kept to the extant square foundation of the house that was previously on the site, and the structure has an M.C. Escher–like intricacy. She extruded the foundations upward to create a retaining wall that cradles the new home—a one-and-a-half-story cubic volume crowned by a shed roof that references the traditional architecture of the barn a few yards away. Davis then carved away at this volume, dividing it into quadrants in a push-pull fashion. The vestigial northeast quadrant of the ground floor is recovered as an elevated deck, lifted directly above the kitchen. 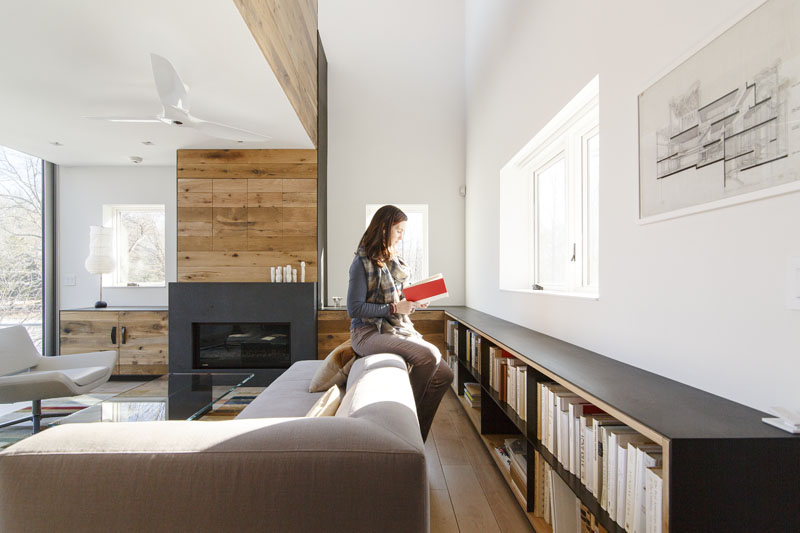 Davis used reclaimed wood for the storage systems and the base of the fireplace, which adds a vertical visual element to the interiors. Jeff Wandersman, who works in Davis’s office, designed all of the custom furniture.

Inside, different textures weave together seamlessly, connecting the first and second floors, as the glorious landscape of the Hudson River Valley becomes an essential part of the interior. “I’m crazy about light; it impacts the way I feel,”Davis says, explaining the primacy of the irradiated view. She minimized clutter in order to maximize the panorama, cleverly integrating built-ins and hiding cabinets in unexpected—but still easily accessible—locations. Overall, the house combines the efficiency of a sailboat with the feel of a vast, open modern space.

This is largely due to the home’s signature element, the floor-to-ceiling insulated windows and sliding doors that effortlessly bring the outside in. When opened on the second floor, they lead to the lofted deck, and expose the bathroom to fresh air and warm breezes. “I love outdoor showers,” Davis explains, “so I found a way to use the openings to bring nature in.” On the first floor, the sliding doors meet at the corner of the kitchen and living areas. 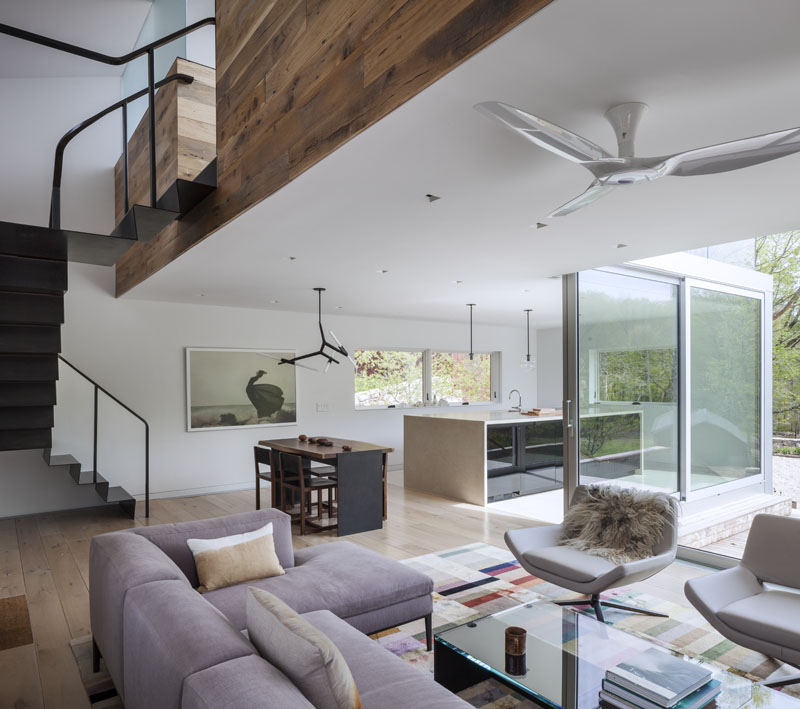 The living room is framed by floor-to-ceiling sliding doors that to meet at the corners. They create a thin border between interior and exterior that virtually dissolves when the doors are opened. Interior designer Katherine Hammond styled the room, pairing Metropolitan chairs and a Michel sectional sofa by B&B Italia with custom dining and coffee tables.

To accommodate this unusual scenario, Davis asked Shuco, the manufacturer, to make the frame as narrow as possible so it would resemble a curtain wall, yielding less than a half of an inch range of tolerance. Opening the doors makes the house in Davis’s words, “complete,” since the deck becomes one with the interiors—thus completing the square of the floor plan. From there, they expand onto the outdoor terrace, which frames a fire pit and a mulberry tree that, when in bloom, sports bright blue berries and crimson leaves. Davis turned to landscape designer Thomas Woltz for help with planting the two-plus acres. Woltz used stone found onsite to make an old-fashioned wall that runs along the length of the back of the property and, as it travels toward the house, becomes more formal and sculpted, enfolding the deck. 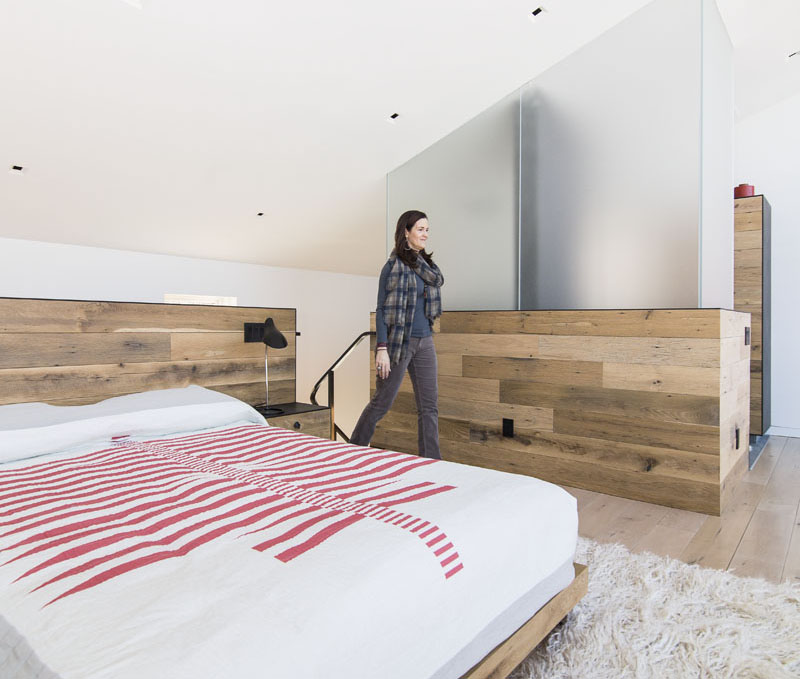 Hammond selected the Megan Callahan Spine Quilt for the bedroom from Matter, and the Leda desk lamp from David Weeks, both pictured. The upstairs bathroom is encased in frosted glass partitions sourced from Glassolutions.

Such subtle gestures abound—the ample kitchen counter, made from cast concrete, hides all of the appliances and drawers, leaving the surface flush and clean. (Davis opted for an electric stovetop over gas, which she generally prefers, in order to keep the surface flat.) She deliberately left the walls bare, giving them over to fenestration, notably a picture window at the rear of the kitchen that frames the beautiful view. Interplay among textures such as the concrete counter, a black steel staircase with a rippling handrail (that appears to float in space, designed by Brooklyn-based company Official LLC), and a surprisingly luxurious material called Richlite made from recycled paper gives the interiors a sensual and relaxed atmosphere. Davis even considered the weighty heft of the front door, so it is pleasingly heavy to push open and close.

Most of the materials, including the windows, were sourced locally, and Davis also hired a contractor who lives in the area. But her generous and proactive sensibility comes across most fully in her efforts to preserve and celebrate the natural landscape. Despite the house’s diminutive dimensions, it is hard to imagine it being improved on by being expanded. When asked about her favorite spot in the house, Davis responds, “The bedroom—I love waking up to the view.”