Designing Urban Landscapes: A Matter of Good Storytelling and Editing

A rendering of a reimagined Soho Square. The design draws inspiration from its surroundings with a bold, linear paving pattern and sturdy stainless steel furnishings.

Our last post discussed the designing for winter landscapes, the most barren time of year. This post considers another angle—incorporating history to create a sense of place.

One of the challenges in designing urban landscapes is developing a narrative that feels authentic to what is often a layered and scattered history. On an urban site that has evolved over time, what do we really mean when we talk about creating a sense of place? In a city like New York, which is building out and up as furiously as possible, public open space can fill the shape of anything from a historic shipping pier to a once traffic-packed intersection, and even drape itself over a former landfill of epic proportions. Without overt historical references or cultural artifacts in situ, creating “place” can sometimes be much less about divining the spirit of a site than judicious storytelling and editing.

Bogardus Plaza, located along West Broadway in Tribeca, is named after James Bogardus, an inventor and builder credited with pioneering prefabricated cast-iron construction. The plaza has seen a number of transitions in use over the years. In the 1800s, it formed a civic space lined with cobblestones and wholesale markets. A transportation hub that serviced an elevated subway line rose up on the site by the early twentieth century, just as the city expanded its infrastructural network. By the 1970s, however, the plaza was relegated to a traffic island. Now, in a delicious twist of fate, it has been rehabilitated for public use as a fenced garden and a temporary DOT plaza. 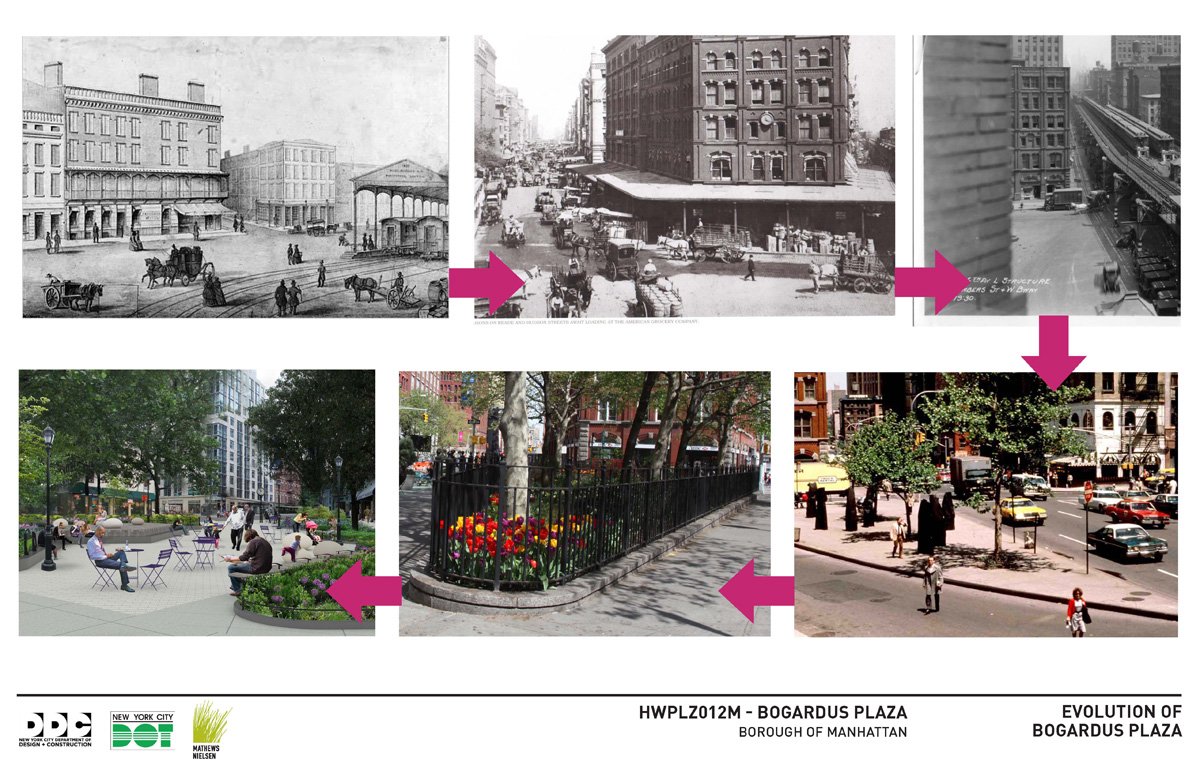 A slide from Mathews Nielsen’s public presentation of the Bogardus Plaza redesign details the evolution of the space from the 1800s to present day.

The latest iteration of the plaza creates various zones of engagement for neighborhood use, including moveable and fixed seating, an elevated platform, and of course, giant concrete “eggs.” But, why eggs?

Sculptural in form and functional as informal seating, the eggs were chosen from a large pool of possible historical references. They harken back to site’s most antiquated identity, when it was full of food wholesalers and was consequently dubbed the “butter and egg” district. Additional proposed design elements bring in other aspects of history to the site. For example, new steel fencing will echo the columns of the elevated train that once ran through it—a solution that trumped several fencing options, including one that took inspiration from Bogardus’s cast-iron architecture. 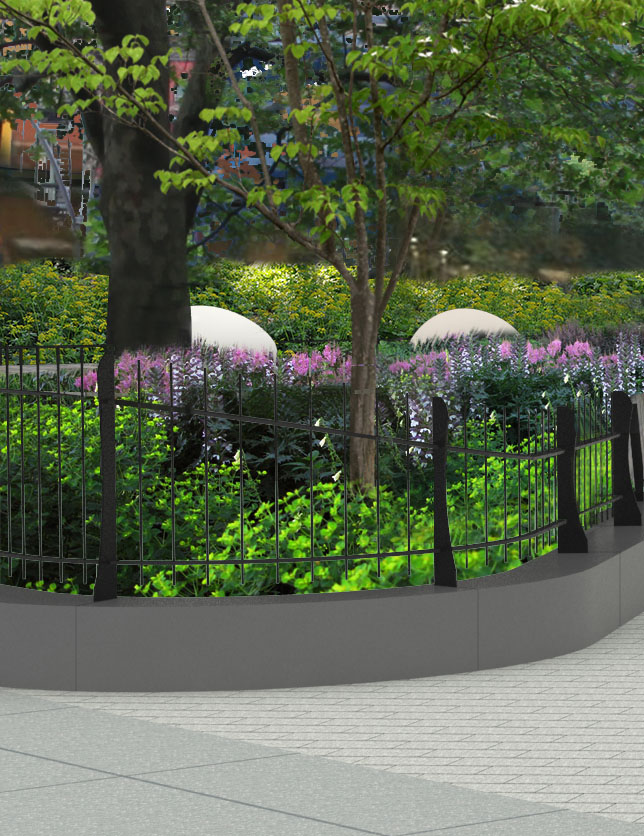 The proposed steel fencing at Bogardus Plaza references the elevated train that once ran through the site, while the concrete eggs beyond hint at another previous activity in the neighborhood.

Moving slightly uptown, Soho Square stands at the intersection of the Hudson Square and SoHo neighborhoods in downtown Manhattan, running along Sixth Avenue. (See top image.) The neighborhood has a rich history as an industrial district, from steel and glass manufacturing in the early 1900s to printers and publishers who moved in a few decades later. The old Butterick factory, built in 1903, stands at the corner of the site. The company made its name in sewing patterns and was once the largest publishing plant in the United States outside of the official government printing office. The plaza’s centerpiece, a monument to Uruguyan independence leader General José Artigas, adds another, more contemporary chapter to the park’s history. Installed in 1997, the effigy is one of five devoted to historical Latin American leaders that honor Pan-American ideals along Sixth Avenue, or the “Avenue of the Americas.” 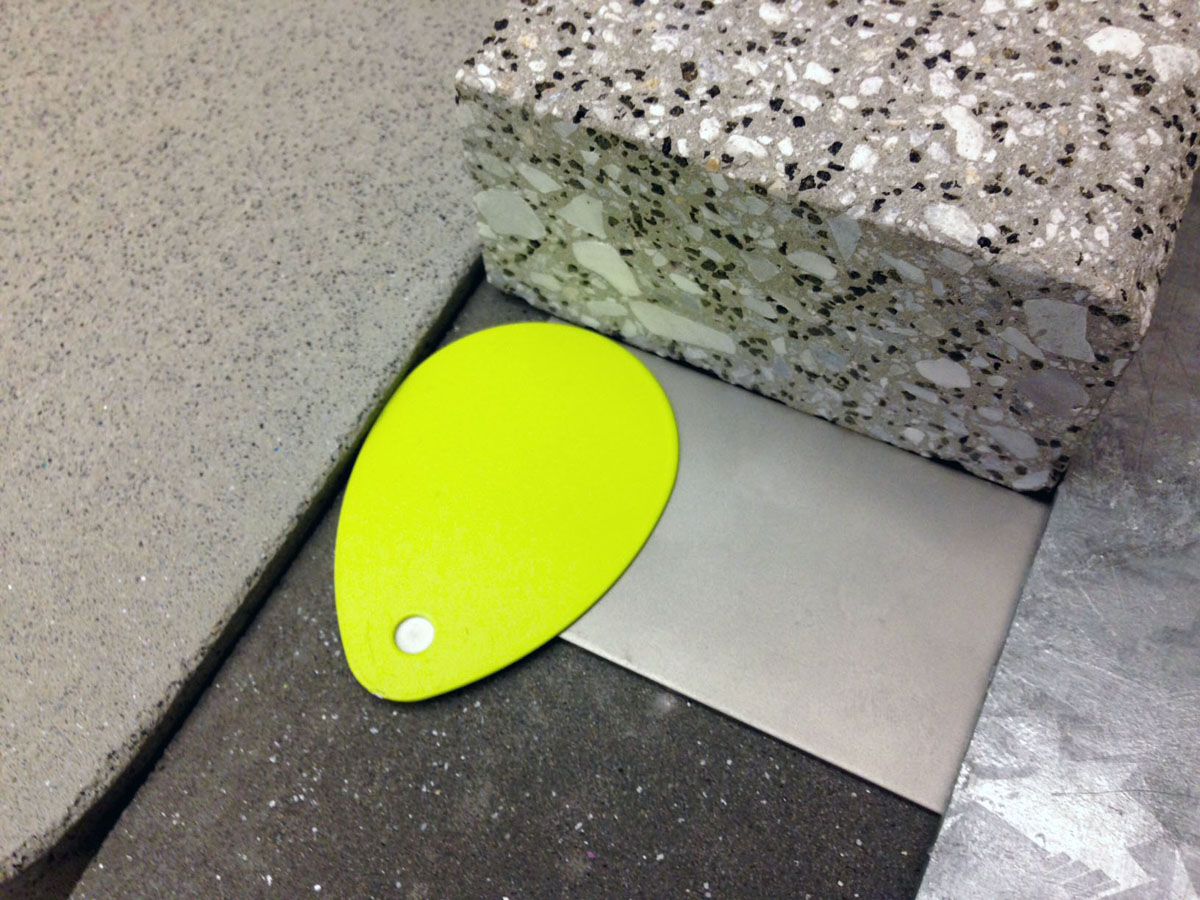 Among the various contenders for thematic inspiration, the design team at Mathews Nielsen Landscape Architects chose to articulate Soho Square’s printing past in its design to strengthen existing program needs. The linear graphic pattern in the paving emphasizes the area’s unusual orientation in the city grid while also creating visual interest within a budget-conscious paving palette. The materiality of industrial printing presses and the area’s manufacturing past inspired the design’s robust palette, expressed in the durable galvanized and stainless steel finishes of the site furnishings and the concrete paving.

Referencing history in landscape details goes hand in hand with function and form in telling a good design story. In a city that is constantly building and rebuilding on top of itself, the streetscapes we are tasked to design have likely lived lives worthy of several gossip columns. We examine these checkered pasts, catalog current needs, and try to extrude something that inspires or shapes future needs and uses. Pulling out the threads that tie together past, present, and future requires firm editing, inspiration, and a believable, though not necessarily comprehensive, story.

Grace Lo, RLA, ASLA, LEED AP is a full-time practicing landscape architect at Mathews Nielsen Landscape Architects, as well as a part-time yoga teacher and an aspiring plant nerd. A born-and-bred New Yorker, she has nine years of experience working on public, commercial, and residential projects throughout the area, and has a passion for involvement in urban revitalization in all shapes and forms. She received her BSLA from Cornell University.

This is one in a series of Metropolis blog posts written by members of Mathews Nielsen Landscape Architects’ Green Team, which focuses on research as the groundswell of effective landscape design and implementation. Addressing the design challenges the Green Team encounters and how it resolves them, the series shares the team’s research in response to project constraints and questions that emerge, revealing their solutions. Along the way, the team also shares its knowledge about plants, geography, stormwater, sustainability, materials, and more.