The A. Alfred Taubman Center for Design Education is among the country’s foremost creative hubs.

The exhibition “Detroit Made,” organized by Detroit Creative Corridor Center at the College for Creative Studies (CCS)

The first thing a friend asked when I told him I had just returned from Detroit was if it was as sad as people say it is. After spending a few days there for the Detroit Design Festival last month, things in the Motor City seem to be rolling full steam ahead. Of course, there are challenges—no city can go through a crisis like that unscathed. But a crisis is also an opportunity, and that thought has not been lost in Detroit’s passionate creative community.

The A. Alfred Taubman Center for Design Education, née the Argonaut Building, is at the heart of this resilient energy. Built in 1928, the 760,000-square-foot building was designed by Albert Kahn for General Motors as a research and engineering plant. Later, it housed the first automotive design studio under Harley Earl. With innovation part of its DNA, this landmark building now houses three organizations that are playing a vital role in Detroit’s renewal. 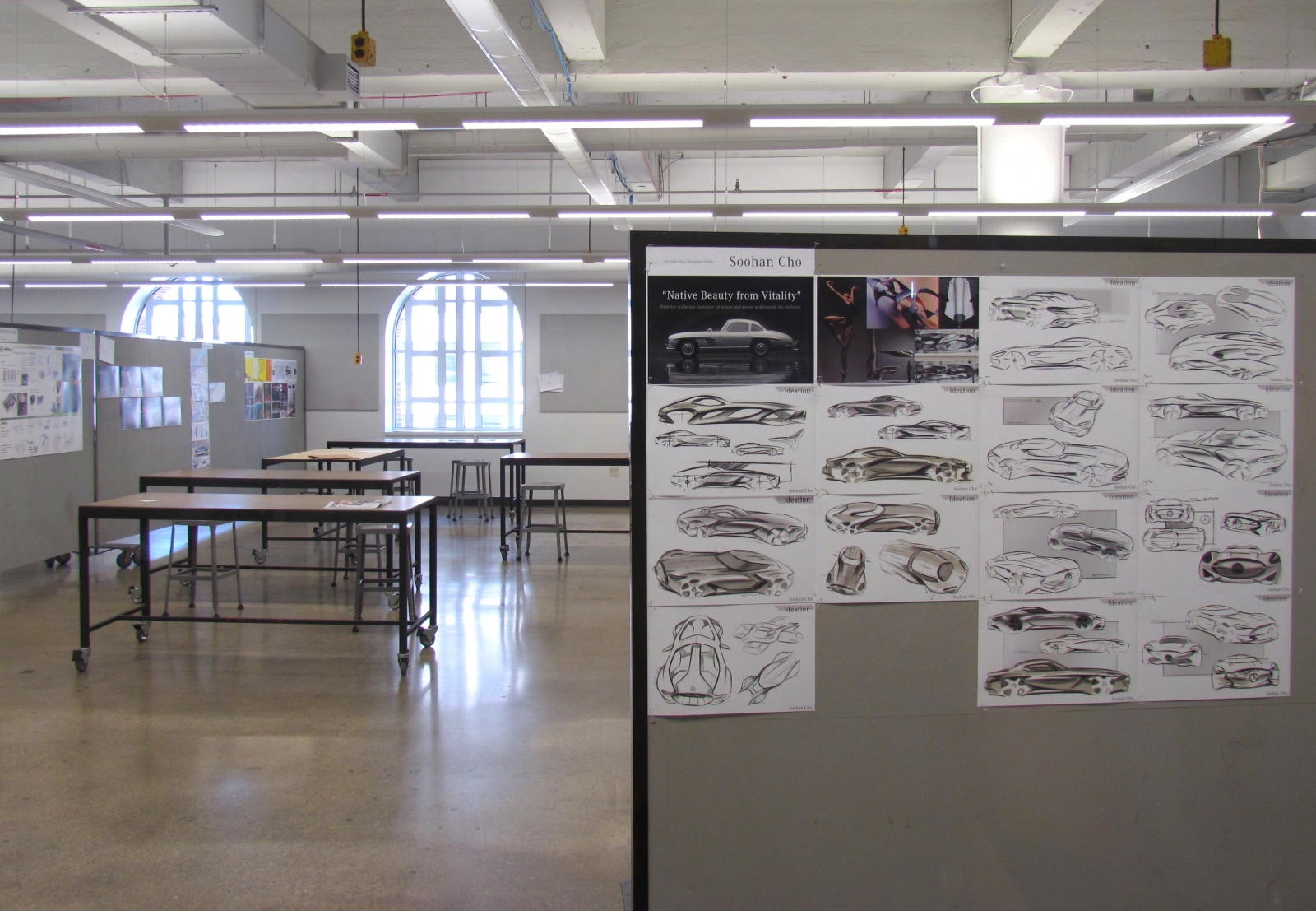 A classroom and studio at the CCS

Beginning on the ground floor, there’s the Detroit Creative Corridor Center, or DC3, an economic development partnership between Business Leaders for Michigan and the College for Creative Studies (CCS). Their mission is to offer support to the city’s creative community. Matthew Clayson, the organization’s executive director, explains how the concept was born: “DC3 was launched as part of a larger strategy to transform SE Michigan’s economy, called ’Road to Renaissance.’ Business Leaders for Michigan initiated and authored this strategy in 2008. And we started operating DC3  in 2010.” Responsible for organizing the Detroit Design Festival, DC3 is also behind many other design initiatives in the city, having consulted on many projects involving local designers and architects. “We seek to advance Detroit’s reputation as a global center of design, creativity and innovation,” Clayson says. “We accomplish this through supporting small-to-mid-sized design and creative practices, connecting them to new business opportunities and markets, and through programming that shares the work of Detroit-based designers and creative practitioners with regional, national, and international audiences.”

Moving up the building, the CCS has set up its secondary campus, devoted to graphic, interior, and product design. Given the building’s history as an erstwhile epicenter for innovation, the setting is very conducive to this study, with classroom set-ups offering an experience as close as possible to the real working world outside. The many programs that are offered connecting students with local manufacturer’s has made sure that the CCS has remained relevant among the top-ranking design schools in the country. 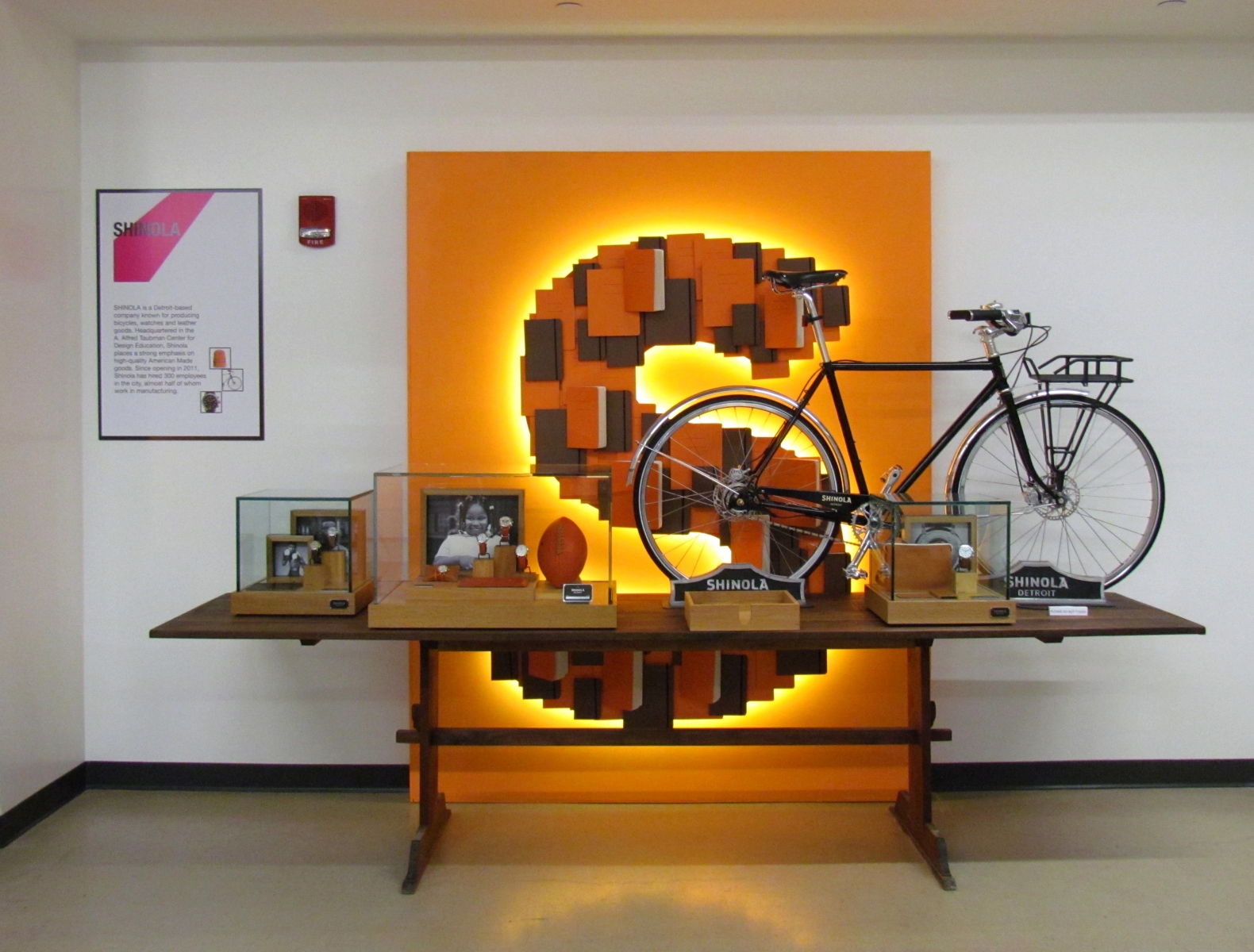 On the 5th floor is Shinola, whose story is not only important to Detroit but an example for the rest of the country as well. What started almost as joke—“You don’t know shit from Shinola”—became a full-fledged company determined to make made-in-the-USA products both prominent and financially viable. With both its industrious history and regenerative potential, Detroit was an obvious choice, fitting perfectly with the company’s vision of manufacturing and marketing. 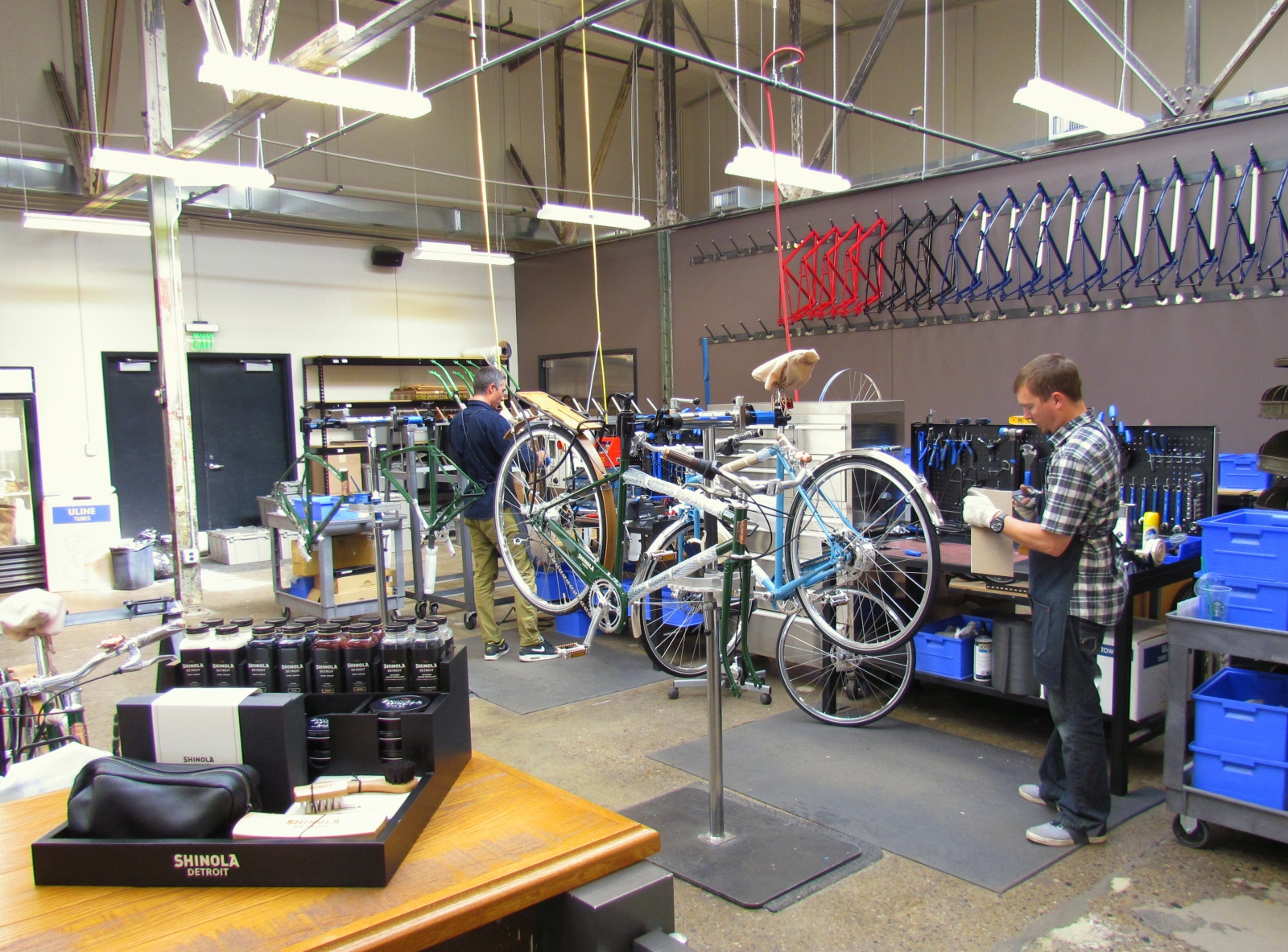 The bet paid off and today Shinola has acquired a cult following among design aficionados. Its famous Detroit-made watches—marking the first time watches were produced in this country at that scale since the 1960s—have become much sought-after items. The company, which also manufactures bicycles and leather goods, is hard at work expanding its catalog. And nearly all are manufactured right there on the 5th floor, with only a thin glass wall separating watch assembly from corporate and design offices. 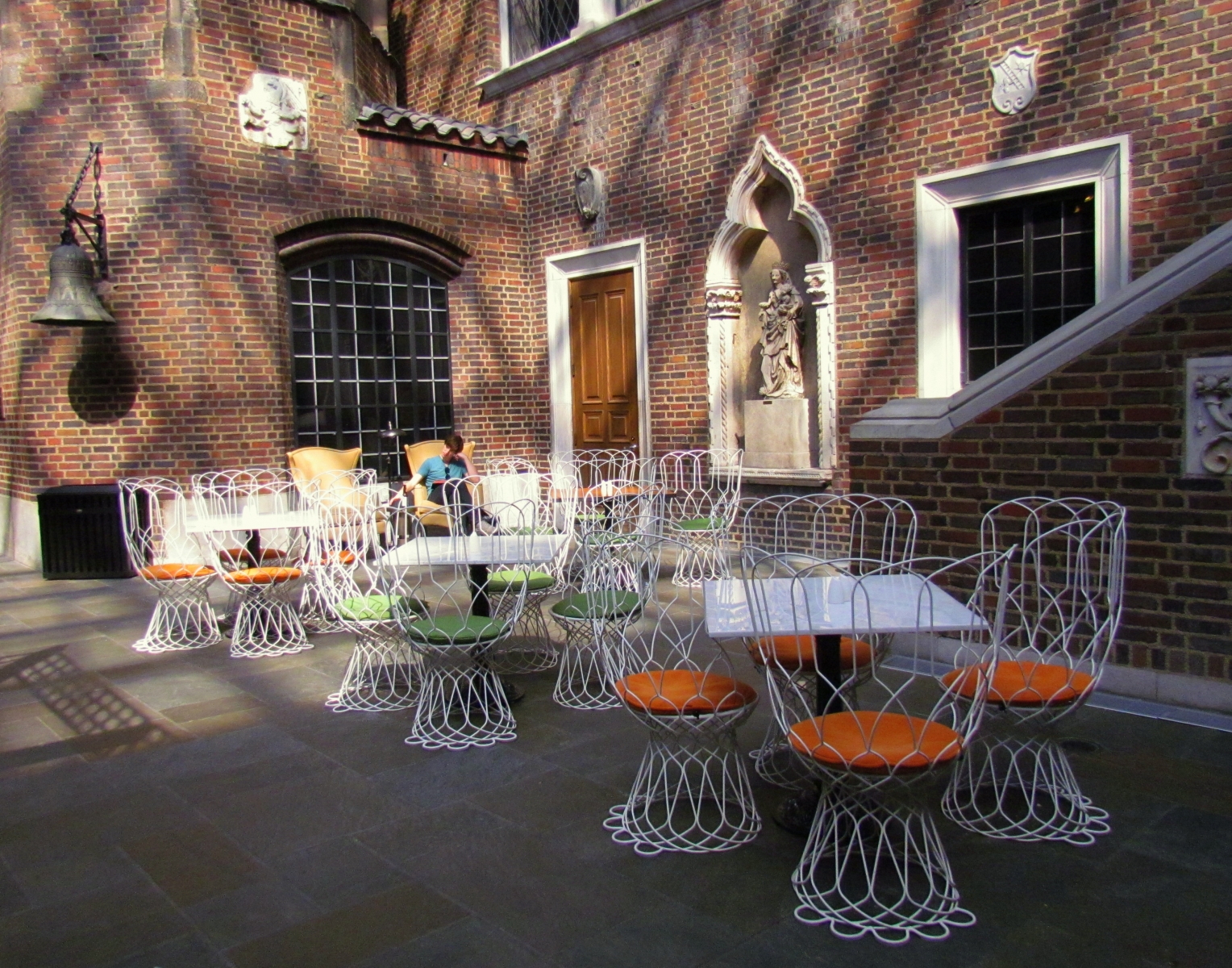 The redesigned Kresge Court at the Detroit Institute of Arts (DIA)

There are many other developments in the city that show that Detroit is dealing with its challenges by utilizing its own resources. The recent redesign of Kresge Court at the Detroit Institute of Arts (DIA) is another excellent example. Amid the museum’s fight to stay afloat , the DIA managed to engage local firm Patrick Thompson Design, and fundraise (Detroit’s community-focused Kresge Foundation being a major donor) to transform the courtyard into a new public space, adding a welcoming feature to the museum.

“Detroit needs density and connectivity”, says Clayson. “Currently, there are pockets of activity throughout the city, but they remain loosely connected. For Detroit to realize its full potential, these pockets and the communities in each need to be connected. Density can lead to connectivity.”

That density is slowly forming. There are still a lot of empty buildings downtown, but many new projects are going up, such as a new boutique hotel designed by local talent Mcintosh Poris Associates scheduled to break ground soon.There’s also the new 20,000-seat hockey arena for the Red Wings, part of a massive $650 million 50-block complex project featuring entertainment, residential, office, and retail space, which will no doubt aid the city’s economy and help to fill the gap between downtown and midtown areas. 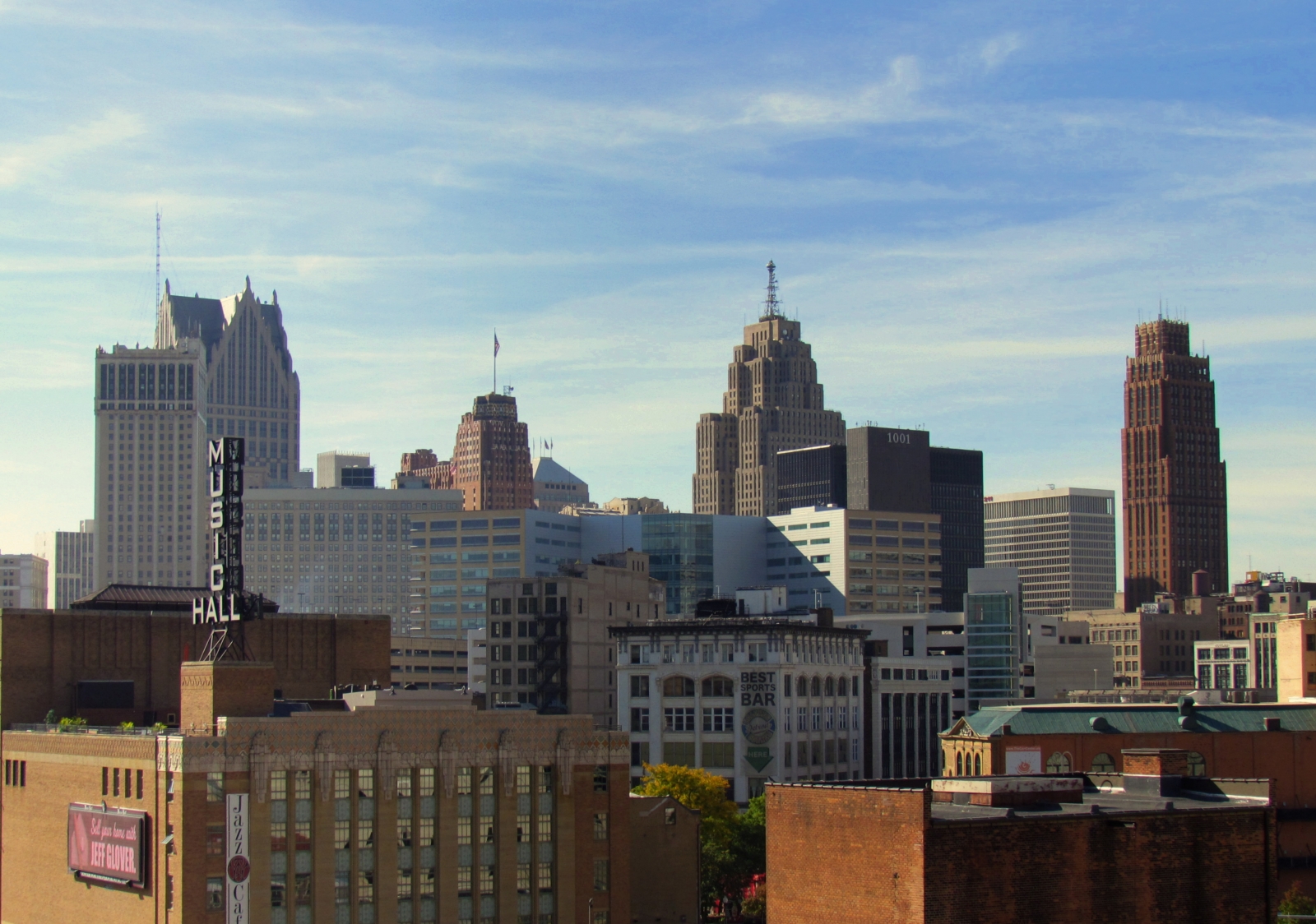 Scott Weir, a principal at Toronto-based ERA Architects Inc., grew up just across the river, in Windsor, and has closely followed Detroit’s history. Of the city’s current moment, Weir notes how since the 1840s Detroit native have been making useful things that manage to be beautiful as well. “This is still present,” he says. “I think what you are now seeing is a return from a focus on manufacturing to reinventing the process of making and problem solving for post-industrial America.”

It’s been said that Detroit challenges are a poignant reflection  of  the urban and economic changes that has happened not just within its city limits but in the country at large these last decades. Maybe then the ways the city is facing and overcoming these challenges could also lead the way in a broader, far-reaching scale.

Paul Clemence is an artist, architect, author, and award-winning photographer inspired by the cross sections of design, art and architecture. His work is part of many collections, including the Vasari Project /Miami , Escola de Belas Artes/Sao Paulo, and The Mies van der Rohe Archives housed by MoMA, New York.  His “Mies van der Rohe’s Farnsworth House book,” is to date, the most comprehensive photographic documentation of that iconic modern house. Besides curating Facebook’s photography page ARCHI-PHOTO, with over 400k daily followers, his photography appears regularly  in major publications like  Departures, ArchDaily, World of Architecture News, Metropolis,  Aishti, and  Casa Vogue / Brazil. American born, but raised and educated in Rio de Janeiro, Brazil, Clemence currently is based in Brooklyn, New York.