Don’t Call It A Commune: Inside Berlin’s Radical Cohousing Project

The architect-led, collectively funded R50 Baugruppen project in Berlin is a new model for housing. 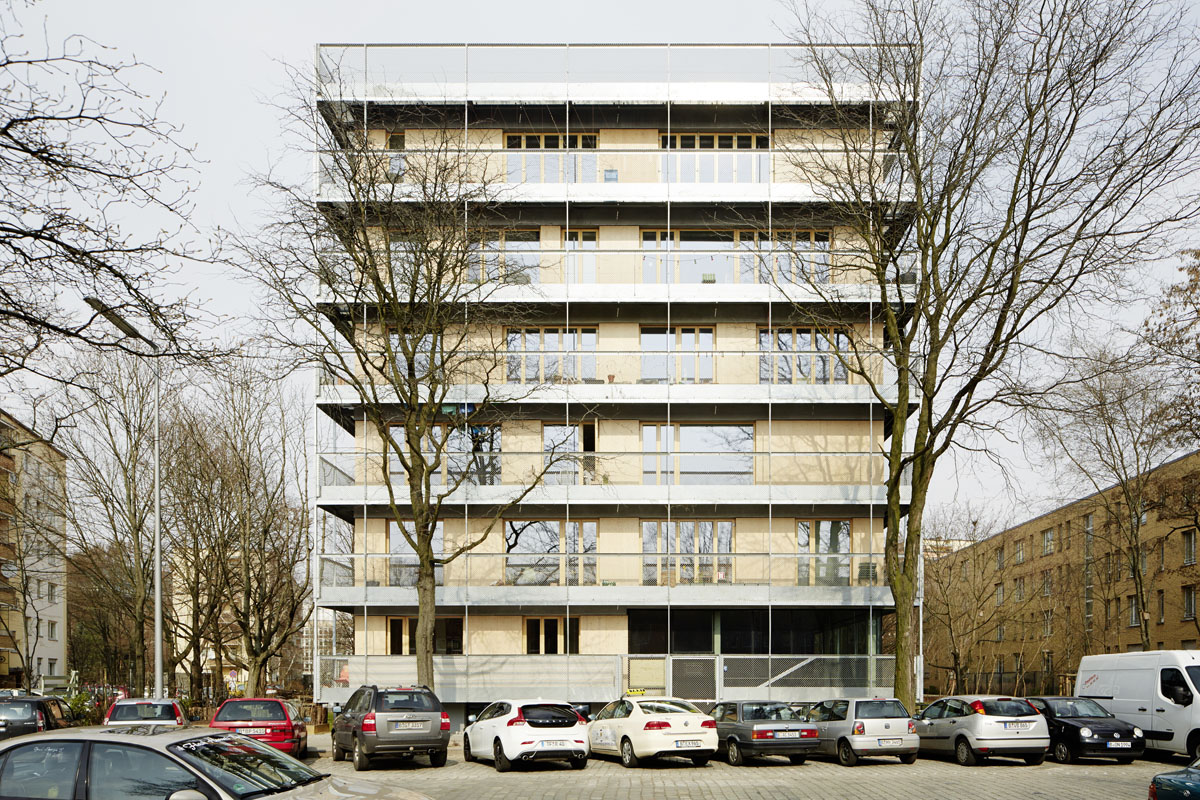 The R50 Baugruppen cohousing project in Berlin was designed to respond to complex issues in the city’s housing market and to demonstrate how people can act as developers of their own homes.

In recent years, there has been much discussion about the expanding role of architects in the making of cities. While this has often skewed idealistic—who really wants an untrained transportation planner designing aesthetically pleasing but semi-functional subway lines?—in certain cases, architects have led the vanguard of alternatives to development-as-usual. This is very clear in Germany, where new models for housing have emerged, ones that take ideas about communal living out of the realm of hippie collectives or alt-squats and into the pragmatic territory of pooled finances and homeownership.

The Baugruppen—German for “building groups”—is one model for constructing housing in this future of architect-led, collectively funded community-based living. Berlin has become a prime site for alternative everything, and the R50 Baugruppen project embodies a fantastic wish for cohousing to ease some of the problems of the housing market.

Named for its location at Ritterstrasse 50 in Berlin’s Kreuzberg neighborhood, R50 stands seven stories, surrounded by green and blocks of typical social housing. Nineteen households built the building together, the modern way: Funds were pooled for construction and the purchase of the plot, and participatory planning catalyzed a comprehensive vision, from communal space to window fittings. The group and its architects, a collaboration between ifau with Jesko Fezer and Heide & von Beckerath, selected the site from a set offered by the Berlin Senate Department for Urban Development—part of a city government bid to spark development outside the usual mode of initial investment for maximal short-term profit.

The developer-driven side of things has left a bad taste in the mouths of many, as the center of Berlin faces a crisis of affordable housing, similar to the situation in Munich or Hamburg. Along with rising rents, there’s evidence of a high-end condo rush, with properties like Fellini Residences or one2one driven by local and global developers, snapped up by eager empty nesters and suave speculators alike. Even with these new buildings, the business institute IW Köln estimates an overall deficit of 10,000 housing units in Berlin year to year until 2030. A remarkably low 43 percent of the housing in Germany is owner occupied, as estimated in the most recent national census in 2011. Rents have increased just as the country’s storied tenants’ rights have slipped in the face of asset leverage through property-based profit. Where unlimited leases with difficult-to-raise rents were once the norm, now there is national political discussion of mietpreisbremse, a brake on rental prices. The shortage of housing stock in Germany’s urban centers, lack of newly constructed public housing, and the sale of existing public housing to private controllers have all heightened anxieties. The time for alternatives is now. 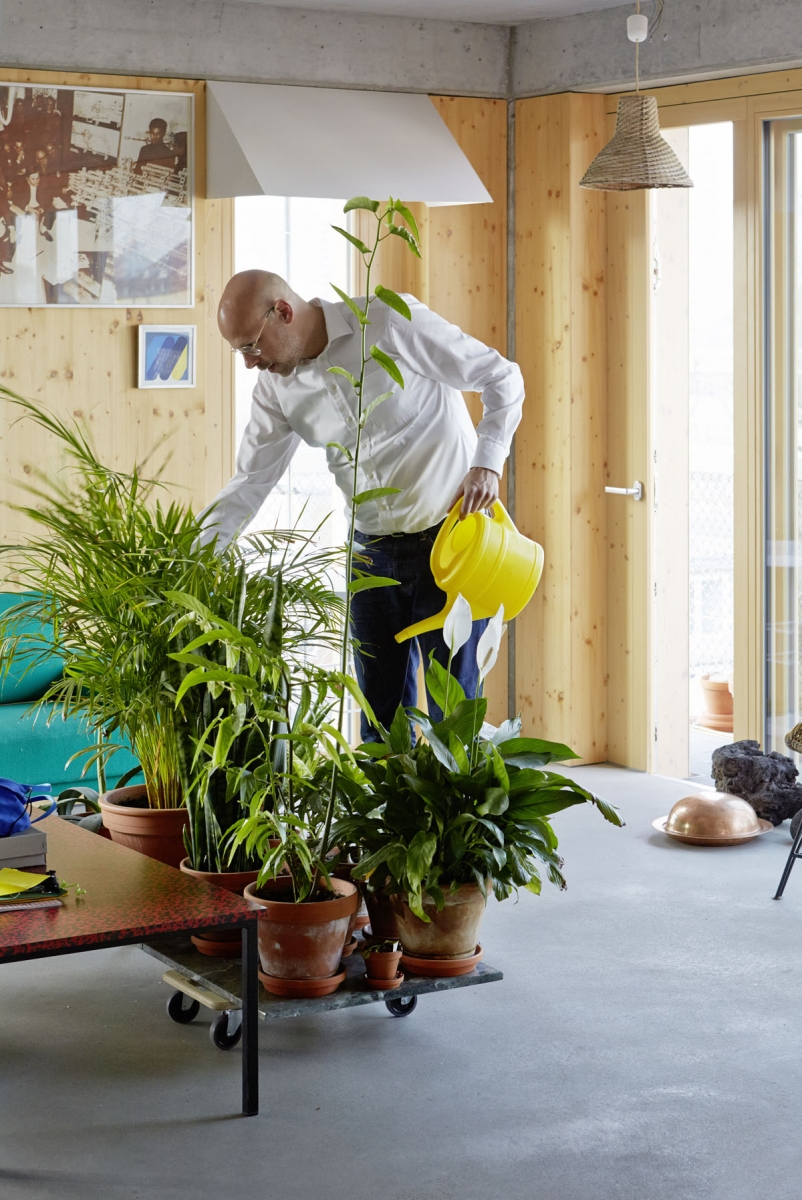 An R50 resident and one of the building’s architects, Jesko Fezer waters the plants in his apartment, which he shares with his partner, Stephanie Wurster, and their two children.

The Baugruppen is “a solution for the moment, when the city is not acting as it should,” says R50 resident and artist Florian Zeyfang. For R50, the architects gathered potential residents from their networks, including friends, acquaintances, and collaborators. The group assembled includes architects, artists, and journalists—professions that don’t net the typical buyers or builders of new homes. They all essentially bought into the project, with everyone purchasing his or her unit in the building on spec before it had even been developed. The bank and project manager structured a package of financing by pooling the individual mortgages for the units of future residents that would fund all the phases of construction. This unusual method of financing was made possible by specialized programs offered by Nürnberg’s UmweltBank, the self-styled “greenest” bank in the economic ecology of Europe’s financial leader. The invisible hands of the market can strum a sitar, if need be.

Yet the thing that elevates R50 beyond just a clever financing model is that it was designed with the intensive participation of its residents. The architects facilitated the process, starting with the founding of the building group, leading participatory planning and design meetings. “We knew why these people, why this building,” explains architect Verena von Beckerath, who, along with the project team, prepared diagrams to reproduce the results of the meetings and quantify individual spatial needs and input into the shared spaces. The collaborative method was also logical, as each unit’s mortgage had to also carry a share of any collective areas. Per square meter, the apartments in R50 cost €2150 ($2450), and, with public space costs factored in, €2350 ($2678). The median purchase price for simply buying an apartment in Kreuzberg was €2950/square meter in 2013, according to data from commercial real estate company CBRE. R50 is a comparative bargain.

While the more communal aspects of R50 might smack of 1970s California communes, its rational, financial, and functional planning places it firmly in another, less idealistic category.
The apartments are divvied up in size by investment and in structure by the preferences of each resident with an agreed basic standard for all building elements. While private developers offer an appealing facsimile of bespoke choice—12 bathroom tile colors! Wood or marble countertops?—R50 began from desire and negotiation. The modest price meant that the units were delivered finished, but not entirely “done,” says resident Jesko Fezer, who was also a member of the team of architects who led R50’s construction. “A project is not finished when the architects leave—typically, they start and finish in a certain period in the life of a building.” In the case of R50, this was a self-conscious decision to leave things flexible for adaptation, especially evident in Fezer’s own unit.

The architects developed a concrete shell structure with modular wooden elements and a wire mesh facade to accommodate the variations of internal layout the studies called for. The residents opted to make the ground floor a shared space—sensible given restrictions on locating apartments in the neighborhood—that includes a double-height community room and laundry facility. A rooftop “summer kitchen” and deck is an outdoor gathering space for Berlin’s northern European late-light nights, and wraparound balconies are a shared outdoor space and secondary exterior circulation route between apartments. Popping over to a neighbor’s for a coffee, stepping around terra– cotta flowerpots and scattered toys, becomes more intimate than crossing a hallway, as you pass your neighbor’s bedroom windows. 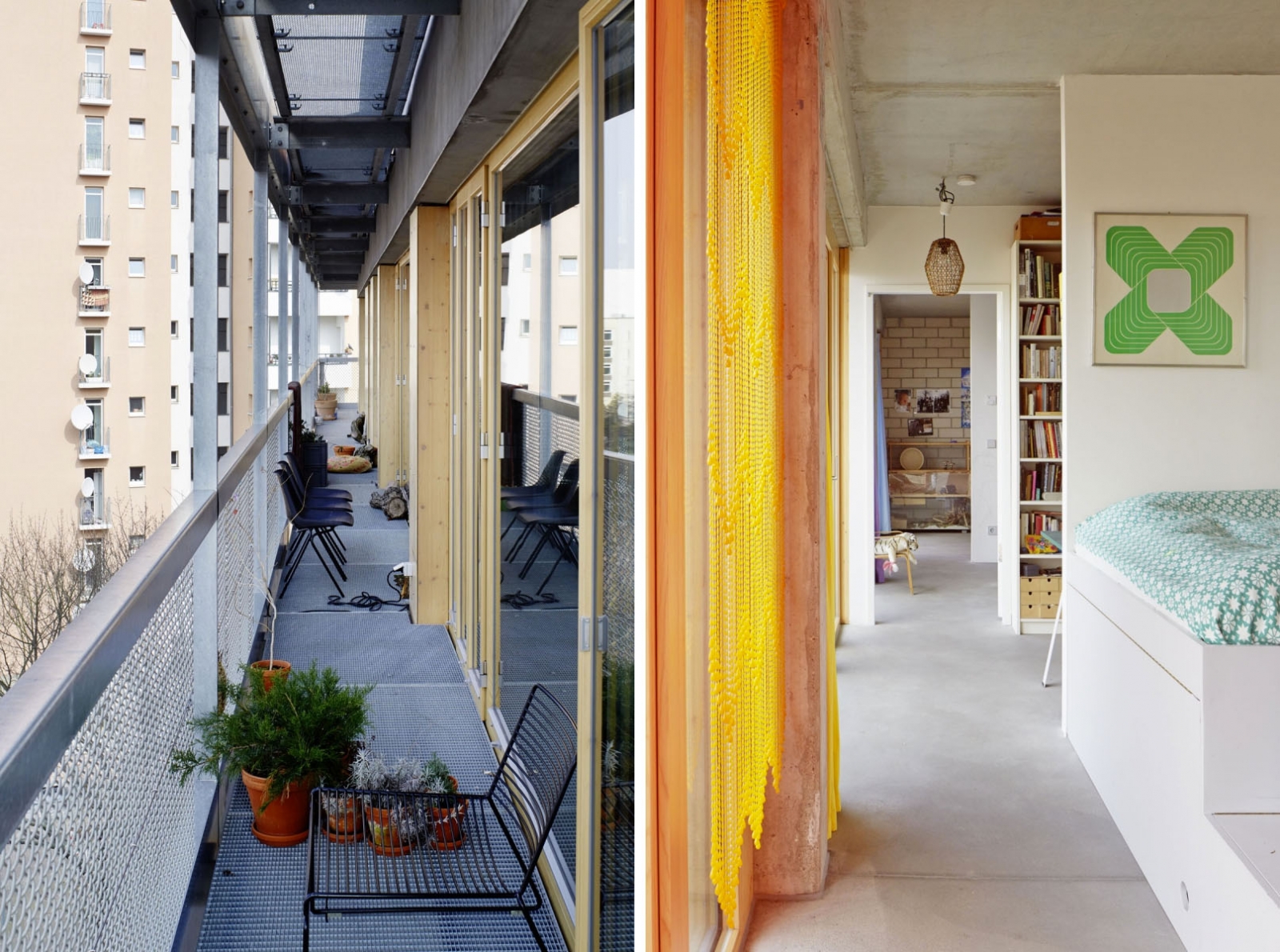 Left: A folding, multiple section wall—not uncommon in Germany—allows the unit to be opened to the outside, permitting fresh air and access to the balconies that wrap the entire building without separation between units. The balconies are made from galvanized steel panels, harmonizing with the mesh on the balcony rail, which is used as a standard fencing material in Germany, sold in rolls. Right: Wurster and Fezer’s bedroom, pictured in the foreground, is triangular and can be opened up to the house or closed off. The children’s bedrooms and a workroom line the shared corridor along the facade.

Yet this idyll is exactly the most fragile point of the Baugruppen. The communal aspect hangs perpetually in the balance with individual ownership. While the original residents might uphold the underlying tenets of the groupthink project, the question of selling—and selling out—comes up. Under German law, owners of units in the R50 building and other similar cohousing complexes can sell to whom they please. This, naturally, leads to some anxiety on the part of the community of owners, which only time will put to rest or realize in new, nasty neighbors. The architect-led revolution to-be in housing is not perfect, though, at the very least, it certainly promises something different. Most importantly, it scales beyond a boutique project—ifau and Heide & von Beckerath are currently developing a mixed-use Berlin Baugruppen complex with nearly 100 units.

As that project demonstrates, the Baugruppen model represents an innovative strategy for constructing new housing. Baugenossenschaft (co-ops) and Baugemeinschaft, a form of cohousing led by an independent consultant-as-developer, often with an architectural background, have emerged as viable options as more Germans look to become homeowners. While the structural dimensions of the housing market are beyond the control of any building group, the fact remains that the growth of different ways of making buildings beyond typical public or private development is increasingly popular. 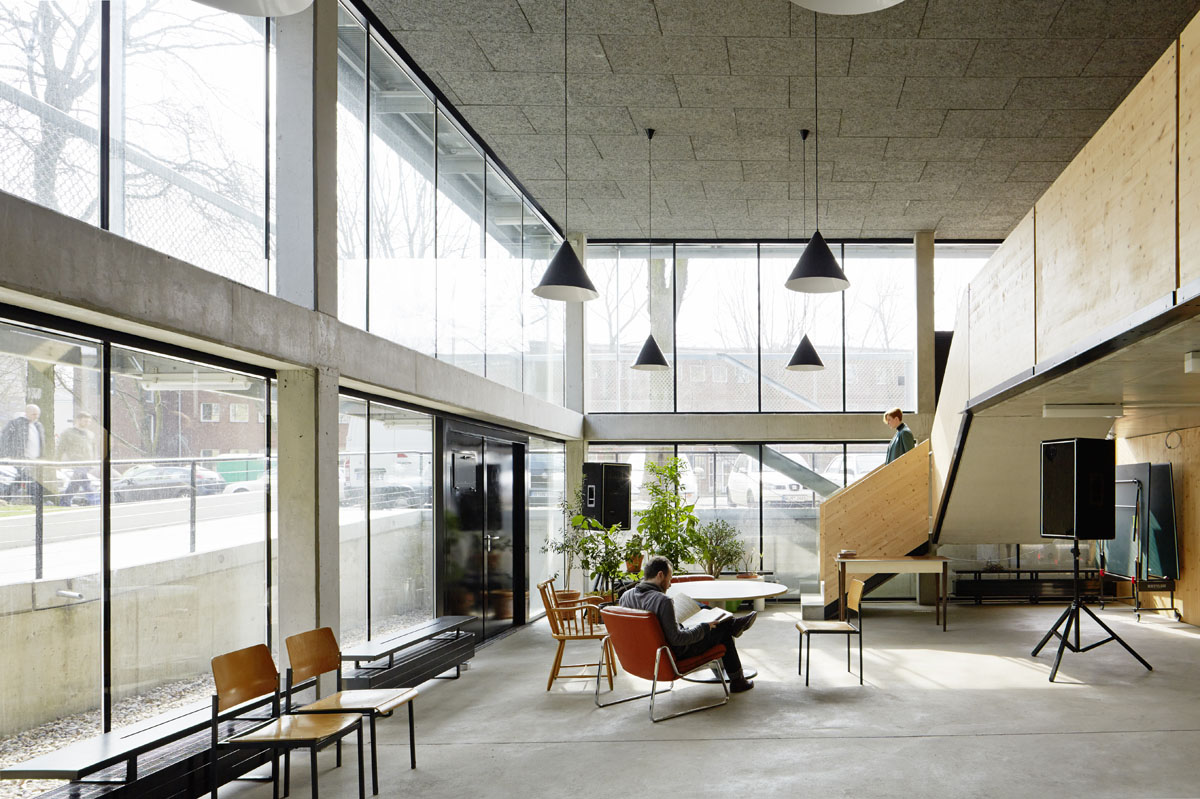 The double-height shared space on R50’s ground floor is legally considered a winter garden, allowing the full-wall double-glazed panels. This common area houses a baby grand piano, eclectic furniture, and ping-pong and foosball tables, along with a gallery-level guest room available for use by visitors to R50’s owners. The space was designed to be flexible enough to allow a later transformation into two levels, in anticipation of changes in the needs or desires of residents.

The socioeconomic dimension of this is interesting to Fezer, who cofounded one of the leading architecture and design bookshops in the city, Pro qm, home to many a debate about the state of architecture. “We have to think about the role of the architect if we have a social idea of how the profession can contribute to society,” he says. When architects like Fezer can work to counteract investment-driven development, that is a clear positive form of engagement.

The Baugruppen concept holds the promise of applicability outside of Germany. In the U.S., where 65 percent of residents own their dwellings, the swelling of the housing market’s boom, bust, and residual bruising has left many in search of new ways to acquire a home insulated from or in avoidance of the predatory developer-lender complex. A 2015 report by the Brookings Institution detailed a growing gap in proximity between low-income people and employment centers in America; both have suburbanized, but concentrated in different places, while in metropolitan centers, rent and home-sale prices have steadily increased, squeezing out both low- and middle-income sectors. While the more communal aspects of a project like R50 might smack of 1970s California communes, the building’s rational, financial, and functional planning places it firmly in another, less idealistic, category. Don’t call it a commune.

It is undeniable that architects and planners can be active facilitators and mediators of the built environment, aiding in its development and offering alternatives to the norm. Just as food trucks opened up the restaurant business to those excluded by high barriers to entry in the form of starting and operating capital, perhaps the Baugruppen idea of cohousing offers a way for more people to act as developers, cooperatively creating buildings and communities. Surely, it could be the initiative of architects to begin these processes, exercising their agency as designers, expanding their professional role.