Our columnist rides the rails in a city known more for sprawl than transit. 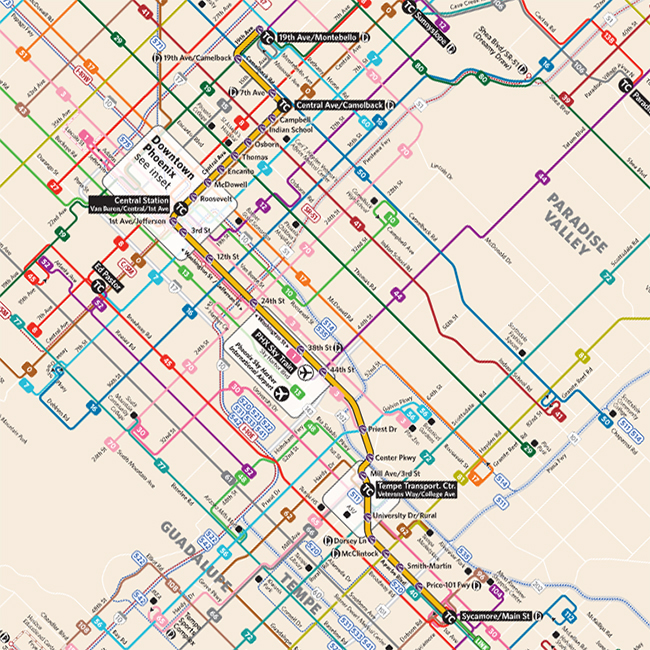 My plan was straightforward. I was going to take the PHX Sky Train from Terminal 4 of Sky Harbor International Airport to the Valley Metro Rail stop at 44th Street and Washington. From there, I’d ride the line directly to my hotel in downtown Phoenix. No big deal. It would be faster and easier, in theory, than my New York excursion: taking the AirTrain from JFK to Jamaica and picking up the J train back to Williamsburg. But in sprawling Phoenix, mass transit is a twenty-ﬁrst century phenomenon and still somewhat exotic. A single $1.4 billion 20 mile rail line opened for business five years ago, and a pair of extensions recently began construction at the far ends of the route.

The PHX Sky Train, which opened earlier this year, ran about every three minutes, as advertised, and delivered me swiftly to a futuristic tubular station connected by covered walkway to an outdoor light rail platform in the middle of sun-baked Washington Street. The surrounding landscape was bland in a way that I think of as Phoenix-speciﬁc. A generic beige airport hotel stood across the street and the overall terrain was either black asphalt or desert dust.

But in sprawling Phoenix, mass transit is a twenty-ﬁrst century phenomenon and still somewhat exotic.

The exception was the metro station, designed by DWL Architects + Planners, a ﬁrm with ofﬁces north of downtown Phoenix. The narrow platform—serving eastbound trains headed to Tempe, home of Arizona State University, and to the city of Mesa, and westbound trains traveling toward downtown Phoenix and the lively crossroads of Camelback Road and Central Avenue—was an assemblage of small acts of kindness. Overhead were a series of fabric shade canopies, and the framework in the middle of the station island supported tiers of perforated, rust-colored louvers, both of which afforded relief from the sun. A stout green drinking fountain, distinctly unpromising in appearance, dispensed wonderfully chilled water.

A streamlined eastbound train blanketed in a jumbo Coors ad arrived and departed. But no Phoenix-bound train. Another Mesa-bound train arrived. The doors opened, and the conductor made an announcement about delays. The train sat for about 15 minutes and ﬁnally pulled out. Others awaiting the west-bound train packed it in, dashed across a couple lanes of trafﬁc, and caught the nearest bus. I waited. A third Mesa-bound train came and went. No announcements were made, except for a few about not skateboarding on the platform. I waited for nearly an hour before I gave up on mass transit in Phoenix. Later, I learned that at almost the exact instant that I set foot on the platform, 1:15 p.m., a “major power event” zapped the system. Service was either slow or nonexistent for roughly an hour and resumed, predictably, the moment I dashed back to the airport to catch a taxi. 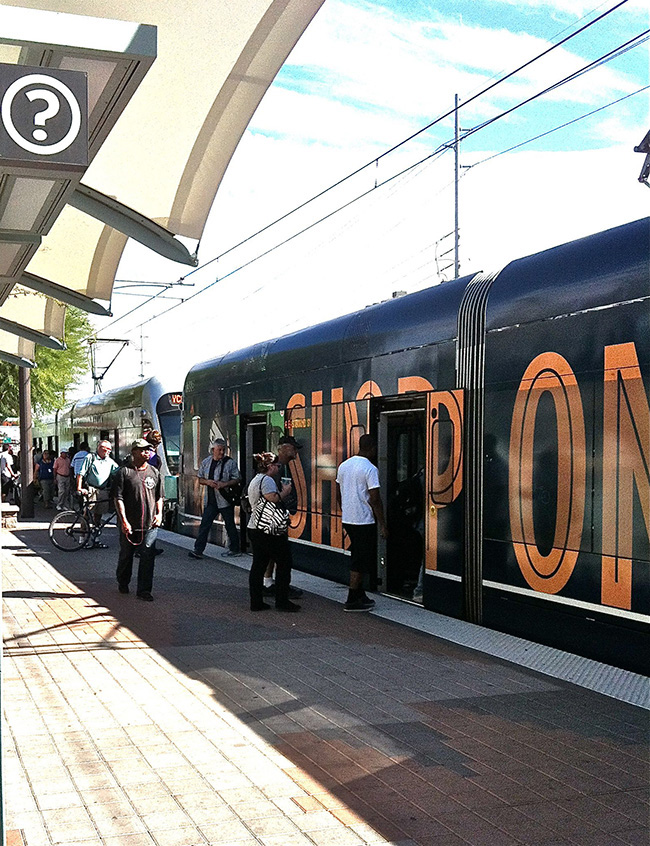 I lived in Phoenix for the better part of two years in the early 1980s. I moved from pre-grunge Seattle, where I took buses everywhere, to a city where pastel-colored Lacoste shirts and tasseled loafers were the uniform of choice and no one I knew ever used public transportation. My employer, the alternative weekly the Phoenix New Times, set me up with a leased Toyota and, like everyone else, I drove. On weekends, I’d sometimes hike a mile or so to a French cafeteria on Camelback Road for breakfast, or to a nearby shopping mall with a good bookstore. If my colleagues happened to drive by and see me, they’d voice concern when I returned to work on Monday morning: Is there something wrong with your car? Phoenix, in the early 1980s, felt nothing like a city. It was a series of shopping malls and drive-throughs linked by a grid of long, straight roads, surrounded by limitless desert.

Back then, I worked downtown and discovered that you could stand in the middle of Central Avenue after 5 p.m. for a long time without any danger of being hit by a car. Much of the city’s center felt underused and semi-abandoned. I knew that Phoenix had grown since I lived there. The metro area’s population of 1.5 million had boomed to nearly 4.2 million by the 2010 census. But it seemed like most of that growth was outward, into an endless agglomeration of desert subdivisions. However, since the early 1990s, a sort of urbanity has crept in. First, a baseball stadium and a basketball arena were built at the southern end of downtown, which attracted a cluster of restaurants and bars. Then came the decision to level Patriot Square, a park that was conceived in the 1970s as downtown’s great, unifying public space, but largely served as a hangout for the homeless. It was replaced by a complex called CityScape, a $900 million development that Valley Metro Rail counts as part of the seven billion dollars’ worth of investment it says was spurred by the light rail line. Most of CityScape, including the Kimpton-owned Hotel Palomar Phoenix and a variety of stylish restaurants, opened last year. On my ﬁrst afternoon in Phoenix, when I ﬁnally made it from the airport, the only signs of life downtown were in and around CityScape. In the central plaza, billed as a successor to Patriot Square, there was a “beach” party complete with sand and a bad cover band, where brightly costumed, face-painted, drunken Jimmy Buffett fans cavorted in advance of his concert at the US Airways Center (home of the Phoenix Suns) that night.

In the Phoenix I knew decades ago, everyone was locked in their cars.

My next attempt at riding the train was more successful. I hopped the westbound train, crowded with students, seniors, and families with young children—the line averages about 45,000 riders a day—at Central and Van Buren and rode it a mile or so north to the corner of McDowell, where the Tod Williams Billie Tsien–designed Phoenix Art Museum and the Will Bruder–designed Burton Barr Central Library anchor a modest cluster of architecturally sophisticated buildings. Even the local CVS is housed in a modern shed-style building.

Later, I decided to ride to Tempe. On the platform in the middle of Central, I sought out the shadiest spot and noticed an elderly, frail Caucasian woman with a walker sitting on one of the seats.  She was getting what sounded like a pep talk from an African-American man in his twenties, a big cheerful guy with the physical presence of a bouncer or a cop. He turned to me and asked, “Are you going east?” When I said that I was, he explained that the woman had attempted to board two trains, but was too slow, and the doors kept closing before she could reach them. He wanted to stand near the front of the train to ﬂag down the conductor and alert him to the old woman’s presence, and wondered if I might hold the doors open. When the train arrived, we went to our agreed-upon positions and the woman was able to board. At her stop in downtown Phoenix, the young man made sure the old woman got off safely.

What was striking to me, aside from the man’s kindness, was that the experience was inherently urban. In the Phoenix I knew decades ago, everyone was locked in their cars. People met each other only by choice, and tended to connect with others of their own age, economic status, and race. But this encoun-ter, while it made me question how well the system was set up to handle the elderly people who depend on it (the doors open for a mere 20 seconds at each stop), also made me feel like Phoenix was poised at the brink of true urbanity. In the capital city of a state famous for Neanderthal politics, the tolerance that comes from incidental proximity was much in evidence on this one rail line.

Tempe was still the college town I remembered, with much of its main drag dedicated to beer drinking, although a mini Silicon Valley with exceptionally shiny ofﬁce complexes had sprung up around the edges. (A sizeable portion of the university has migrated to downtown Phoenix, a circumstance made practical by the rail line.) The big surprise, again, was the train ride. Late on a Saturday afternoon, it was packed all the way back to Phoenix, a mix of ages, races, income levels, and attitudes. That evening, I was amazed to ﬁnd the streets of downtown Phoenix swarming with people—unnaturally pale, disheveled, blood-spattered people. “It’s the Zombie Walk,” a woman replied brightly, when I asked her what was going on. The annual Zombie Walk, which attracted 12,000 participants this year, began in 2008, the same year as light rail service. Cause and effect are unclear. But I started to imagine that an urbanity generated by Valley Metro Rail—much like the city of Phoenix itself—might be of a wholly unprecedented nature.

Correction: Due to an editing error, an earlier version of this article misidentified the number of Valley Metro users. The system serves an average of 45,000 commuters daily, not 10,000. The text has been amended to reflect that fact.