Fogo Island, Once an Obscurity, Now Brought to Prominence through Design

With architect Todd Saunders and designers Ineke Hans and Ilse Crawford as its advocates, the remote Fogo Island in Newfoundland, Canada, is forging a fresh identity to ensure its cultural and economic survival. 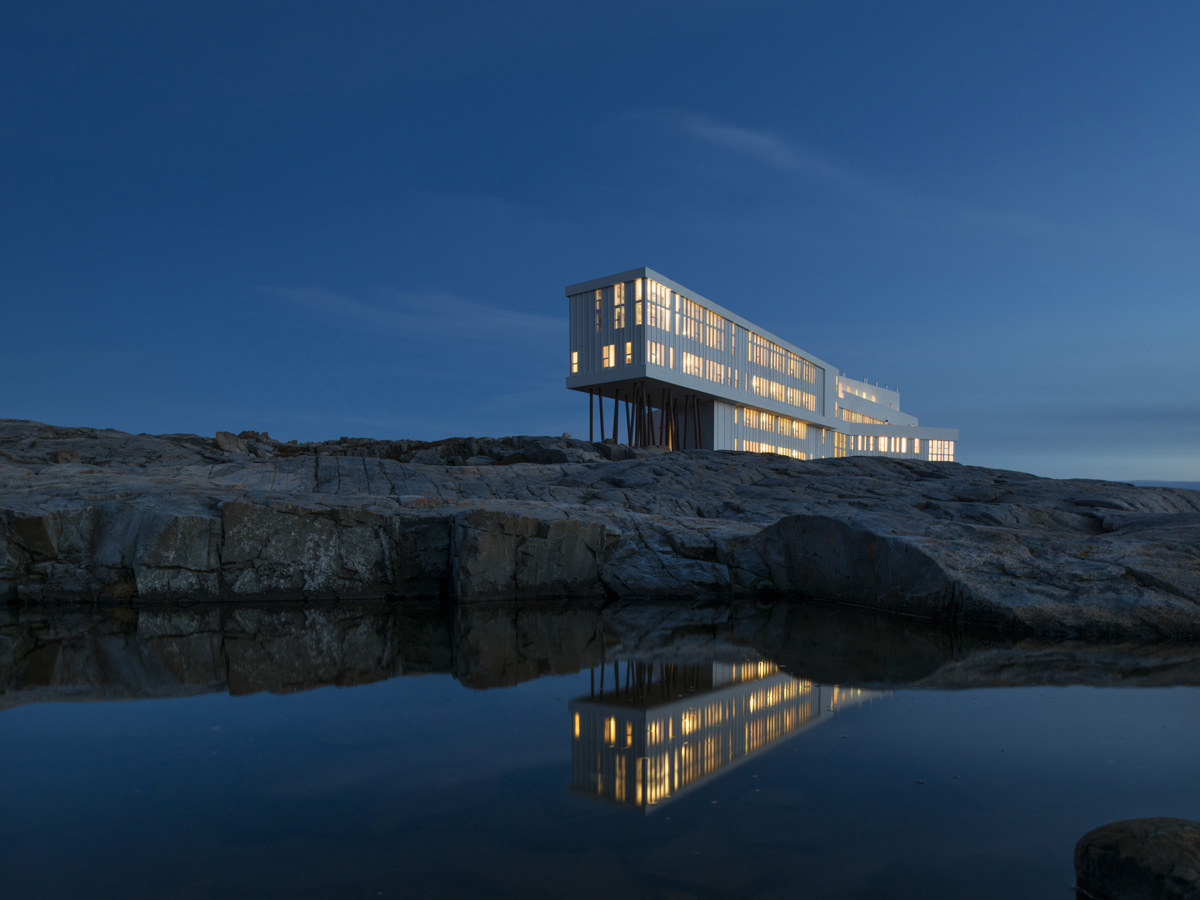 The sheer oddity of Fogo Island Inn’s exterior has earned it plenty of accolades within the travel media, but founder Zita Cobb says there’s more to it. “From the outside, the inn presents in a very austere way, but inside it’s a completely different journey.”

It sits at the fringe of civilization, an island off an island, at the arctic edge of a continent along what is dubbed “Iceberg Alley.” Understandably, Fogo Island has watched its population increasingly dwindle—as picturesque as it may be, remote living comes with its challenges.

Zita Cobb, a native of Fogo, knows full well the toll the island’s isolated lifestyle can take. As a 10-year-old, she watched her heartbroken father—an inshore fisherman—burn his boat in dismay when he realized he could no longer sustain his family due to commercial overfishing. They moved off the island soon after.

Cobb, now a social entrepreneur, returned to the island of her rearing in 2005, with an unwavering pursuit in mind—she would create a flourishing economy that would encourage young residents to stay and invest their skills in their own community. “I never lost touch with home,” she says. “I guess my motivation was to repair things and put things back together.”

Through the nonprofit Shorefast Foundation, which she established with two of her brothers, Cobb sought to revitalize the community via a series of initiatives. In addition to a microloan fund, she envisaged six studios for artist residencies, and an inn intended to ignite a sustainable tourism industry that would provide employment for locals, while sending all its profit back into community initiatives. 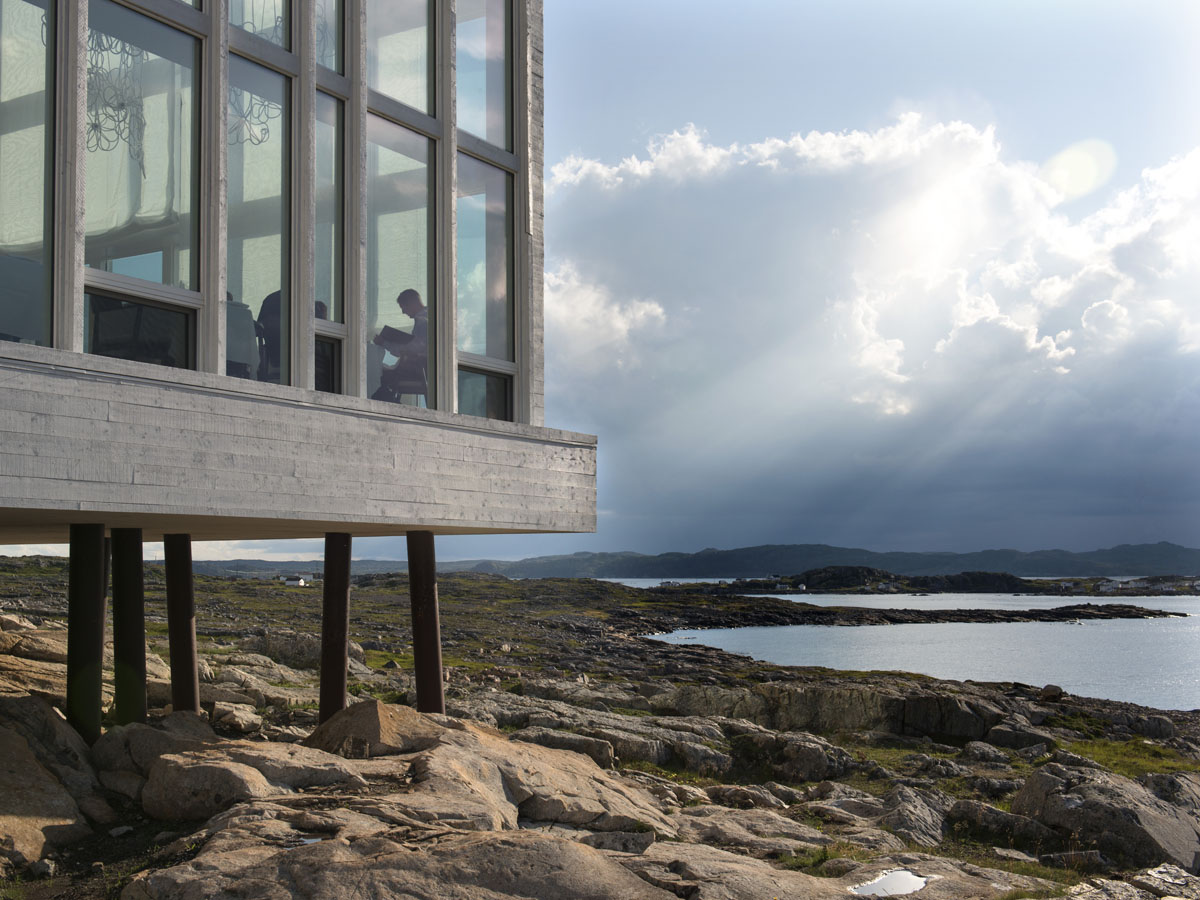 An exterior view looking into the restaurant at Fogo Island Inn, which Cobb says “belongs” to the community. To demonstrate this principle, Cobb and the Shorefast Foundation invited every single resident on the island (close to 3,000 people) to spend a night in one of the inn’s rooms, so that they could enjoy the full experience as guests.

But whom could she entrust to bring to life her vision of a “New Newfoundland Aesthetic”? Determined that it be someone who, like she, had Newfoundland coursing through their veins, Cobb chose architect Todd Saunders, who grew up in the nearby town of Gander and spent his summers on Fogo Island. Though now based in Norway, Saunders says the opportunity was intensely personal. “I put twice as much effort into that project as I have into anything else,” he says. “It was something I was thinking about every minute for about eight years.” He instinctually knew the place, people, and culture of the island, even after having been removed from it for so long, and it was this visceral sense that informed his approach. “In Newfoundland, the landscape is very pure and uncultivated, and it has been for millions of years,” he says. “I didn’t want to put a piece of architecture there that would stir up the visual presence of the place. I wanted to use my buildings almost as exclamation marks so that you notice the landscape more.”

To date, four artist studios have been built on various parts of the island, each a fascinating accent rising from the rugged terrain. Saunders resisted the urge to mimic the architecture and vibrant color schemes of the charming “salt box” houses traditional to Fogo. Instead, his palette evokes the white winter snow, the black of long nights, and the gray fog that so often cloaks the landscape. Though breathtaking views are plenty, he also eschewed the temptation to use as many windows as possible, instead choosing a “viewfinder” approach that captured one perspective. 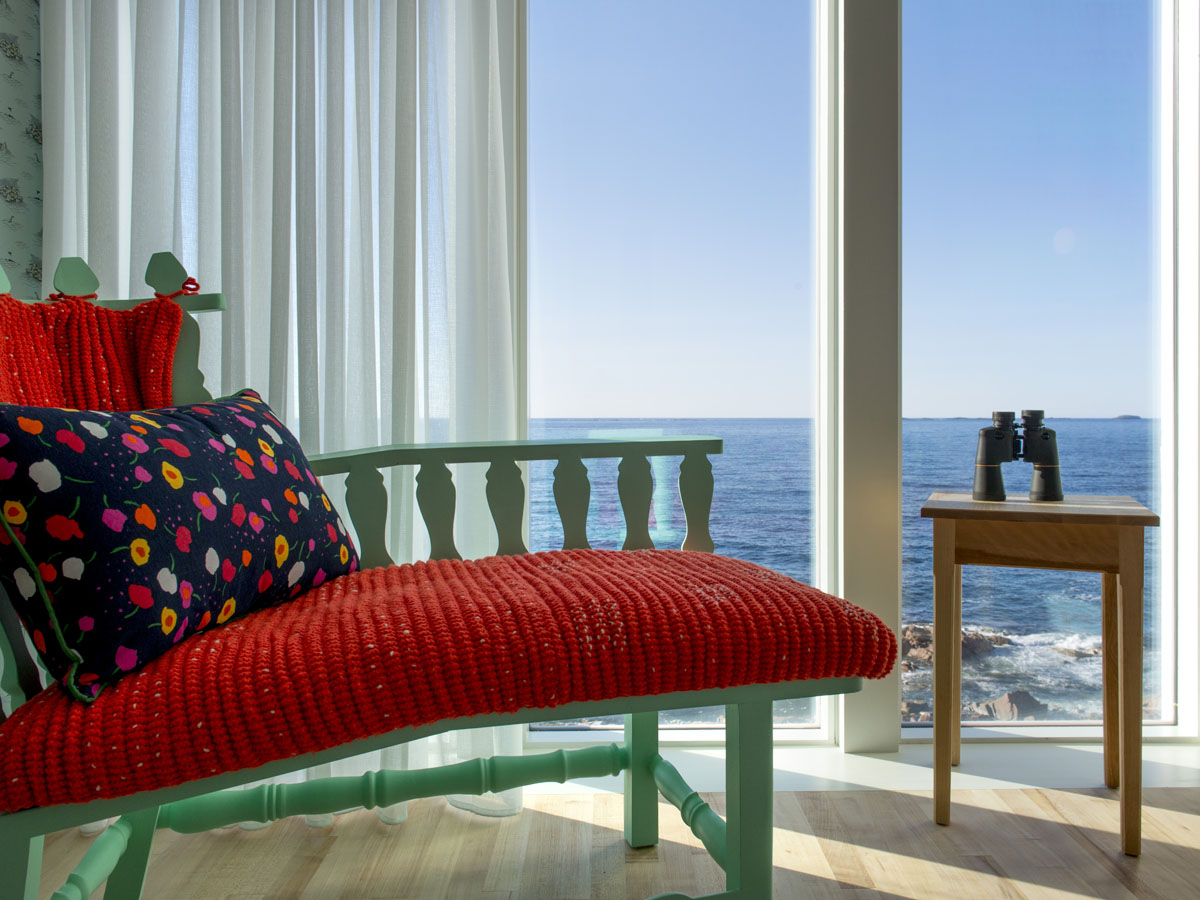 Rather than maximizing the number of rooms in the inn, Saunders chose to limit them so that all guests would have the same spectacular view. “In most hotel rooms, the bed is parallel to the window,” he explains. “But I wanted both people in a bed to be able to sit up and look out over the ocean and watch the whales go past right in front of you, so we put it facing the window.”

He followed a similar logic when positioning the rooms of Fogo Island Inn, giving them all the same outlook over the Atlantic Ocean toward the North Pole, where floating icebergs and frolicking whales form a common tableau. Since opening in 2013, the inn has become a darling of the luxury travel media, attracting a stream of curious visitors who make the arduous trip to dwell in one of its 29 rooms. An asymmetric X-like structure hoisted on stilts, the building itself looks anything but traditional, and that’s exactly what Cobb had hoped for. “I’m not a big fan of the way architecture and design have been practiced, because I think it’s been an egotistical journey for many of the practitioners,” she says. “At Fogo, I worried that if we didn’t do it well, it would be ridiculous. But I worried more that if we didn’t do something new, we’d just be spending money to show the world that we have no new ideas.”

Though his buildings might be the most symbolic of Fogo’s revival, Saunders wasn’t the only one called upon to help shape the island’s updated aesthetic. In crafting the interiors of the inn, Cobb first sought the guidance of British interior designer Ilse Crawford, who came to the island and—to the horror of locals (most of whom can’t swim)—took a dip in the ocean every single day. 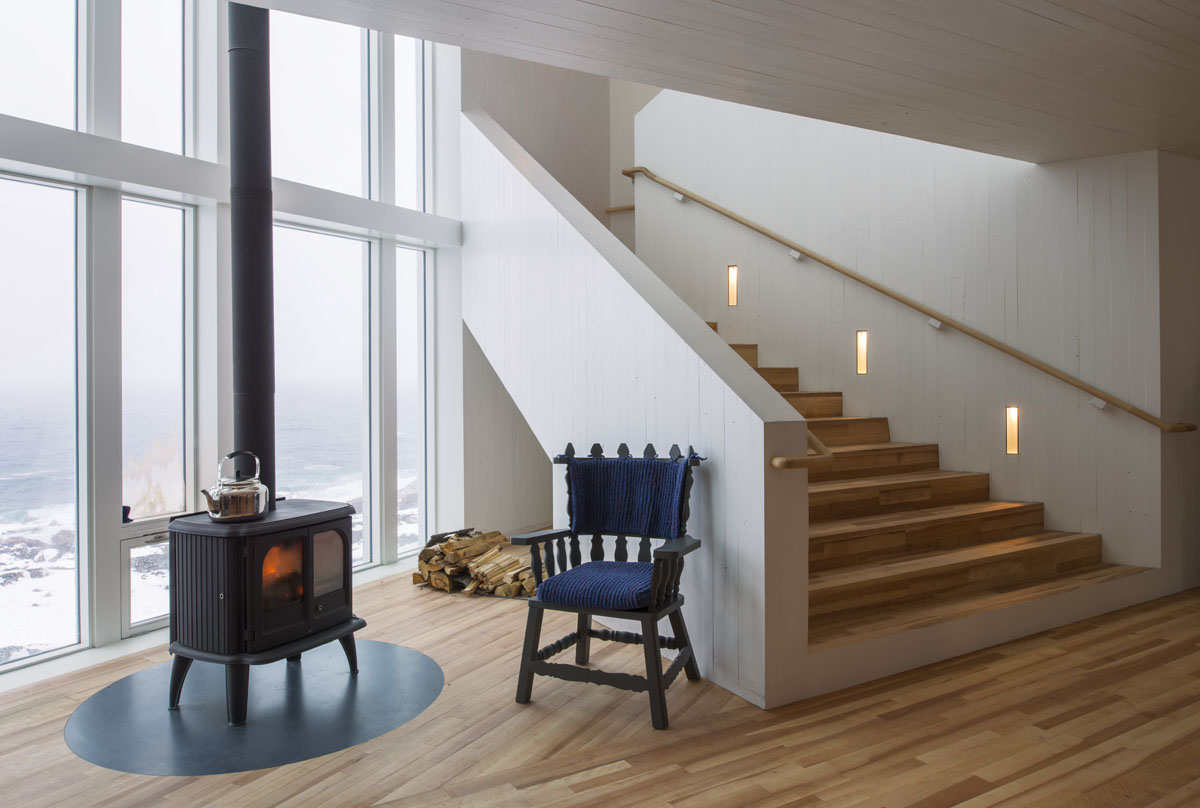 “Ilse didn’t want to do an interior design for us because that wasn’t what we needed,” Cobb says of their initial meeting. “It was something that had to be done object by object.” Instead, Crawford advised the foundation to invite certain local and international designers to the island to collaborate with its craftspeople to develop the furnishings, textiles, and furniture for the inn. Playing “matchmaker,” Crawford suggested several designers she thought would connect with the culture and history of Fogo Island. Among them was Dutch designer Ineke Hans, who designed several chairs with the help of Fogo’s boatbuilders, coopers (barrel makers), and quilters. 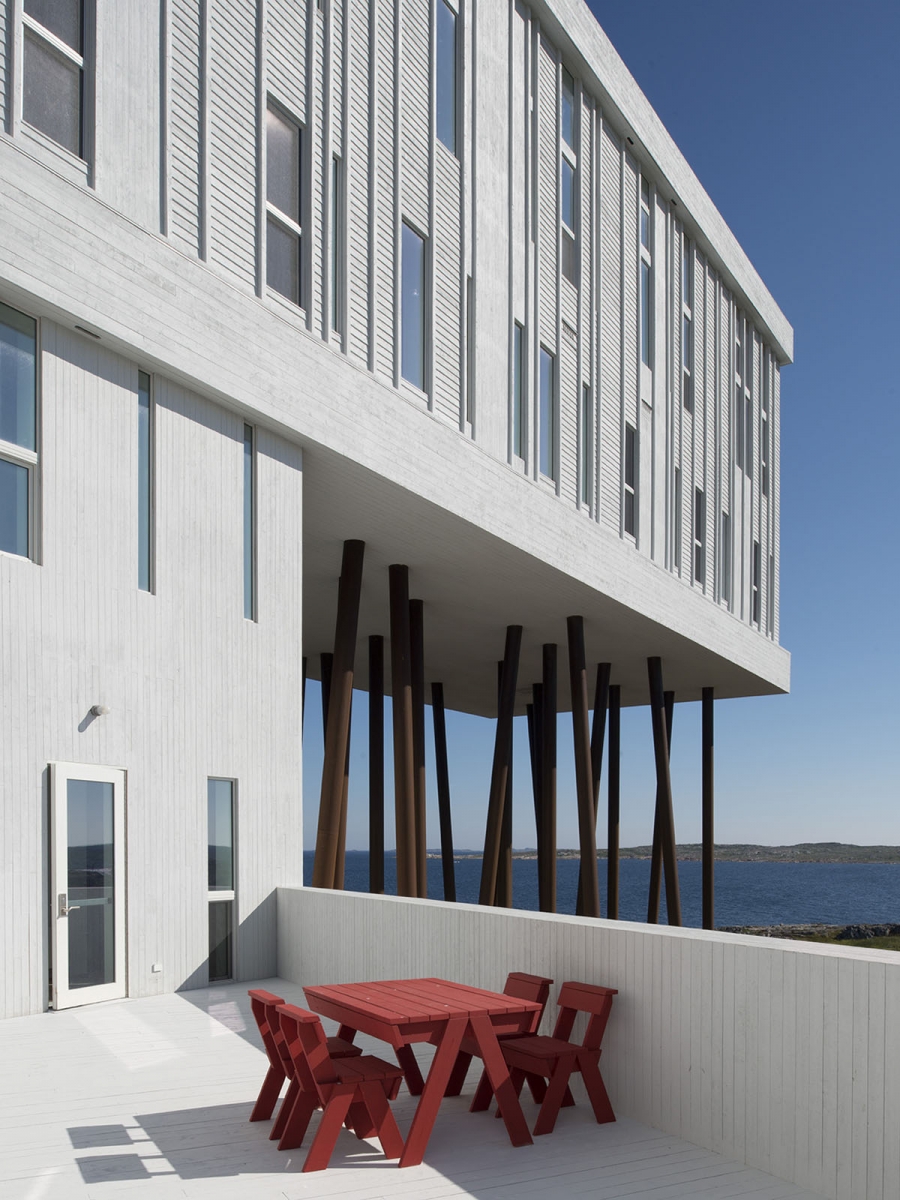 “When I arrived on Fogo, it felt very much like home,” Hans recalls. “To me, the sturdy landscape, traditional furniture, and Fogo Islanders all fit in the same melting pot and I wanted to acknowledge that in mydesigns.”Inanodtotherobust“outport furniture” traditional to the island—as well as its wood-turning traditions—she designed an indoor rocker and Windsor bench using turned wooden-spindle halves. Referencing the bright colors and plank structure of local houses, her collection also features outdoor seating for the inn’s terrace—as the winds on Fogo can be treacherous, Hans devised the chairs and tables to be heavy enough not to blow away. Several of these products are available for purchase through the Fogo Island Shop (though they might prove to be rather bulky souvenirs), as well as the Toronto-based showroom Klaus by Nienkämper.

Almost two years since the inn’s opening, Cobb says she increasingly hears about younger Fogo Islanders who have previously left and are now returning home to live and work. Yet, armed with a collection of idea-filled napkins—remnants from brainstorming sessions with Saunders whenever he returns to the island—she says her vision of the “New Newfoundland Aesthetic” is far from complete. “We’ve been handed a legacy, and just because we’re rural people doesn’t mean we’re backwards—nobody here wants to live in a museum,” she says. “I think the challenge for every culture and community is how they adapt and remain relevant in the world, while staying consistent with who they are.”