Go Toward the Light

A large-scale light installation persuades viewers to get involved

Ever found yourself engaged in a mindless activityin public—adjusting your tights or “scratching” your nose—only to have it suddenly dawn on you that someone has probably been watching? You may want to check that subconscious behavior at the door of Drawing Lightscapes, a light installation that invites the viewer to be viewed.

Orion
(All images courtesy the artists unless otherwise noted)

“It’s hard to project a sense of humor into architecture,” Yael Erel, herself an architect, told me at last week’s opening of the show. But Erel, along with her gaffer/poet partner, Avner Ben Natan, manage to inject a sense of playfulness into the field with the latest work from their firm Lightexture. “It’s an architectural investigation as much as it is an art show,” she adds.

Erel and Natan, in collaboration with ceramic artist, Sharan Elran, create six distinct environments using an array of custom light fixtures to draw patterns of light onto massive screens. The works can be viewed unobstructed—as light patterns on screens. But I found it interesting to watch others weave their way through the pieces, casting shadows as they immersed themselves in the ethereal maze of light. Contributing to the art was even more fun. And if I was being watched? Well, that’s the participatory nature of the work and part of the whimsy it induces. 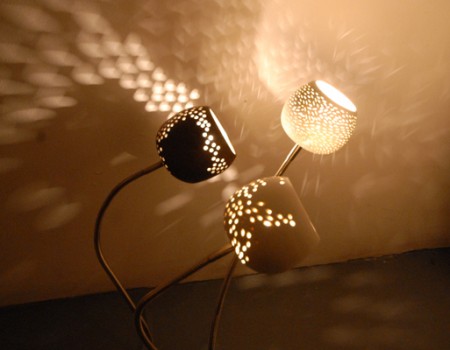 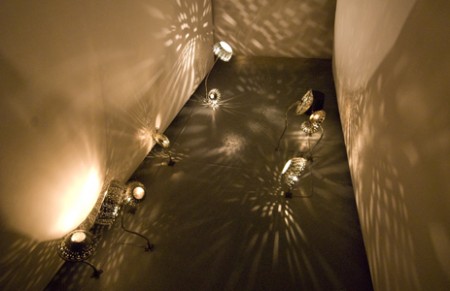 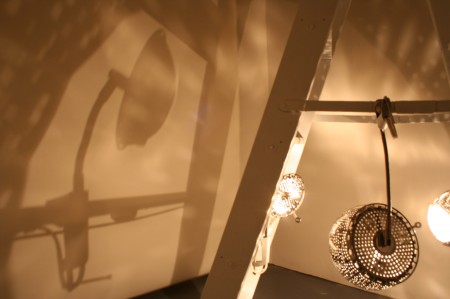 “We’re really drawn to the transience of the show,” Erel explained as she adjusted the filter of a lamp, shifting the drawing from tiny bright polka dots, to a wider, soft spray of light. “The work is not fixed.”

And as viewers made their way through the pieces, either intentionally manipulating the light or just milling around sipping plastic cups of wine, they constantly shaped and reshaped the lightscapes, maybe entirely unaware that someone else was watching.

Drawing Lightscapes, curated by Dina Krunic, is on view at NYC’s MC Gallery through February 27th. The space will host performances of the band King Dancer throughout the run, as well as a closing dance performance from the group ‘ann and alexx make dances.’ For more information, visit http://www.gallerymc.org