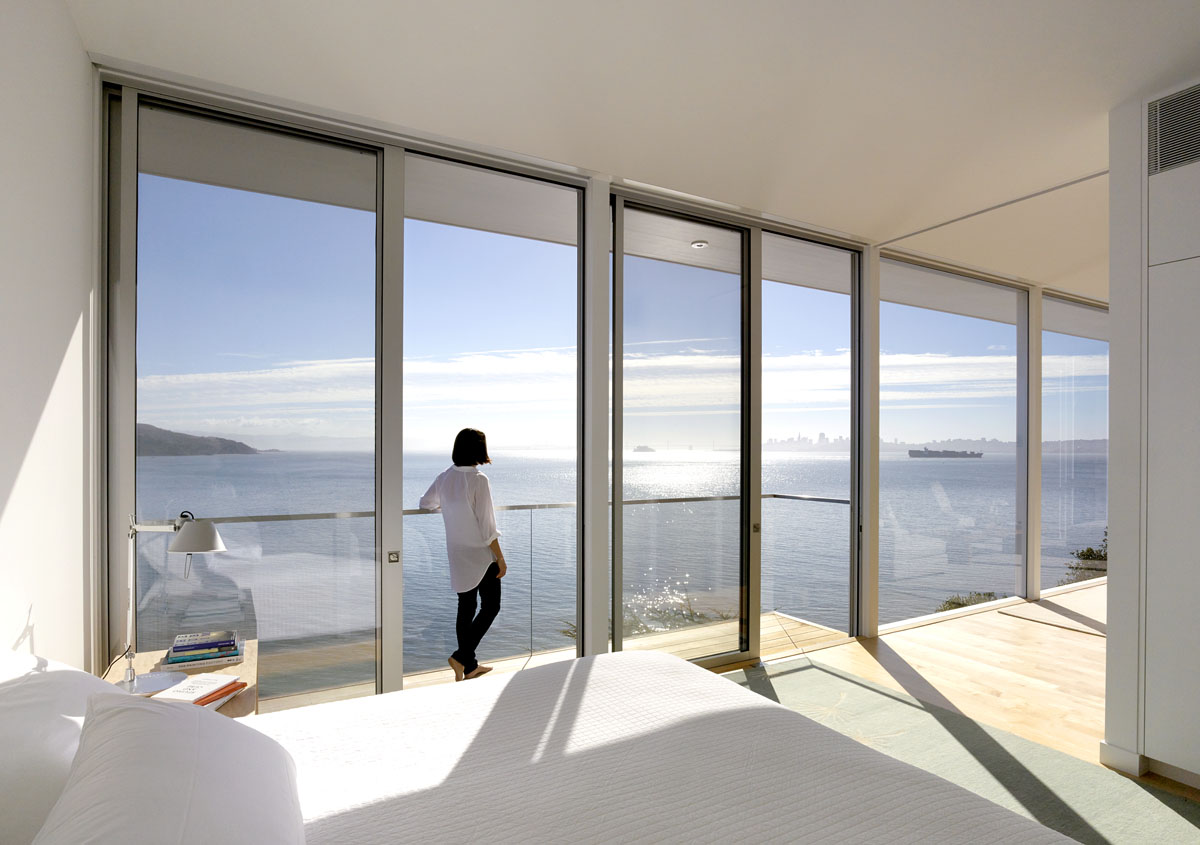 The sea-facing master bedroom has a balcony and full-height Fleetwood windows, while glass walls in the other rooms open to verdant gardens.

At a quiet intersection in Sausalito, California, sits a windowless, expressionless box, with white slatted paneling and a black zinc roof. It’s no bigger nor more impressive than a double-wide storage unit. At street level, this 1940s ranch house remodel hardly reveals how much beauty is tucked away just beyond the edge of the slope.

Built on a steep grade, the house itself is actually below road level, falling away from the hill. The box on the street is just the garage. Inside the front gate are verdant gardens that enliven a series of terraces cascading toward San Francisco Bay. The back end of the house is a wall of Starphire glass fit in a Fleetwood frame. Like the captain’s bridge of a massive container ship, the square windows purvey the panorama high above the water. A small steel-railed balcony juts off the master bedroom.

The goal was to “transform a ‘ho-hum house’ on a spectacular site into a renovation that is both worthy of its location and a great living experience,” explains Mary Griffin, the remodel’s lead architect and a partner at Turnbull Griffin Haesloop. 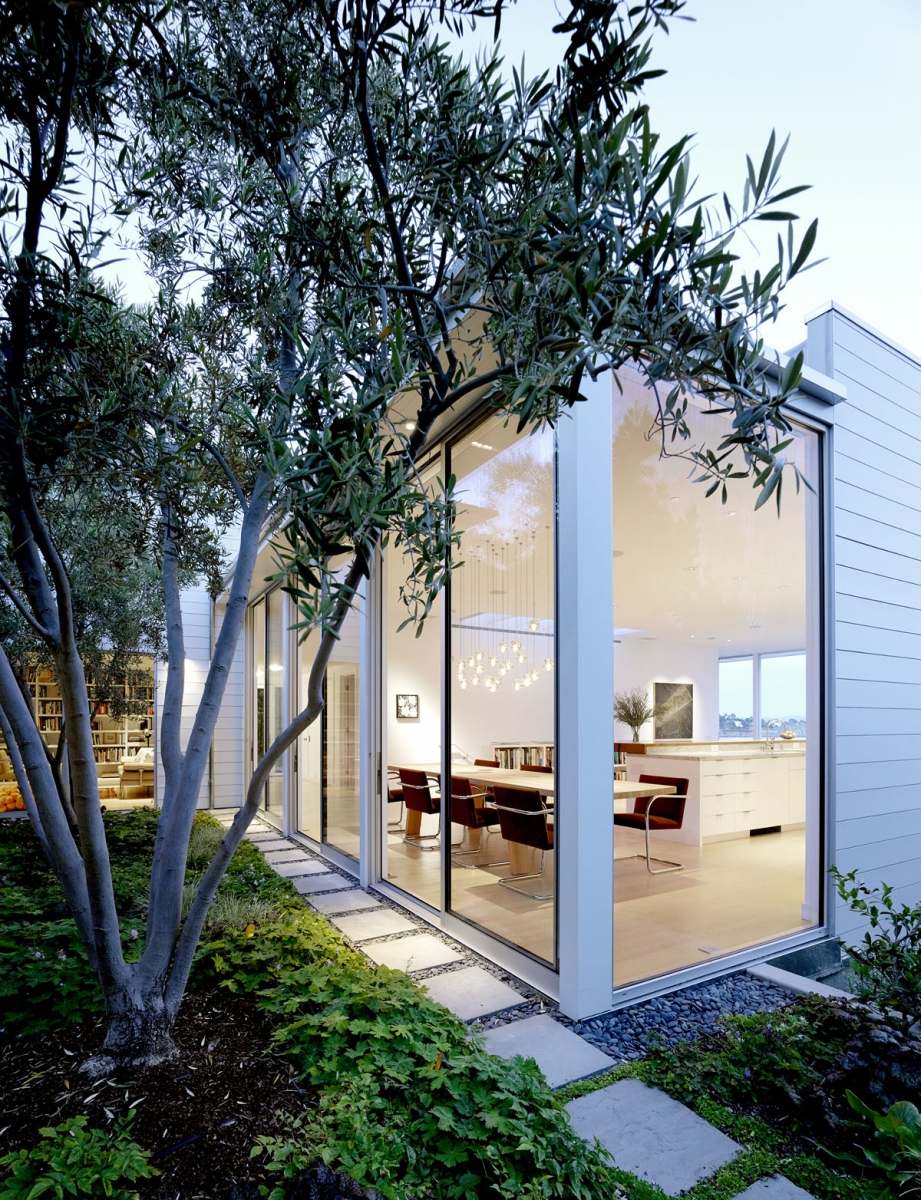 The main living areas of the Sausalito remodel are one level below the street, allowing the entire floor to be “a serene retreat that is poised between the land and this watered view,” says Mary Griffin.

The house is elegant, but the view is paramount. Every day is an intricate ballet of white sails, hustling ferries, behemoth cargo ships, fishermen, and gliding gulls. At night, the San Francisco skyline pierces the black and the Bay Bridge glistens like a diamond necklace. “The proximity to the water and the variability of what’s happening is what makes it such a dynamic, exciting view,” Griffin says. “It’s impossible to walk into that house and not head straight for the windows.”

The original structure was composed of two adjoining units, cluttered with partitions and a gabled roof that obstructed the view. Griffin, along with Stefan Hastrup and John Kleman, removed the roof, opened the interior, and created a minimalist design that amplifies the surroundings. A narrow marble counter and a parallel staircase draw the focus of the space toward the back windows. A cove of couches invites spectators to sit and stare for hours. 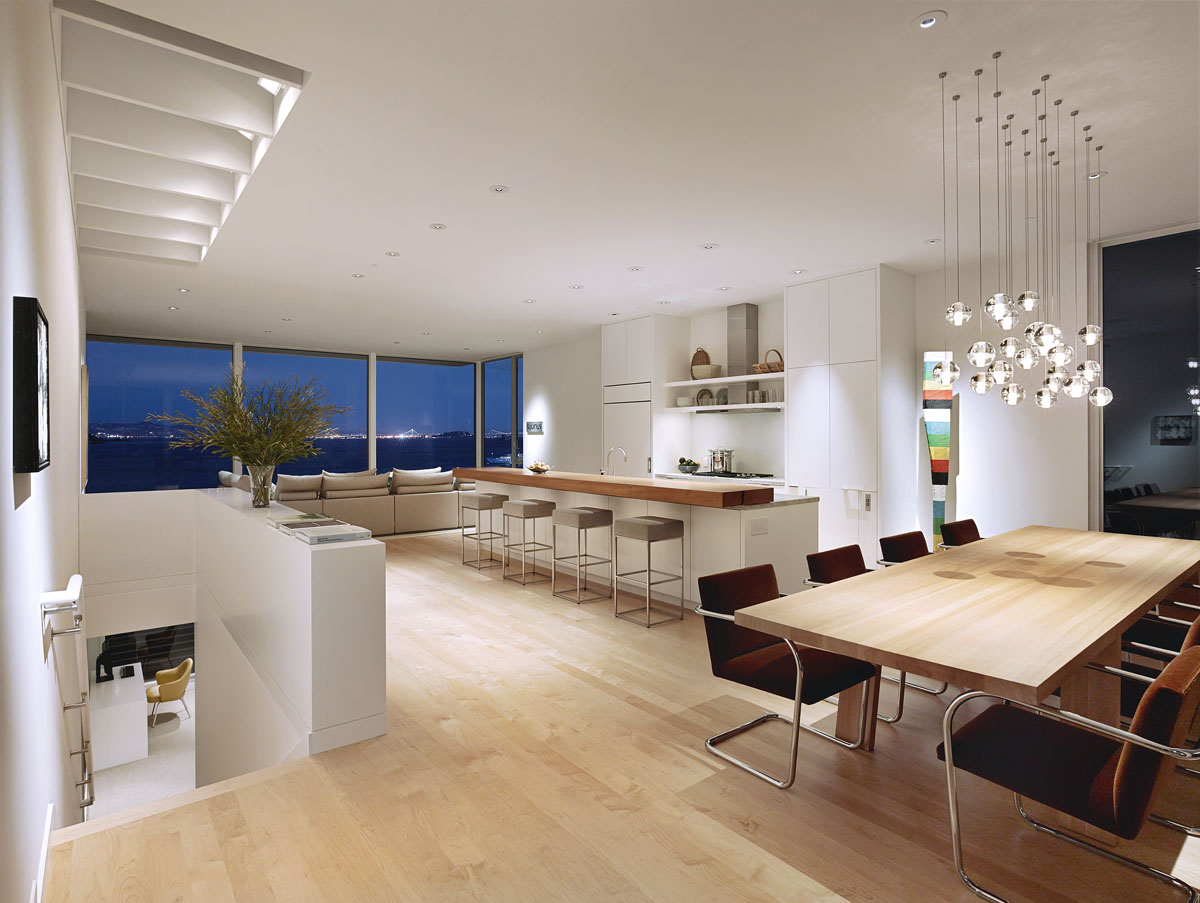 One end of the living space is anchored by a Minimo table, designed by Piero Lissoni for Porro, and a group of Bocci’s Series 14 lights. The couches at the other end are perfect to take in the view. In between, discreet cabinets and a wooden bar custom designed by Charles Marpet make for an unobtrusive kitchen.

Skylights cut into the ceiling cast natural light throughout the house. As the colors of the day shift—from the gray fog mornings, to golden afternoons, to purple dusks—the house is transformed, creating a different experience room by room, hour by hour.

Griffin was deeply influenced by what she learned from Bill Turnbull, her late husband, and Charles Moore. “Bill was a master at reading landscapes and understanding how any architectural move could enhance one’s experience of a place.” she says. “In the Sausalito remodel, we are continuing to explore that idea . . . [to] make the house a place of repose to fully experience the ever-changing view.” With the house at the center, a galaxy of beauty revolves around it.