In the wake of devastating hurricanes and superstorms, a strange new kind of house is emerging. 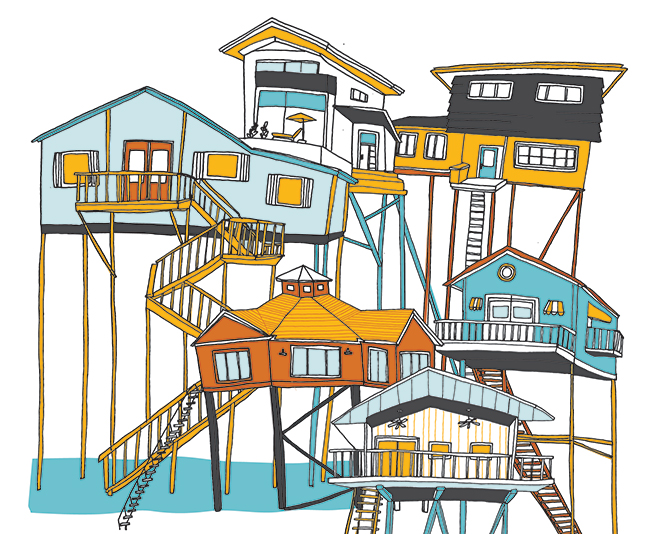 I’ve visited the Mississippi Gulf Coast at odd intervals since Hurricane Katrina struck almost eight years ago, and have been keeping tabs on an emerging architectural typology. Ordinary suburban-style neocolonials and ranch houses are being jacked up on sturdy wooden or concrete piers ten or 20 feet in the air, the heights dictated by the Base Flood Elevation set by the Federal Emergency Management Agency (FEMA) and enforced by insurance companies. These houses fascinate me because most of them make few concessions to the fact that they’re not built at grade. They look as if someone has played a cruel joke on the owners, as if the family had gone out to dinner and come back to find their house out of reach.

On my most recent trip to Mississippi, earlier this year, I marveled at the concentration of such houses in Waveland, a town nearly obliterated by Katrina. House after house hovered in the air, generally accessible by long sets of stairs, front and back. Underneath, a car or pickup truck might be parked. There were occasional attempts at landscaping below, and tentative arrangements of outdoor furniture. “It’s a necessity, but it also gives you an outdoor room,” one Waveland resident told me. “You have shade.”

I know a little about the prehistory of these houses. About six weeks after Katrina, the then-governor of Mississippi, Haley Barbour, invited New Urbanist architect supreme Andrés Duany to bring pretty much everyone he knew to Biloxi to envision a rebirth of the storm-ravaged Gulf Coast. The Mississippi Renewal Forum, as it was called, filled a giant ballroom of the Isle of Capri casino with some 200 industrious, inspired architects, planners, and engineers, all champions of pedestrian-oriented development.

But after several feverish days of dream-ing up antebellum casinos and neoclassical Walmarts, reality intruded. In the wee hours of day four, the conference leadership received the newest flood maps for the Gulf Coast from FEMA, and they showed Base Flood Elevations that were five to ten feet higher than those the designers had been working with. In the Velocity Zones, areas most likely to be impacted by a storm surge, the lowest habitable floor of a home sud-denly had to be 21 feet in the air.

“I think the problem is totally recalibrating the aesthetic,” Duany said, leading an emergency meeting. “It’s not taking antebellum houses and cranking them up. The aesthetic has more to do with lighthouses.” While others in the room pointed out the political and economic ramifications of the flood map—some towns might not be able to rebuild at all, poor people would be driven off the coast for good—Duany was nonchalant. “It will be like Tahiti,” he said. “Totally cool.”

I recently took another look at the architecture report issued by the Mississippi Renewal Forum, a compendium of the renderings that were made there. I found several pages of elevated houses, drawn by Alabama architect Gary Justiss in response to those troublesome FEMA maps. On the page, they look like parody. There’s an elevated New Orleans–style cottage with about 25 feet of mega-shutters concealing a massive amount of empty space below the first habitable floor and a forlorn figure standing at street level. Another one looks more like a fire tower than a home.

“To be totally honest, we were giving it our best shot, to make them look as not-ridiculous as possible,” Justiss recalls. “I think what we realized was that this strategy wasn’t going to work once you get past 12 feet off the ground.”

The amazing thing is that there are currently homes in Waveland that are every bit as exaggerated as those that Justiss drew in a state of mind that he now characterizes as “the fog of war.”  And, in a way, the most successful one I’ve seen—and the most eccentric—could have come directly from one of his renderings. It’s a round house that interposes a deck level between the first occupied floor and the ground. Chemosphere meets yurt.

Granted, as Duany implied with his Tahiti comment, there always have been elevated houses at the beach. There are plenty of homes sitting on pilings along the Jersey Shore and in the Carolinas. But it’s harder to accomplish if you’re trying to maintain a degree of urbanity. How do elevated homes work in a place where street life and sociability is valued?

The person who probably has the most experience with this conundrum is David Perkes, the director of the Gulf Coast Community Design Studio (GCCDS), part of Mississippi State University. With funding from the Department of Housing and Urban Development, his program has designed some 300 homes, half of them elevated, to help low-income homeowners hang on to their properties. He describes one strategy for making a house that complies with FEMA requirements without destroying the city’s social fabric: “The stair is part of a big two-story screened porch, so when you come to the stair at grade, you’re opening the porch door. There’s a doorbell down there. It’s your entrance. It’s more of a piece of architecture because of this screened-in lower entrance.” The GCCDS website shows elevated houses, none as tall as those in Waveland, that use generous porches, sometimes multilevel, to maintain a street connection.

Now, I can understand why someone in Waveland or Biloxi would go to great lengths—or heights—to hang on to their home. It’s harder for me to see why a developer would build a community of luxury homes from scratch in a Velocity Zone. But that’s what’s happened on the east end of Galveston, the barrier-island city that was famously wiped out by a hurricane in 1900 (which still holds the record as this country’s deadliest), and was thoroughly chewed up by Hurricane Ike in 2008. The aptly named Beachtown, a cluster of million-dollar-plus homes, was laid out by Duany Plater-Zyberk. It promises “a simple life by the sea,” but no such thing is on offer.  The development sells homes built to a construction industry standard called “Fortified…for safer living.” And they’re actually elevated, according to Chad Cooper, who was the project’s town architect, higher than the 16–19 feet called for by FEMA. “For every foot we went up we’d get a break on the insurance. So we started to go two to three feet above the flood elevation for each house.”

The resulting houses are elongated Victorians, inspired by Galveston’s historic architecture, but with this tall, spooky, unoccupied lower level. Again, Justiss’s delirious renderings were prescient. It goes without saying that the added height pretty much destroys the front porch conviviality that’s the hallmark of New Urbanist design.

Of course, the Gulf Coast is nothing like Tahiti. And neither, for that matter, is the New York City metropolitan area, where, in the aftermath of Hurricane Sandy, we have suddenly begun confronting FEMA’s dreaded Base Flood Elevations. As a result, New York City has recently eased height restrictions in some waterfront neighborhoods to allow homes to be raised above flood level without sacrificing floor space. And the planning department is making noises about ensuring that New York’s elevated homes maintain “visual connectivity with the street” and don’t engender “unnecessarily stark landscapes.” Easier said than done.

This is why I’m anxiously awaiting New York City’s approach to the elevated home, especially the announcement later this month of the four finalists for FAR-ROC, a competition to develop an 80-acre, city-owned site in the Rockaways. On the site, Arverne East, where 1,500 units of low- and mid-rise housing will eventually be built, the new Base Flood Elevations call for usable space to be ten to 16 feet above sea level. According to the design brief, the goal is to “use Arverne East as a laboratory for New York City to identify and explore best practices in waterfront development for the twenty-first century and beyond.” What that suggests to me is that this might be the right place for the gangly adolescent housing that shot up on the Gulf Coast in the wake of Katrina to morph into a sophisticated urban form. Maybe here, at long last, there’s the potential for “totally cool.”