In Brisbane, An Innovative Laboratory Complex Is Home to Pioneering Medical Research

To facilitate collaboration, the Translational Research Institute puts sunlight and green space at its heart. 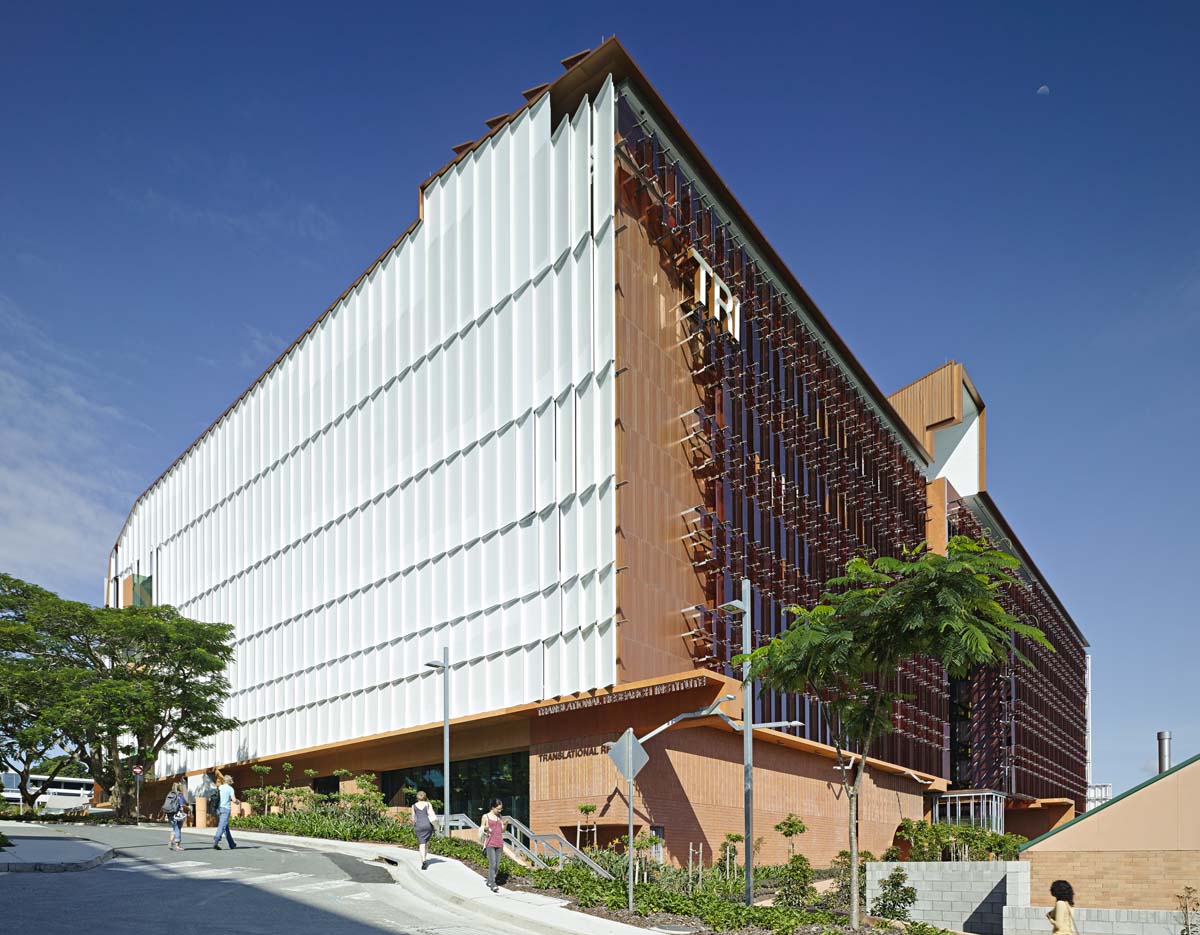 The 344,000-square-foot Translational Research Institute (TRI) embraces Brisbane’s subtropical climate through a variety of measures. Rose-tinted engineered glass on the northern facade modulates sunshine in the workspaces. A sun screen of perforated aluminum shades, clipped to the eastern and western sides, provides optimum ultraviolet protection while opening up key views.

It’s not often that the aspect of chance is considered a positive thing in the world of medicine, where the smallest error can determine life or death. But at the Translational Research Institute (TRI) in Brisbane, Australia, chance encounters are leading to lifesaving discoveries.

The largest medical-research institute in the Southern Hemisphere, the 344,000-square-foot TRI is perched at the rear of Brisbane’s Princess Alexandra Hospital (PAH) and comprises four floors for research support, administration, and teaching. TRI is particularly unique because it’s one of the few institutes in the world that has an attached biopharmaceutical manufacturing facility. This means that new treatments and vaccines can be discovered, produced, clinically tested, and manufactured in one place, in a process coined “bench-to-bedside care.” The treatments are then trialed with actual patients in the TRI Clinical Research Facility at PAH.

Key to TRI’s conception was the idea of a synergistic community, bringing together researchers who would otherwise be tucked away in separate small laboratories across Brisbane, and providing them with space for collaboration, both formal and informal. TRI’s four founding institutions—University of Queensland, Queensland University of Technology, Mater Medical Research Institute, and PAH—now combine their expertise to combat serious diseases such as cancer, diabetes, HIV/AIDS, and malaria.

The TRI building itself is the work of local firms Wilson Architects and Donovan Hill (now BVN Donovan Hill), who combined their creative nous to submit the winning entry for the original design competition in 2004. Opened in October 2013, TRI strikes a conspicuous silhouette on the southern fringe of Brisbane’s inner city, most notably for the large gap in the middle of its facade. This greenery-filled outdoor room—called the “atrium” by TRI employees despite being open on one side—is accessible to the public and has become a congregational focal point for the entire institute to use for breakout, respite, and, most significantly, chance meetings. 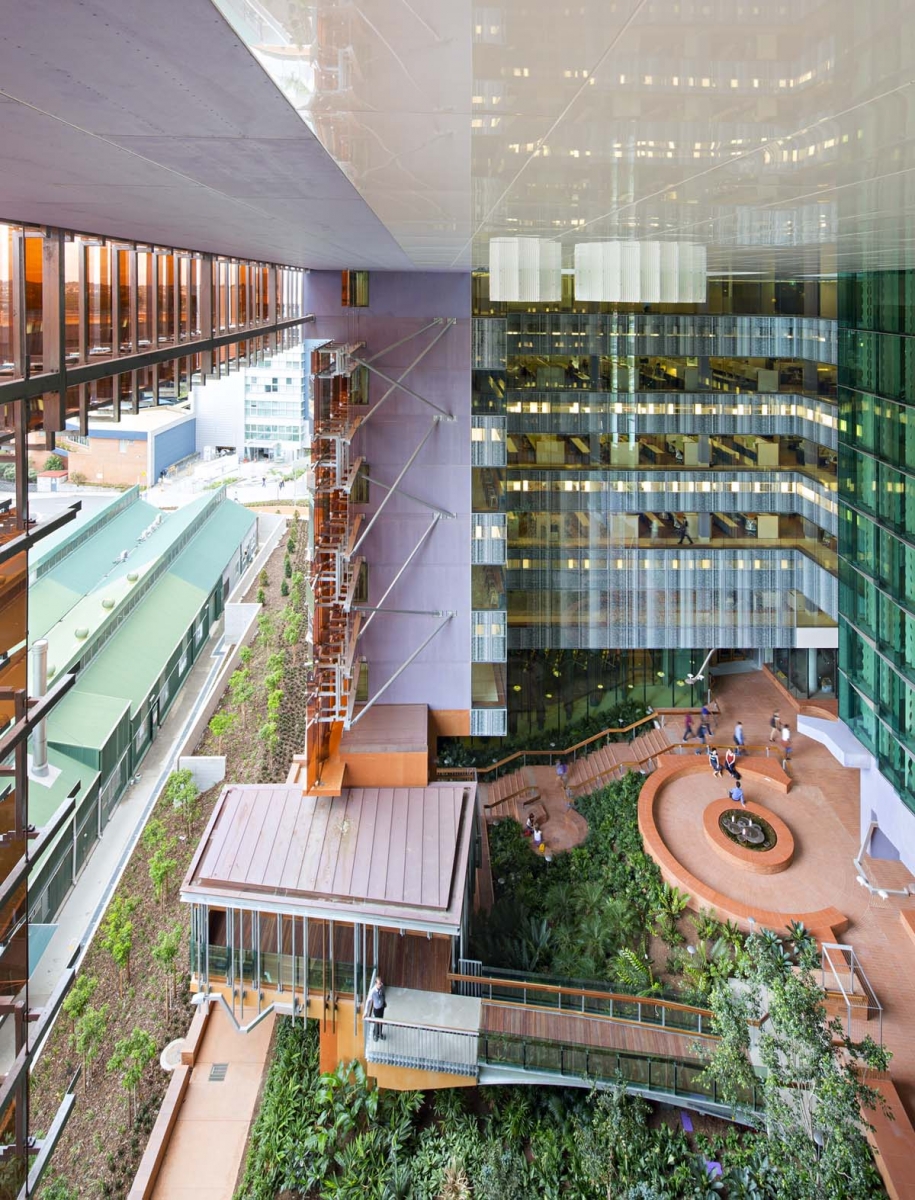 The green “atrium,” open to the elements, is essential to the concept of the building. The laboratory spaces all look onto the atrium. On the ground level, there are many interaction zones around the green space.

John Thong, an architect at Wilson Architects, says that creating a green space was fundamental to the original design. “It forms a unique space in what is a fairly harsh context—a hospital. The site overlooks rail yards, industrial warehouses, and service buildings, so the atrium represents a landscape within that harsh environment. The greenery also provides a soothing outlook from the workspaces.”

Being so close to PAH, TRI’s atrium has become an extended communal space for the hospital’s staff, as well as its patients and their families, providing relief from the grim hospital milieu and welcome exposure to natural light. “Due to the complex planning of hospitals,” Thong says, “there’s often a lack of these types of spaces—it’s green, shady, and cool, and provides that connection with the outdoors.”

Another distinguishing design feature is the full-length glass walls that create a sense of complete transparency throughout the building. This not only enhances the feeling of collaboration among TRI’s researchers, but also allows visitors to view the institute’s goings-on while using the public atrium. 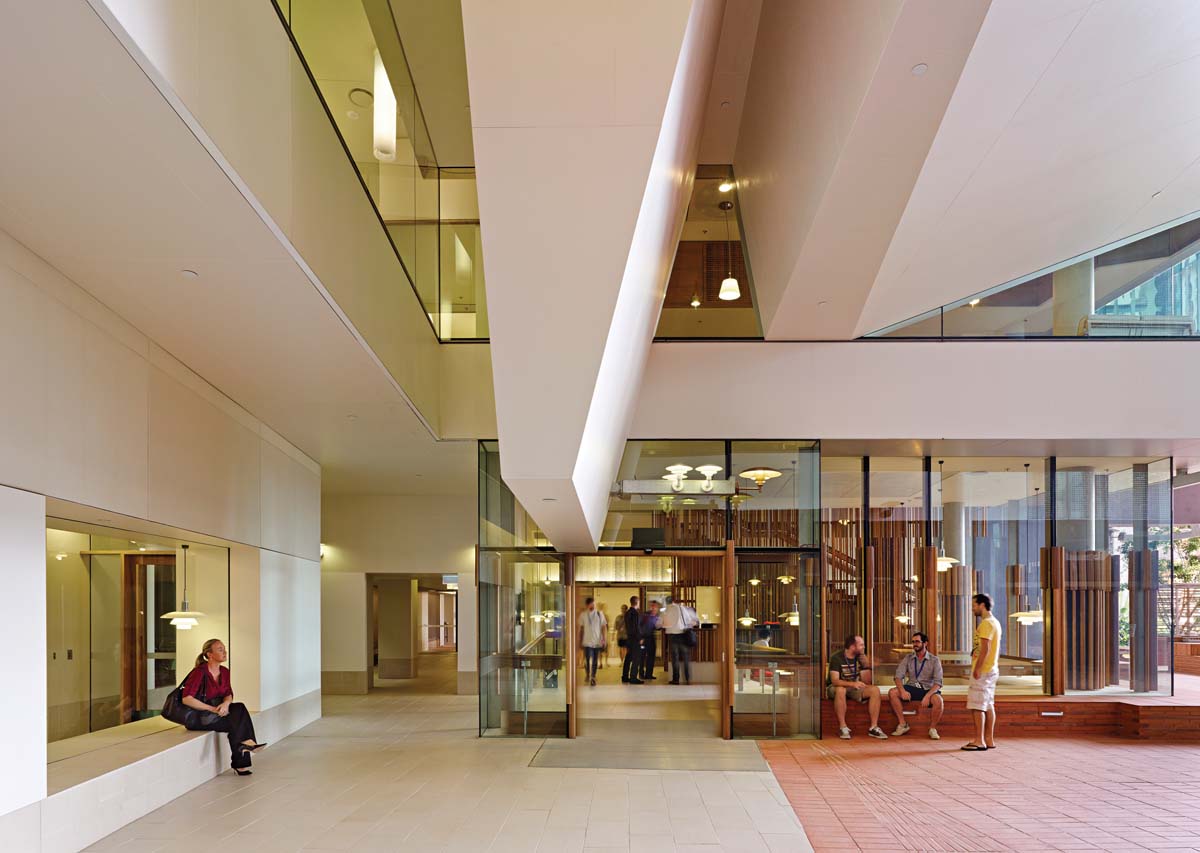 Transparency is a fundamental feature of the building and encourages interaction between the researchers. Strong pedestrian connections help employees and patients go back and forth between TRI and PAH.

“It’s a beautiful building,” says Dr. Brian Gabrielli, who works at TRI as head of the Cell Cycle Group at the University of Queensland’s Diamantina Institute. “Whenever you walk in each morning, you feel like you must be doing something important. Having that central atrium with the full-length glass really assists with integration, because—even though you’re on different floors—when you’re walking around in the office area, you can basically see everywhere else.”

The design also has its challenges. “One of the deficiencies is that the floor is set up in two halves because of the atrium,” Gabrielli says. “I don’t see some of my colleagues except for at meetings every one to two weeks—even though we’re on the same floor. So you have to set up other means that ensure the interactions that need to occur do occur.”

Fortunately, the atrium’s café has become an informal meeting place for both staff from TRI and clinicians from PAH. An unexpected benefit of the full-length glass, Gabrielli says, is that you can see when someone you want to speak to is stopping by for a coffee, providing an opportunity to ambush them. “A lot of collaborations have sprung out of those encounters and lots of clinical connections have been established,” he says. “In a translational research institute, those are the most important connections and also the most exciting.”