A young San Francisco designer directs a diverse array of artists and makers to create an office of uncommon warmth and wit. 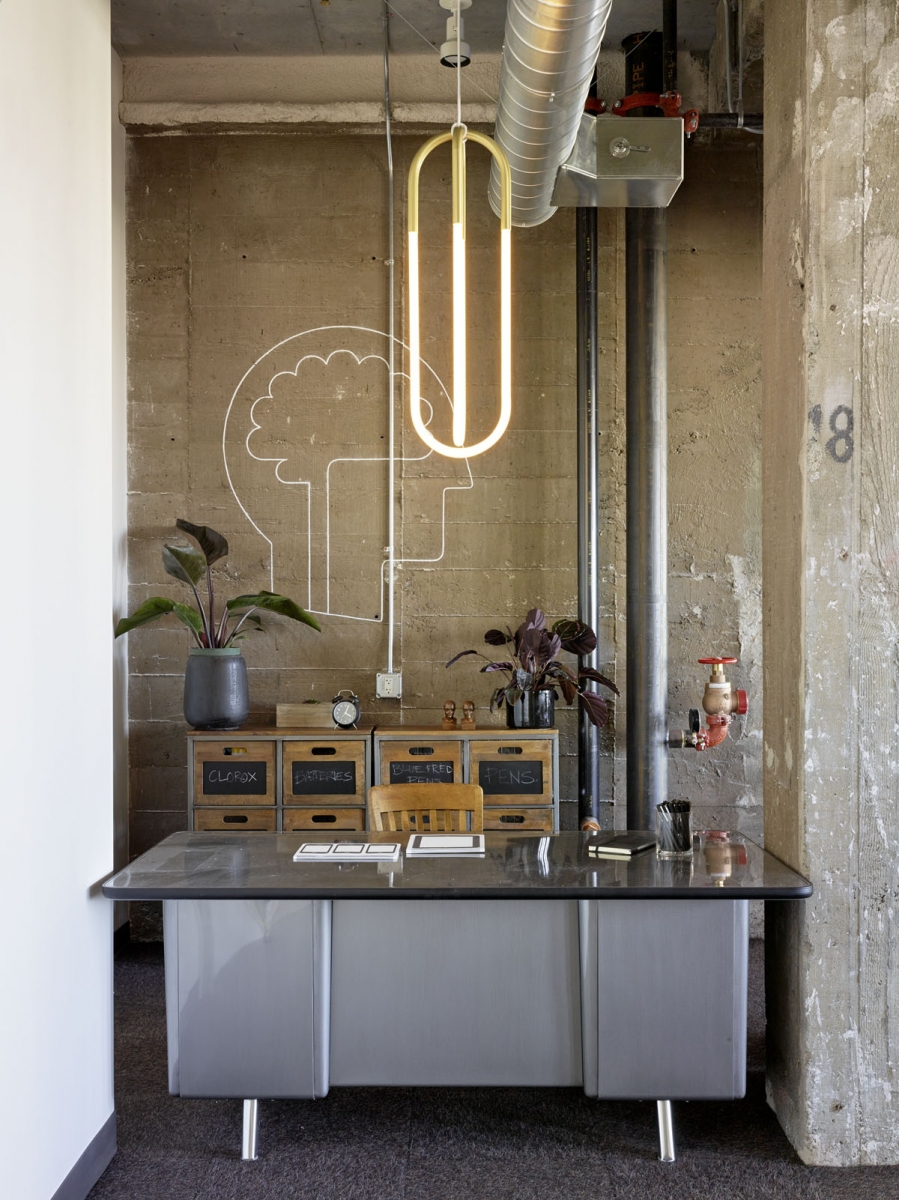 Lauren Geremia’s brain is working fine. The 32-year-old Oakland, California–based designer is fresh off a big project for Lumosity, the San Francisco–based brain-game company that’s been inserting itself into the space between neuroscience, technology, and games with its memory-, attention-, and association-focused app. It’s a project that could have been a challenge, in the tricky combination of analog materiality and puzzle-centered design that Lumosity was looking for, but Geremia was ready for it. She’s designed a few tech companies, after all, and she didn’t do it alone.

The offices are on the 17th, 18th, and 19th floors of a 1920s office building, recently LEED-renovated by Perkins+Will, and currently home to a roster of San Francisco’s most successful tech companies (Yelp is the anchor tenant). Lumosity approached Geremia because of its familiarity with some of her earlier work—she’d done bars, coffee shops, residences, and offices for tech firms like Dropbox and Instagram—and because the company wanted someone it could work with. “We were drawn to Lauren because of her body of work and the feel of her designs,” says human resources director Missy Coyne, who worked closely with Geremia. “Then, in the course of interviewing her, it was clear that she was more collaborative than some of the other candidates we were interviewing.”

Geremia created a design area furnished with round tables with little pockets filled with pens, markers, and art supplies—materials unusual for a tech company.

It’s one thing to be collaborative with the client, and most firms do tend to work—or at least talk about working—well with clients. It’s another thing to fully deploy a deep understanding of a vast network of other people’s skills and possibilities. “I know I have all these people who can play all these notes,” says the designer, who sees herself as a conductor working with an ever-changing band of players. “I make the proportions, and pull back or pull forward.” For Lumosity, Geremia knew she needed a composition of design music that was both totally harmonic—people, around 120 of them, would work here, after all—and utterly surprising. “They value design, they like drawings, and they have a lot of rituals,” she says.

To that end, Geremia created a design area furnished with round tables with little pockets filled with pens, markers, and art supplies—materials unusual for a tech company, but not surprising for a place like Lumosity. “They’re a little bit more analog than other companies,” Geremia says, citing processes like weekly design pinups or the fact that many of the designers still draw on paper. She worked (and played) with this ethos by using a lot of physical and direct references to gaming and puzzles—two of the brain-improving methods the company has developed and turned into apps that, it says, not only improve general brain capacity but also reduce the devastating effects of Alzheimer’s.

The “hidden library” is a refuge from the bustle of the office. This door swings shut to show a blank wall, or opens to reveal a book-lined space. The library features a built-in tile “rug” made from Heath Ceramics tiles.

San Francisco architecture firm Boor Bridges provided the shell and the framework for Geremia’s team’s interior design. Because of budgetary constraints, the architects decided to focus the majority of their design efforts on the 19th floor, concentrating desk intensive work space on the lower two floors. “Seventeen and eighteen are about getting work done and being productive,” Sarah Fucinaro of Boor Bridges says. “The public, fun play space is on nineteen.” That’s where the lunchroom is, and that game area, and the bar—yes, there’s a bar in the office because happy hour is important to the company, and that kind of mixing and blending of home, work, and fun is becoming almost de rigueur for tech companies in this particular boom era.

The library, nestled into a pocket of the 19th floor, is a puzzle in and of itself, hidden behind a swinging door that’s a blank wall on one side and filled with books on the other. It works  as a visual representation of the level of intellectual work and interaction going on both within the company and outside—thinking is what it, on a basic level, is selling—as well as practically. “In our games, we use textures that you’d see in real life, and we take sound samples from things that are very familiar, so the same type of materials are used in both places,” says Erika Lutz, an art director. “It feels very immersive.” 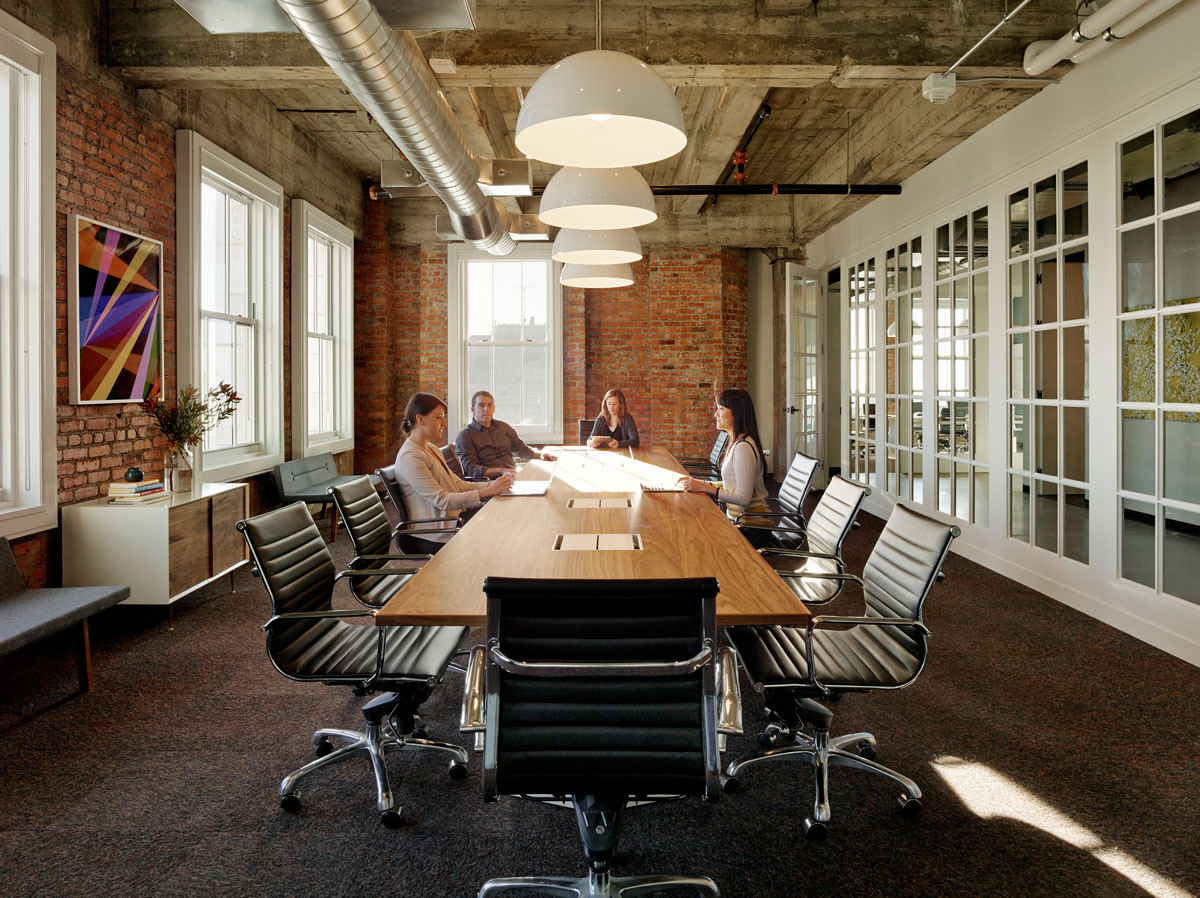 Where other designers might have specced the coolest chair, Geremia called Eric Pfeiffer, an Oakland-based designer, and asked him to do a massive 27-foot dining-room table, and a café chair and tables from scratch. Pfeiffer doesn’t normally work like this; his firm tends to contract with larger manufacturing companies. But something about Geremia convinced him to take on this seemingly insane project: design, prototype, production, all in six months. “We were speaking the same material language,” Pfeiffer says of collaborating with Geremia, a process that started and ended with his team moving incredibly quickly and coming up with fast, totally one-off solutions. “There’s a certain sameness and repetition in these things,” he says in reference to the majority of tech-office designs. “But putting a chair that has a huge impact in a café or an office and making a statement with it, coupled with everything else that we’re doing, created a different identity for Lumosity.” 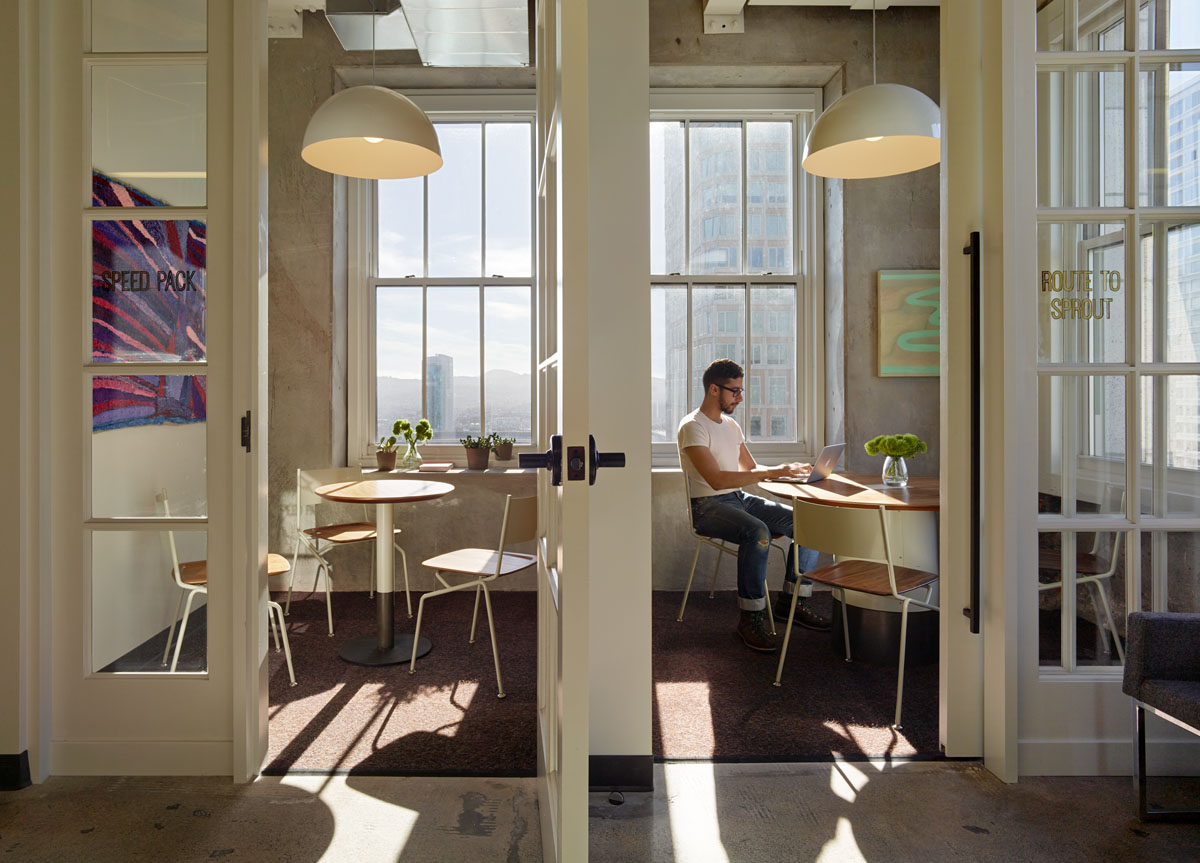 Small conference rooms provide employees with private spaces to hold intimate meetings or conduct phone calls. Geremia custom designed the chairs and tables in collaboration with Pfeiffer. Gold-leaf signage by New Bohemian displays the name of the conference room. All of Lumosity’s conference rooms are named for its brain games.

There were so many collaborators for this project that Geremia doesn’t know offhand the number, but estimates that there were at least a dozen separate ones just for lighting. Dylan Davis and Jean Lee of the Seattle-based Ladies & Gentlemen Studio provided the Aura pendant that hangs over the bar area, and the installation of that object far exceeded a simple contract purchase. First, Geremia painted part of the two-part circular lamp so that the ring just looked like a halo; second, she installed the lamp in a way the designers had never thought of. “It’s a field of forty-five of these fixtures arranged on a grid, like a constellation,” Davis says. Until Geremia came up with that, Davis and Lee had typically presented the product in small clusters of three to five. “It was interesting how they used it in a space with not a lot of delineation between each room,” Davis says.

And that’s the heart of Geremia’s talent. The Rhode Island School of Design graduate is a consummate collector, and a curator—someone who sees skills and talents in others that they might not be able to see in themselves. Rosalie Wild, a ceramicist who now works for Heath Ceramics but who produced a series of votive candles for the Headland Center for the Arts with the designer, experienced the mix of support and vision that Geremia thrives on. “Lauren has a strong vision, but at the same time she’s flexible and open to other people’s palettes,” Wild says. Geremia is also able to see unusual connections, like the one she formed between Creative Growth Art Center—an Oakland-based nonprofit that promotes work done by artists suffering from mental illness—and Lumosity. It makes sense when Geremia does it—what could be a more appropriate way of showcasing the endless flexibility and mutability of the brain than to exhibit the beauty that can come out of even the most tormented minds? 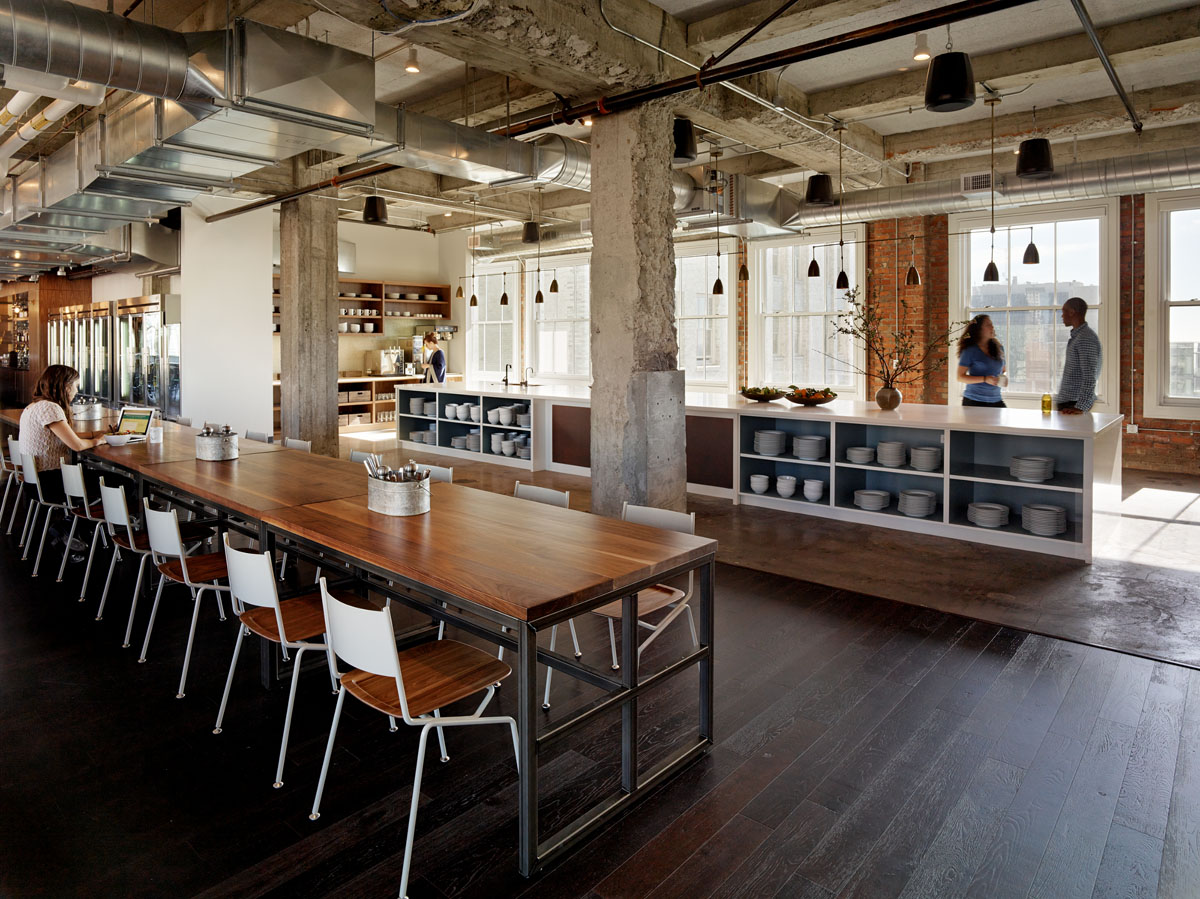 Lumosity requested an open kitchen and dining area where employees could congregate and enjoy meals together. Apparatus pendants hang above. The warm tones of the stained concrete floor complement the walnut and brass used throughout, providing contrast to the clean, white lines of the kitchen.

It’s that conductor role that she so easily occupies that is pushing her to the next level. She’s working on a ramen shop and a jewelry store, talking to tech companies in New York (one of which wants her to do a 100,000-square-foot space), and she really wants to do a hotel. “I like the idea of designing for how people connect socially in real space,” she says.

Doing a hotel would be a massive jump in scale—not to mention social focus—but she sees it as being not that different from her approach to an office, which requires a certain amount of thoughtful design intervention and a larger amount of repetition. “We have the structure and foundation to do bigger projects,” she says. “This model of finding the most creative people who have the same vision or connection to a project is workable on a very small or very large scale.”