Inside the Design Mind: Yang Yongliang

Art and architecture thrive on influence, an asset that knows no boundaries, geographic or disciplinary. It is in this spirit that we welcome new voices, perspectives and interpretations.  National Building Museum and Metropolis Magazine contributor, Andrew Caruso, begins the 2013 run of Inside the Design Mind with an emerging voice: Yang Yongliang.  At only 32, this Chinese born graphic designer-turned digital artist has come of age in one of the most pivotal (and controversial) times in his country’s history. His digital-collage reinterpretations of China’s cities present explorations of the built environment that are simultaneously critical and aspirational, dark and foreboding yet filled with light. Already showing in galleries from Shanghai to Paris, we think he’s one to watch.

Andrew Caruso: What parts of your childhood influenced the way you approach art?  Yang Yongliang: I grew up and learned about art in an old town that had retained its traditional Chinese character. My teacher made oil paintings and he taught me basic exercises in drawing and watercolor. I remember him telling me on his deathbed that he was thinking about painting. His manner and attitude toward art had a far-reaching influence on me and his death had a profound impact. 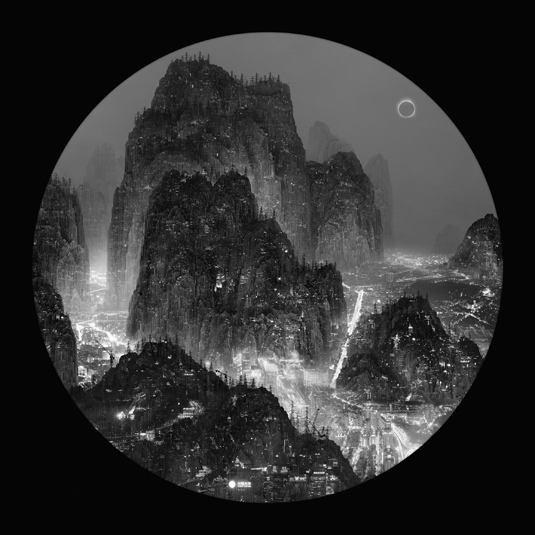 AC: You originally studied very traditional forms of art making. Why then did you begin your career with digital media? YY: My childhood education included traditional paintings and calligraphy and at university I learned graphic design. I began using different software programs and studied photography and shooting techniques. Combining these skills became natural.

AC: What’s the hardest part about combining digital and analog ideas?  YY: I think the more difficult part is that the form and the media are actually two systems, and it is not easy to combine these harmoniously. While I use the digital technology to create my work, I use it just as a tool. And, with technology’s progress, I believe it will continue to change.

AC: How do you approach creating your gigantic yet intricately detailed pieces? YY: First I sketch on paper. Then, I take lots of pictures from the city. I download the pictures onto my computer and use software to create landscapes. I think digital technology is only a method. It continues to change and develop, which is also one of its distinguishing features. I do not limit myself to using the same technology to complete my work, but rather, I explore the most state-of-the-art technology to realize my work. It’s difficult for me to calculate the time it takes to produce a piece because the photos are collected at different times and places. It’s a very easy technique, but it takes a long time. 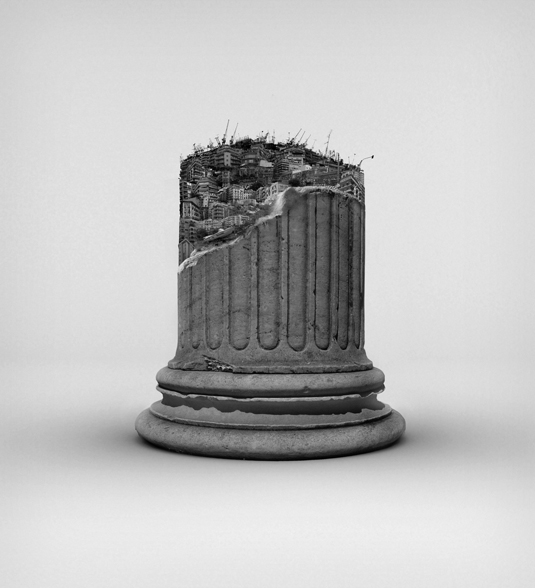 AC: What do you look for when you’re photographing the city and what have you observed of China’s urban transformation? YY: I want to show all kinds of places in the city. Some are very rich in detail and some are simpler. It makes the picture complex. The changes in Shanghai are quite amazing. With the fast development comes expansion of the population, damage to the environment, lack of the historical culture. I originally chose Shanghai as a subject, because it’s the city I know, but a lot of my pieces have been included elements from many cities, even foreign cities. My work reflects a common idea, so I don’t want it to be strongly territorial.

AC: What drew you to using collage as a method? YY: In traditional Chinese paintings you can see a very similar effect. Although elements are repeated, they combine to create a very complete work. My work is very similar; I combine pieces to form an original picture. The creative goal is similar. Yet, collage is just a form. I don’t want it to become a fixed representation of my work. Based on the needs of each piece, I work to find its own suitable form of expression. 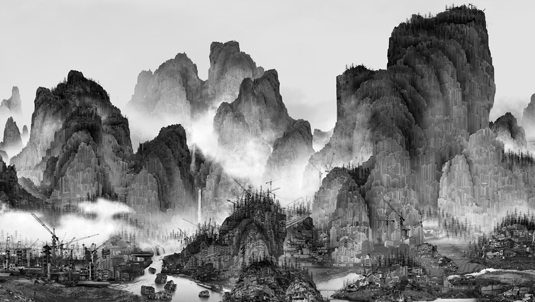 AC: In your earliest work, there are no human figures, just the detritus of man. In your later video-based series, human figures begin to emerge only as anonymous scale figures. Finally, the Peach Blossom series is focused significantly on the human figure. Have you purposefully made this change over time? YY: As an artist, I think it’s natural to change direction. In my photographs made in 2011, I started exploring the expression techniques of film. I would love to direct a film or an art movie, and I think it should be the exploration for my future works to capture the fusion of surrealism and realism.

AC: The concept of expressing time is a driving factor for your interest in film. In fact you argue that time within art is one of the key distinguishing factors between cultures. How have you explored the concept of time in your work? YY: The fundamental difference may be based on the Chinese idea that time is eternal, as opposed to the European emphasis on the brevity of a moment. In traditional Chinese paintings the sun is often not depicted, and the origin of the light source remains unclear, leaving the viewer to guess the time of day the paining is depicting. On the other hand, in Western classical paintings, specificity of light (origin, direction, orientation) is very important. I won’t let time be recognized in my works. For example, I prefer to shoot photos on a cloudy day, making my work seem to have the feeling of an eternal quiet.

AC: You intricately weave worlds of reality and constructed absurdity (fantasy). Visual clues and representational objects suggest the uneasy way these two worlds collide in your work, with viewers searching them as if reading a map. Why have you chosen to engage the viewer in this way? YY: Because I am very complicated. My character can be divided in two parts, like Beethoven’s Moonlight Sonata [sic]. This piece of music has both a passionate and a peaceful side. I think I’m very similar. I like fantasy and passionate things as well as very peaceful and logical things. You can see that all of my works also have two sides: peace and danger, tradition and modernity, all combined. I think my works are trying to express a great deal of information to the audience, but I don’t want everyone to understand my work in the same way I understand it. I want the viewer to interpret it in his or her own way. I think good artists should be inspiring and sensitive, rather than imposing their own concepts on an audience. 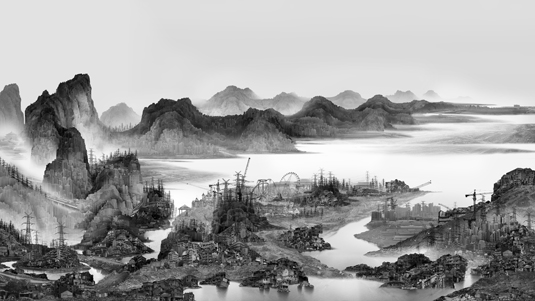 AC: Do you represent a new perspective in China?  YY: I don’t think so, because in our generation every artist is different. Artists from the last generation all have similar backgrounds. In our generation, not one artist can represent this age. To explore art in my generation, in terms of direction, it has more freedom and independence. It is very different from previous generation in terms of concentrated expression of ideology.

AC: You came of age amidst striking and turbulent change in China. How did that impact your art?  YY: On one hand, I think it had a significant influence on my art. On the other hand, I don’t think I revealed in my works some of the emotions that I felt. I always pursue complex emotions in my work, the juxtaposition of contradiction and calm. It’s difficult for me to describe how to show them in the future, but I will try to use different media to express them more thoroughly.

AC: What do you hope your art accomplishes? Why do you create this artwork?  YY: Although in China there are different lifestyles that an artist may pursue, I have a very normal life. I seek tranquility and comfort. I am satisfied with simply being able to do what I want to do. My works originally aspired to express very strong ideas and opinions. As my art entered a more mature stage, I slowly realized that a work of art is a reflection of oneself and that there is no need to emphasize my own opinion. The greatest kind of art can tolerate anything and not be constrained by clichés. I think the artist is too weak to hope to change the world in an instant. I just use art to express my emotions. Art is a mirror and should reflect your heart.

Translation by Michelle Ni Special thanks to Gallery Magda Danysz Read more Inside the Design Mind posts. Andrew Caruso , AIA, NCARB, LEED AP BD+C, CDT, publishes and speaks internationally on issues of talent within the creative industries. His latest column, “Inside the Design Mind,” explores the motivations of today’s design icons and influencers, surfacing key elements of their identity and examining their agency within the community of practice. Andrew can be reached at: inquiries[at]andrewcaruso[dot]com. About Inside the Design Mind The National Building Museum in Washington, D.C. tells the stories of architecture, engineering, and design. The Museum’s Spotlight on Design lectures feature architects and designers of distinction from around the world. Inside the Design Mind is presented in partnership with Metropolis Magazine. This post is a part of the Inside the Design Mind series.