All too often, in our tech-savvy world our lives are made more complex, not easier as we’ve been lead to believe, by the plethora of software on our computers, tablets, handheld devices, devices in our cars, among other things we cannot seem to live without. The MIT Media Lab is determined to help. They want […]

All too often, in our tech-savvy world our lives are made more complex, not easier as we’ve been lead to believe, by the plethora of software on our computers, tablets, handheld devices, devices in our cars, among other things we cannot seem to live without. The MIT Media Lab is determined to help. They want to improve our lives—with technology. The Information Ecology research group’s goal is to discover “ways to connect our physical environments with information resources. Through the use of low-cost, ubiquitous technologies [italics mine] such as sensors and consumer electronics, we are creating seamless and pervasive ways to interact with our information—and with each other.”

What’s more, the Information Ecology research group’s projects will not require extensive technical knowledge from users. Instead, they emphasize intensive, front-end research that produces simple, “user-friendly” protocols, devices, and systems. These are designed to improve the lives of not just those who can afford expensive gadgets, but others as well. The projects focus on technology that interfaces with humans to create and perform many practical tasks. The interfaces are easy to use and deploy ubiquitous technologies that are low-cost, thus accessible to people around the world:

Konbit is a hosting site and clearinghouse to connect those caught in disaster zones with each other. By “indexing the skillsets of local residents, [and] allowing NGOs to find and employ them, [residents], their diaspora, and the international community can volunteer their skills via phone, SMS, or Web,” promise the researchers. “Skills can then be searched in real time and location by NGOs such as the American Red Cross and Partners-in-Health. Konbit is language and medium neutral, where Kreyol voice and text messages may be translated into other languages through the Konbit phone, text, or Web interface.”

The applicability as well as practicality of this technology is clear. This year alone we have witnessed numerous disasters across the world from blizzards, hurricanes, and drought to earthquakes, tsunamis, and flooding, ranging in location from South Asia, East Asia, to Western Europe, and North America. What’s more, official state responses have been variously slow and ineffective, depending upon the governmental bodies involved; the NGOs are equally slow and often ineffective. Coordinating skills and services would be invaluable in such situations.

Then there are projects that involve expanding the 3D printer’s uses beyond the costly or highly conceptual projects. In line with some young tinkerers in places like Brooklyn, the MIT Media Lab Home Fabratory is developing 3D printer technology for general use. The research group has created several different versions of a “home” 3D printer, each at $100. These inexpensive and accessible printer renditions’ interface is designed for the average home computer. Such “new capabilities have far-reaching implications for personalization of products, direct-to-consumer production, and the creation of ‘information objects,’” states the website.

There is still the issue of the cost of materials used by the printer. However the proliferation of cheaper technology will eventually be accompanied by cheaper printer materials. And hopefully the technology will help people make things that are necessities, not just gadgets. 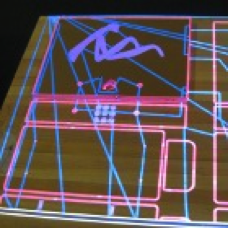 Make.Preview also focuses on the practical uses of 3D printing, adding 3D capabilities to both fabrication machines and 3D printers. Most significantly, users are offered a “print preview” of their projects before they actually make them. When combined with the Home Fabratory, this enhanced feature would save time and money for a currently costly process that is also resource intensive.