Letter from Baltimore: A Public Space

It begins with six photographs. Paul Druecke asks six people to snap photos of the same urban public space. Those individuals then invite one person to do the same, and so on until 24 people have photographed the setting.

The Milwaukee-based artist began his project, A Public Space, in 2003, while living in Chicago. “Going into it, it was very experiential,” Druecke says. “I like to do a lot of walking and am fascinated with public spaces and the sense of self in relationship to the city. I wanted to create a system that gets other people to experience the place as well.”

As with many of Druecke’s projects, A Public Space has a formulaic strategy coupled with an idiosyncratic component. Druecke picks a public space (in Chicago it was Daley Plaza) and invites those six individuals to go and experience the space. When selecting the initial participants, he curates a diverse group from a cross-section of socioeconomic backgrounds and professions. From there, he has no control over the subsequent participants. They are all instructed to take photographs and to select just one to submit for an exhibition. Druecke insists that they edit their own work. “There’s often a lot of back and forth on that,” he says. “They want me to select their photo, but I tell them that they have to make the choice.” The images are then enlarged and mounted for an exhibition.

In addition to Chicago, Druecke has taken A Public Space to Houston and San Diego. The fourth city in the series is Baltimore. Last Friday night, Druecke installed the 24 photographs from the Baltimore series at an outdoor exhibition space during the city’s annual Artscape festival. A Public Space: Hopkins Square lined a wrought iron fence edging a bridge where thousands of festival-goers ambled by throughout the weekend. As Druecke put the finishing touches on the installation, people stopped and chatted about what they saw.  Most couldn’t immediately identify Hopkins Plaza, a concrete space located in the heart of downtown, but “something in the images seemed familiar to them,” Druecke says. 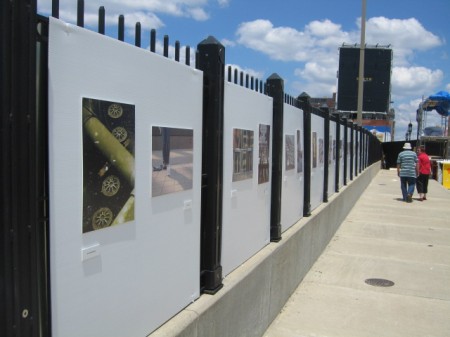 In addition to the photographs, Druecke enlists a local to write an essay about the space in question. The Baltimore artist Stephanie Barber contributed an essay for that city’s project. “The art is constructed through this fragmented game of telephone and is both rigid and fluid simultaneously,” she writes.

Rigid because Druecke has constructed the framework for the process; fluid because he has no control over what happens from there. He invited a local architect named Eric Leshinsky to participate. Leshinsky then invited a staff member from the American Visionary Art Museum, who in turn invited the executive director of the National Federation of the Blind. “It never would have occurred to me to invite a blind participant,” Druecke says.  “And I never would have had the local connections to make that happen.” 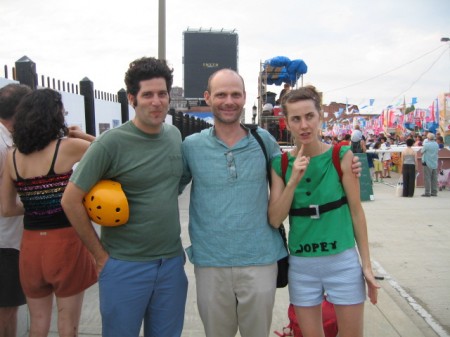 The result is an intriguing glimpse into the way individuals experience a public space. It is also an  unexpected and compelling source of critique on design. In Baltimore, Druecke noted that the individuals often zoomed in on a minor detail–the pattern of a light fixture, the PVC piping emerging from a water fountain, reflections in glass doors. There were very few landscape shots of the plaza as a whole. “People focused on patterning, and I think it’s because the space feels austere,” he says.

Druecke has one more city to go. The final installation in A Public Space will happen in Portland, Oregon, next year. 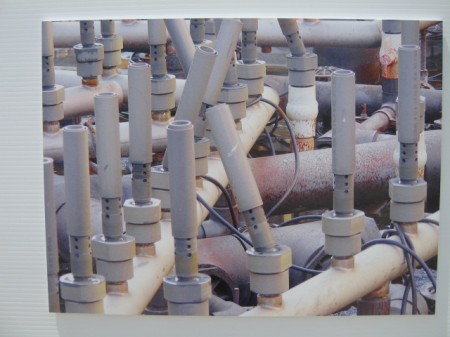 An image of PVC piping at Hopkins Square taken by Theresa Segreti, an employee at the American Visionary Art Museum