A look at four honorable mentions from the Living Cities competition

Metropolis launched the Living Cities competition last fall, prompting architects and students to conceive of design solutions for the coming urban influx and attendant housing crisis that will hit New York in future decades. The winners have been announced, and now we present the four runners-up that almost took home the top prize.

Asked to design residential towers in steel, these projects came a close second in addressing the threads of sustainability, flexibility, lifestyle amenities, and multigenerational design that the competition sought to highlight. 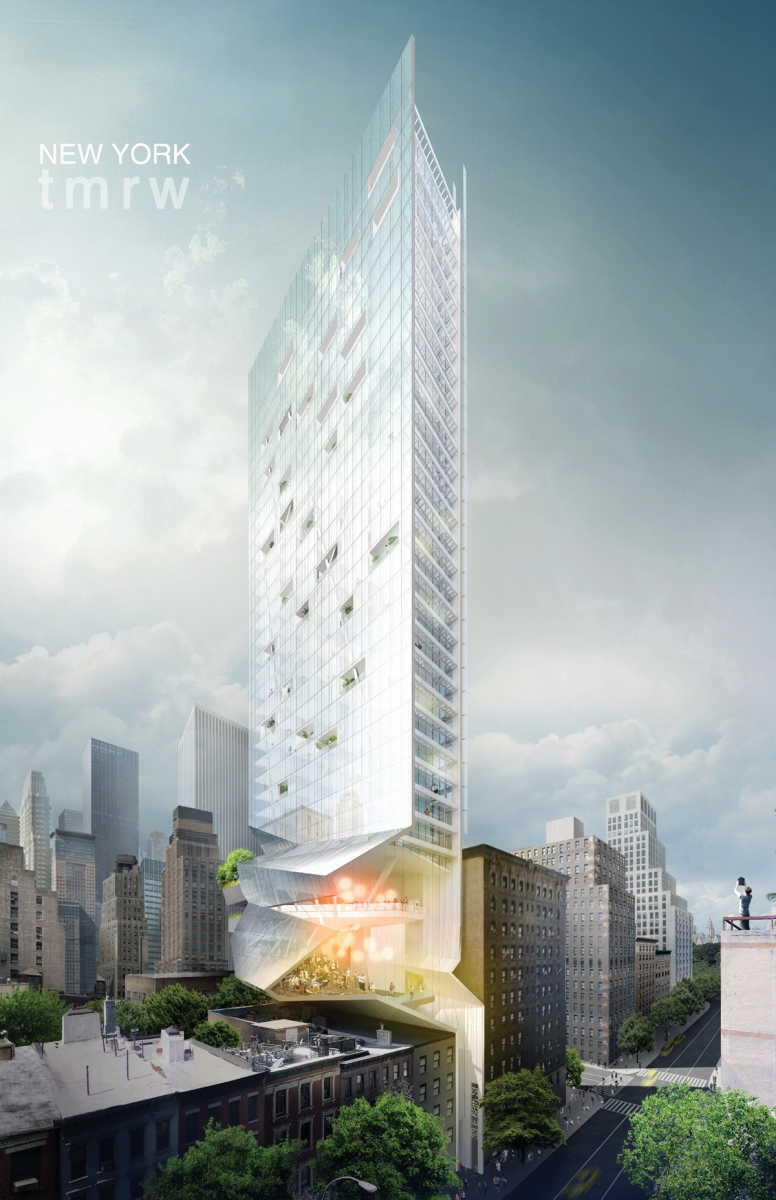 New York Tomorrow is a slender steel tower imagined for Midtown Manhattan. In contrast to the anonymity and isolation that housing towers tend to propagate, it discreetly adds to the neighborhood fabric—namely through the mid-level lobby, the design’s chief innovation. Working within the extreme spatial conditions of the site—18 feet by 70 feet—the team developed an intriguing structural solution. On the ground level the tower is supported by a series of mega columns, which then shift to a staggered truss system that spans the width of the tower. Shifting again, the structural members are straightened as the tower moves upward, conforming to the regular grid of the residencial units above. The design allows for the tower’s vast column-free community lobby, which cantilevers over a neighboring house. “The lobby opens to the city, which could be used as a co-working area, an auditorium, etc. It transforms the whole experience of being in a residential tower, fostering communal well-being,” explain the team members. 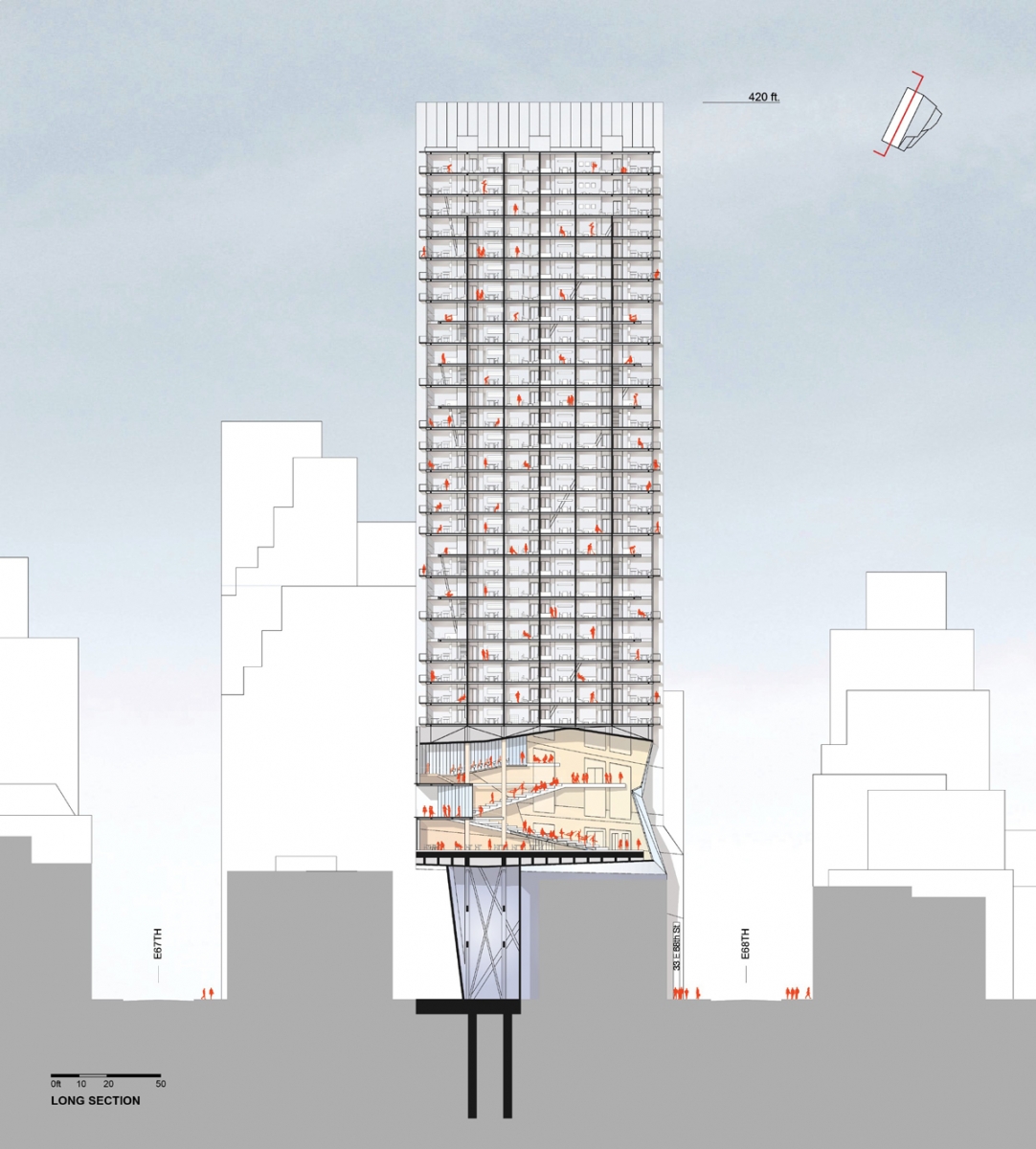 A section revealing the generous lobby space—to host activities, parties, and other events—and the regular grid of units above it 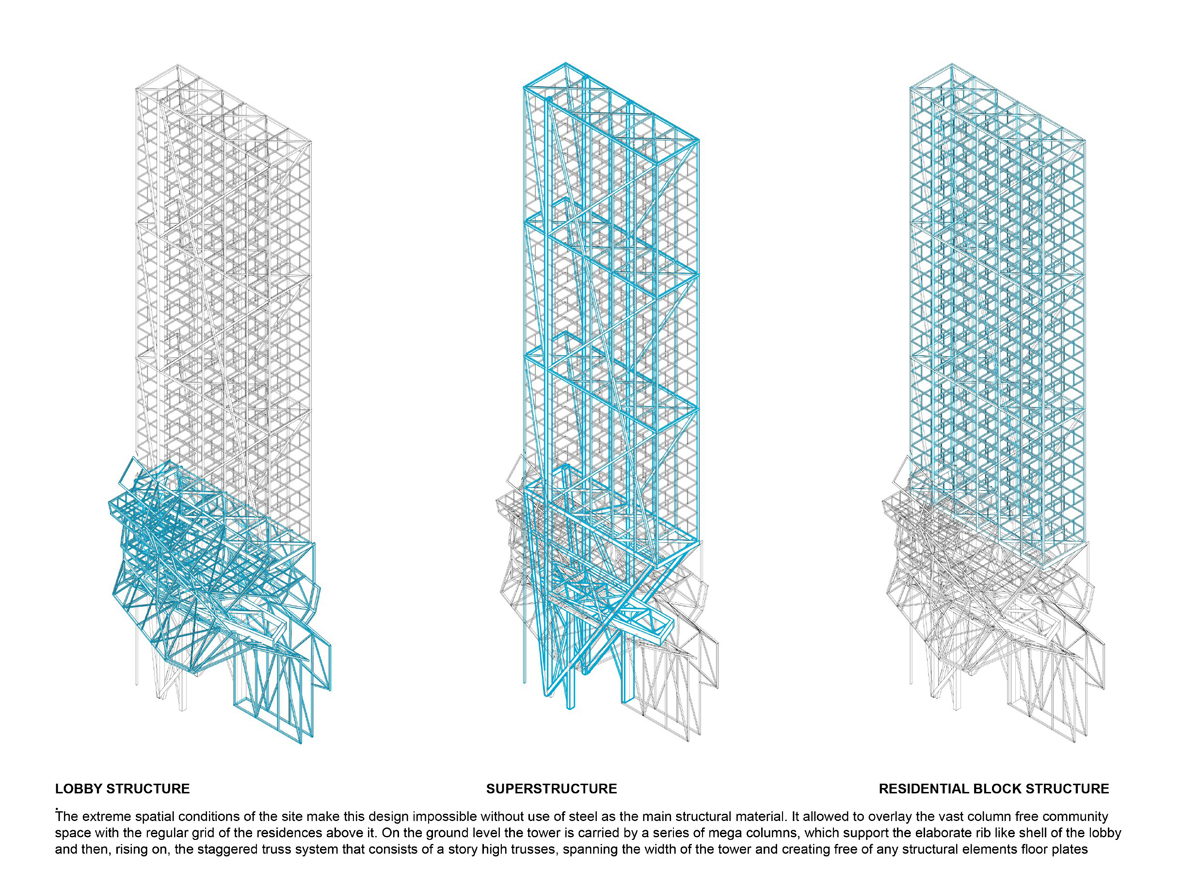 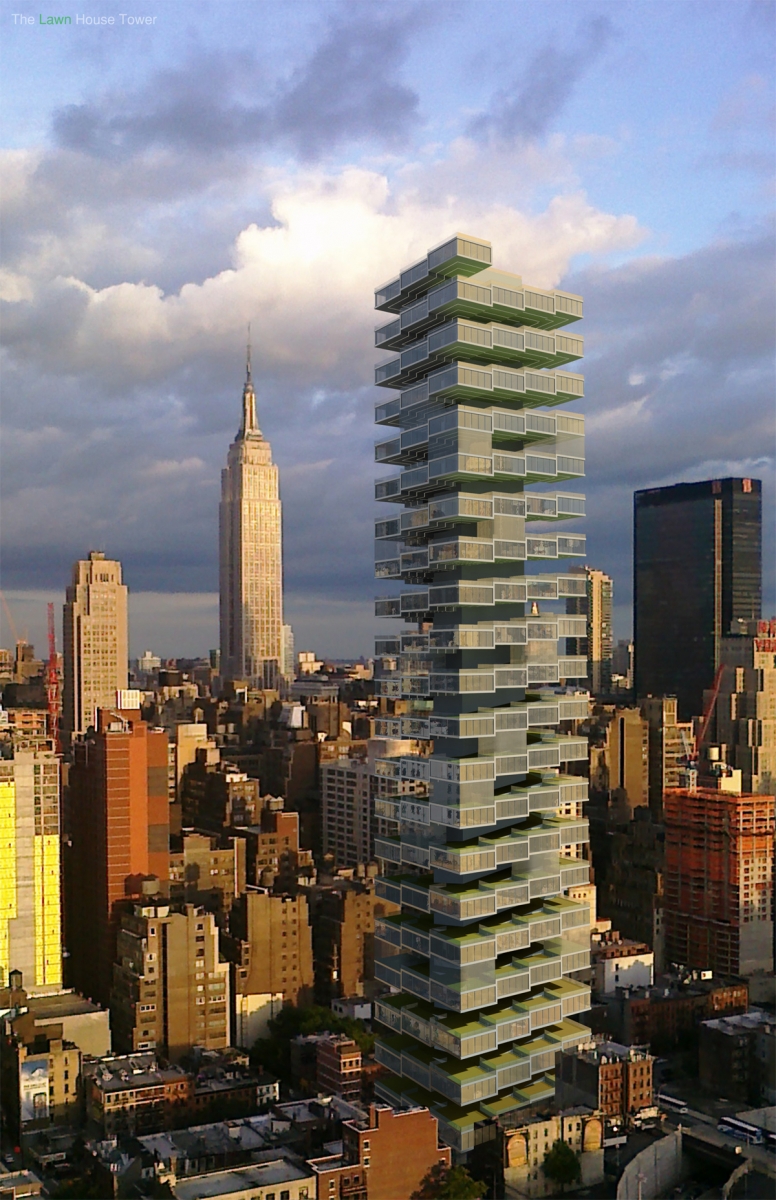 The Lawn House Tower incorporates the benefits of suburbia with the efficiencies of city living. Its design is a series of 200 family-oriented units with lawns, layered on top of each other to create a spiraling tower. These series of walkable green lawn roofs are thermally controlled, retain storm water, and are sound buffered from the above and below units. Temperature sensors are built in, which not only detect outdoor temperatures but also ambient indoor temperatures. The spiral form breaks prevailing wind, creating diffused wind passage between apartments and the lawns. Each individual unit can be fully pre-fabricated and assembled (and easily dismantled) on site. These and other features help in reducing the project’s carbon footprint. 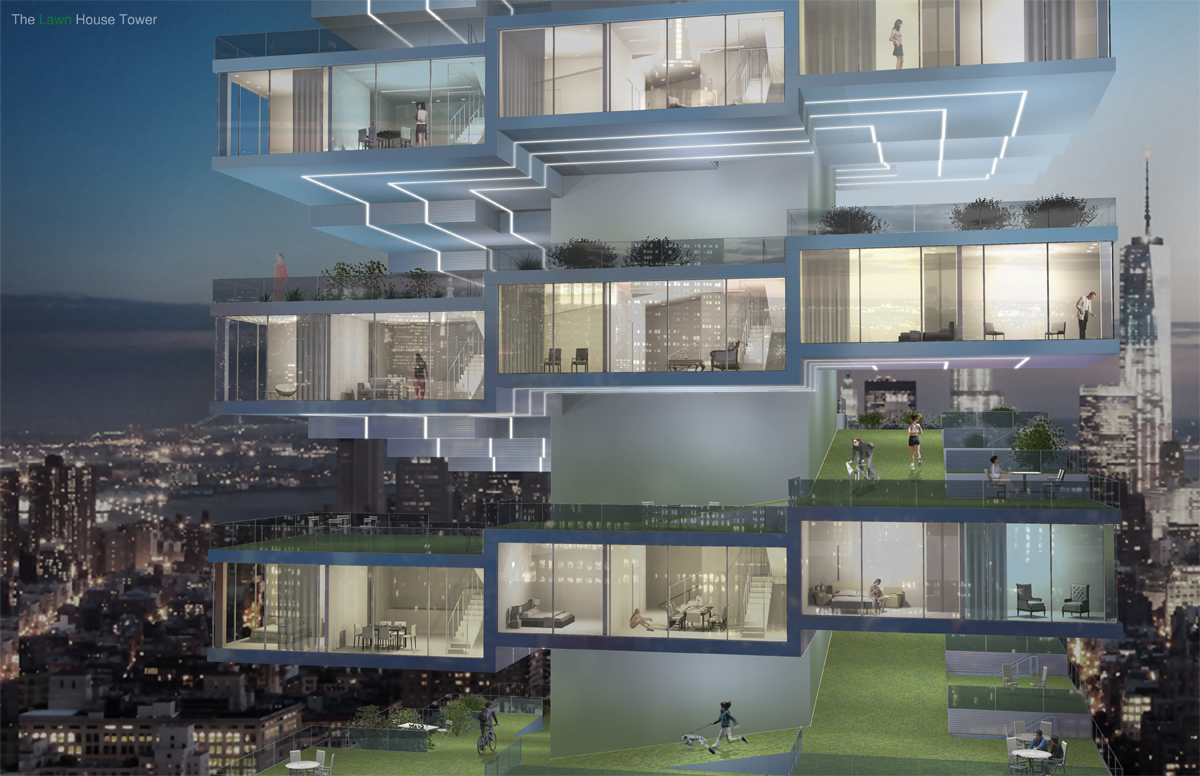 An airborne rendering of the tower, illustrating how the indoor and lawn spaces are elegantly intertwined 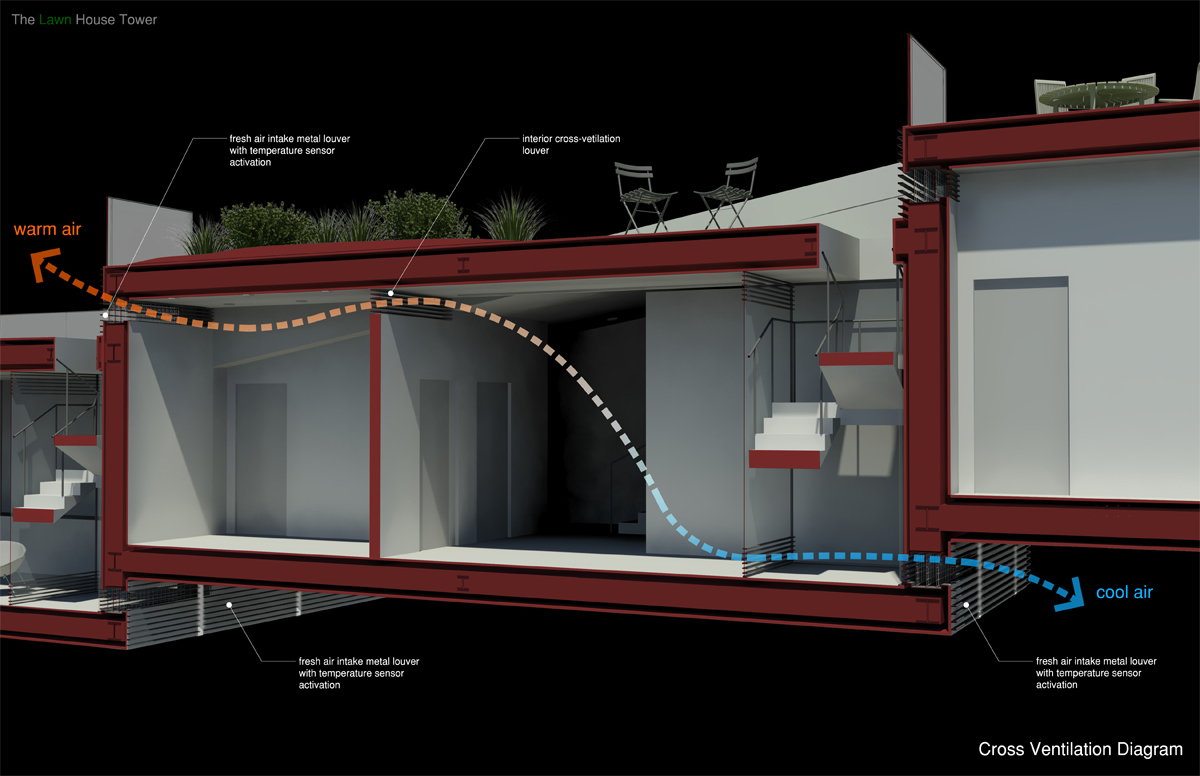 The stepped section of the units allows for easy cross ventilation within apartments. 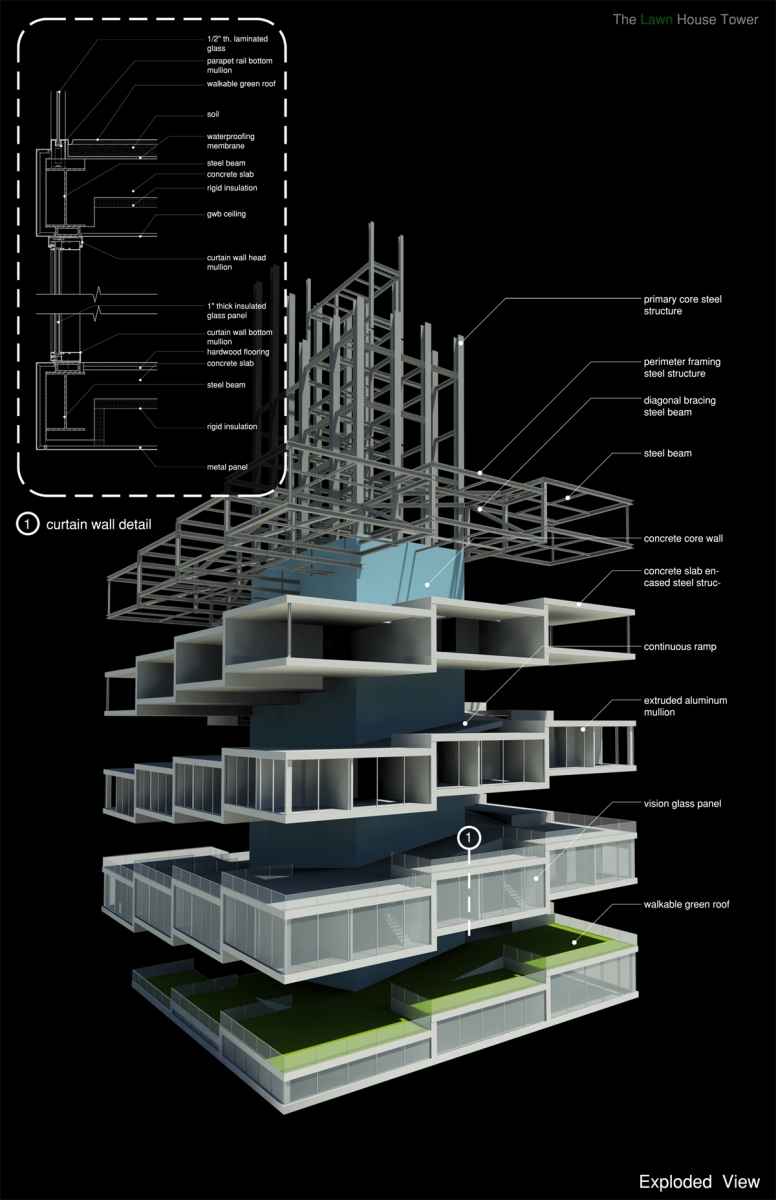 The cylindrical form of the 40-story tower reflects the dynamics of life of its inhabitants and its relationship with its environment. Sited in Brooklyn, the tower’s residential floors are punctuated by ground-, mid-, and upper-level commercial areas. The outer glass skin conceals three large volumes containing the tower’s programmatic spaces, which are sheathed in a second curtain wall. The “in-between” space resulting from the meeting of the two curtain walls creates singular communal zones dedicated to leisure uses, such as restaurants, gyms, and even a kindergarten. 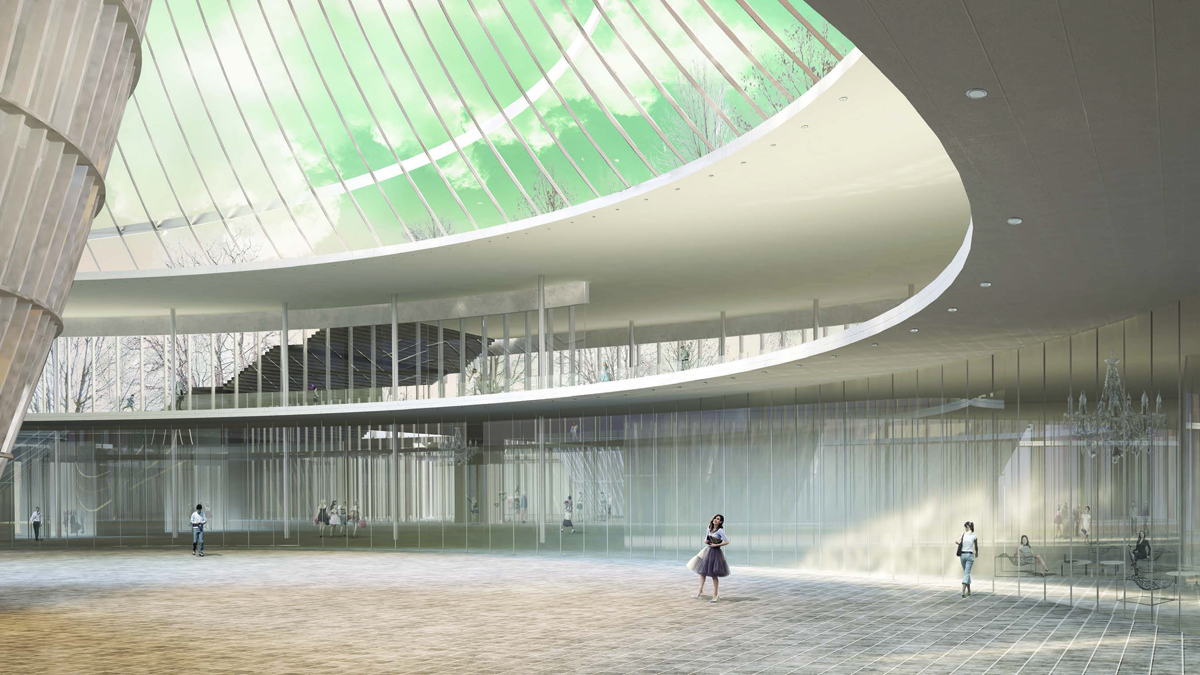 An example of an “in-between” public space formed by the outer and inner curtail walls. 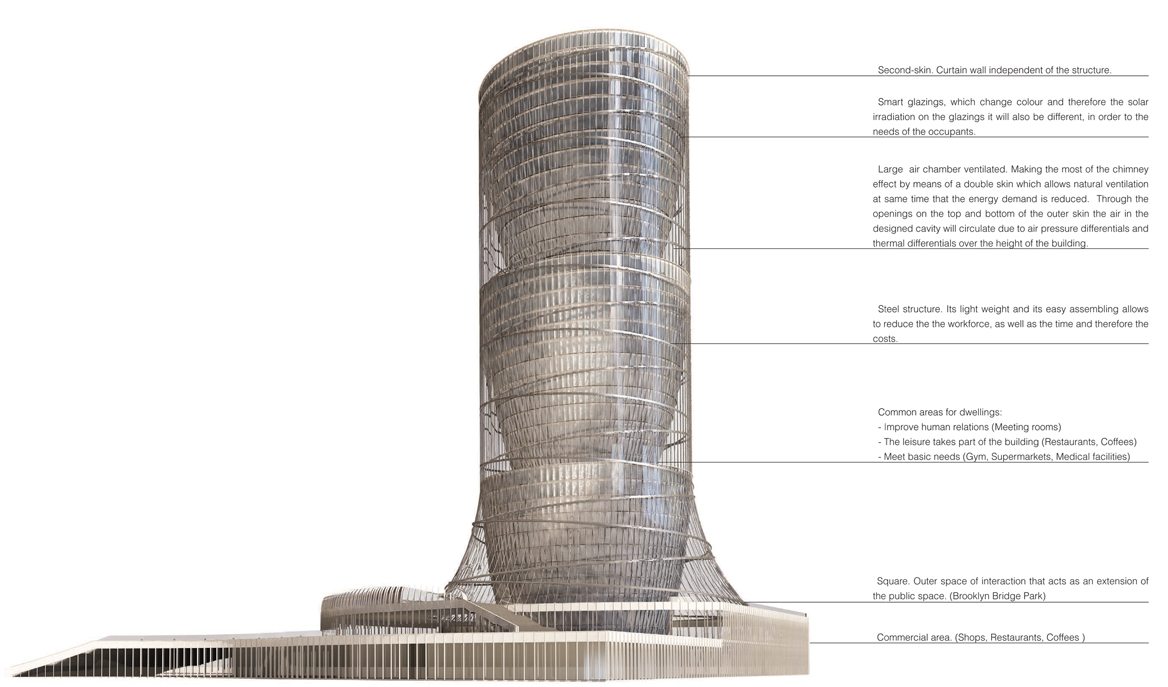 The outer curtain wall conceals three cup-like, glazed volumes that each contain a mix of residential units and commercial areas. 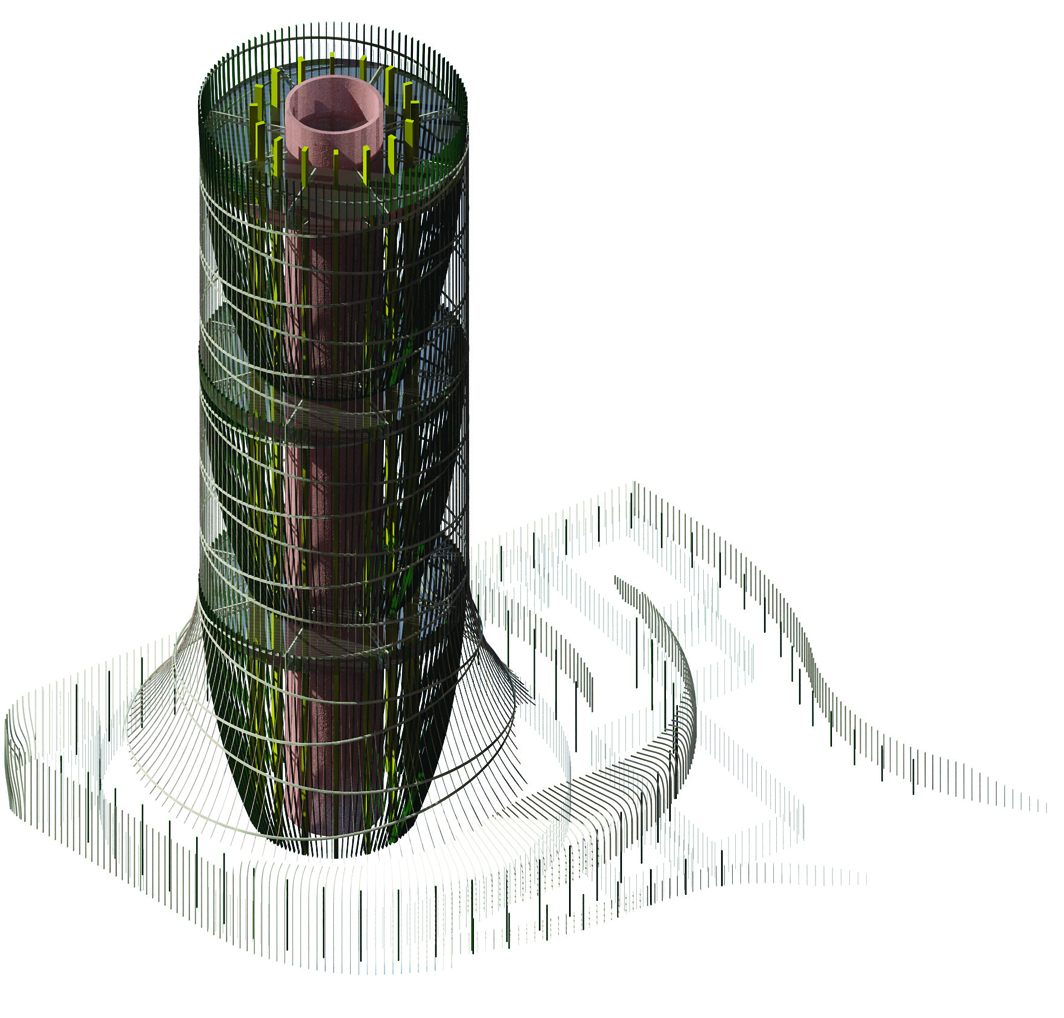 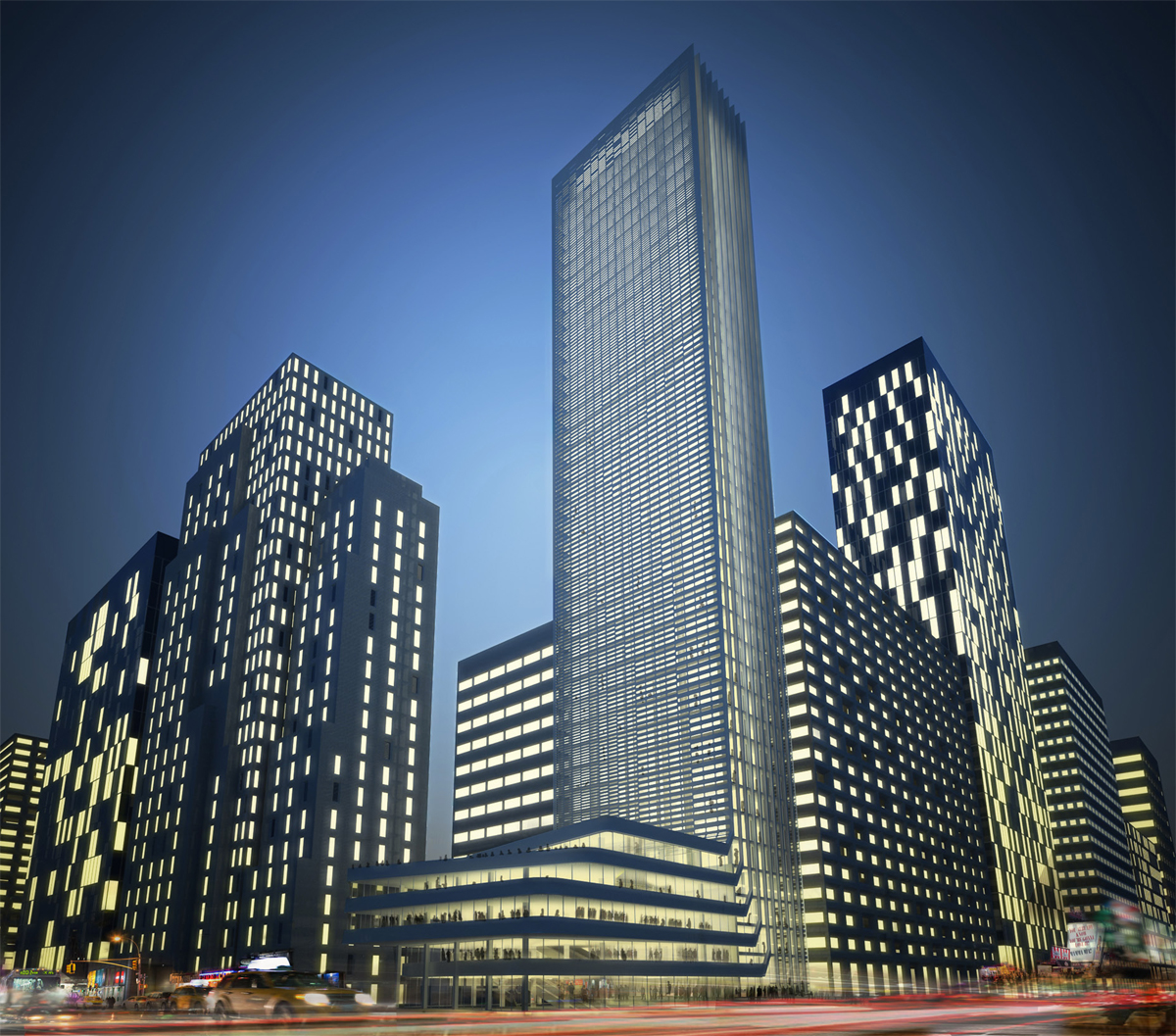 The Bios Tower attempts to address the future of the skyscraper, particularly its environmental and social aspects. The main façade is a performative skin that filters solar radiation, guaranteeing optimal exposition to daylight and reducing the wind load on the facades. Wind turbines on the rooftop contribute to the building’s energy needs. The building’s shape, meanwhile, is influenced by an important urban element: the grid. To accommodate diverse needs of occupants, the steel frame system allows for flexibility in the organization of the interior spaces, while also making possible different types of apartment units. The meeting places and opportunity for public or commercial services for tenants in the lower part of the building give back to the city’s social fabric. 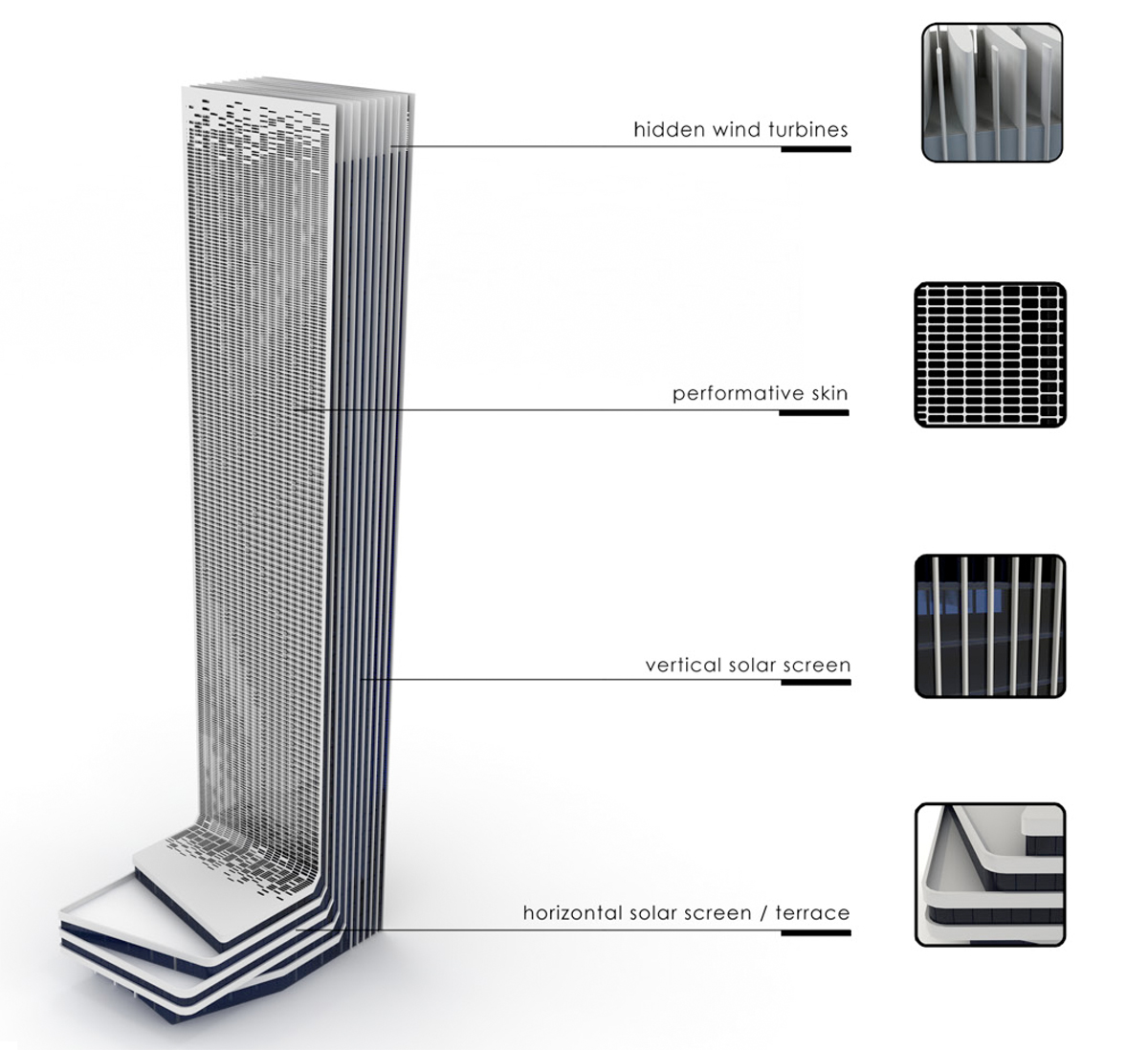 The skyscraper’s form, says its designers, “is the result of bioclimatic, social, and aesthetic considerations.” The sculptural plinth gives way to a more sober platonic form, faced on two sides by a performative skin. The narrow sides integrate wind turbines in their elevations. 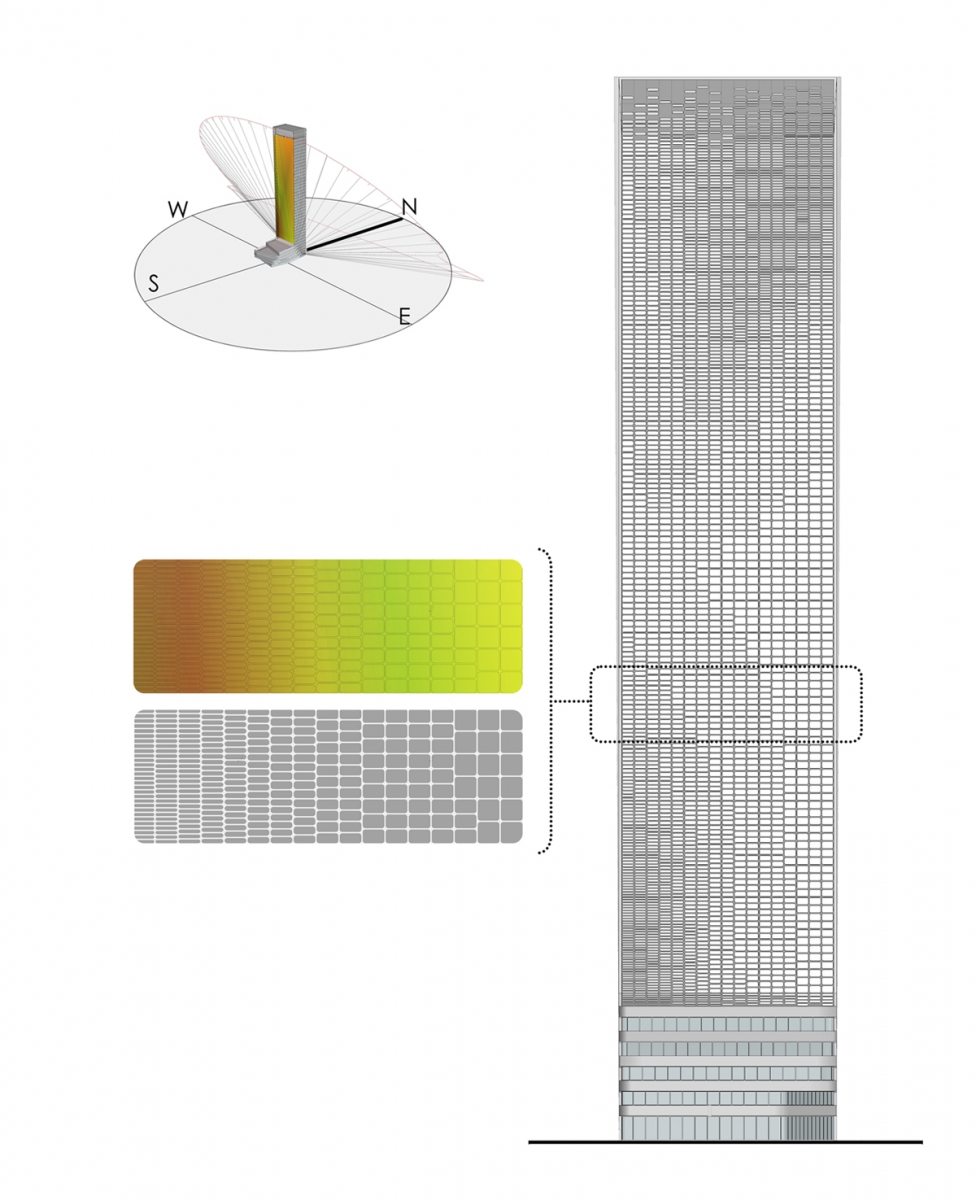 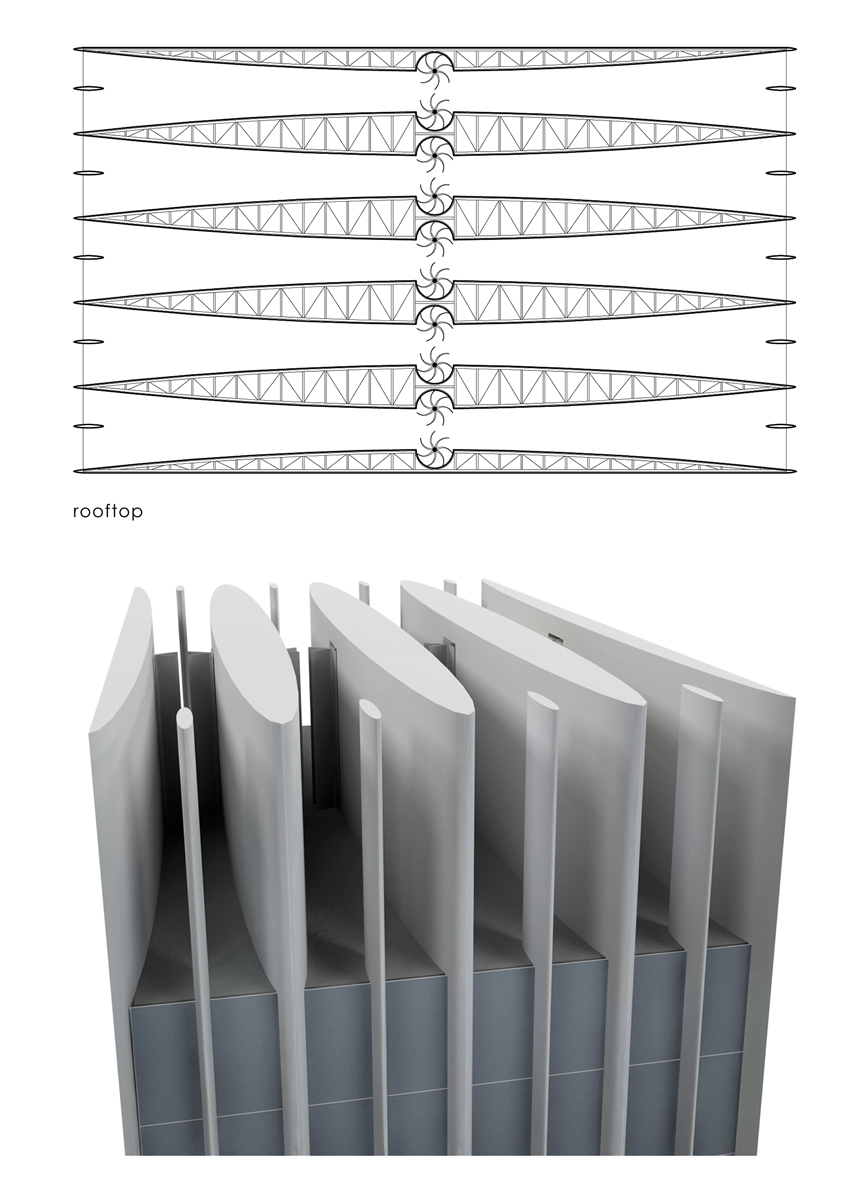 The wind turbines “hidden” at the top of the tower form help meet the building’s energy needs.