Courtesy Karl SchmeckMidterm reviews for the BIG/Durst studio have come and gone, and now we’re reflecting on the criticism and issues raised during the day. Our studio project focused on “social infrastructure” (a term employed by Bjarke Ingels), as it relates to the design of a habitable bridge. The primary investigation outlined by the studio […]

Midterm reviews for the BIG/Durst studio have come and gone, and now we’re reflecting on the criticism and issues raised during the day. Our studio project focused on “social infrastructure” (a term employed by Bjarke Ingels), as it relates to the design of a habitable bridge. The primary investigation outlined by the studio brief was to test how architects might be able to propose novel models of public/private partnership, such that a new transit bridge in New York could be funded in part by private development.

This challenge is compounded by the technical and structural considerations of bridge construction and maintenance, as well as the lifestyles and housing typologies that would be designed into the architecture. The project is a sort of Gordian Knot—it needs criticism and expertise from all manner of disciplines in order to untangle it. We were fortunate to have on our jury, in addition to our teachers architect Bjarke Ingels and developer Douglas Durst, Jerry van Eyck from !melk, Claire Weisz from WXY Studio, Paul Stoller from Atelier Ten, Craig Schwitter from Buro Happold, and Julia Watson from REDE, along with studio critics Thomas Christoffersen and Andrew Benner. 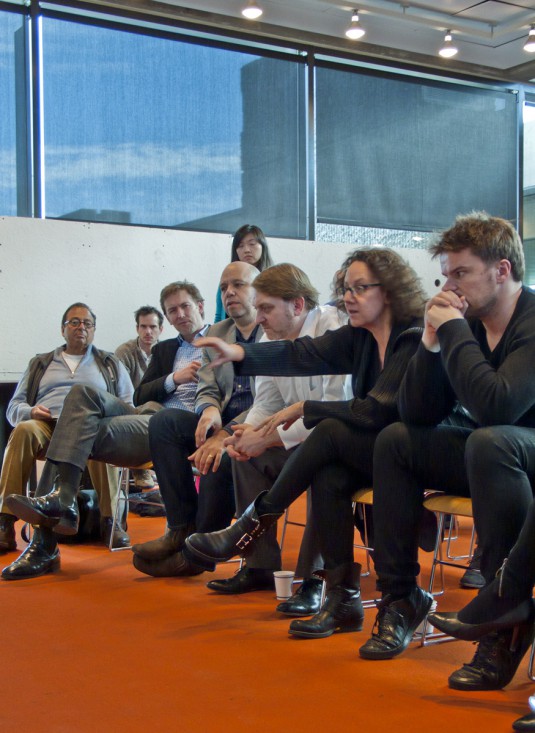 There were some commonalities in critics’ responses to our proposals. Foremost among these was the importance of having financial metrics to evaluate a project’s performance. We understood that the financial model for this sort of development is as important as having a successful architectural idea about how the bridge is inhabited. Coming up with a pro forma is just the beginning, though; due to the scale of the development and the construction period for large infrastructure projects, the element of time becomes a crucial consideration. That is to say, what would New York’s housing market look like in five years, maybe ten? Could the residential program be staged over an even longer time period? And  who would manage and maintain the project before it is sold?

Aside from questions of timing and financing, there are other unique problems posed by an inhabited bridge. Concerns about the traffic, for instance, both as a source of noise and vibration must be considered. In addition the design must account for the inherent sway or movement of the structure. Bridges also tend to have a near constant maintenance schedule, which necessitates a method of accruing income throughout the life of the project, not simply at the moment of sale. And then there is the problem of transportation on the bridge, itself, for the residents moving to and from their dwellings. These are just some of the issues the design teams are now grappling with in our studio.

Even if we assume a proper, compelling response to each of these problems, coupled with a financial model for income over the lifespan of the project and a pro forma that yields acceptable returns to all parties involved, there is another, intangible element to this kind of speculative real estate proposal: the potential appeal to buyers and its viability on the market. These are the unknown variables that developers try to maximize by providing ample amenities and a certain uniqueness to each project. But ultimately, the success of such an ambitious, large-scale development can’t be reduced to quantification. It takes the best intuition and experience of the developer, together with the most inspired vision of the architect, to make something truly extraordinary. This issue is at the heart of the BIG/Durst studio and it will occupy us in the coming weeks.

Karl Schmeck is a Master of Architecture candidate in his final semester at the Yale School of Architecture. He presently lives and works in New Haven, Connecticut.