The Mission District’s Zero Cottage Produces Its Own Energy

David Baker’s Zero Cottage is a passive house in a dense urban area. 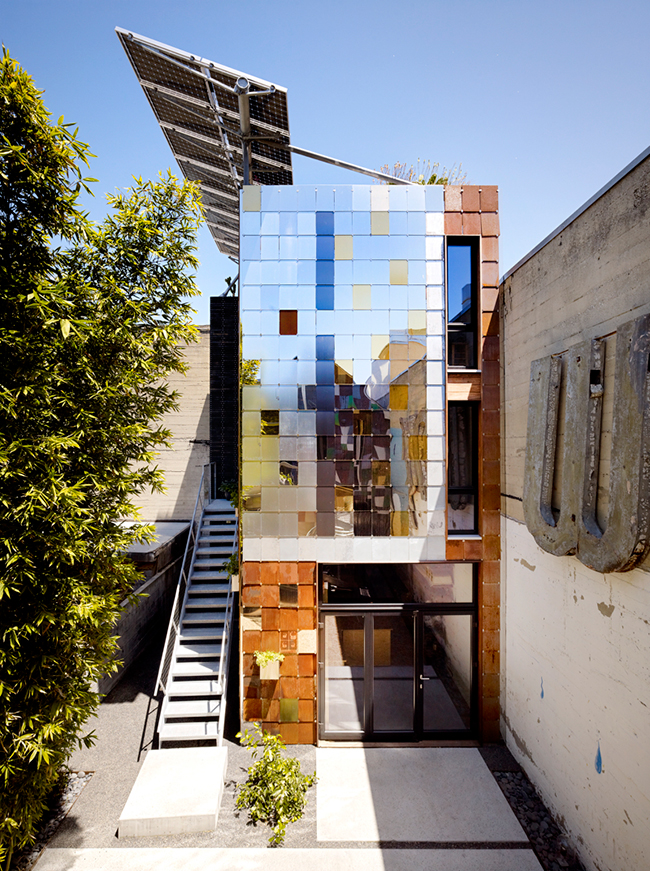 Built in place of a stable that stood in his compound, David Baker’s Zero Cottage, with a salvaged metal facade, generates its own solar energy.

Architect David Baker, unlike the cobbler whose children had no shoes, has been building for himself since 1999—he has kept the Shotwell Compound he lives in mostly under construction, until quite recently. It’s on a block in the northern section of San Francisco’s Mission District, a formerly rough neighborhood that is now a gentrifying, Tartine Bakery–supporting hipster haven where Facebook’s CEO, Mark Zuckerberg, purchased a home late last year. For Baker, it is a site for experimentation, play, and risk taking—all in the name of building just the right home for himself.

Zero Cottage, a certiﬁed passive house, is his latest and most ambitious project in the compound. To achieve the net-zero standard, “if you take the rigorous position, you produce as much energy on site as you use,” Baker says. Typically, architects aren’t so rigorous—as Baker explains, people get pretty close, then bump it up to perfect standard not through architecture, environmental engineering, or design, but instead by purchasing generation credits for the energy their buildings do require. Zero Cottage, on the other hand, actually produces its own energy. 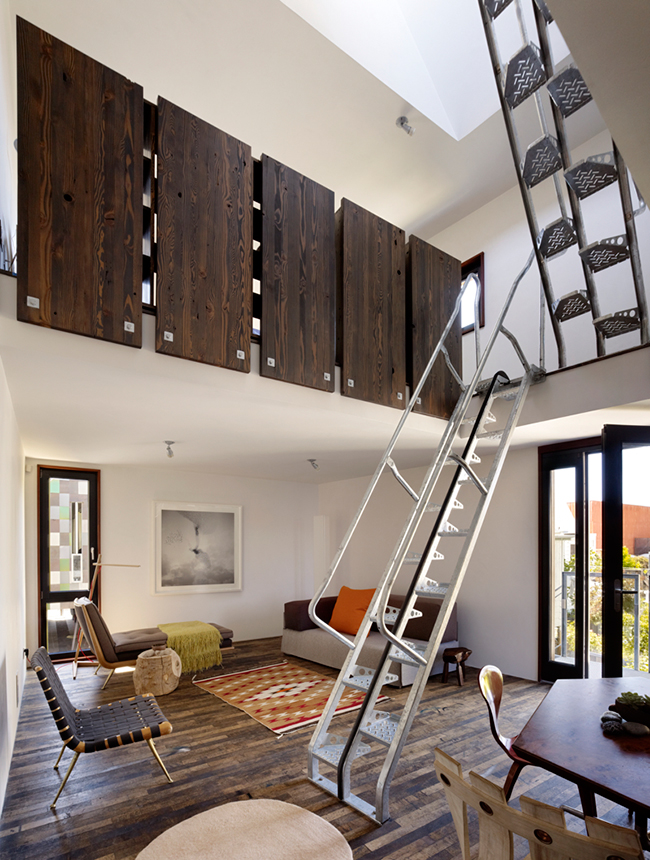 In keeping with the weathered aesthetic of the cottage, the living areas on the second floor—which include a kitchen and work space, as well as a comfortable, informal seating area—use a variety of reclaimed materials and vintage pieces. An unusual ladder, with split and staggered rungs, serves as a staircase to the levels above. The first floor is a woodshop that Baker uses for making models and furniture.

In 1999, Baker ﬁrst got a variance to build a cottage where there used to be an old stable, but let it expire. He renewed it and moved ahead with the project before the variance expired a second time. “The whole complex is really a design lab—it’s where I get to do things that you don’t get to do in big projects because they might fail,” he says. “I decided to see how far I could push energy efﬁciency, and right about then was when people started talking about passive housing.” There was a lot of general skepticism about the prospect of doing high-density urban buildings that could be net-zero.

It’s one thing to build a solar-paneled, green-roofed building supplied by rainwater and relying on open ventilation in the middle of a wide-open ﬁeld with full access to all of nature’s offerings, and quite another to do the same in a heavily populated, hyper-dense city. But Baker wanted to try. The structure combines tried-and-true strategies, like reusing wood from another project his ﬁrm had done in Oakland, with brand-new ideas like a rain screen made from movable tiles that clip into a curtain-wall structure and can be taken down, rearranged, or replaced with planters. That screen adds to the house’s most remarkable feature, which is its air- and temperature-control system. “It’s a super-insulated building and it basically doesn’t have heat,” Baker says, describing a heat-exchange air system and a recovery ventilator that extracts energy from, for instance, the heat produced when he or his partner, Yosh Asato, takes a hot shower. The ventilators aren’t currently used much in the United States, but Baker likes them for both the distance they take him toward net-zero and the healthfulness of the air they circulate. “You don’t get any mustiness because every part of the house is getting tempered—you get fresh air at this super-low volume.” 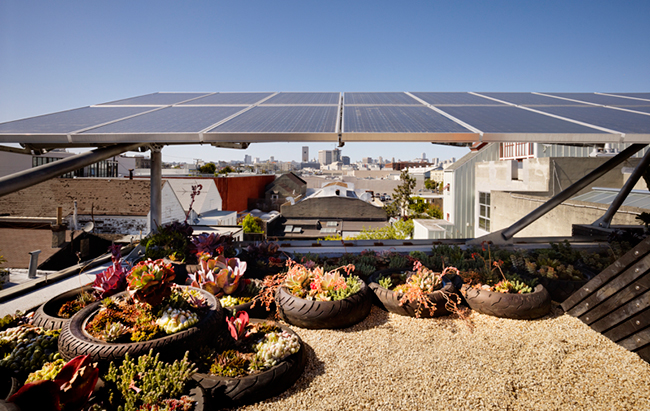 The cottage wouldn’t be as efﬁcient a building without a green roof, but Baker took a slightly different approach from the typical one. He points out that many green roofs  are actually energy losers once you factor in the plants raised in New Jersey and then shipped in from, say, warehouses in Chicago (an example he gives based on research into what’s typically used). His roof, ﬁlled with native and nonnative succulents tucked into repurposed scooter and motorcycle tires to control erosion, required no warehousing or air-freighting. These thoughtful tactics made all the difference in Baker’s breakthrough— if you want to build net-zero in a city, no detail is too trivial.