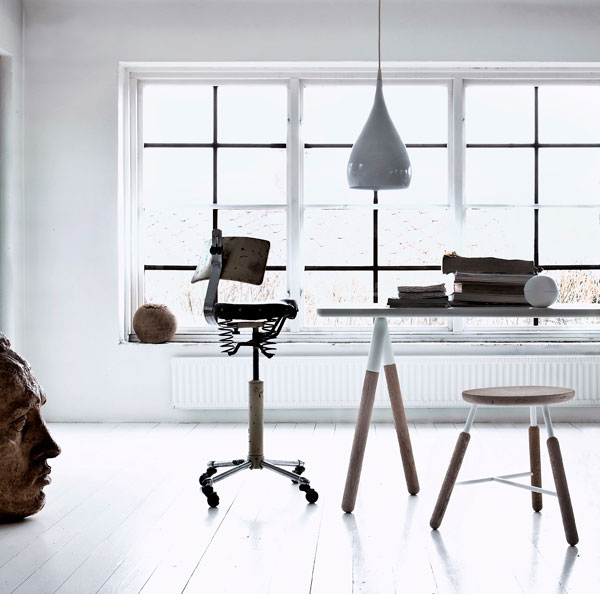 “The thing about Denmark,” says designer Jonas Bjerre-Poulsen, 37, “is that it’s always gray and rainy and cold.” That’s not entirely true, of course (Copenhagen’s winters are surprisingly mild), yet damp and dreary are a constant even in summer, and this, Bjerre-Poulsen contends, has been a prime factor in the development of his home country’s design culture. “People always stay inside and have guests come over, so the home is what’s important. For people with outdoor cultures”—think of the Italians or the Spaniards—“it’s all about your clothing, your car, your watch. Here it’s your home. People are obsessed with their furniture and lighting.”

Which is fine by him. Together with partner Kasper Rønn (also 37), Bjerre-Poulsen heads up Norm Architects, a five-year-old practice that’s quickly moving to the front of a very crowded pack. The national cult of design in Denmark, and more broadly in Scandinavia, can make it hard to stand out, and one may wonder if the world really needs another purveyor of understated Nordic elegance; yet Norm’s finely calibrated ambition, as well as its founding partners’ highly adaptable and resourceful approach, set it apart from some of their more staid contemporaries on the regional scene.

Like many of their compatriots, the two were brought up on the design traditions of their native land. “Everybody in Denmark knows the names of a few famous architects, and ten or twenty design classics of modern furniture,” Rønn says. He and Bjerre-Poulsen have been friends for more than two decades, having met in high school; a series of odd jobs—including positions in a home for the disabled and as gas-station attendants—preceded their matriculation at the Royal Danish Academy of Fine Arts (RDAFA), the birthplace of Danish modern furniture. 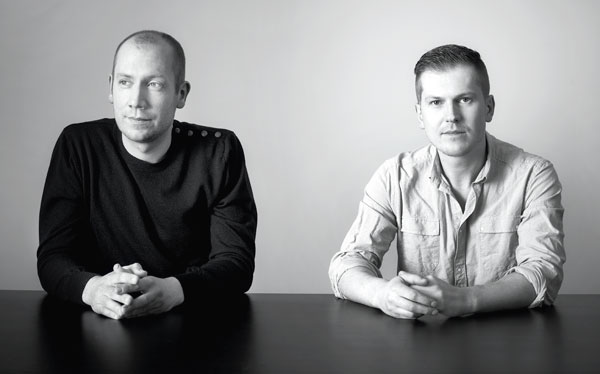 Beginning in the 1920s, RDAFA designers like Kaare Klint, Finn Juhl, and Hans Wegner began working in a stripped-down, economical mode that drew on Danish traditions in woodworking and cabinetry. Their experiments were not terribly well received at home, but began to catch on abroad after World War II. American enthusiasm, in particular, helped persuade the Danes to embrace the homegrown style, which quickly became so popular that it ceased to be as affordable as its inventors intended.

The refined simplicity of Danish modern informs every aspect of Norm’s multidisciplinary practice, from its built projects (like a new black-and-white penthouse apartment in Copenhagen) to its fast-growing catalog of furniture and products (like the beguilingly understated Raft Table for &tradition). “People think of design as added grandeur, something spectacular,” Bjerre-Poulsen says. “But when you try to get something that gets attention, it’s less striking. So we try to do something softer but with soul and character.” Norm’s Milk Lamp lightens the long Danish nights with a mushroom-like shade atop stubby, insect-like legs; in similar fashion, the firm’s whole design method seems an attempt to brighten the sober Danish tradition with a subdued sense of play. 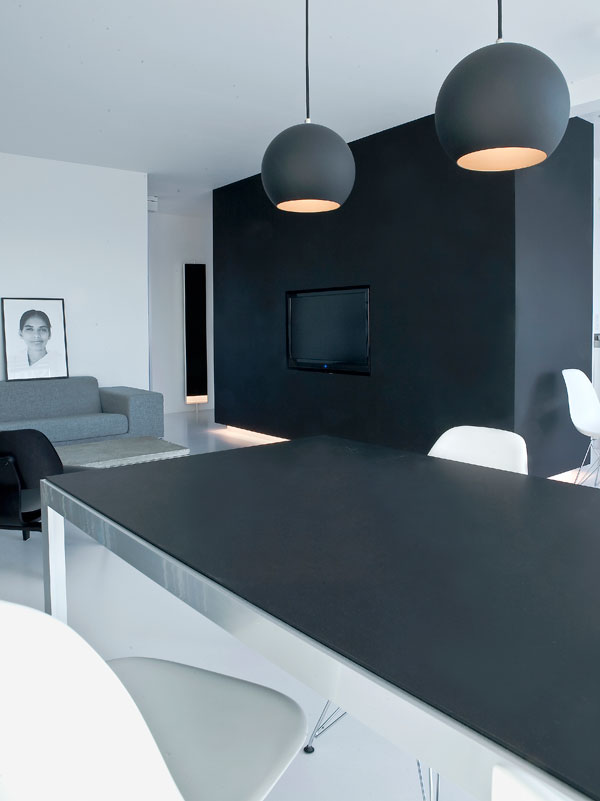 The second of their two Copenhagen penthouse renovations is a study in contrasts—black and white, linear and curvilinear.

That alone, however, isn’t what sets Norm apart. Along with claiming, and tweaking, their national heritage, Norm’s designers also benefit from a keen commercial sensibility, with Bjerre-Poulsen having alternated his studies at RDAFA with the pursuit of a business degree. “For many of our clients,” he says, “I can work on design strategy, PR work, graphic design—we can deliver the whole package.” Part of Bjerre-Poulsen and Rønn’s astute business approach is evidenced by what they aren’t trying to do: For the moment at least, they haven’t been pursuing large-scale architectural projects through big, international competitions. “I tried to do that in the past,” recalls Rønn, who worked in architecture offices like Jørn Langvad’s and Space CPH before striking out on his own with Norm. “It’s years of drawings—change this, change that, move the toilet here, move it back there.” Not getting tied up in potentially draining speculative work has allowed the firm to stay lean and agile, leading to promising new commissions such as an upcoming seating-and-dining line with American furniture heavyweight Design Within Reach (DWR). That kind of partnership, Rønn says, makes perfect sense for Norm: “DWR wants to have an influence on the design world. They want to make future classics, the future of the American design tradition.” DWR vice president Kari Woldum returns the favor: “They’re true collaborators from a design perspective, but they also have a strong understanding of the overall business,” she says. “They understand what it means to bring a product to market from design to production and engineering.” 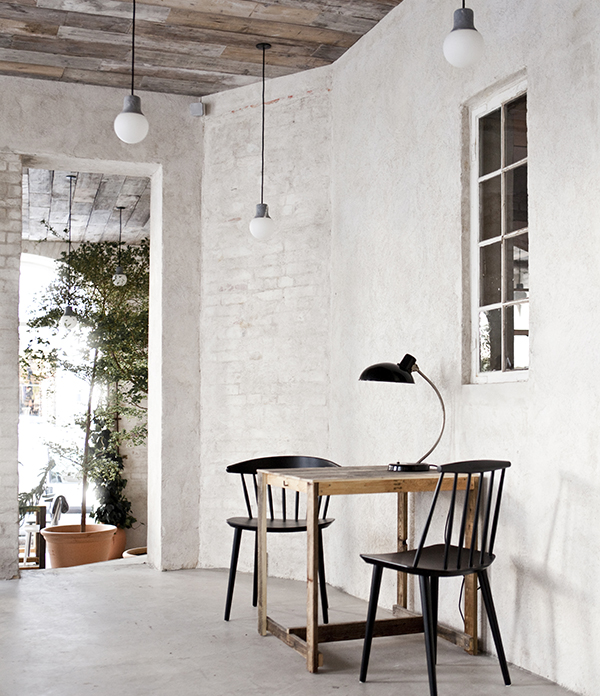 The Höst restaurant in Copenhagen, which won Best Restaurant at the 2013 Restaurant & Bar Design Awards, blends modern details with a rustic minimalist charm.  “When you enter one of our spaces, even when it’s empty, it should be nice and cozy,” says Bjerre-Poulsen.

Norm’s future-classical approach received its fullest expression to date in Höst, a new restaurant in Copenhagen created in collaboration with fellow design outfit Menu. The interior, loaded with rough wooden surfaces, exposed white brick walls, and chunky, industrial-type lighting, shows Norm at its sensitive best, creating an atmosphere that seems to balance the rustic with the sophisticated, the old with the new. It’s the kind of project, Bjerre-Poulsen says, that the firm has been hoping to do since its inception. “When we started our company in 2008, during the financial crisis, it was not in fashion to do this kind of trad-modern design.” When Norm got started, the trend in the Danish design world inclined toward tongue-in-cheek gestures; Höst, its designers feel, shows how Norm’s quieter, more contemplative perspective can apply to a whole interior environment. “It was so nice to do a small universe like that,” Bjerre-Poulsen says.

The fact that the restaurant concept has caught on the way it has (and attracted the attention of global design players like DWR) seems to confirm the duo’s feeling that Danish design is in the midst of a kind of renaissance, and that the firm is a part of it. “For decades, like when we were in school, everyone was screaming for something new to happen,” Bjerre-Poulsen says. Among others, they cite countryman Bjarke Ingels as a prime example of the new Scandinavian spirit—though they’re quick to point out their preference for formal and material subtlety over Ingels’s architectural bravado. “Designing something from the inside out,” Rønn says, is at the heart of their method, a tactic that seems well-suited to their misty, moist fatherland. Not that the designers believe in spending all their time inside. “If you want to go to Copenhagen,” he says, “come in summer. It’s the best place to be.” 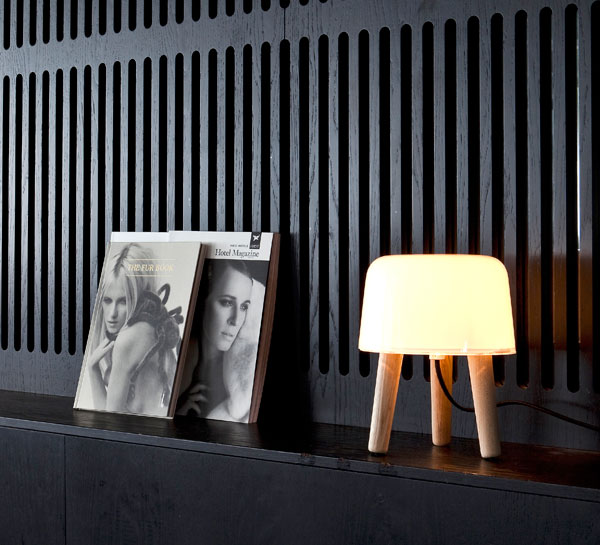 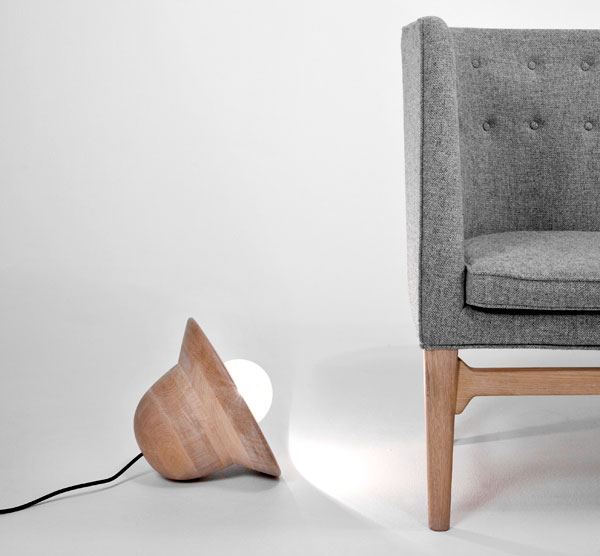 The Milk Lamp (top) and the Hat Lamp (bottom) combine sparse, elegant detailing with a touch of whimsy.