The complex’s new building makes a statement about the past of Berlin and the future of journalism.

In the ‘60s, when the German publishing company of the late Axel Springer decided to build its headquarters in then–West Berlin, it was also making a strong political statement. The golden glimmering office tower, which opened in 1966, stood directly facing the Berlin Wall, 256 feet high and “shining like a beacon into the East,” as Springer himself put it. Today, with the wall gone and the Springer company still going strong—publishing some of Germany’s most notorious yellow press and tabloids like Bild—it was able to buy a huge, nearly 100,000-square-foot plot along the former “death strip.” In 2012 an international competition was launched and ultimately won out by Rem Koolhaas and his firm Office for Metropolitan Architecture (OMA). (The final decision, in fact, was between three proposals: The one by OMA and two others by OMA alums: Ole Scheeren and Bjarke Ingels.) Construction began in 2016 and in September, after a short coronavirus-related delay, the new building was officially inaugurated beside the golden tower. 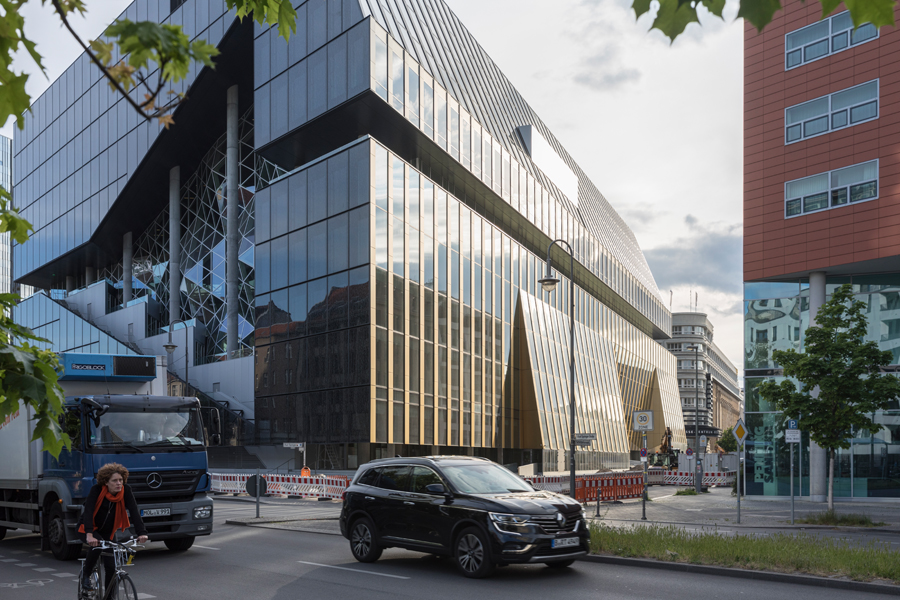 To call the new structure a mere extension would certainly underestimate the size of the giant black box. With a height of 157 feet, the building occupies the entirety of the rectangular plot. From the outside, the most striking feature is its curtain wall facade, which is made of dark glass panels so that it maintains its darkness during the daytime. But at night, the windows of the inner facade layer shine through and give the rock a more human dimension. Also striking is a big incision which seems to run through the rock, forming a small opening to the northeast corner and an enormous one to the southwest, where it abuts the older Springer buildings. Both openings demarcate the giant open space inside that runs diagonally through the building: Inside, each of the 11 floors contains a covered part with more traditional, separated offices, plus a wide, open terrace that hangs over what OMA calls the “digital valley,” an atrium with terraces on both sides that spans nearly the entire height of the structure.

Since this new building is meant to unite different departments that deal with new media and online journalism, the architects say their intention was to create an “informal stage at the center, a place to broadcast ideas to other parts of the company”—in the vein of the “classical newsroom, dominated by smoking, typing journalists.” There is an unmistakable personal nostalgia in these texts; Koolhaas himself worked as a journalist before becoming an architect. These explanations create a two-way reading of the architecture’s glaring symbolism: the breaking up of the volume can represent the breaking up of the Eastern Bloc in 1989, which fits the site in the city. But it can also be read as the disruption of the isolation of the digital worker in front of his many screens, in favor of a work culture that’s more collective and face-to-face. Either way, it is a fitting follow-up to the ‘60s high-rise, which served as a shining beacon of early capitalism. At least in terms of a trite symbolism—the golden tower and the ruptured dark rock—they get along together very well.