Paris’s Le Pigalle, A Grand Hotel With the Charm of a Friend’s Place

A Paris hotel opens its doors to its neighborhood and the colorful creatives who work there. 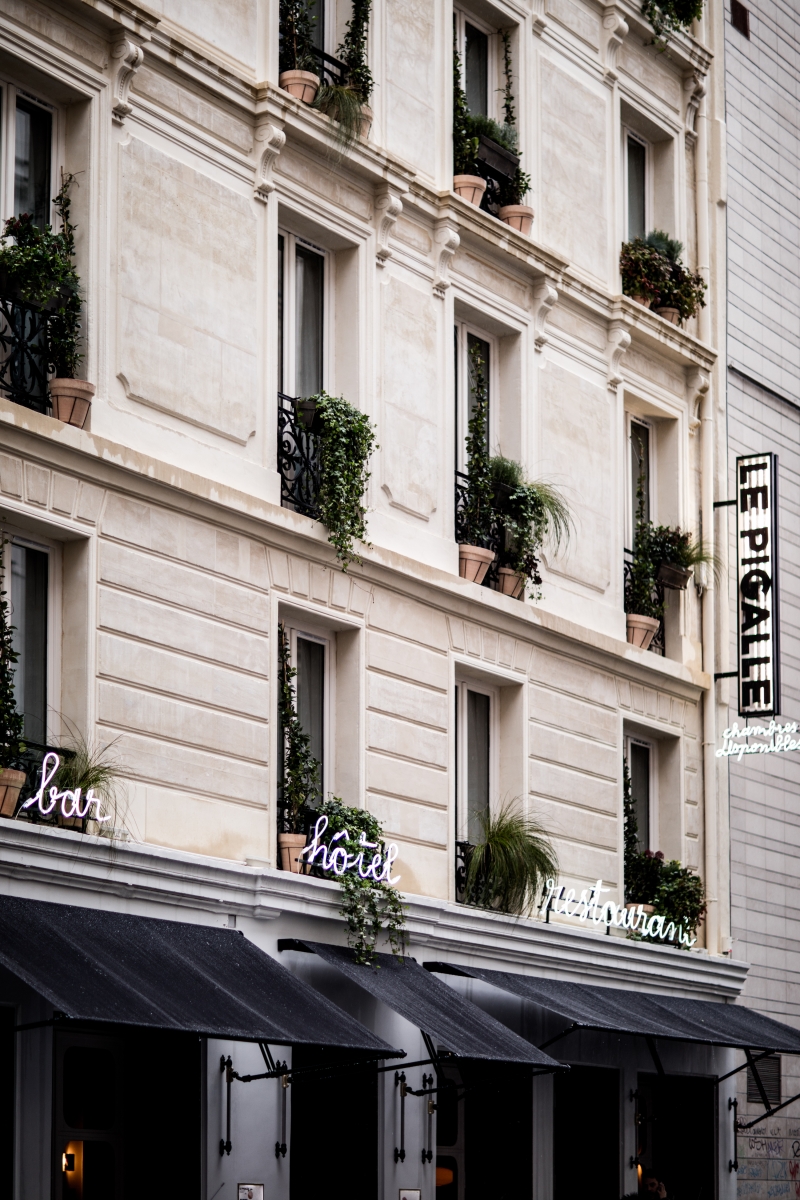 Cursive neon script on the Le Pigalle’s facade is a tribute to the luminous aesthetic of the nearby red-light district. The hotel opened in November 2015.

For some, Paris represents the epitome of elegance and class. To others, the city’s appeal lies in its seedy underbelly and the creative, enigmatic characters who frequent it. Le Pigalle, the motley quartier that straddles the city’s 9th and 18th arrondissements, has long been the heart of this other Paris. In tribute to its colorful reputation, a new namesake hotel has taken up residence in the shell of a former hôtel de quartier, steps from the red-light district.

The 19th-century building embodied the strict lines and ornamentation typical of the pre-Haussmann neighborhood, in the neoclassical style known as La Nouvelle Athènes. While the architects of Le Pigalle Hotel, Charlotte de Tonnac and Hugo Sauzay of Festen Architecture, made sure to retain the spirit of the building, what truly inspired the redesign was the neighborhood itself: neon lights, decorative kitsch, and the brazen irreverence that comes with a colorful nightlife.

Creative discussions between the hotel’s founder, Valéry Grégo, and the architectural duo led to one firm conclusion: The hotel should be as open to the quartier’s residents as it would be to its guests. This meant no front desk or primly discriminating gatekeeper behind it. Instead the ground floor was reconfigured as one open space—drenched prettily with natural light during the daytime—divided into a café, bar, and restaurant, plus a vinyl library, and a newspaper and book kiosk.

“The idea was to create a ‘neighborhood hotel,’” says de Tonnac. “We also wanted to re-create a domestic spirit, a place people would actually live in.”

As such, the dwellings don’t adhere to a standardized design, with accoutrements that include novelty ashtrays, View-Masters, and money boxes clustered on sideboards as if accumulated over an occupant’s lifetime. Embellishing the walls, the work of local graphic artists and photographers weaves its own visual tale of the Pigalle’s hedonistic history. And those inclined to sample the saucier side of the city may also discover a weathered copy of the Guide des plaisirs à Paris tucked in a drawer alongside the hotel stationery. Even the room keys tend more toward the quotidian than the fancy, affixed to kitschy miniatures of the Eiffel Tower. “It’s almost like the bedroom of a friend’s house, with the comfort and the service of a hotel,” adds Sauzay.

Most hotels make at least some effort to entice locals to spend time in their establishment, but Le Pigalle goes far beyond a well-heeled happy hour: It’s actually curated by locals. Furniture hunter and gallerist Alexandre Guillemain is responsible for the hotel’s furnishings, while local florist Muse provides spirited arrangements. Hussam Mouli, who runs a newsstand nearby, and the owners of the 9th’s beloved neighborhood bookstore Les Arpenteurs compile the selection of reading material at the hotel’s own literary kiosk. And for evening entertainment, the quartier’s pole-dancing doyenne Marzieta has revived the sultry athletic art. “I wanted our guests to experience a genuine version of the neighborhood,” says founder Grégo, who grew up in the area. “The only way was to work with the neighborhood itself. We thought that Pigalle didn’t yet have a place that really reflected the neighborhood spirit.”

During the renovation, Grégo happened to unearth a run-down Wurlitzer jukebox, which, restored to glory, now sits in the hotel’s basement, endowed with a mercurial playlist by Le Pigalle’s resident musicologist, Victor Kiswell. “It could have been called the ‘soundtrack of northern Paris from 1900 to 2015,’” Kiswell says of his selection for the hotel’s soundtrack and in-room rare vinyl collections, which ranges from Jimi Hendrix’s Electric Ladyland to Shirley Bassey’s At the Pigalle. “It had to cover all the musical fields that gave Pigalle its pedigree.” 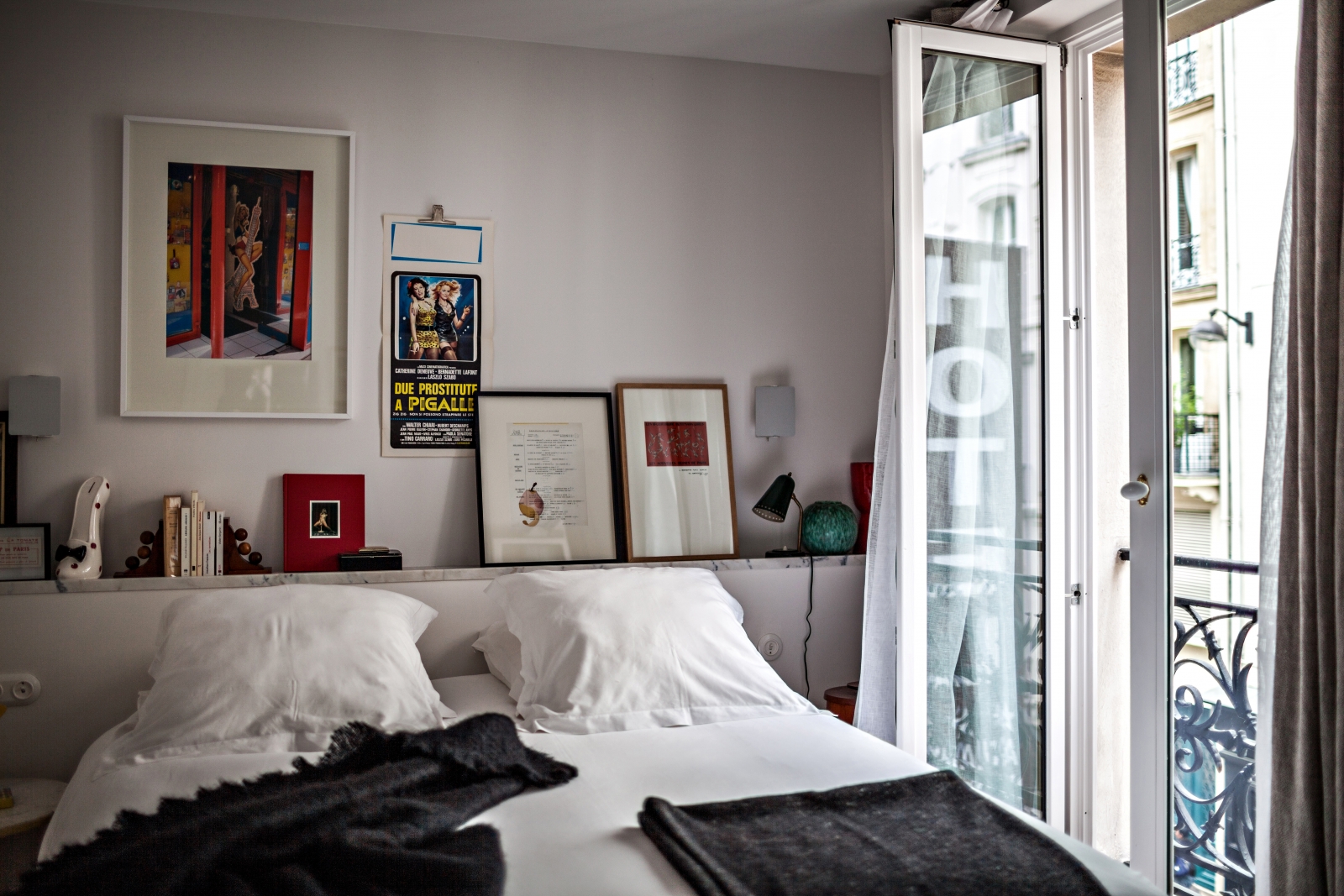 The 40 rooms in Le Pigalle are designed to evoke the lived-in look of a stylish friend’s home. 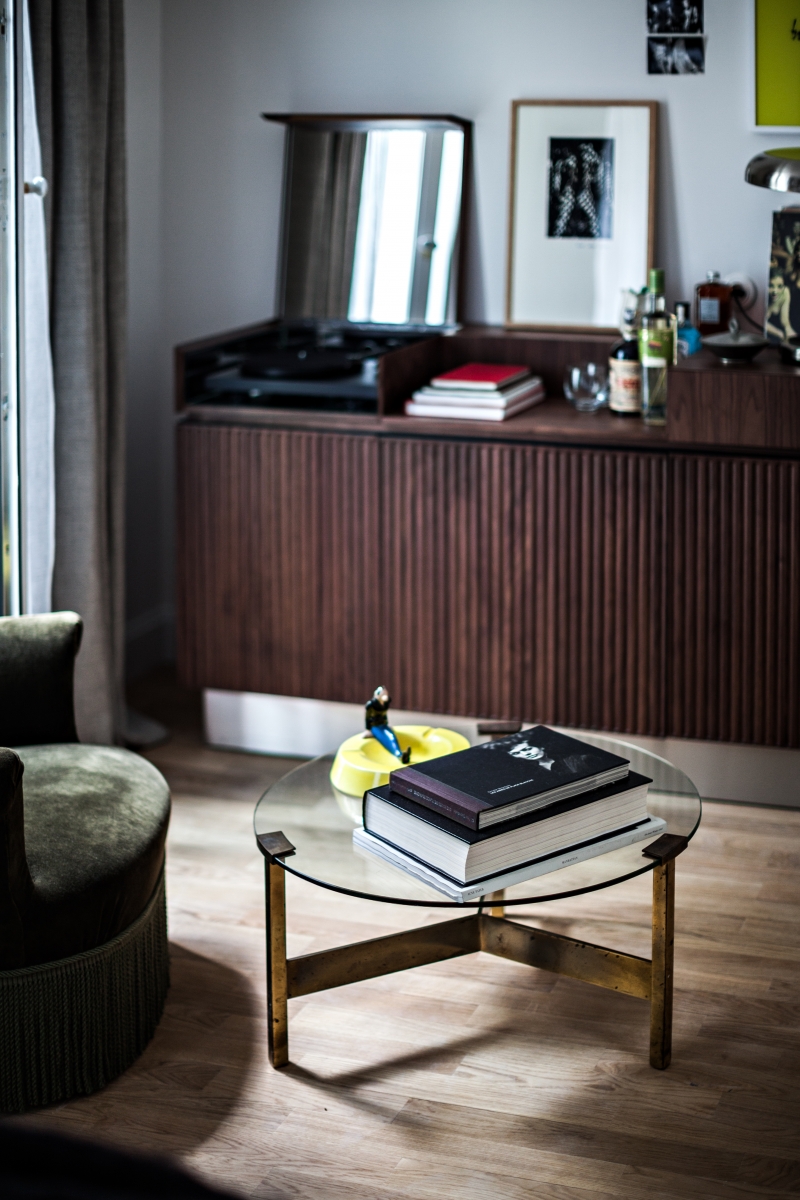 Furniture hunter Alexandre Guillemain’s finds for the hotel, which is a member of Design Hotels, range in aesthetic from Nouvelle Athènes to postwar vintage. 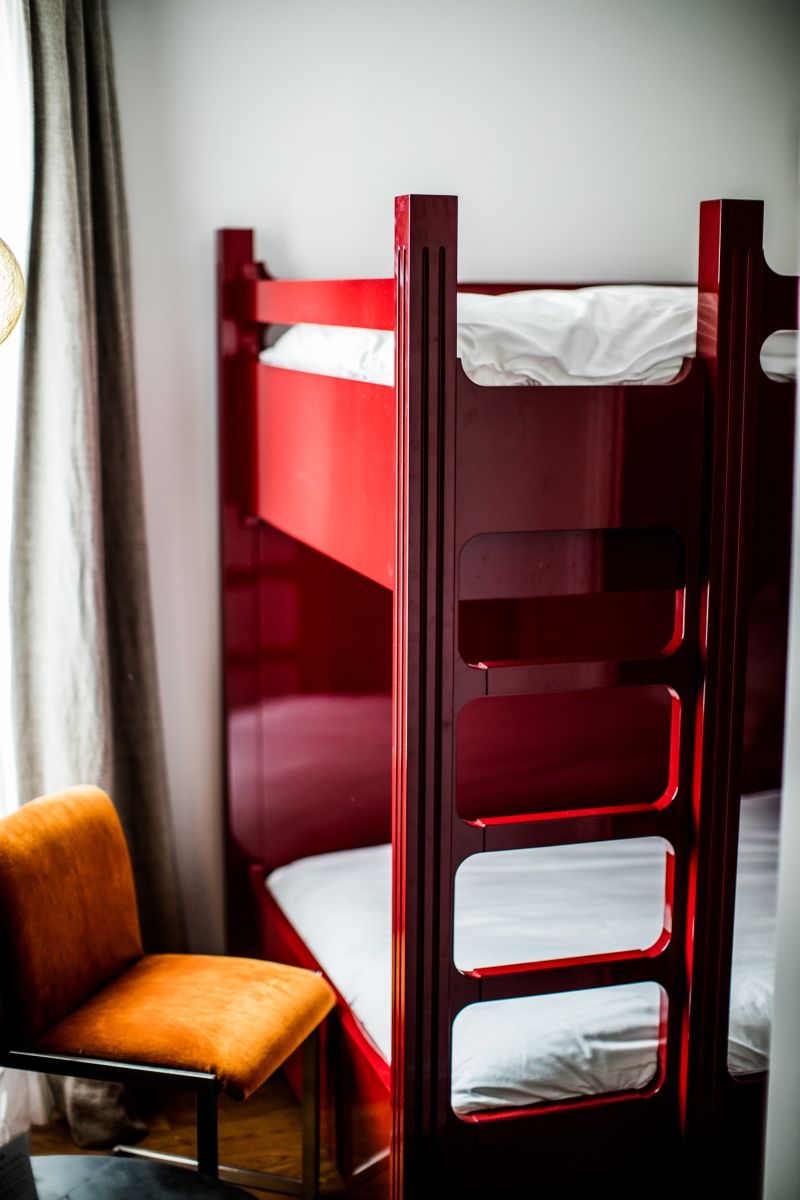 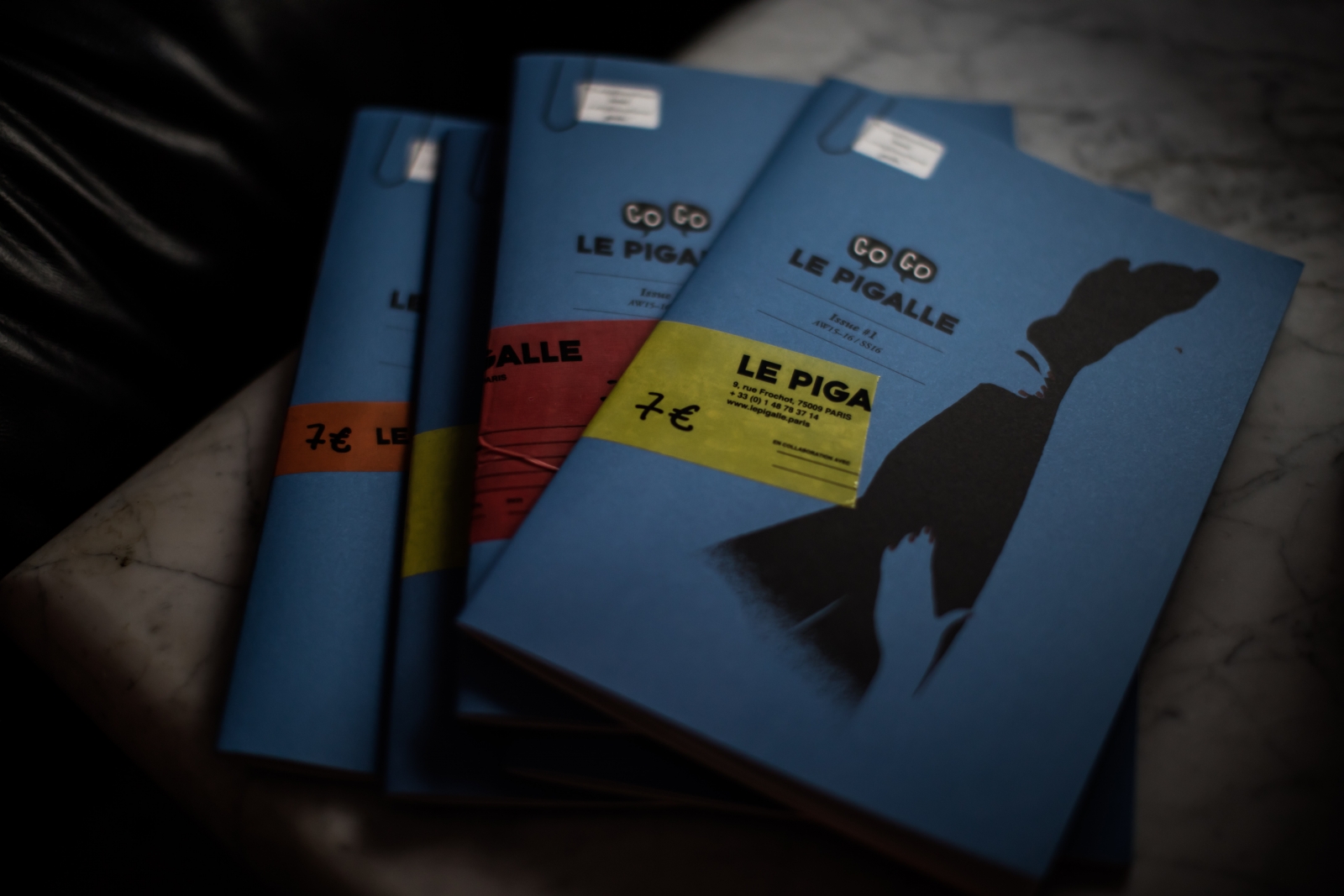 To help guests really get to know the Pigalle neighborhood, the hotel collaborated with Gogo City Guides for its own personalized release. 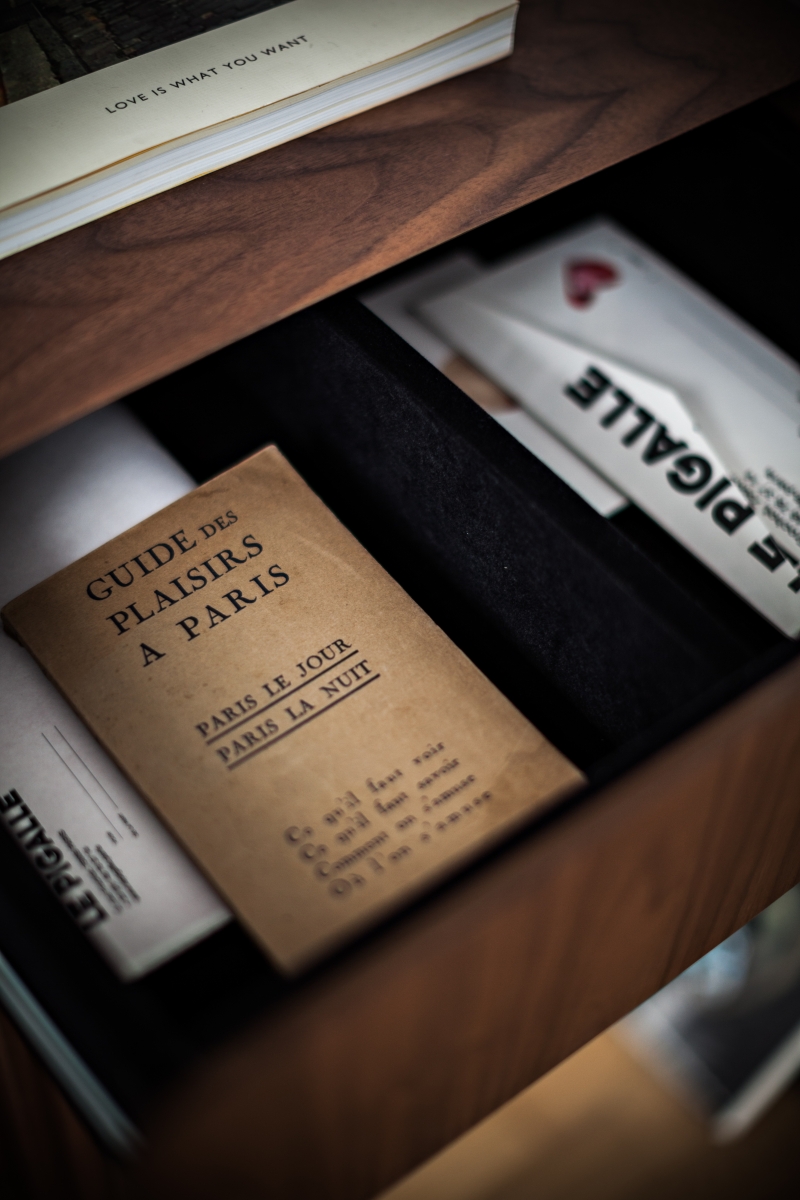 In each room, vintage copies of the Guide des plaisirs à Paris are tucked in a drawer alongside the hotel stationery. 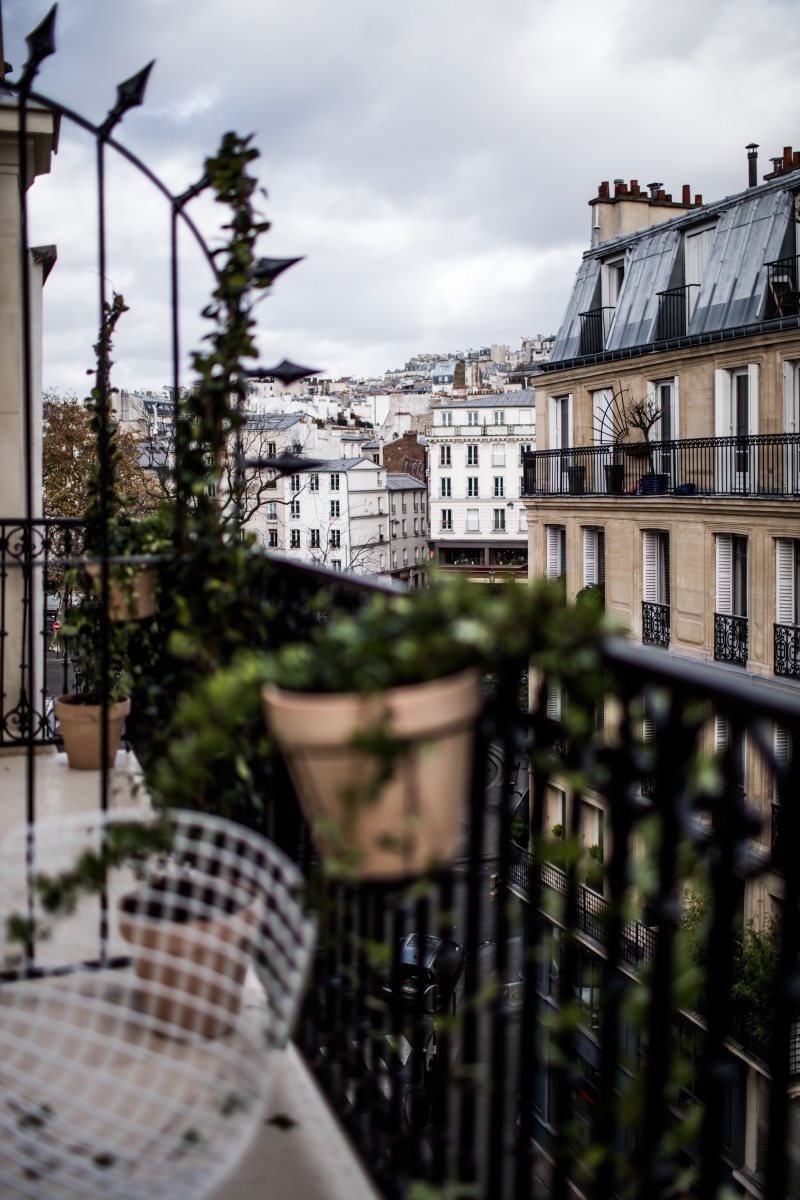 Many of the rooms have views toward Montmartre, and some even look out onto Sacré-Coeur.