“Park” team: Koning Eizenberg and ArupIn response to the design brief for Urban Intervention, a design ideas competition being hosted  Seattle Center and AIA Seattle, “Park”, one of the three finalists proposes just what its name implies: a park-like setting that addresses the 9 acre Memorial Stadium site and provides a new organization for the […]

In response to the design brief for Urban Intervention, a design ideas competition being hosted  Seattle Center and AIA Seattle, “Park”, one of the three finalists proposes just what its name implies: a park-like setting that addresses the 9 acre Memorial Stadium site and provides a new organization for the many disparate parts of the larger, 75 acre Seattle Center campus into a singular, unified solution. The proposal is much more complex than a simple park, though, and the more you dig into it the more you discover how thoughtful and appropriate the solution is. 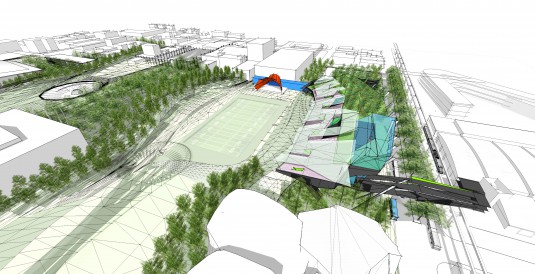 The proposal evokes the glacially scoured topography of the city and Puget Sound through its use of a series of landforms with a strong north-south orientation. Starting at the west edge of the campus, the “Park” proposal introduces the Fountain, an urban plaza that links the Mercer Street theater row to the existing International Fountain and Fischer Pavilion to the south. Moving to the east, the team proposes a ribbon-like Forest of indigenous plantings that tie in the educationally-themed Pacific Science Center and Children’s Museum.

The Hill then rises up from forest and ingeniously becomes ‘informal grandstands’ for the athletic Field, which serves as the centerpiece of a meadow that extends south to the Space Needle and becomes a new front door to the city. The Ridge is a forest-capped building that provides grandstand seating, recreation facilities and mobility hub built over a subterranean parking garage.

The Avenue is the final landform and refers to an improved Fifth Avenue with a reconfigured and expanded monorail, elevated bridges connecting to the Gates Foundation campus, and public access point to the mobility hub. “Park” is a compelling concept in many ways. The first is its simple introduction of nature into the city. It acknowledges that people need access to nature if density is going to be livable. “Park” offers a provocative vision of what that could look like and one can’t help but imagine how great the proposed Forest could be in a hundred years – a towering Pacific Northwest cathedral of Douglas Fir and Cedar. But the proposal goes beyond a singular gesture and calls for an interconnected series of parks, evoking the century-old, yet never fully realized, Olmstead Plan for Seattle. Proposed connections along Broad Street, linking the site with the emerging South Lake Union neighborhood the east and Olympic Sculpture “Park” to the west, retrace traditional Duwamish Pathways between fresh and salt water, and hint at a solution for a century-old urban design problem. Numerous neighborhood and city plans have called for some sort of restoration of this trail, but a bold and provocative solution has proven elusive thus far.

“Park” is a call to action for Seattle to come up with a bold vision for this vital link between these new and important city parks. Extending Seattle’s famed monorail to the north is another bold gesture that points squarely at one of Seattle’s most contentious and longstanding debates. The city desperately needs more efficient public transportation options for its west side neighborhoods – Queen Anne, Magnolia, Fremont and Ballard. Fair warning to the “Park” team – this is one thorny issue! “Park” stands out from other competition finalists in its transformation of the entire Seattle Center campus. The jury recognized and applauded this, yet voiced concerns over the transition between restored natural topography and city. The Jury asked the “Park” team to further develop its “approach to the connection to the monorail and the city beyond the site.” The decision by the team to reintroduce north-south topography presents issues. While this is a contextually appropriate response, it reinforces  a classic Seattle conundrum–how to circulate east-west across the strong north-south grain of our city’s topography efficiently. Weiss Manfredi was able to solve this circulation issue in an elegant and effective way at the award-winning Olympic Sculpture Park and the “Park” team might benefit from some of the same thinking. On a lighter note, one can’t escape the irony of finally finding a flat building site in Seattle and then creating topography where there was none. Whether you love it or hate it, the topography is what makes Seattle unique. Urban Intervention has shown us a glimpse of what the next 50 years at the Seattle Center Campus might look like. Visions like “Park” affirm again that the campus is a vital resource for the city and has a unique opportunity to help guide us toward a more resilient and livable future.

Brian Court, an architect and associate with Seattle’s Miller Hull Partnership, is a member of the URBAN INTERVENTION scoping and advisory committee.