One of Phoenix’s newest boutique hotels, the Camby embraces its southwestern roots without delving too far into cowboy territory. 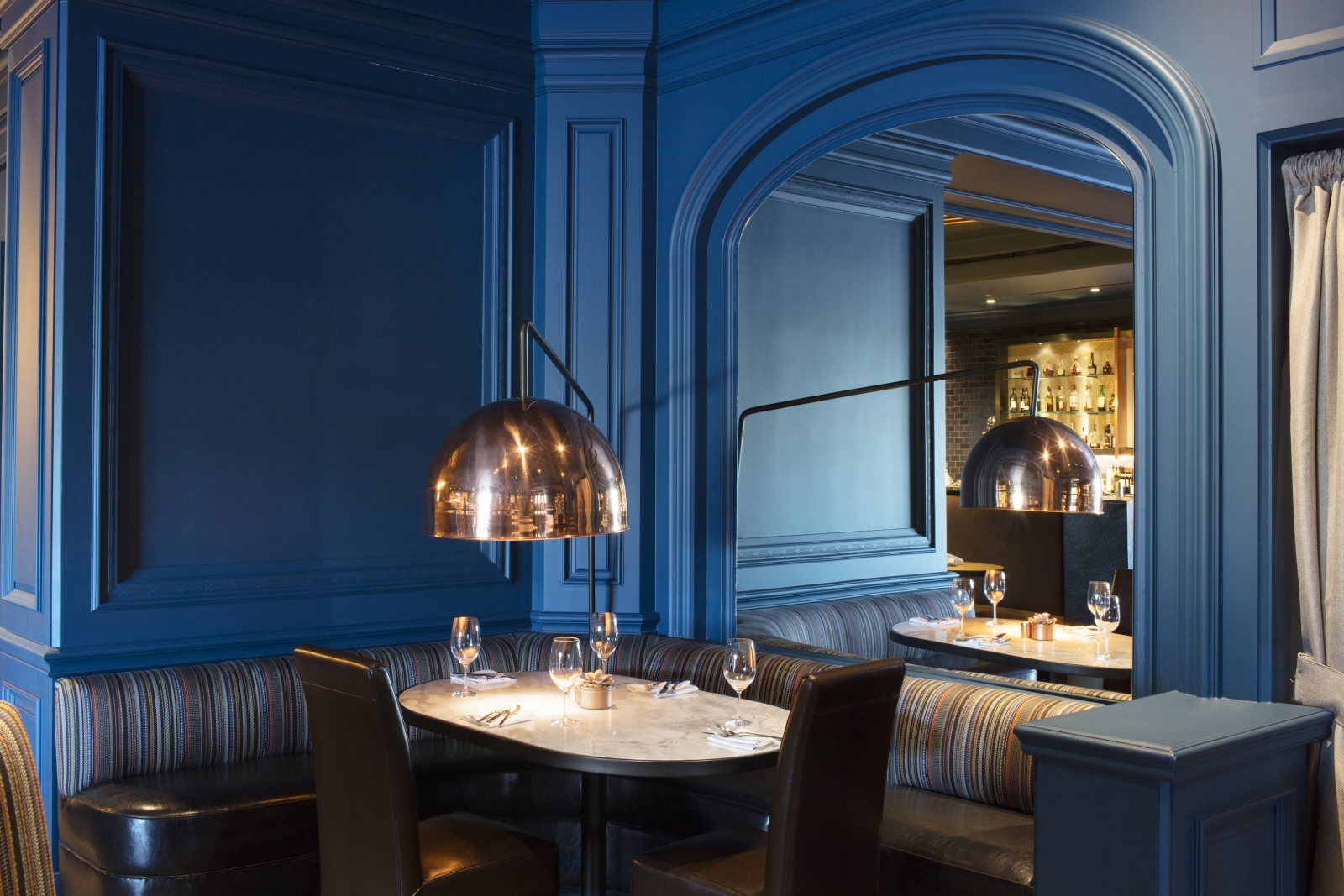 The sleek, dark tones of the Camby’s resident restaurant of the Artizen Crafted American Kitchen & Bar, which serves inventive modern cuisine made from local ingredients.

If the assortment of cacti dominating the roadside landscape isn’t enough of a reminder that you’re in Arizona, the rocky peaks of Phoenix’s iconic Camelback Mountain looming on the horizon should help make the point. It was this voluminous formation (or at least its name) that inspired the moniker of the city’s new boutique hotel, the Camby, whose rooms overlook the natural landmark.

From the outside, the Camby is fairly unremarkable, taking up residence in a vapid 1980s architectural pastiche that was once home to an iteration of a certain double-barrel-named luxury hotel chain. A peculiar topiary in the shape of a two-headed camel sits at the entrance, a hint that there may be more to the place than meets the eye.

It’s this notion of the “double take,” or, as the hotel’s creative team terms it, “look and look again,” that is the crux of the Camby’s design by Stonehill & Taylor. Walk past the bow-tied doormen and into the lobby and you’ll immediately get the sense that this 227-room hotel isn’t one to follow convention. The many cheeky details throughout are intended to be conversation starters for guests, be they the meeting table that becomes a pool table, trompe l’oeil artwork on the walls, or spirited phrases appearing in unexpected places, like on the guest room ceilings and bath mats (“clean up your act” is one such aphorism).

That playfulness extends all the way to the Camby’s staff, whose training is focused as much on branding—the work of Colorado-based marketing firm Epiphany—as on the technical intricacies of their jobs. “We try to show them how important it is for them to let their personality show,” says Doug McCorkle, the hotel’s chief ideation officer. “A lot of guests like a luxury experience without all the formality that usually goes along with it. They would rather it be a little more casual and playful—and that’s part of our target, the ‘playful professional.’” Whimsical job titles like McCorkle’s are all part of the concept—the head of human resources is known as the “chief culture officer,” and restaurant staff are known as “BFFs” (beverage and food fanatics), while “experience curators” attend to the front desk.

Michael Suomi, principal and interior director of design at Stonehill & Taylor, saw a great opportunity to use this irreverence to bring a revived spirit to what had long been a staid, stuffy hotel. “We rea- lized there were great classic bones to the building already,” he says. “But we wanted to make them stand out in a very unique and different way.” 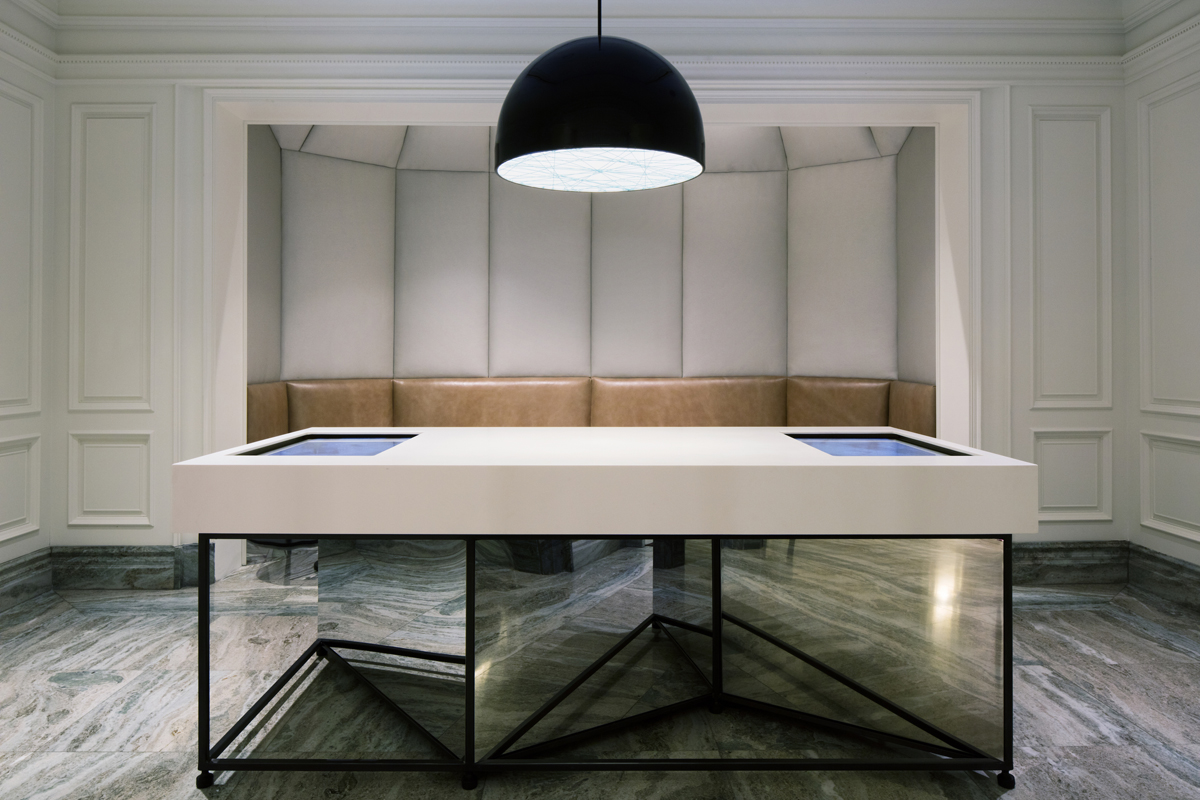 Adding to the lively atmosphere, the Camby’s open lobby space features ample opportunities for lounging and interacting with other guests.

The New York–based firm’s design succeeded in executing the southwestern aesthetic typical of the region but with a modern twist, so the Camby feels less like a luxury ranch and more like an urban getaway. Central to that are the “Five Cs” of Arizona—copper, cotton, citrus, cattle, and climate—the cornerstones upon which the state’s economy was built. To imbue the hotel with a sense of place, the designers layered those elements into its finishes, architectural moments, and layout of the public spaces. Copper ceilings in the bedrooms are a riff on the idea of having a mirror over the bed, while the sophisticated motifs adorning guest room sofas and area rugs are sufficiently of the Southwest without crossing over into cowboy territory (the cattle-skull-inspired lamps, however, are slightly more blatant). In the lobby sits a striking couch, by Stonehill & Taylor, that is an abstraction of Camelback Mountain, while copper chairs by Trellage-Ferrill Studio appear almost deconstructed into framelike elements.

To make the lobby space more interactive, Stonehill & Taylor removed several walls and replaced carpeting with stone that continues throughout the ground floor. “We wanted the stone floors to kind of wind through like a path,” says Suomi. “That way it would connect the spaces together.” Two sleek food and beverage locales—the Bees Knees cocktail lounge and Artizen Crafted American Kitchen & Bar—add to the revelrous vibe.

The firm also renovated what was a rather barren pool deck into a more exuberant space. Ping-Pong tables are stationed within a few steps of the pool, while in the evenings a giant projector screens old movies on an adjacent wall. “We felt like we needed to make it a much more social area,” says Suomi. The designers also installed a fire pit and created a small kiosk for serving food and beverages poolside, where guests can kick back on lounge chairs amid a refreshing cloud of mist released intermittently from the awning above.

The outdoor area is a fitting complement to the playful approach to luxury employed by the Camby, which, since its opening in December 2015, has filled an important gap in Phoenix’s hospitality market. Given this newfound injection of cool, perhaps the Arizona capital is on its way to a slightly more fashionable status? 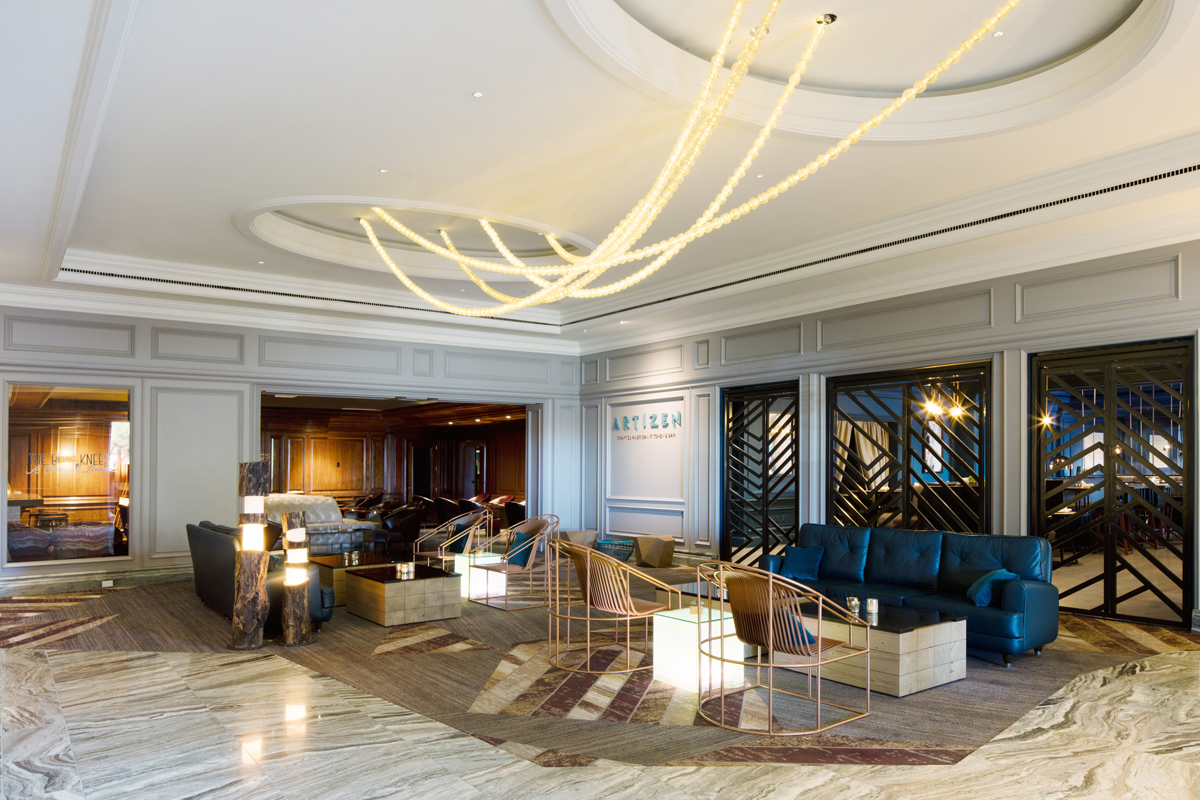 Among the seating are the striking copper chairs by Trellage-Ferrill Studio. 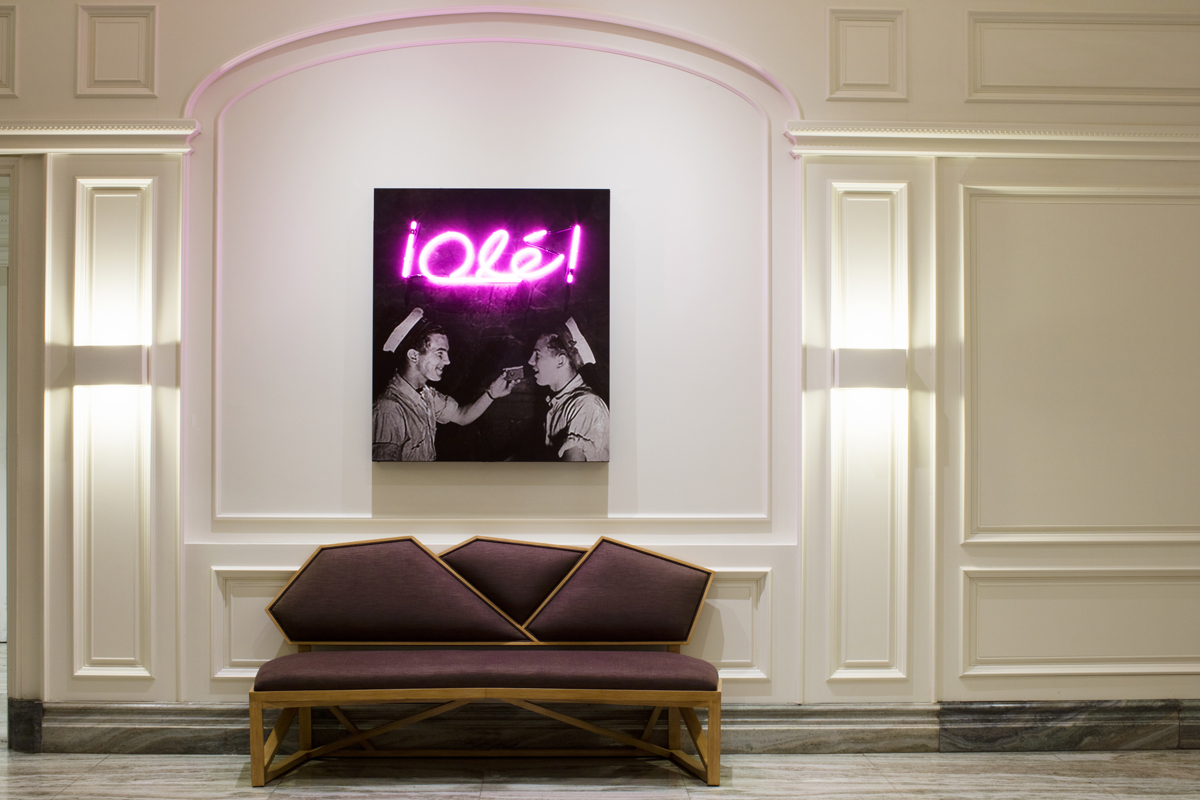 The sofa custom-designed by Stonehill & Taylor is inspired by the form of the Camelback Mountain. 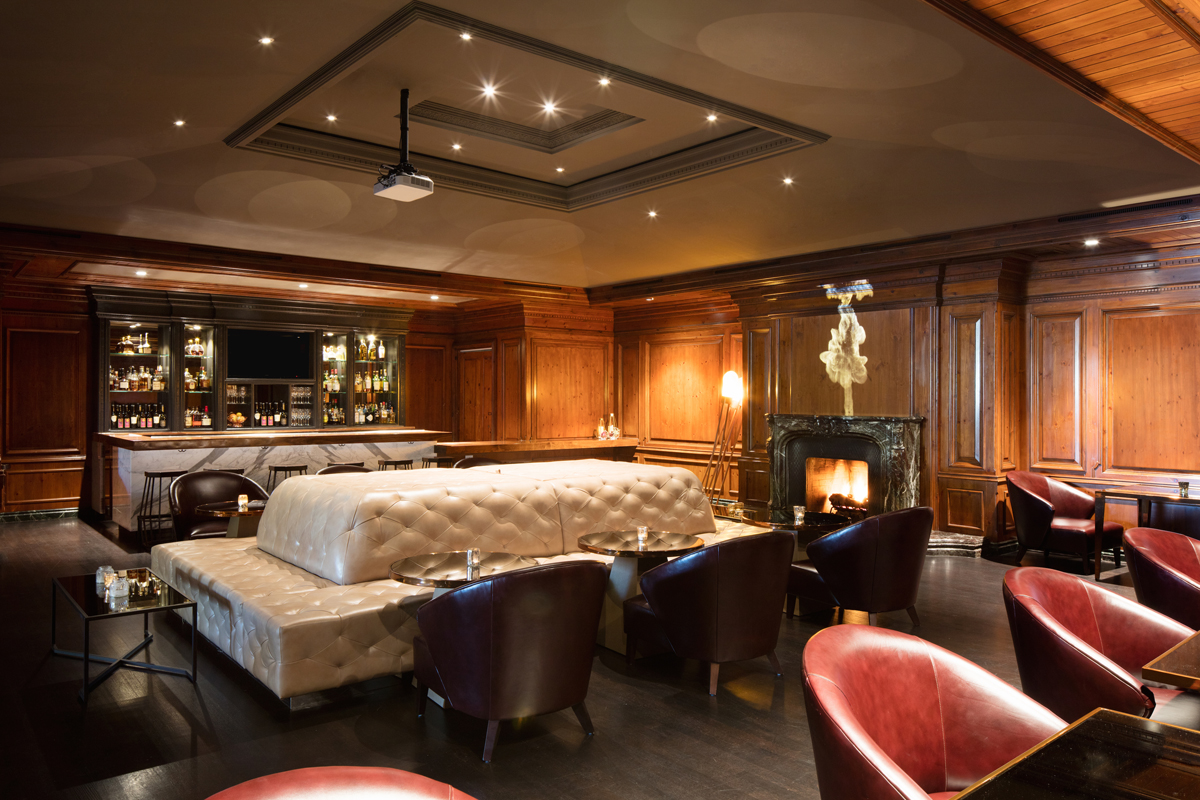 The Camby’s cocktail lounge, the Bees Knees, is named after a drink created in the Prohibition era, when bathtub gin, known for its foul taste, became popular. To mask the gustatory unpleasantness, people would add lemon juice and honey, which eventually birthed the drink’s name. 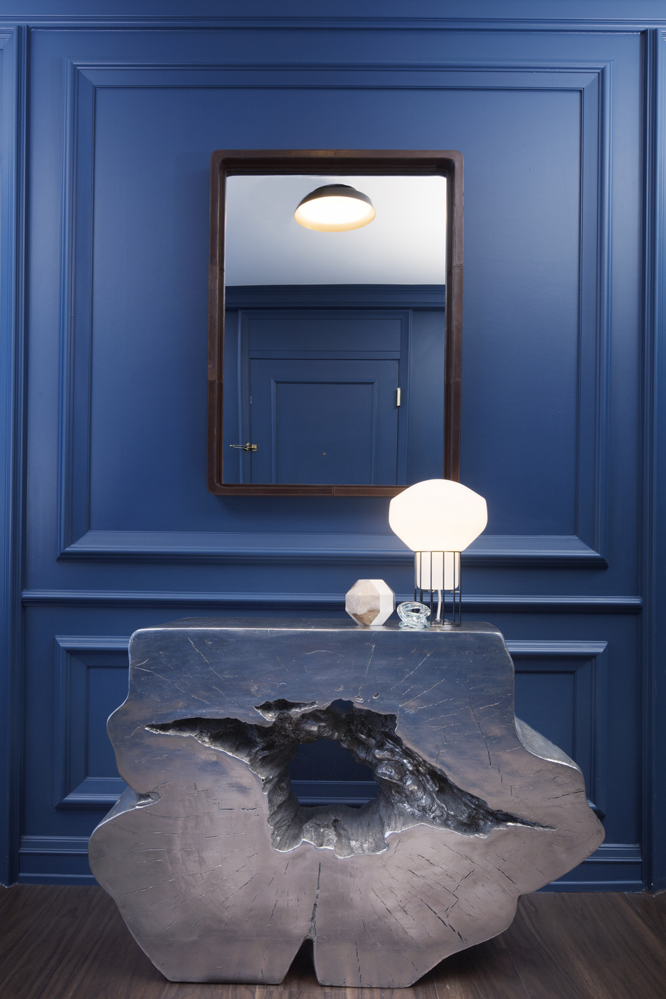 The well-considered items that compose the Camby’s decor are intended not only to pique guests’ interests but also to incite conversation.