Charlie Miller, P.E., has been fomenting a quiet, green roof revolution in this country for years. So quiet that you may not have heard of it, or him.It’s a steep climb up narrow, carpeted stairs to the modest Roofmeadow office on historic, cobble-stoned Germantown Avenue in Philadelphia–a great metaphor for what Charlie Miller, P.E., internationally […]

Charlie Miller, P.E., has been fomenting a quiet, green roof revolution in this country for years. So quiet that you may not have heard of it, or him.

“It’s hard to sell simple, elegant ideas. People [Americans] are in love with technology,” says Miller with a sigh of considerable frustration. If it’s too simple it must be suspect. And yet he revealed that he, too, had his own, initial doubts about the green roof revolution.

“I went as a skeptic,” Miller says of his trip to Germany in 1997. A trained engineer and geologist, he was invited by engineer colleague, Joachim Tourbier. He was bowled over seeing the extent of green roof projects underway, trucks hauling soil, zoning codes in place, and a populace for whom green roofs are a natural predilection (“a deep, gardening culture”) and priority. They had an added impetus–recovering or reclaiming the devastated post World War II cityscape. “Nature becomes a player in how a city looks,” Miller notes. 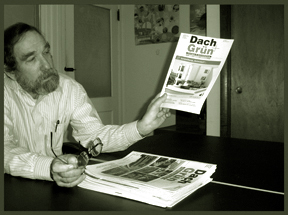 “It’s always bittersweet,” he says when another monthly copy of Dach + Grun arrives for addition to his careful magazine archive. Germany was way ahead of the green roof curve in 1997 – and still is.

In this country, flat roofs are considered vulnerable to leaks, a distinct liability. Why not in Germany? Couldn’t they just send us a .dxf (CAD) file of their favorite roof section? “Being a roofer in Germany is a serious profession,” Miller points out. “Trades take their professionalism seriously. Being a master in your field is being respected–it’s not the building section, it’s the craftsmanship. The pride.”

Miller returned from Germany in ’97 and set up his company “Roofscapes,” now “Roofmeadow.”
He must have had visions of green trucks whizzing around from roof project to roof project.

Most recently, he returned from France where they specialize in green walls instead of green roofs. You think, between Germany and France, we could begin to create an integrated, green vision for the built environment? Think again. Miller laughs, “the French and Germans don’t talk to each other” about their divergent green initiatives.

Well, Rome wasn’t built in a day either. And speaking of Romans or Italians, Miller says they love their clusters of potted plants on their roofs…and the Swiss love their ordered gardens.

What about us, the Americans?

“Americans are pragmatic, hard headed. Philadelphia is on the ground. Gardens, parks, open land,” says Miller, ruefully. We harbor romantic, pastoral visions, leaving “an industry waiting to find its footing,” he says. It’s tough to be a magician that conjures “lifted landscapes,” as green roofs have been called. It’s also tough to sell the artistry of an idea you can only see looking down from a tall building. Even when client prospects see that thin, green veneer, “If they can’t envision a lawn chair and martini, it doesn’t sell,” he chuckles. 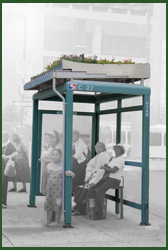 “The projects that really change people’s lives are on flat roofs,” but Charlie Miller doesn’t think Philadelphia’s vast, old stock of row-house flat roofs will go green until the buildings themselves get replaced. Only new construction can support the added weight and technical demands of green roofs. Roofmeadow does partner with Onion Flats, a local architectural firm that is sympathetic to his cause.

Charlie Miller describes a green roof as a kind of elevated mesa; in other words, a southwestern kind of conception. Wait a minute. I thought we were in Philadelphia! Surprisingly, the climate in Pennsylvania is close to ideal for green roof longevity, according to Miller.

Although a green roof is the horizontal integration of a complex matrix in a relatively thin plane, Miller “absolutely” sees the future in 3D. The more Roofmeadow can sculpt their work towards the complexity and diversity of nature itself, the better. He doesn’t know for sure where all this will lead. He’s appropriately humble about what a green roof can accomplish, however, since there are so many variables. Biomimicry only goes so far. “You can’t build for birds.”

Roofmeadow does not sell products. They are not design/build. Their expertise covers the range– hydrology, soil science, horticulture, rooftop agriculture, landscape design, green infrastructure, environmental policy, and green roof construction practices. They have already realized impressive projects, locally and nationally, with a small staff operating as if from a virtually “undisclosed location.”

CHARLIE and THE TIME MACHINE 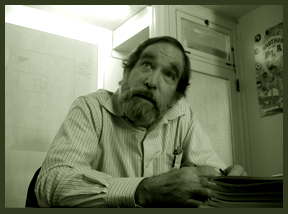 Charlie Miller ascribes to the critical mass theory for green roofs when it comes to achieving the dream of wide acceptance. Progress is painfully slow but time may be on his side.

Melissa Muroff, Esq., vice president of Roofmeadow, points out that Environmental Protection Agency (EPA) clean water and combined sewer overflow (CSO) standards now carry sizable penalties for non-compliance. Pressure to change is looming as the political impact ripples across the country. Muroff strongly believes private developers need to pitch in and do their share of storm-water management, for example, thus lessening the potential burden for all taxpayers. Although the task may seem onerous, the goal is to “control and celebrate water as an asset for the city,” she says.

When it comes to cities, Philadelphia is definitely a national leader in creatively tackling the EPA challenge. There are so many agencies at work here, though, it’s daunting even for the players themselves to mentally grasp all the moving parts that will coalesce into a futuristic green time machine, hurtling through outer space towards the Federal Clean Water Act (CWA) deadline of 2035.

As Charlie Miller and I wrapped up our discussion, we touched briefly on “blue-green infrastructure,” an intriguing term apparently coined by his colleague Prof. Tourbier. Miller sees the potential of “blue-green” not in technology and steel structures but, instead, in “manipulating the materials of earth, water, and plants in a clever way to achieve a richer natural environment.” Miller is generally referring to cities by implication but he says the strategies apply equally well to suburban and rural settings.

And so, whether designing for a steep-pitched roof or persistently nudging a reluctant citizenry towards the limitless aesthetic and energy saving benefits of elevated green, Charlie Miller loves a challenge. “Doing something impossible is more fun!”

That pioneering spirit spurs him and his dedicated staff on. 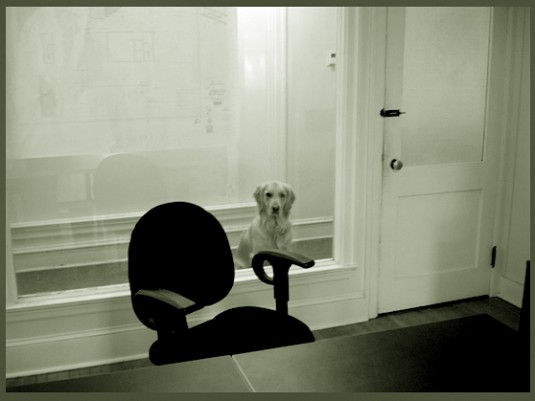 Charlie Miller had to get back to work after our lengthy interview. 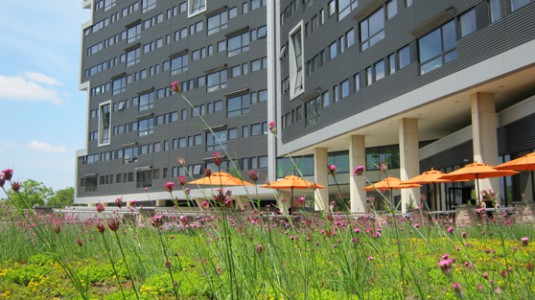 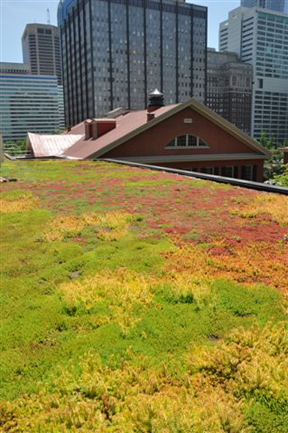 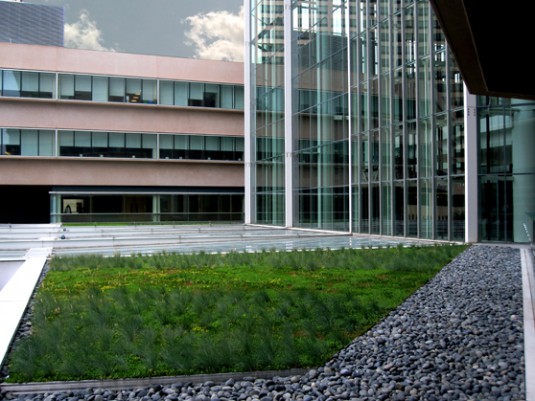 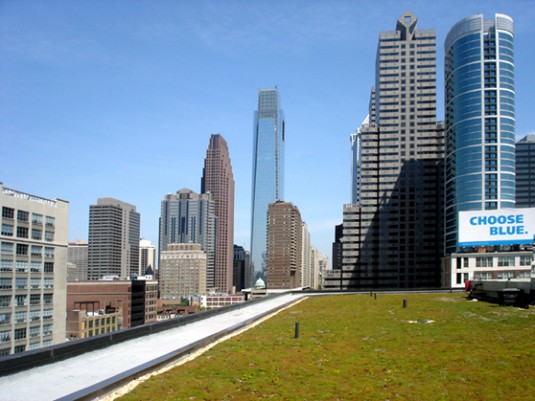 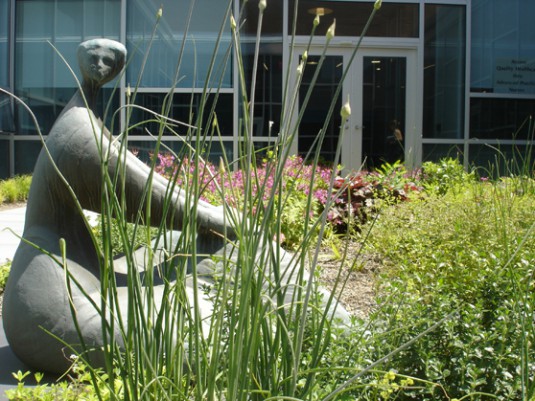 Art and strategic design for a bully-free Philadelphia (“B. Free.”) (http://bfreephiladelphia.wordpress.com).