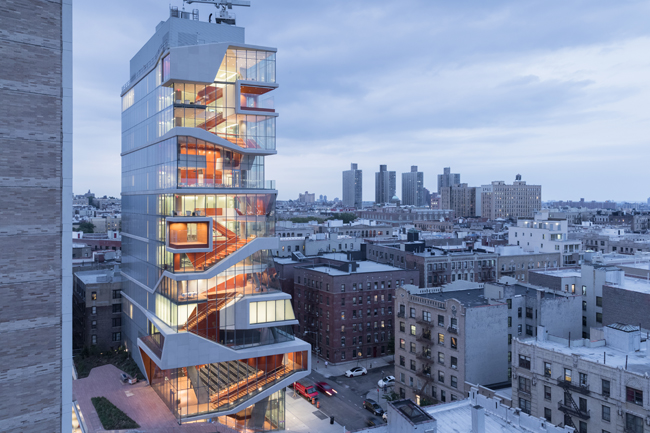 The Roy and Diana Vagelos Education Center at the Columbia University Medical Center opened to students in mid-August, but they were preceded by an ominous bunch. “Actually, the first group of people to inhabit the building were stiffs,” hammed an affable Elizabeth Diller, primary principal of Diller Scofidio + Renfro (DS+R), on a recent tour. Intended to endear, the quip highlights the strangeness of a scenario in which surgical cadavers, simulation dummies, and swarms of medical pupils coexist, rather happily it turns out, in a single building.

Architectural economy typically renders this melange gloomily, as the layout of nearly any medical school (or hospital) makes clear. Classrooms often have the charm of bunkers, natural light is a well-guarded luxury, and grim hallways seem all but typological prerequisites. This state of affairs, like so many others, goes by the ignoble name of “efficiency.”

Tucked away in New York’s Washington Heights, Columbia’s new 14-story building doesn’t make scrupulous claims to efficiency, nor is its Lipchitzian mien particularly emblematic of any floor-area-ratio quantum. The building does a canny job of managing an elaborate program. DS+R, with executive architects Gensler, met the challenge of an incredibly compact footprint—just 12,500 square feet at the base—with great invention, packing in a suite of active-learning classrooms, mock examination and operating rooms, an anatomy lab, a special-events space, lounges, and even a 275-person auditorium. (The constriction of the site had one felicitous consequence: Corridors are shrunk to the shortest possible length.)

The pedagogic essentials eat up two-thirds of the floor area and are concentrated north of the elevator bank. They constitute a good chunk of a building mostly characterized by a prosaic boxiness. It is also where the bulk of the center’s technological hardware is housed, be it the pair of dummies equipped with digital larynxes and used for surgical and obstetric trials, or the obviously expensive, state-of-the-art interactive screens in every classroom.

There is a fair bit of technology embedded in the Anatomy Quad as well. Situated on the opposite end of the building, the large room has the charge of a sci-fi film set, with its vaguely menacing array of medical armatures, digital monitors, and cold metal tables on which rest cadavers (fresh ones are delivered at the start of every semester). The perimeter of glass is sheathed in translucent coverings that keep the room’s activities shrouded; they nonetheless admit plenty of daylight, which can only dignify the trepidatious poking, prodding, and slicing these corpses, magnanimously bequeathed by their former persons, endure. The hybrid provision of both the lab, with its clammy cadavers, and the simulation center, with its “feeling” simulacrum, attests to the architects’ and the client’s wishes to capitalize on advances in medical training. Whereas previously students were given a few stabs at techniques before being thrown into a clinical ward, now, at the Vagelos center, they are encouraged to hone them over a longer period of trial and error, their successes or failures streamed live to eyebrow-raised instructors and peers. 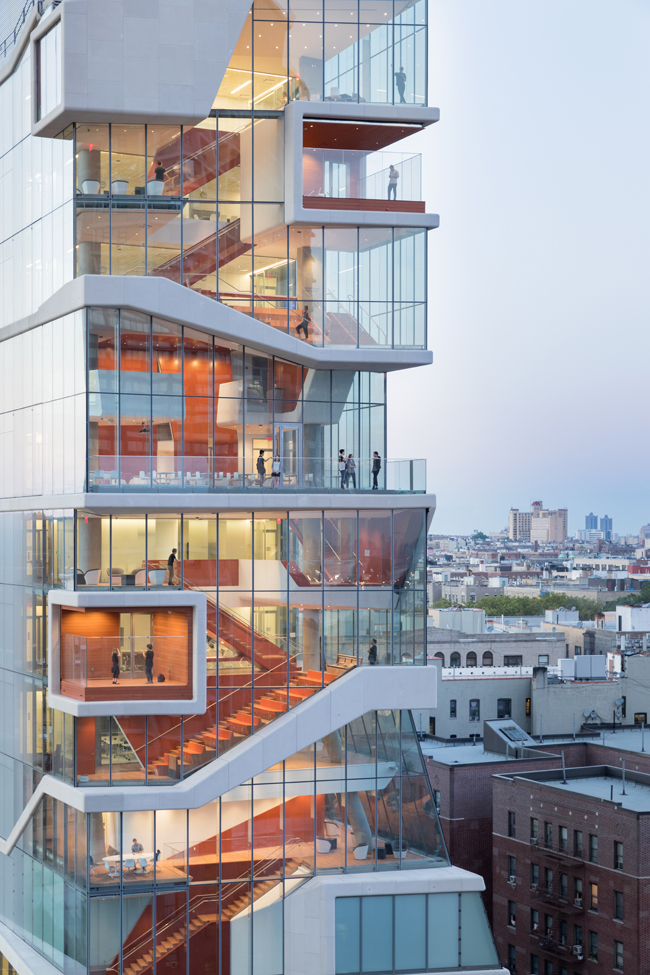 It’s a kind of praxis that has affinities with the world of tech and its cult of iteration, which is closely related to that other shibboleth of the age, collaboration. Here the building’s showcase, the so-called study cascade, comes into play as a dramatic stage for “the collaborative spirit of learning,” where “the students have terraces, outdoor spaces, natural light—all of that good stuff,” Diller says. There are wraparound views, too: stunning prospects of the skyscraper miasma to the south; the mighty Bridge Apartments that pick out the even mightier Cross Bronx Expressway to the northeast; and to the west, the Hudson River and the artful spools of the Henry Hudson Parkway. Some of the best sights can be taken in from the corner sky lounge, reserved for students and possessing the air of a start-up office. Tellingly, the architects gave it a bumptious shape and dubbed it the DustBuster.

Generous double- and triple-height spaces abound in the cascade, which accounts for the building’s last third. They are all traversable by stairs, whose circuitous course runs the entirety of the tower and provides the animating force for its jaunty southern facade. C-shaped boxes containing the terraces and sky lounge are daringly cantilevered and pierce the facade envelope, as if bobbing in aspic. The massive walls of insulated glass are angled this way and that, adding to the spirited composition—too spirited for some passersby, who have wondered aloud about the structural integrity of the thing.

From the sidewalk, it’s hard to wrench your eyes away from this cavalcade of form. It dictates that the visitor approach only from the south on Haven Avenue. The battery of clinker-clad five-floor walk-ups that line the minor thoroughfare, which leads to the medical school’s main campus, seem unfazed by the newcomer, jazzy exterior and all. Perhaps already accustomed to its high jinks, the neighbors—or rather, their dogs—seem more intrigued by the pocket park adjacent to the building. Working with the landscape firm SCAPE, the architects treated this lawned enclave like a remedial measure, as much an urban amenity as a necessary shield from the winds ricocheting off the river. There is even a crafty scheme in place to graft ivy along the sides of adjacent high-rises, mute twin sentinels poised at the edge of the site that could do with a dose of whimsy.

The cascade itself is a road map for DS+R’s aesthetic darlings. On the outside, its sharply angled fenders (bands of glass fiber reinforced concrete) contribute to the building’s lively, if not swaggering, urban manner that recalls Alice Tully Hall. Inside, the High Line’s voyeur-abetting architectural promenade has been flipped on its side, its bends and slants forming a thick circulation ribbon. The architects first hit on the undulating motif with the unbuilt 2004 Eyebeam Museum of Art and Technology, where the ground floor wiggled its way up through the building, seamlessly going from wall to ceiling and back to floor again. The renderings for that project depicted blank galleries tinted an awful cyan and augmented with virtual reality headsets, the design on the whole being caught somewhere between TRON and Gattaca. Realized at the new education center, the idea has attained a kind of Pixar futurism. Technological zeal has been tempered by an all-around friendliness, perceptible in the wonky apertures on the facade, and in the extensive splash of orange and warm Douglas fir accents on the interiors.

Pellucid and eager to please, the lean tower evidently offered the architects the chance to indulge long-held but thwarted notions of space, with the added benefit of the colorful program and an unbeatable site. They all converge in a genuinely thrilling building that, as well as any piece of architecture can, empathizes with its users, opening itself up fully to the heated discussions, studious recitations, or bumbling flirtations of student life. “You can never graft a heart into a building that was designed without room for one,” wrote the English critic Ian Nairn, as if diagnosing every medical facility in existence. At the Vagelos center, the core is technically the student commons, curiously slotted in on the tenth floor—a third of the way up because, according to Diller, that’s where you’d find the blood-pumper in the body of a snake. The metaphor isn’t necessary; DS+R has done its work well. There’s plenty of room for heart. 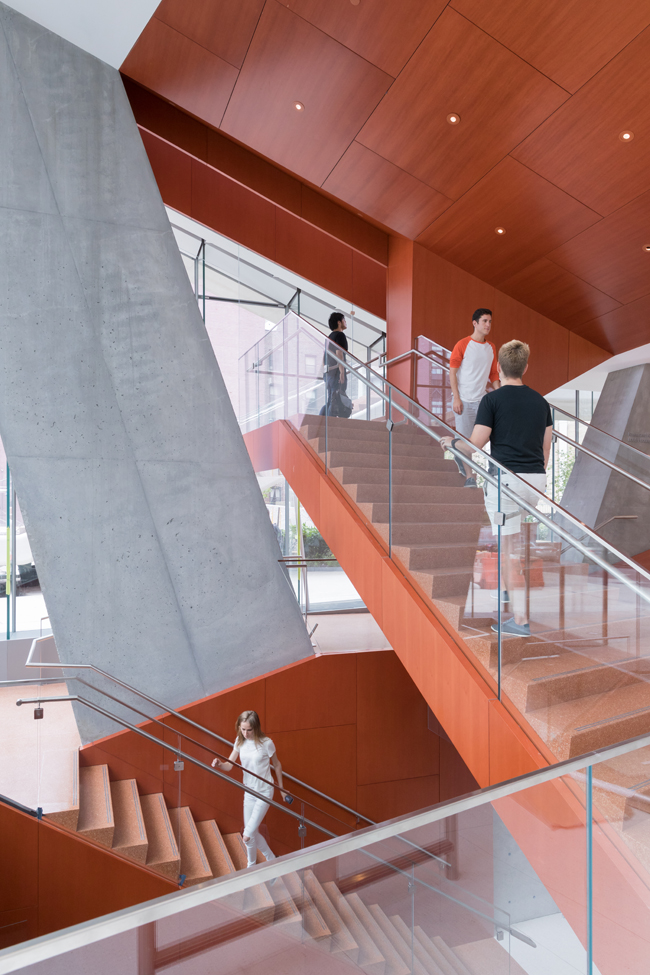 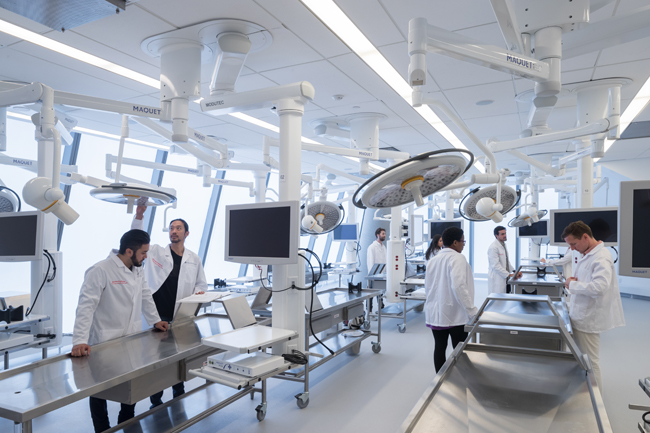 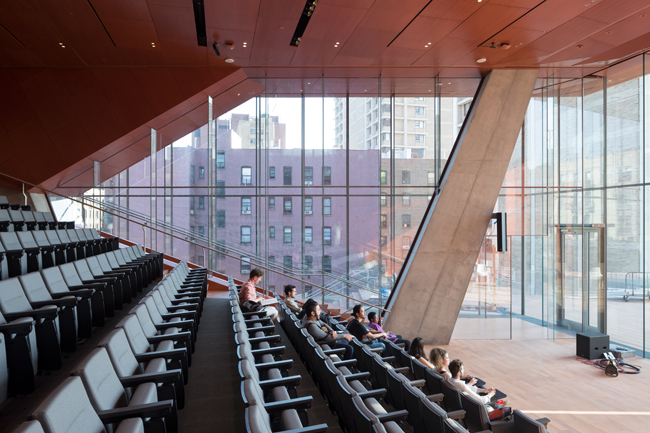 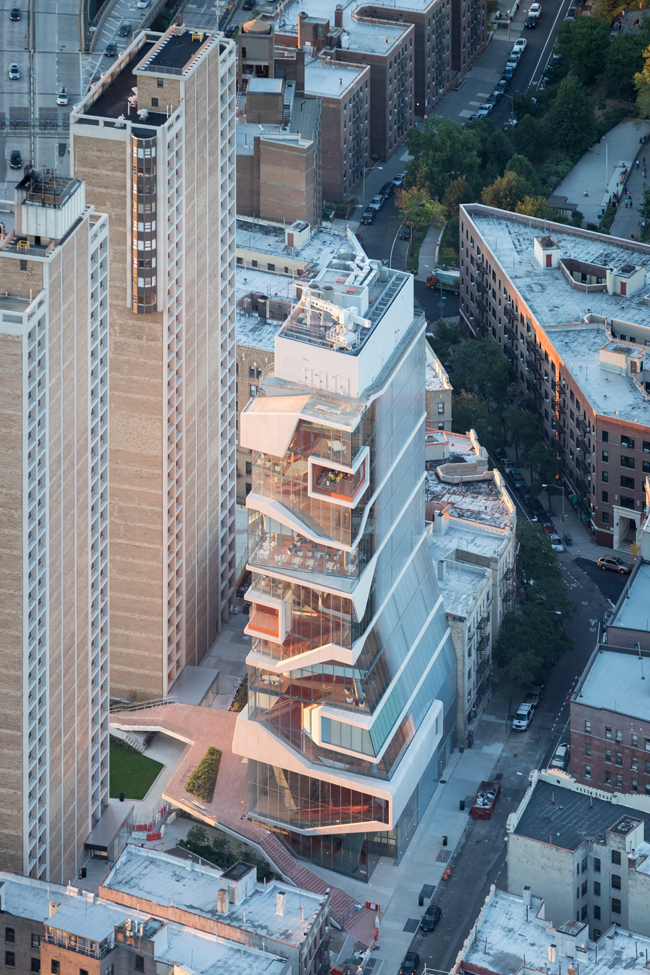