Designing the ultimate office space of the future

The international design competition, sponsored by HP and Microsoft, in partnership with the creative platform Talenthouse, was called the HP/Microsoft Smart Office Challenge. The challenge was nothing less than to design the ultimate office space of the future. No pressure. The only requirement was that the design had to feature existing HP technology. Our team won both the judges’ and the people’s choice awards. We are MulvannyG2 Architecture and industrial design firm Zac & Co., formed as collaborators on a design called HP MIMIC, a movable workplace that can be customized by touching a screen. With this design, users will be able to transform their offices to match their individual work styles and requirements, in addition to incorporating their company’s culture. Made of rigid aluminum and fully wired, the “plug and play” design features a collapsible system of rotating electrochromatic glass modules, controlled via a HP tablet interface. Last month, a prototype, built by HP, was presented at the Alt Design Summit in Salt Lake City. This animated video, created by MulvannyG2, illustrates the concept. Here Alan Feltoon and Zachary Feltoon – in real life they’re father and son – discuss their design process for the HP MIMIC, the rapidly expanding role of flexible technology in the workspace, and the importance of design competitions in pushing forward new ideas.

Alan Feltoon: Collaboration can be wonderfully messy, particularly when crossing disciplines, with the potential for creating big ideas and concepts. Our two firms had previously worked together on the Battery Park Conservancy Design Competition, “Draw Up a Chair.” Through that process we realized how well we work together and were eager to do it again. The HP/Microsoft Smart Office Challenge presented an ideal opportunity.

Zachary Feltoon: I found it fascinating how much the language surrounding various types of creative design can differ. At first, it was like having a multilingual charrette. We were using different terms, yet trying to get to the same place. But soon we progressed to conversations that would include all aspects of the user experience while also using other mediums to inform our own work. When you collaborate you open yourself up to new ideas, and in that regard you’re never working solely within your own medium.

Alan: True, the language is different, but it was fun working through that. I’ve been an adjunct professor at Pratt Institute, and have critiqued many different disciplines, including industrial design. Teaching has allowed me to be a multi-disciplinarian, so I liked the challenge of bringing these worlds together and looking for new possibilities.

Zachary: As an industrial designer, I’m generally focused on the user experience and his or her tactile interaction with an object. But in brainstorming with the team, we got into space planning, efficient movement, and the natural flow and interaction that occur in workspaces. These are things I’ve been aware of and have worked on, but I found it enlightening to hear the perspectives of interior designers and architects. We continue to formulate language to express the combination of industrial design and interior design, and moving it from a human scale to something larger.

Alan: It also widened the conversation about the workplace in general. For me, this competition was a chance to work with a team of diverse talents that, along with Zachary, included about 10 people from my firm, representing three different generations. The younger people brought drive and energy and I tried to add some perspective based on my experience.

Zachary: I think that’s why it worked so well. The team ranged from Baby Boomers to Millennials, much like many corporations and businesses today. For the competition, we needed to offer solutions that fit a wide range of working styles and technological preferences. Rather than have a different design for each group, we created one system dynamic enough for users to adjust to their own needs. I think we made the right call.

Alan: The discussions about how people interact with technology were really interesting.

Zachary: I agree. This was also reflected in how we worked on this project. Our design process literally mimicked the product we were creating, just as the ideal workspace should mimic how people actually work. My company is based in Brooklyn and the MulvannyG2 team is in D.C., so we used Skype, Drop Box, and some open source tools to share sketches and ideas in real time. This is similar to what many businesses are doing, so our process was relevant to real world applications. Now I walk around with my office in my bag, so I’m used to seamless technological connectivity. Part of the idea was to scale up that concept. 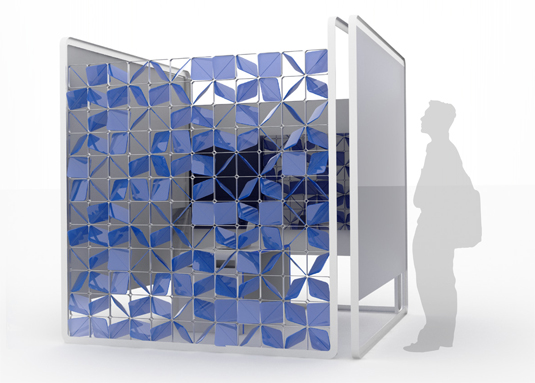 Alan: The workspace should conform to people, not the other way around. It should carve out spaces for people to personalize according to their needs. Creating a physical manifestation of the modern work environment was a challenge. Since we can work anywhere – anywhere – home, car, coffee shop, park bench – it doesn’t make sense to create costly spaces that are empty much of the time. Think of costs like real estate, utilities, and furniture.

Zachary: And that gets to the idea of work itself. It’s really about the exchange of ideas. Alan: Or should be! The workplace should be a place to share ideas and collaborate, not just a space to churn out emails and “do” work. The space should encourage and enhance creativity, and ultimately, productivity. Thanks to mobile technology we aren’t tied to a place anymore, but the need and desire to collaborate remains. So the question becomes, how can we use technology to create better collaboration, and ultimately, better ideas?

Zachary: It really comes down to communication. During the design process on MIMIC, I grew to appreciate how our conversations with the team helped us look at all space within an office as usable space. The office kitchen, for instance, can be more than a place to eat or fill your coffee mug. It can be an informal conference room if designed right. What happens in the negative space surrounding desks can be as important as what happens at the desk itself.

Alan: And an office is much more than a place to set your laptop. This is part of an evolution from cubicles to mountable wall systems to something like the MIMIC, which is a stand-alone, scalable system. I don’t need a designated desk; I just need space that serves my needs wherever I am. This is particularly helpful for international firms like mine. I can go to Shanghai and be instantly familiar with the space I’m working in. That brings up the importance of competitions like this one, and why both of our companies embrace them. It’s critical for an architecture firm to invest time, effort, and money in such competitions, and especially great when you win, of course. But the R&D value is enormous regardless of outcome. Ideas that may be ahead of their time do help to drive things forward, especially when you have giants like HP and Microsoft behind them.

Zachary: Part of the goal is to use technology that’s on the cutting-edge yet transparent. In fact, part of what makes it so great is the transparency and seamlessness.

Alan: Something that helps people to manage space and time on their own terms — and not just so we can work more, but to improve quality of life.

Zachary: So it’s less about creating the “office of the future,” than about giving people the ability to create their own scalable and customizable offices. It’s about giving people options. All of which has served us well, especially as we get further into the next design competition together.

Alan: Like any creative endeavor, it’s an ongoing process.

Alan Feltoon, AIA, AICP, LEED GA, NCARB, NCIDQ, is the managing principal of MulvannyG2’s Washington, D.C. office. He has more than 35 years of experience in practice management, business development, architecture, interior design, and city planning. He is an adjunct professor in the Department of Interiors of Pratt Institute, and serves on the Interior Design Advisory Board of Moore Art College.

Zachary Feltoon is an independent industrial designer based in New York City. His company, Zac & Co., specializes in commercial furniture design and product development. Along with his own products he has consulted on design for clients such as SuperTouch NYC, GroupMe, and West Elm. Zac & Co. focuses on design for the new workplace and integration of technology into the built environment.