A New Social Primer for Practice and Projects

What happened in Denver did not stay in Denver. This was the case for the 2013 American Institute of Architects (AIA) National Convention held in that Colorado city. Instead, after the convention was over, the ideas stayed on Twitter, Facebook, and other social media platforms. What I witnessed in Denver was a groundswell in action, described by Forrester Research as “a spontaneous movement of people using online tools (social media) to connect, take charge of their own experience, and get what they need–information, support, ideas, products, and bargaining power–from each other.” It answers a universal emotional need to connect, communicate, and create within the architecture community.

A the 2011 convention, I presented the session, “How To Leverage Social Technologies For A Sustainable Practice.” My drive home message was about building communities, connecting within business-to-business companies, and less about the need to control conversations. At that time, few architects had adopted social media, yet some realized that “We don’t have a choice on whether we do social media, the question is how well we do it,” as Erik Qualman, author of Socialnomics, puts it.

Today there’s an increase in architect-adopters and those who have become fluent in this online language. Yet this involvement doesn’t directly solve design-related problems, as I told the International Interior Design Association (IIDA) during their 15th Industry Roundtable. Social media does add another dimension to make communication lines accessible to everyone on a project team. Such conversations among team members are critical because they are able to share information with each other that contributes to the development and success of projects.

Wouldn’t it be great if there were a social media platform that can drive conversations unique to architects, consultants, specifiers, and building material manufacturers at the forefront–freely allowing each one to go past communication silos, to become more in-clusive in project collaborations? KINetic might be the answer.

KINetic is the first and only social media program that goes beyond traditional platforms. It is created specifically for architects and design professionals. “The early seeds of ideas for the concepts behind KINetic were planted and validated through feedback from designers and architects,” notes Andrea Peters, director of marketing at Kingspan Insulated Metal Panels, one of the initiators of KINetic as well as other initiatives that engage conversations among architecture students, academe, and professionals. 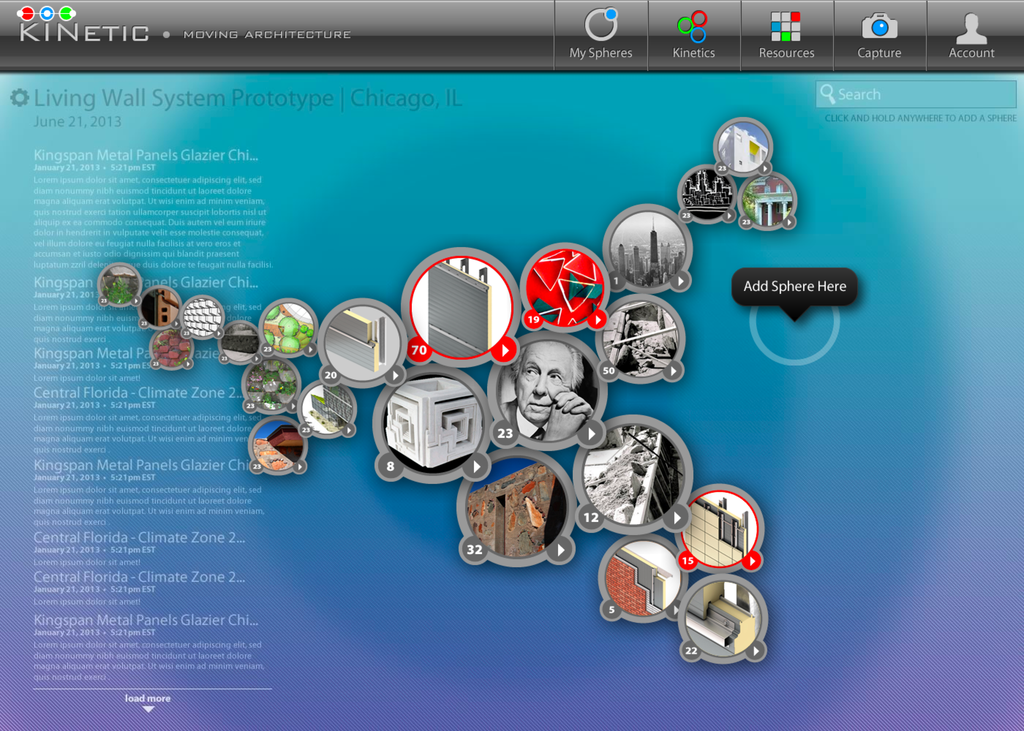 I had the opportunity to beta test KINetic on my own project, a Living Wall System, which I presented at this year’s AIA National Convention Expo Hall. Here I experienced, what Jerry Eisen explained as the merits of KINetic’s core concept: “Design professionals will be introduced to powerful and functional ‘Spheres of Influence’.” Eisen is vice president of Think Agency, who’s working with Kingspan on KINetic, which richly integrates the sourcing and collaboration capabilities of established social media with project-specific, user-generated collateral while helping users build communities, facilitate collaboration, and visually prioritize project related content.

As a web-based content delivery tool, KINetic reminded me of a fusion between Pinterest, Facebook, and Twitter. It has the pinboard-style capability referred to as “spheres.” This provides visual inspiration during a project’s discovery phase and technical informa-tion during its design phase. If I compare its “spheres of influence” to Facebook, it is the equivalent of News Feeds where factors like number of comments and “likes,” who posted the information, or what type of information it is, would determine the influence it’s having on the project. This is represented by the visual growth of the “spheres.” It is the meeting of visual stimulation and powerful crowd-sourcing concepts. 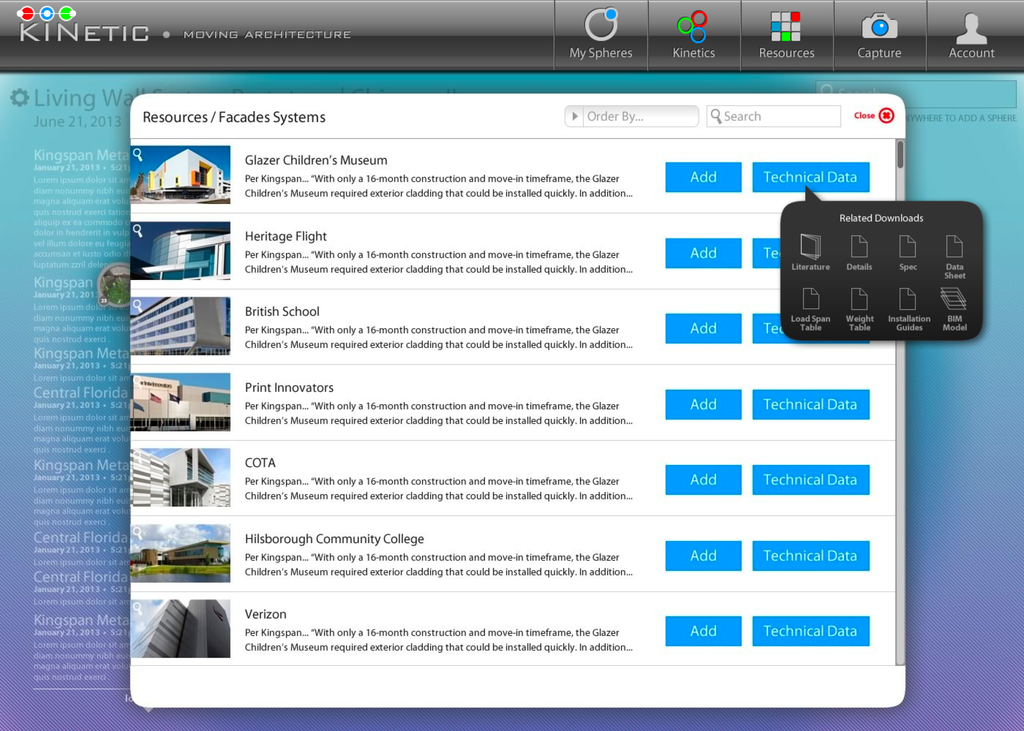 Imagine working on a project where you can engage an audience on all or several specific aspects of its architecture and get an almost instantaneous feedback that will help in either the design decision-making process or get a feel for how people would react once the building gets completed. It’s also like Twitter in the way that it allows users to connect to what’s most important to them by way of “spheres I follow.” 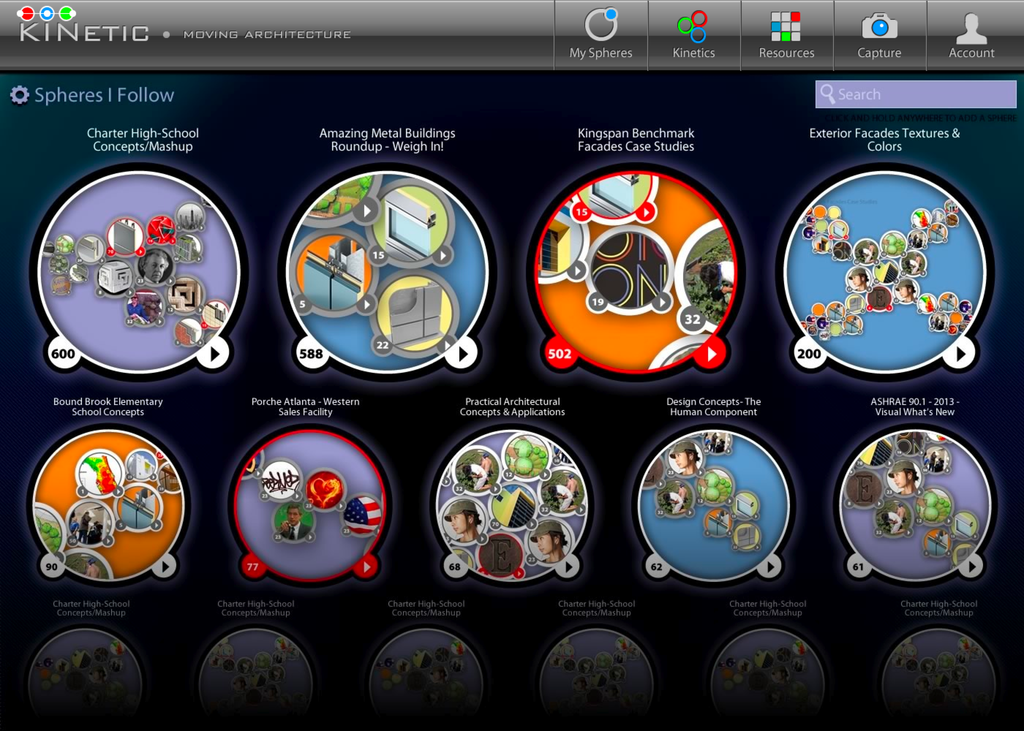 Probably one of KINetic’s most useful feature is “resources” where technical data is de-livered as microblogging downloads in the form of literature, details, specifications, data sheets, load span table, weight table, installation guides, and BIM models of products.

The force of motion moves on a mid-fall launch for KINetic this year. Remember, what happens in KINetic, could go beyond Twitter, Facebook, Pinterest, and other social media tools architects and designers currently use. And this may prove to be a true break-through in how we communicate with each other.

Lira Luis, AIA, RIBA, NCARB, CeM, LEED AP BD+C is chief collaboration architect at ALLL in Chicago. She is also a certified electronic marketing professional. She demon-strated her competency and leadership in electronic marketing in the architecture, engi-neering, and construction industries that contributed to winning Curbed’s Hottest Archi-tect online contest in 2011, successfully funded a project supported by online micro-funders in Kickstarter, and authored two of the most read posts in the American Institute of Architects (AIA) KnowledgeNet blog.